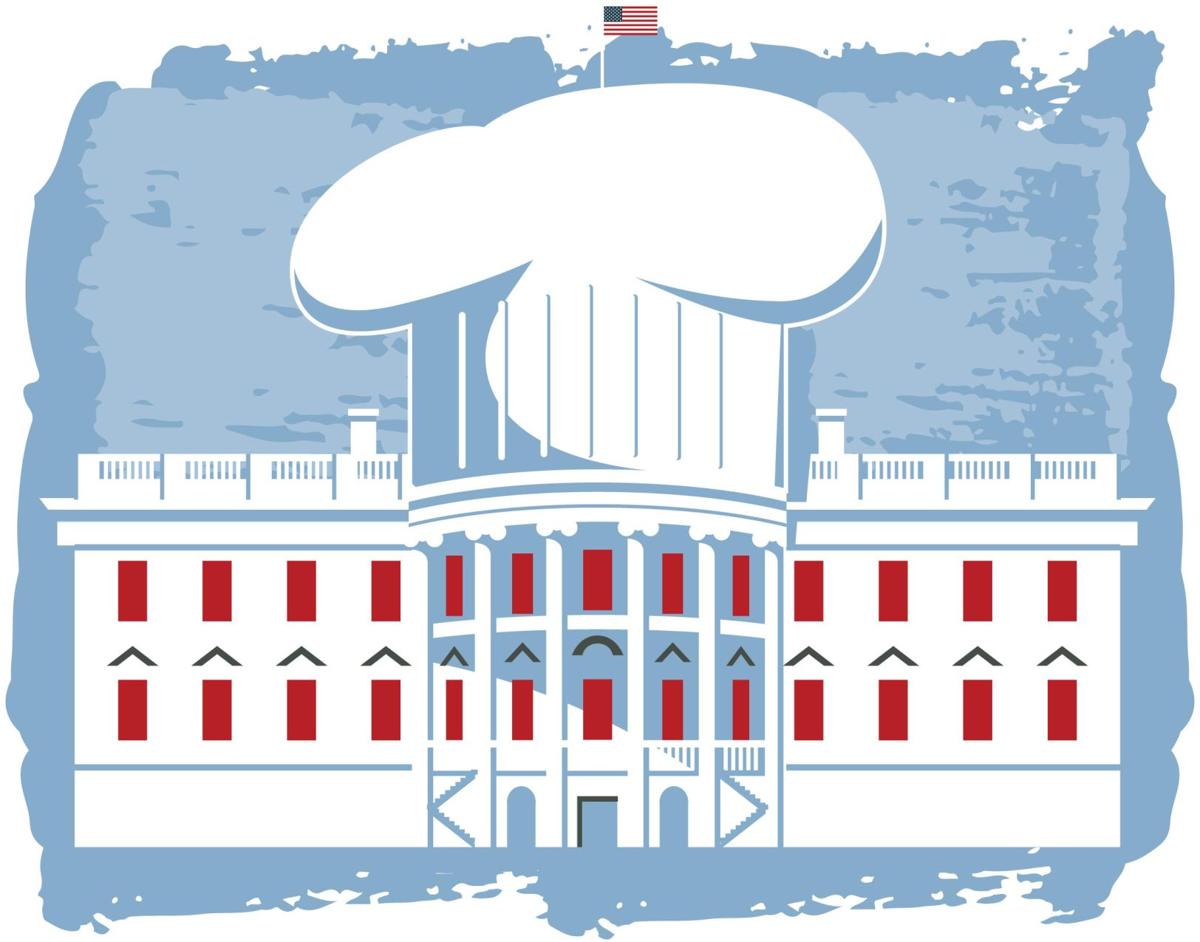 Our chief executives have enjoyed a variety of favorite foods over the past 2 1/4 centuries. 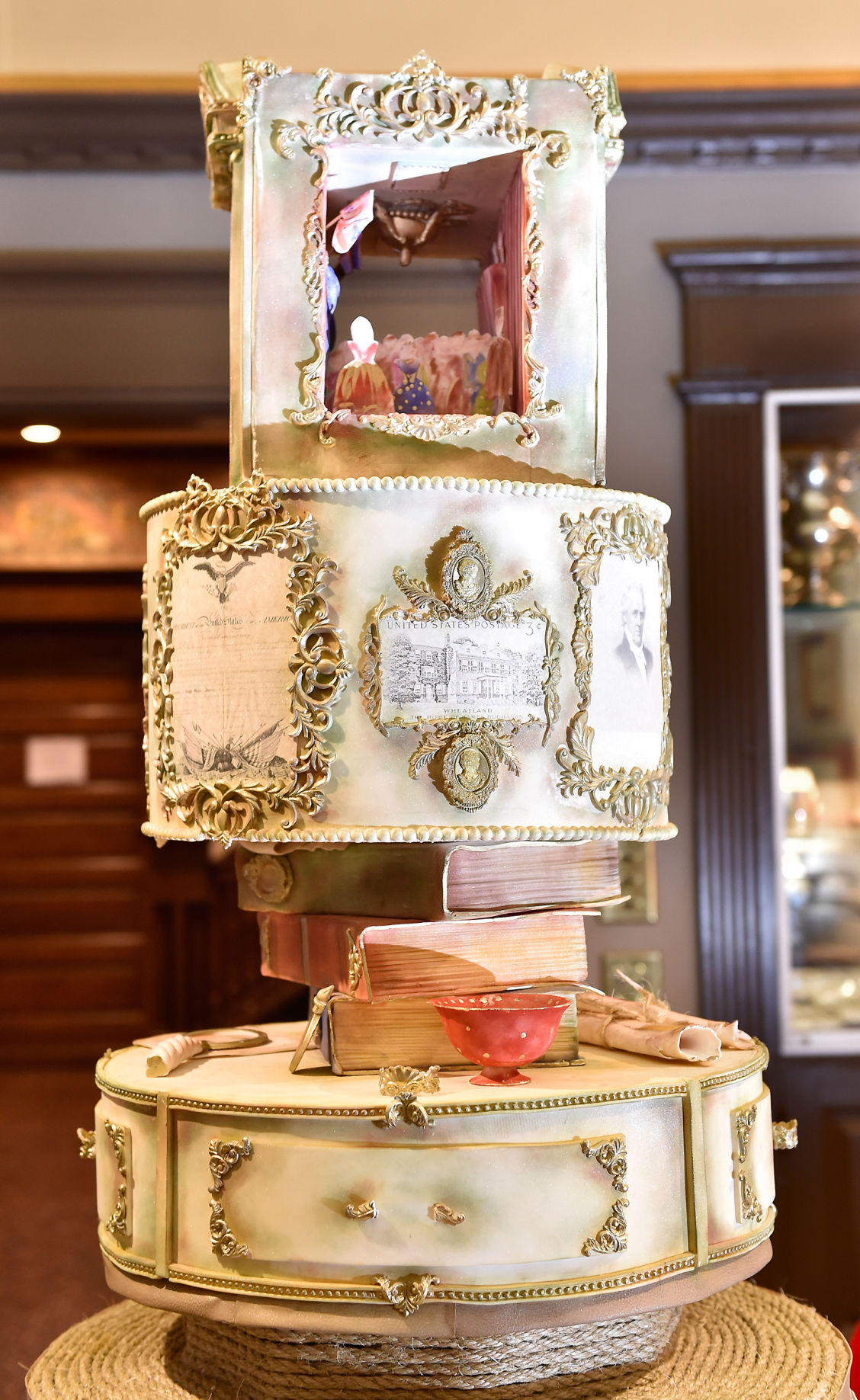 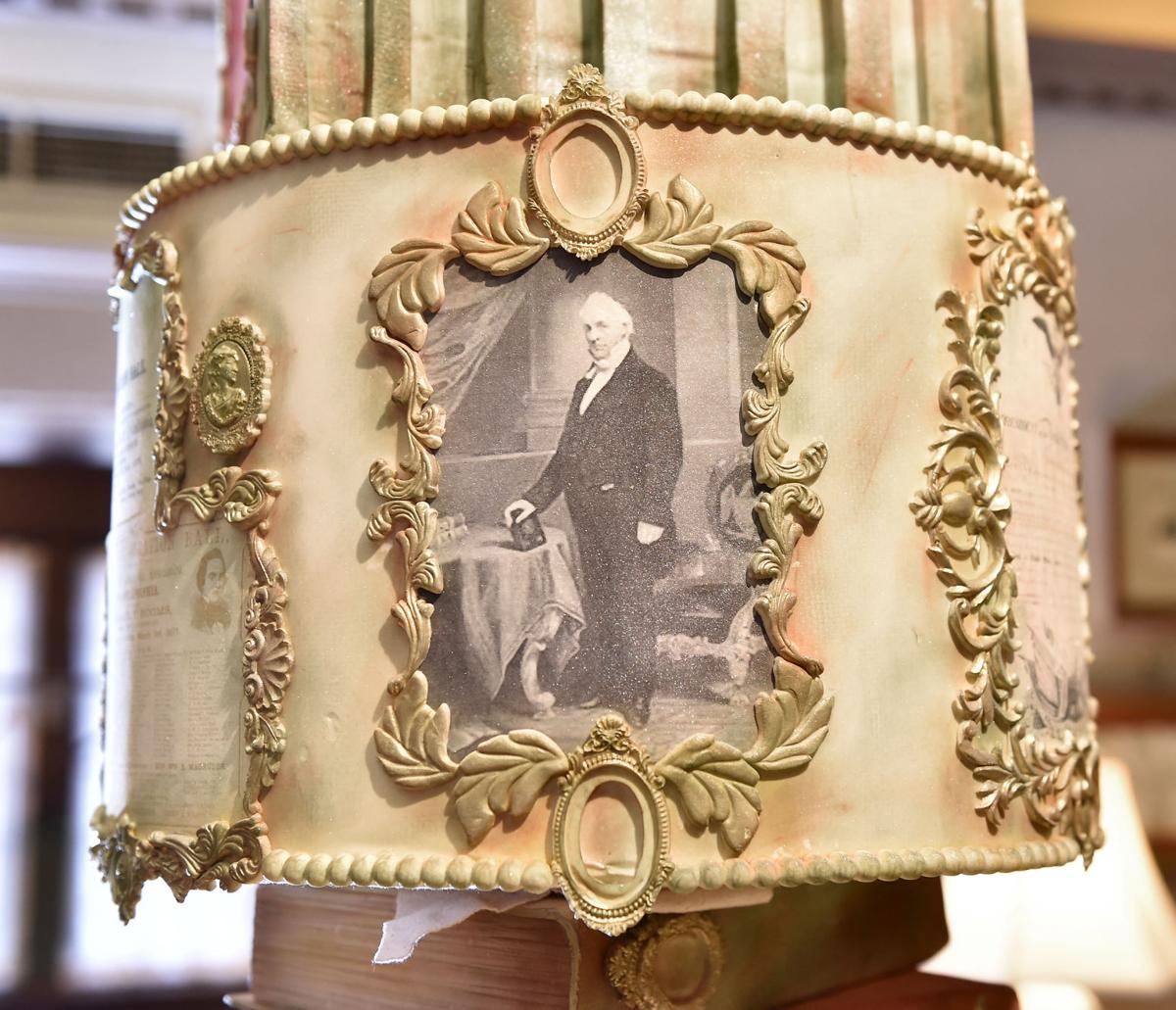 A photograph of James Buchanan is part of a multi-tiered cake, created for LancasterHistory.org's gala by La Petite Patisserie in Lancaster, that will be on display at Wheatland. 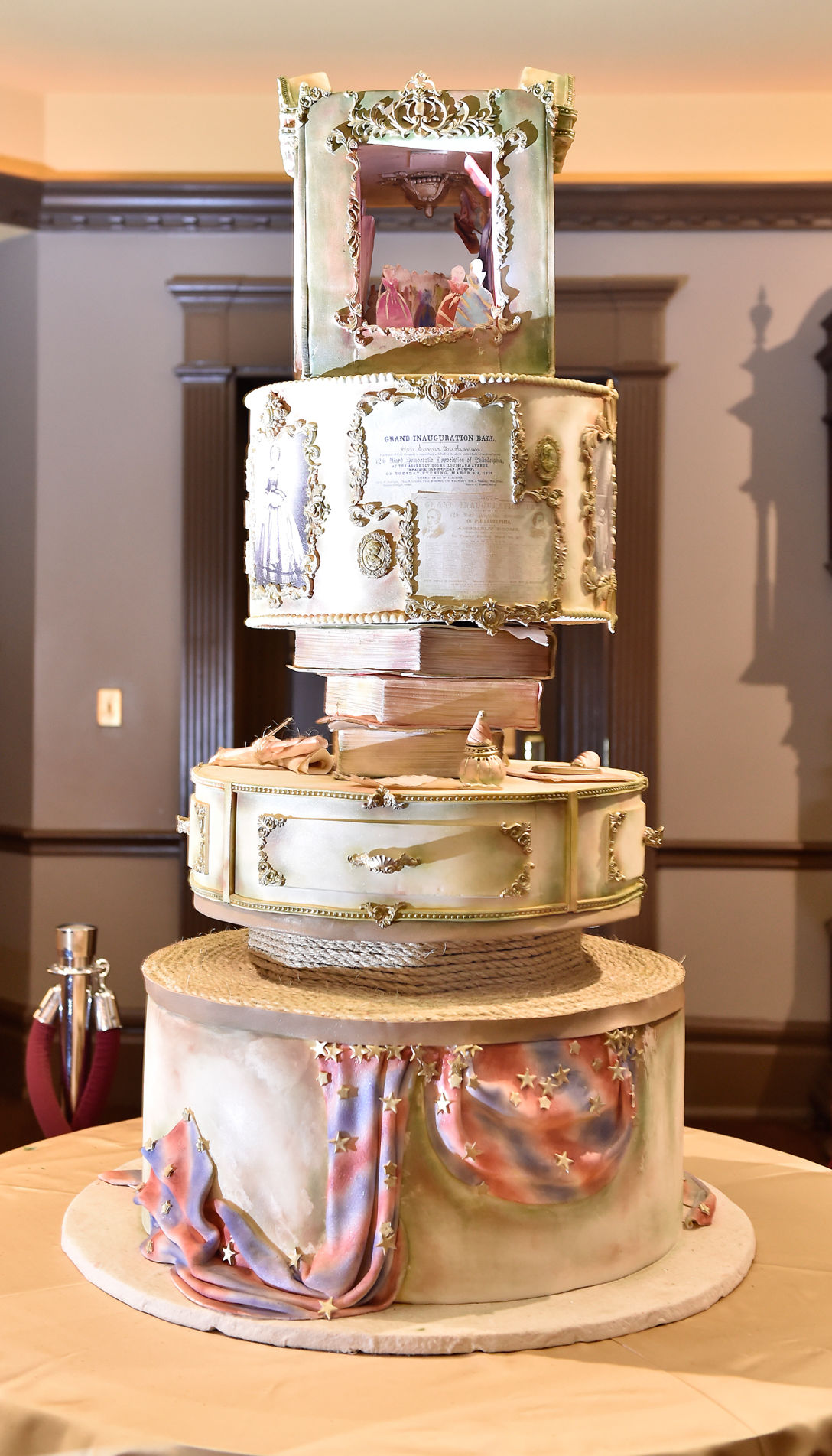 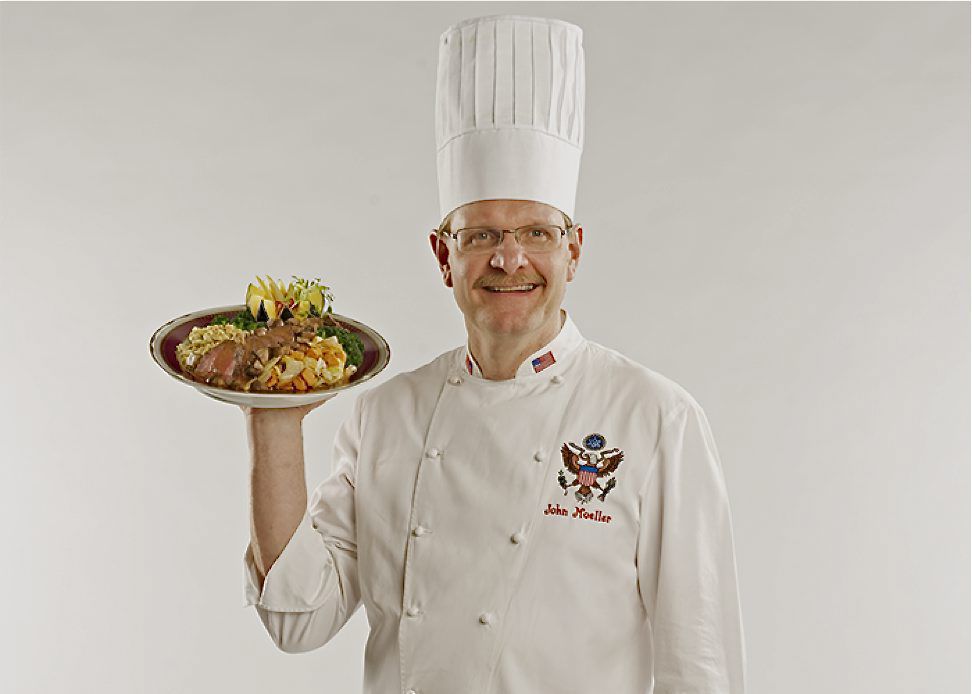 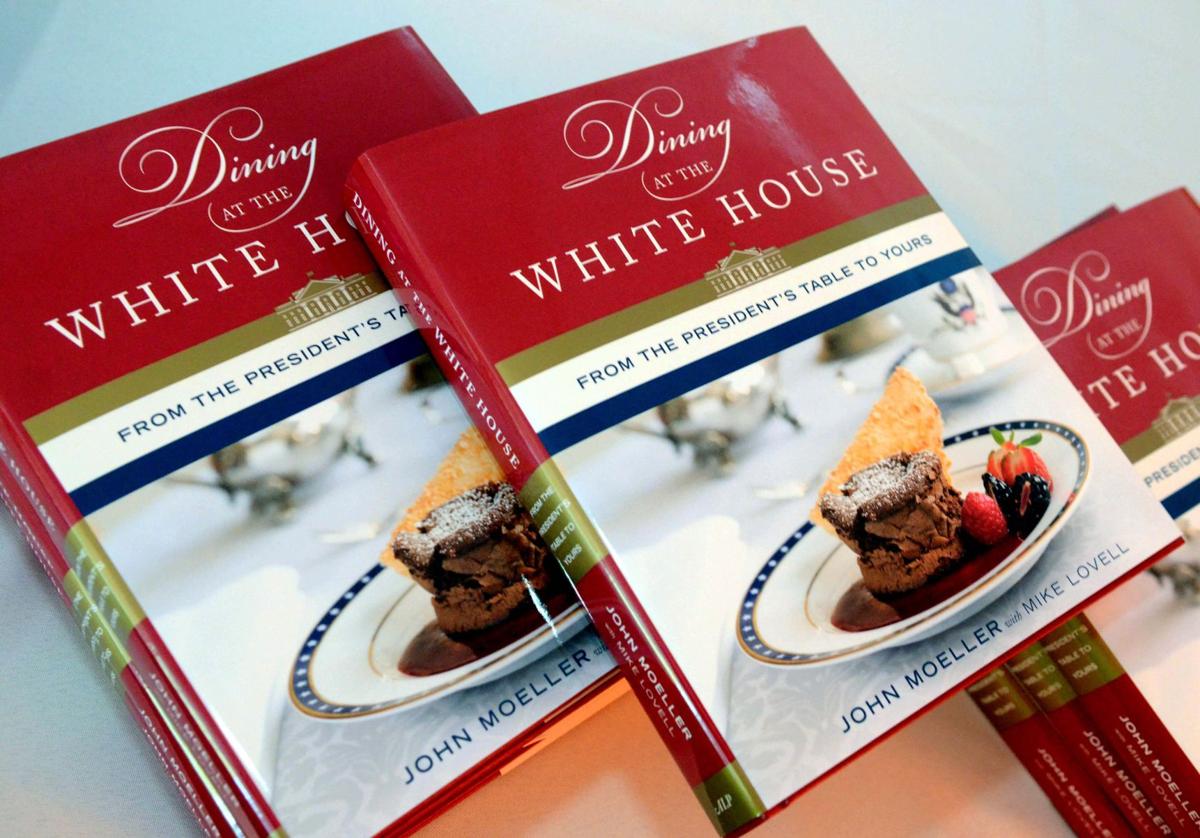 Chef John Moeller's book is "Dining at the White House — From the President's Table to Yours."

Our chief executives have enjoyed a variety of favorite foods over the past 2 1/4 centuries.

Chef John Moeller's book is "Dining at the White House — From the President's Table to Yours."

Editor's note: This article was originally written in February 2017. Since then, John Moeller has become the chef-owner of The Greenfield Restaurant & Bar in Lancaster, and La Petite Patisserie has relocated to 621 Harrisburg Ave.

Presidents of the United States, including Lancaster’s own James Buchanan, enjoyed eating a variety of different foods during their time in office.

Some favored simple foods in their daily life as a contrast to what they might have eaten at state dinners or their own inaugural celebration meals.

With Presidents Day coming up on Monday, some people who know what presidents of the past liked to eat recall those favorite dishes of our chief executives.

“He talks about it in at least a couple of different letters,” Clarke says.

In one letter inviting a friend to Wheatland for dinner, Buchanan wrote that he was “so glad that you, too, enjoy that simple, yet delicious dish of German sauerkraut,” Clarke says. “He adds that his housekeeper, Miss Hetty Parker, makes the best he’s ever tasted.”

“That’s understandable, with Lancaster’s geographic positioning so close to the (Chesapeake) Bay,” he adds.

“We have physical evidence on the property of a lot of oysters consumed, and he also enjoyed clams,” Clarke says.

“As far as his beverages are concerned, he loved Madeira wine, which was a common favorite of people of his socioeconomic status.” Clarke says. “He was a collector of Madiera wine.

Buchanan suffered from gout at the end of his life, Clarke says, and therefore wasn’t imbibing as much as he had when he was younger.

Buchanan had more than 200 cases of wine in his collection when he died, Clarke adds.

Buchanan’s inaugural ball, and the food served there, were remembered at last weekend’s LancasterHistory.org Valentine’s Day fundraising gala at the Hamilton Club in Lancaster.

“What we have is a description of the (Buchanan inaugural) menu,” Robin Sarratt, vice president of LancasterHistory.org.

Hamilton Club Chef Kevin Anderson adapted the gala’s menu from some of the dishes served there.

A filet of beef with “Miss Hetty’s Madeira wine mushroom sauce” was served Saturday night, along with potatoes and a root vegetable medley.

Sarratt says lots of oysters were served at the inaugural meal, as well.

Unfortunately, Clarke says, Buchanan barely got to enjoy the meal at his own inaugural celebration.

“He had stayed at (a hotel) back in late January of 1857, which was about a month before his inauguration day of March 4th,” Clarke says. “A lot of people who had been staying there and eating meals had been getting ill, with some sort of mysterious illness ... similar to dysentery, “ Clarke says.

He was still sick at the end of February, and refused callers at Wheatland in order to recover, he adds.

“Buchanan really made only a showing of his face at the inaugural ball. … he really did suffer quite a bit,” Clarke says.

At Saturday’s gala, there was also a spectacular cake inspired by the 15th president’s inaugural, courtesy of Lancaster’s La Petite Patisserie bakery.

“LancasterHistory contacted us around mid-November, and they wanted us to do a display cake for their gala,” says Donna Lussier, owner of the bakery on North Prince Street.

“The cake had to be 4 feet tall, it had to have an inaugural theme, with a period feel and had to incorporate James Buchanan,” Lussier says.

“It was a long thought process,” she says. “Until we had more than 100 man hours put into that cake.”

“We really gave them free rein to adapt to the theme,” Sarratt says.

“My incredibly talented cake decorator, Milana Yarmolich … did a lot of research,” Lussier says. “She went to Wheatland and took a tour.

“The cake was meant to be walked around and looked at from every angle,” Lussier says.

“The bottom tier has waves of the (American) flag going around it, and some stars,” she says. Materials of the period, such as leather and rope, are represented above that tier.

“The next tier is a desk, with four drawers going around it with pulls and everything,” she says. “On top of that is a feather pen, a magnifying glass, some postcards — things that might have been sitting on (Buchanan’s) desk.

“On top of that are a copy of the original inaugural invitation, and different photos of James Buchanan and other people,” Lussier says.

The cake is being moved to Wheatland, where it will be on display for visitors, Lussier says. Because the cake was made for display only, it can last a long time as long as it is kept out of the sun.

“The inside is the structure and the outside is fondant,” Lussier says. “There’s no real cake inside.

Contemporary presidents have had varied culinary tastes, says John Moeller, who was a White House chef during the presidential administrations of both George H.W. and George W. Bush, and Bill Clinton.

Moeller, who runs State of Affairs Catering in Lancaster, is the author of the cookbook “Dining at the White House: From the President’s Table to Yours.”

Moeller says the three presidents he cooked for watched what they ate during daily meals at home.

“They were all very healthy eaters when they were eating by themselves in the residence,” Moeller says.

Because they had to eat high-calorie foods at state dinners and while traveling, Moeller adds, “they liked to throttle back a bit at home.”

George H.W. Bush enjoyed eating fish and seafood, including lobster and oysters, Moeller says. He didn’t like his fish poached, however.

“A piece of grilled swordfish or salmon was always a very welcome thing to him and the first lady,” Moeller says.

“One thing that became a favorite of President Clinton, that he absolutely loved, was my chicken pot pie, Lancaster County style.

“George W. Bush liked it, too,” he says. Moeller recalls that each one looked up at him over the tops of their glasses while they were trying the pot pie for the first time and gave him the thumbs-up sign, telling him it’s the kind of dish they liked to eat.

“Both of them also liked my fresh-made chicken enchilada … with pinto beans and rice,” Moeller says.

“George W. Bush loved filet mignon. Steak was his favorite,” Moeller says. Moeller remembers one time Bush was eating by himself and cooked him a piece of filet with a light sauce, some potatoes and corn. Moeller says the butler came back to the kitchen laughing and told him, “I put the plate down in front of him, and he looked across it and said, ‘There’s nothing green on the plate. I like it!’ ”

“Every once in a while, he’d look at the dessert that had been made by the pastry chef,” Moeller says, “and he’d say, ‘Hey, John. Give me a bowl of that ice cream.’”

How to make your own fasnachts, plus readers share Fasnacht Day memories

With Ash Wednesday just days away, it’s a good time to make sure your calendar is complete w…

Here's how Ash Wednesday will be different this year

In April, a new stand will open at Lancaster Central Market with prepared vegan and vegetari…

In honor of the upcoming Valentine's Day holiday, we asked our readers to share their most c…

Here’s what culinary historians say are some

of the foods U.S. presidents liked to eat.

• Chester A. Arthur: A mutton chop with a glass of ale or a slice of rare roast beef with fruit and hot baked potatoes.

That’s according to Frank Leslie’s Illustrated Newspaper, in the collection at LancasterHistory.org.

This recipe, a cold-weather favorite of presidents Bill Clinton and George W. Bush, comes from John Moeller, former White House chef and author of “Dining at the White House: From the President’s Table to Yours.” Serves 8, dinner portions

Place chicken in soup pot and cover with cold water. Add the carrots, celery, onion, garlic, bay leaves and peppercorns. Bring to a boil, and then reduce heat to a simmer for 1 1/4 to 1 1/2 hours, skimming impurities from the top throughout.

Remove the chicken from the stock, split in half and let cool on a sheet pan for 15 minutes. Remove meat from carcass and set aside.

Return the bones to the simmering pot of stock and cook for one hour.

Tear the meat into medium-large pieces and reserve.

While the stock is cooking, prepare the dumpling dough. In medium bowl, combine flour and salt. Add eggs and mix until a soft dough forms. Wrap dough tightly in plastic wrap and place in the refrigerator for at least an hour.

Strain stock through a fine mesh strainer, return to pot and keep at a simmer. Discard solids.

Remove dough from the refrigerator. Dust work surface and rolling pin with flour.

Using a pizza cutter, cut the dough into 1/2-inch to 2 1/2-inch strips of dough. Individually drop dough strips into simmering stock and cook for about 10 minutes.

Sweat vegetables for 4 to 5 minutes.

Stirring constantly, sprinkle flour over the sweating vegetables and mix well. Add the stock with dumplings, stirring until well incorporated. Return to simmer, stirring occasionally, for about 10 minutes or until mixture thickens slightly.

Season with salt and pepper. Stir in reserved chicken and peas and simmer until heated through.

Fresh biscuits go nicely with this dish as well.

It can be found in the White House archives from President Barack Obama’s administration.

salt and pepper to taste

Toss the vegetables in olive oil and salt and pepper. Grill until softened but still a bit crunchy. Set aside.

Flatten the pizza dough until about 1/8 inch thick. Brush with olive oil.

Season with salt and pepper. Grill on both sides for about 2 minutes on each side.

As President Bush is laid to rest this week, his former White House chef remembers an "unpretentious" man who held the nation's highest office.