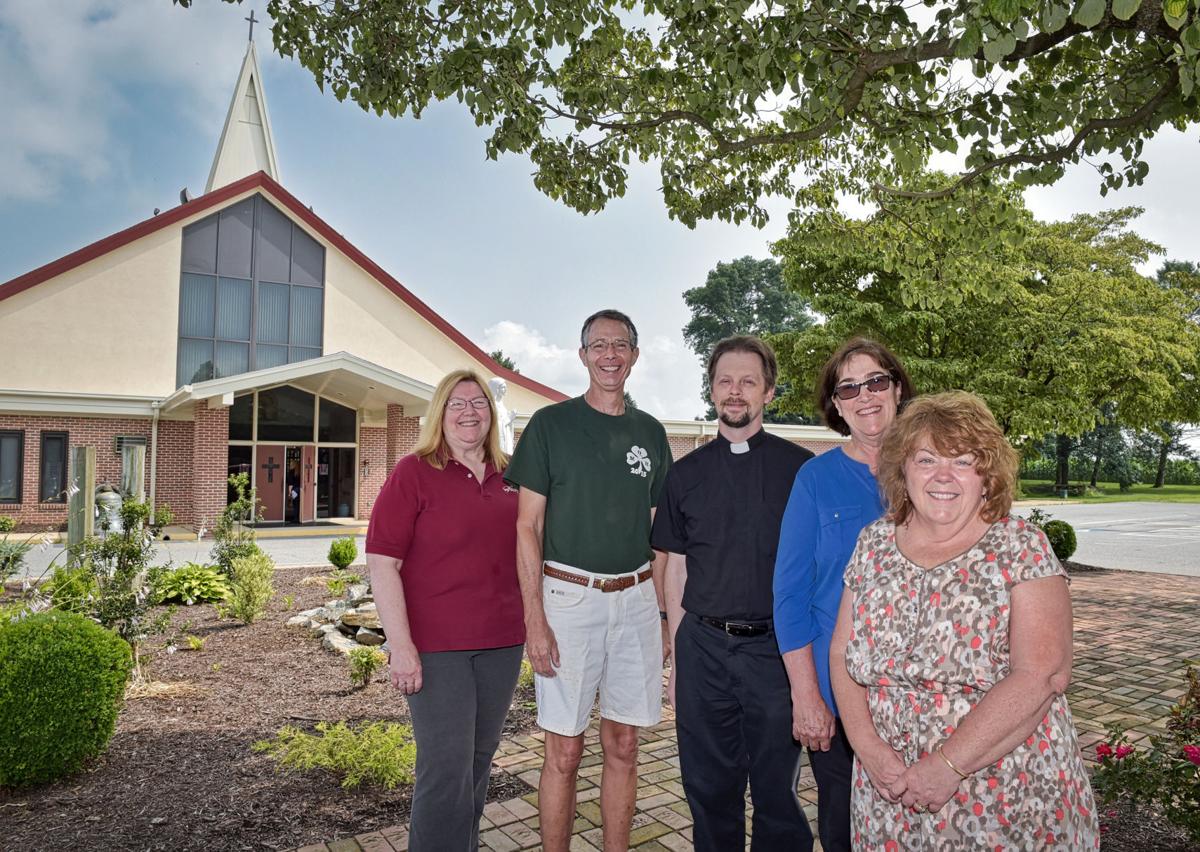 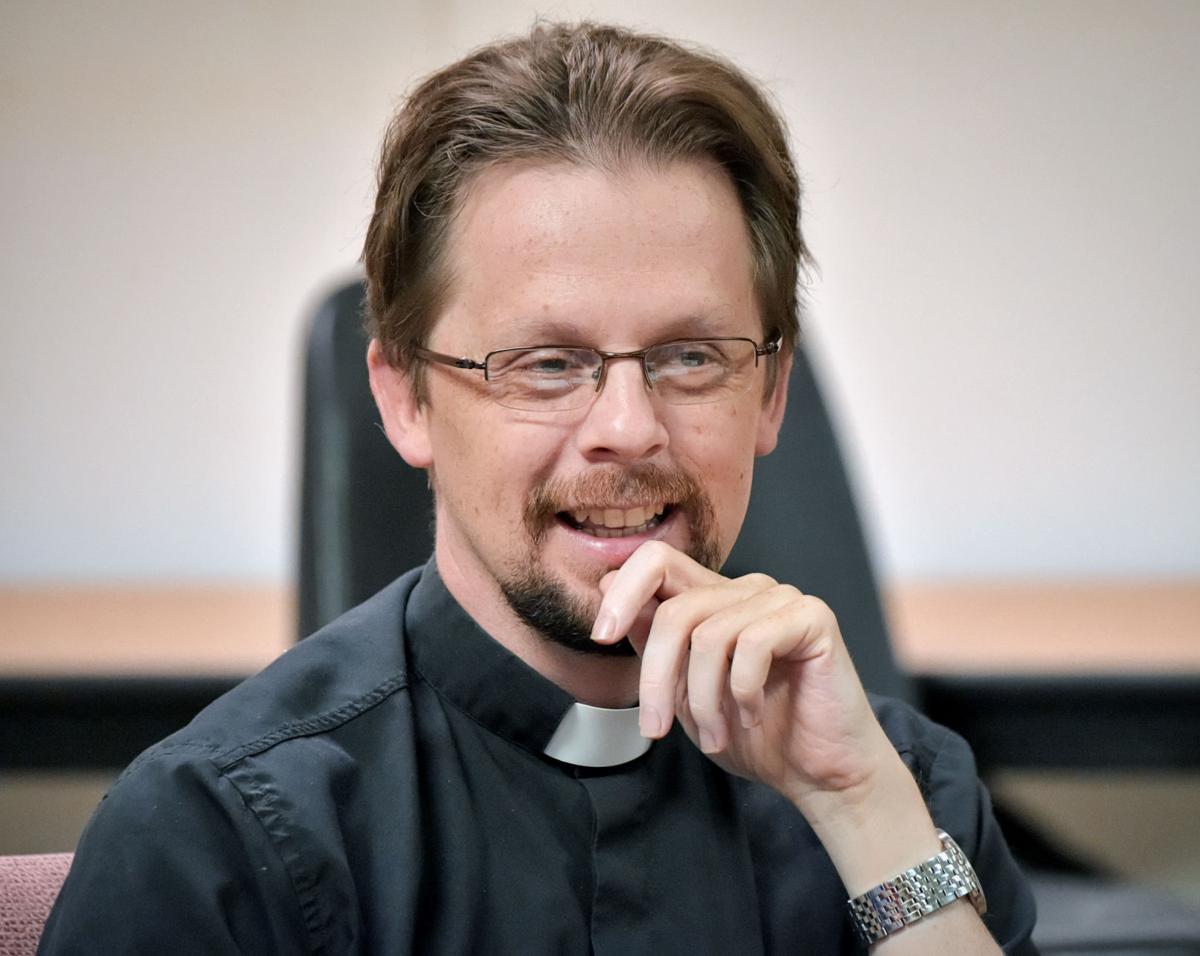 Rev Steven Fauser. Members of Our Lady of Lourdes Catholic Church. The church will celebrate its 100th anniversary in July. Tuesday, July 9, 2019

That year, Catholics in Lititz purchased their first church. In New Holland, the inaugural Mass of what would become Our Lady of Lourdes Catholic Church was held.

On Saturday, July 27, Our Lady of Lourdes will host its Centennial Celebration Mass with Bishop Ronald W. Gainer presiding. The Mass begins at 5 p.m. and will include a number of pastors who previously served the church. A gathering in the church’s Parish Center will follow the Mass.

“It’s exactly 100 years since the first Mass that was said in New Holland for our parish family,” said Yvonne McGee, a member of the church’s centennial committee.

Church member Karen Smith-Kernc said the occasion “shows a long-term commitment and an investment by the community into the church.”

That first Mass marked the beginning of a parish that has flourished. Although early records show only a handful of Catholics living in the area, today more than 500 families consider Our Lady of Lourdes their home.

The story of the church is one of missions, ministries and growth over the past century.

Our Lady of Lourdes, Our Mother of Perpetual Help in Ephrata and St. James Catholic Church in Lititz were all begun by Redemptorist missionaries.

The term Redemptorist is a shorter term for the formal title — Congregation of the Most Holy Redeemer or, in Latin, Congregatio Sanctissimi Redemptoris.

The Redemptorists, based in New York, had come to Ephrata at the bequest of the Diocese of Harrisburg to establish mission churches in Lancaster County. Our Mother of Perpetual Help was established in 1914, followed by St. James in 1917 and Our Lady of Lourdes in 1919.

“At their high point, (the Redemptorists) were at Lititz, New Holland, Ephrata and at St. Anthony’s in Lancaster,” said the Rev. Steven Fauser, priest at Our Lady of Lourdes.

On July 27 of that year, the Rev. William White, accompanied by a combined choir from St. Mary’s and St. Anthony’s Catholic churches in Lancaster, conducted the first Mass in New Holland. It was held on the second floor of the Witwer Building, which he named St. Rita’s Chapel.

In 1920, the chapel was moved to the roomier third floor of the building and the chapel was dedicated to St. Therese of Lisieux — the Little Flower of Jesus.

In July 1940, ground was broken for a new church on land that had been donated by the Lewis M. Storb family at the corner of Custer and Conestoga streets in the borough. In April 1941, the first Catholic Church in New Holland was formally dedicated by Bishop George L. Leech of the Diocese of Harrisburg. That building is now home to First Baptist Church of New Holland.

Over the next 30 years, the congregation continued to grow. That growth coincided with the growth of the former New Holland Machine Co., which was acquired by Sperry Corp. in 1947 and today is a brand of CNH Industrial.

Our Lady of Lourdes joined with the Ephrata and Lititz parishes in 1954 to establish Our Mother of Perpetual Help School in 1954.

By 1970, the congregation had grown so large that, over the next two years, summer Masses were held in New Holland’s Ritz Theater.

That prompted church leaders to meet with Bishop Joseph T. Daley, of Harrisburg, to discuss the need to build a larger church.

In October 1971, the parish purchased 8 acres on Water Street from Eli Horning and on Sept. 24, 1972, members celebrated Mass at the new church.

In 1977, Daley decreed Our Lady of Lourdes a parish to serve the borough of New Holland and seven surrounding townships.

“The big thing is that it’s a parish in its own right, and not attached to another parish,” Fauser explained.

In 1999, the Rev. John Schmalhofer became the first diocesan priest to be assigned to Our Lady of Lourdes as pastor. Prior to Schmalhofer’s assignment, the Redemptorists had provided pastors.

“Sometimes, there are religious communities who make a commitment to work in a diocese and so they manage a few parishes,” Fauser said. “That was the case with the Redemptorists.”

Under Schmalhofer’s leadership, the church added a Parish Center in 2010.

The church has taken an active role in the community, hosting Thanksgiving dinners in the past as well as working with the New Holland Area Food Bank and with other ministries in Lancaster County

“We’re working on a new parish directory at the moment,” Smith-Kernc said, “so I’ve been taking photos of all the different ministries we have here and I have over 45 different groups that are represented.”

Among those groups are a Sanctity of Life committee; the St. Vincent DePaul Ministry, which helps people in need; and an Angel Tree program at Christmas “where we donate a lot of presents to different ministries around Lancaster County,” she added.

The church often sees new faces during the summer tourist season. Church member Bob Quinlivan said a number of people who have visited the area and attended services at the church ultimately retire in New Holland.

“We’ll see people from all over,” Fauser said. “We’re the furthest East (parish) in Lancaster County in Amish and Mennonite and Anabaptist country.”

The church also has been recognized by outside sources. In 2001, the church was one of nine Catholic churches in Pennsylvania that was cited as a “model of excellence” by religion author Paul Wilkes in his book, “Excellent Catholic Parishes: The Guide to Best Places and Practices.”

Our Lady of Lourdes, New Holland

- April 20, 1941: Dedication of Our Lady of Lourdes Catholic Church on West Conestoga Street in New Holland.

- 1970-1972: Due to growing Catholic population, summer High Mass is held at the Ritz Theater in New Holland.

- July 1999: The Rev. John Schmalhofer becomes the first priest to be assigned to the church by the Diocese of Harrisburg.

A new program at Elizabethtown College promises to continue the school’s Anabaptist legacy of peacebuilding.

When Mark and Martha Kelley moved to Lancaster County four years ago, they would walk the city’s streets to get a feel for the community.