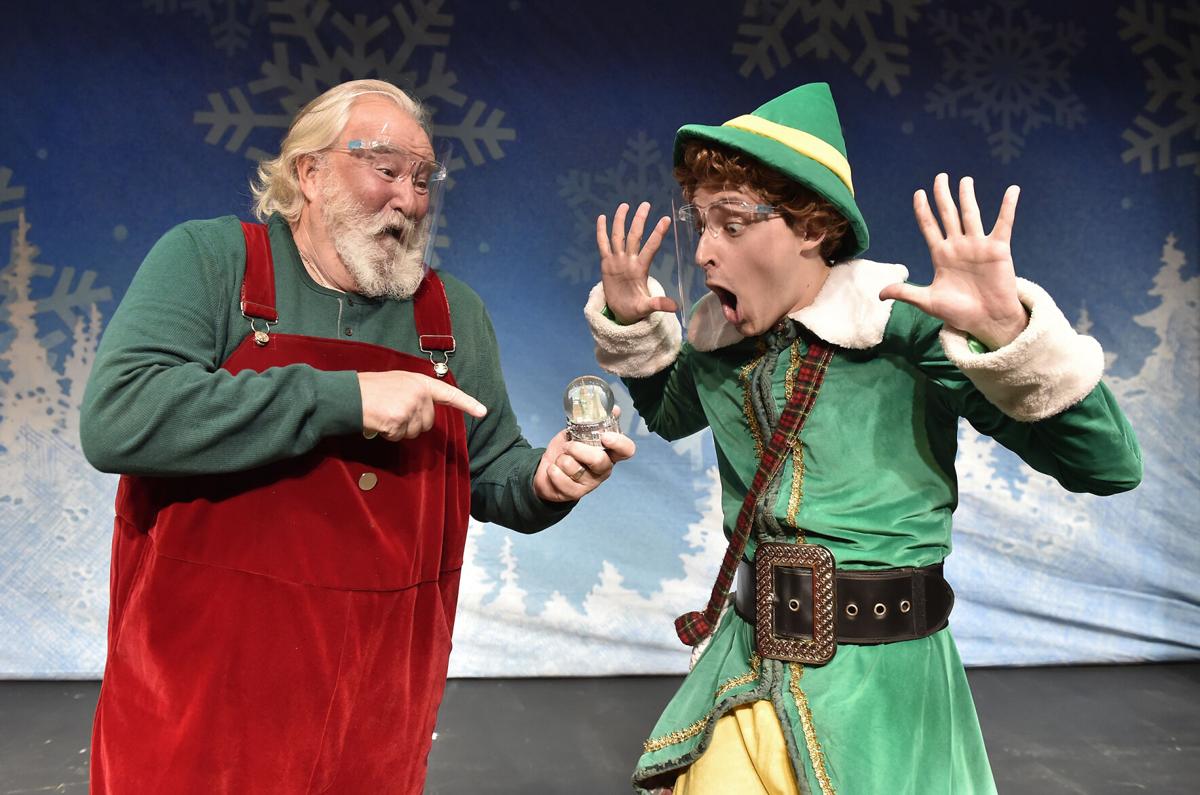 Santa Claus, played by Dale Given, surprises Buddy Hobbs, played by Kole Mitchell McKinley, with a snow globe during rehearsal of the Dutch Apple Dinner Theatre's production of "Elf the Musical," on Monday, Nov. 9, 2020. 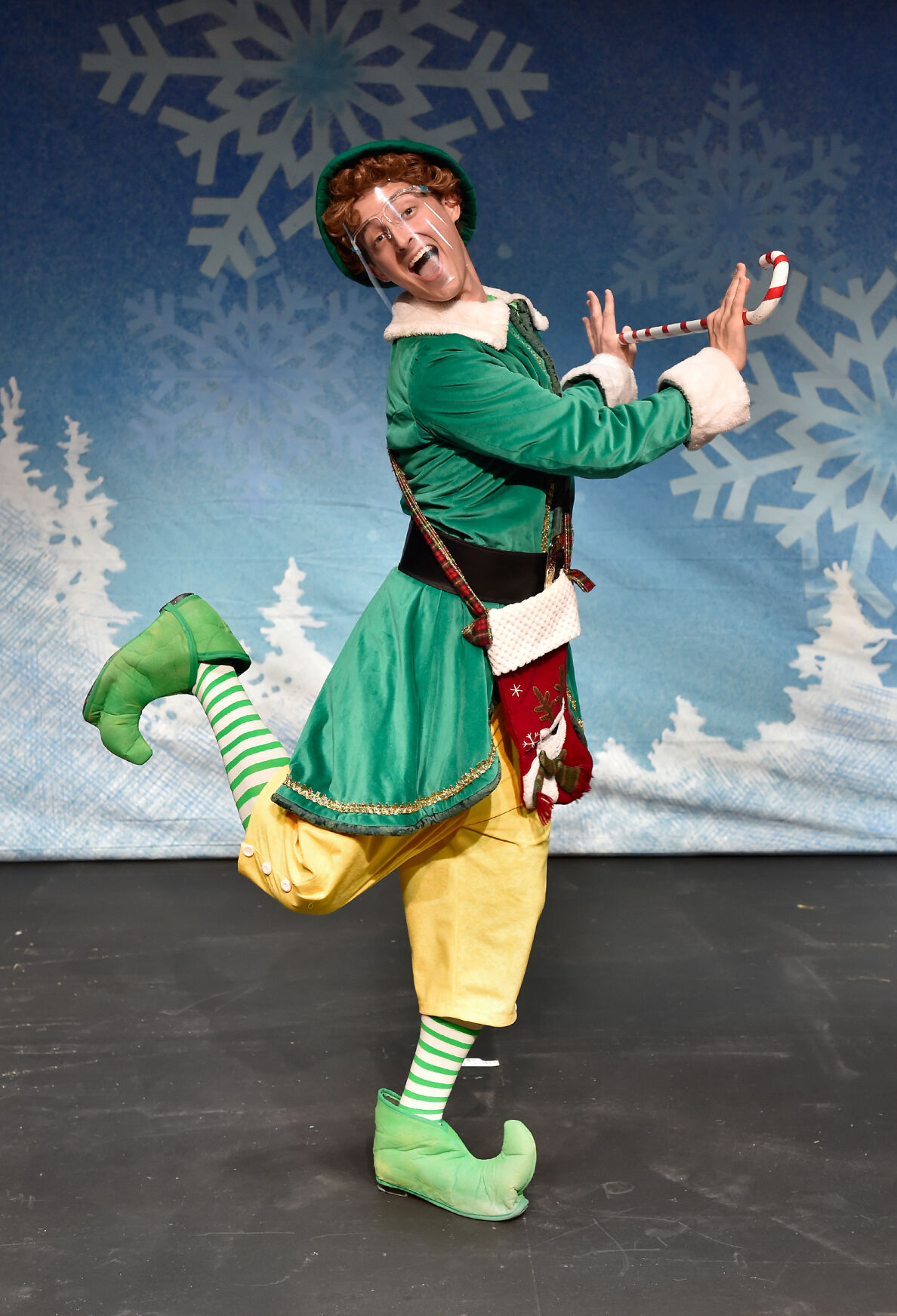 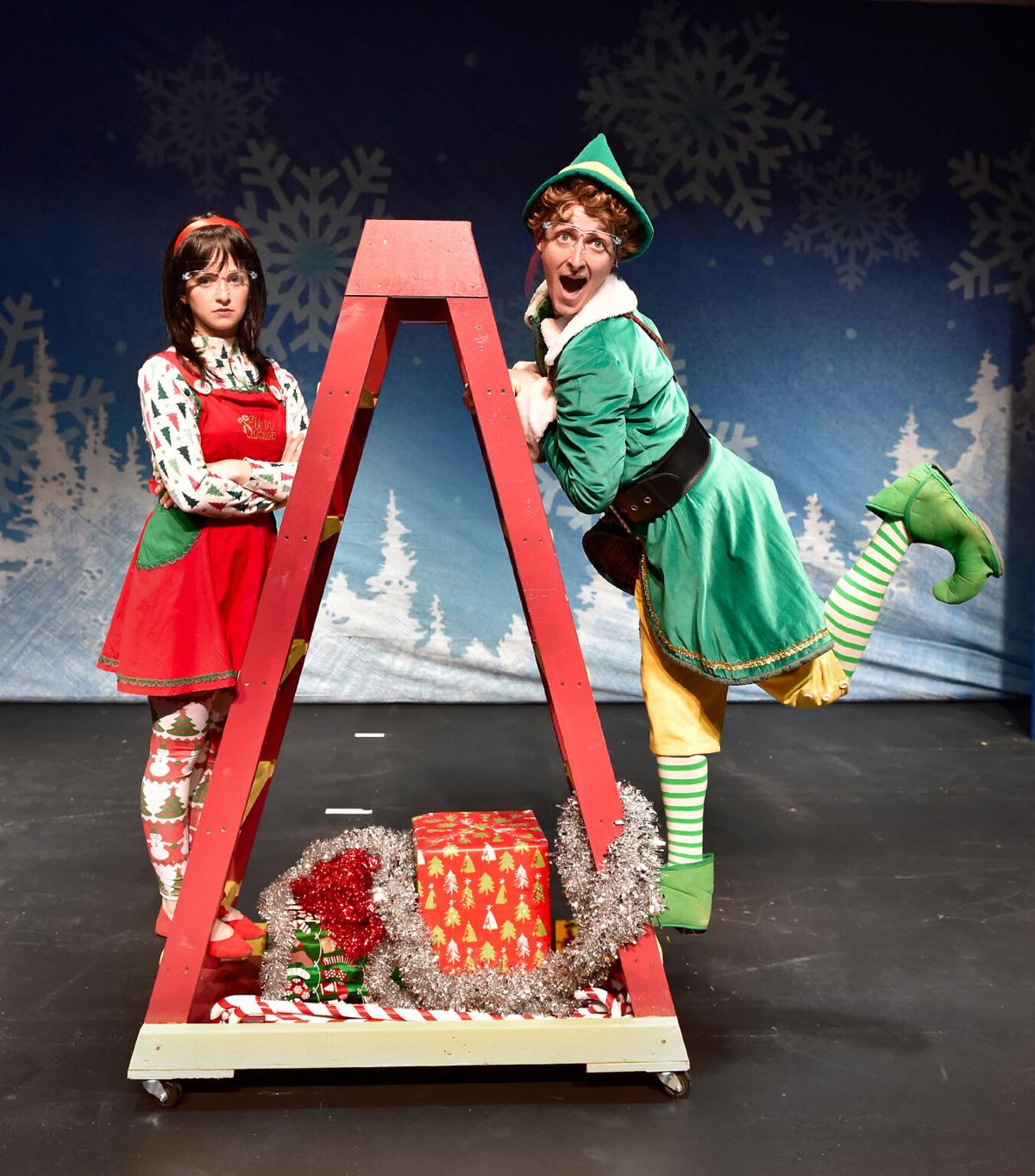 From left, Jovie, played by Emily Woods, is the romantic interest of Buddy Hobbs, played by Kole Mitchell McKinley, in "Elf the Musical" at the Dutch Apple Dinner Theatre. They're shown in rehearsal on Monday, Nov. 9, 2020. 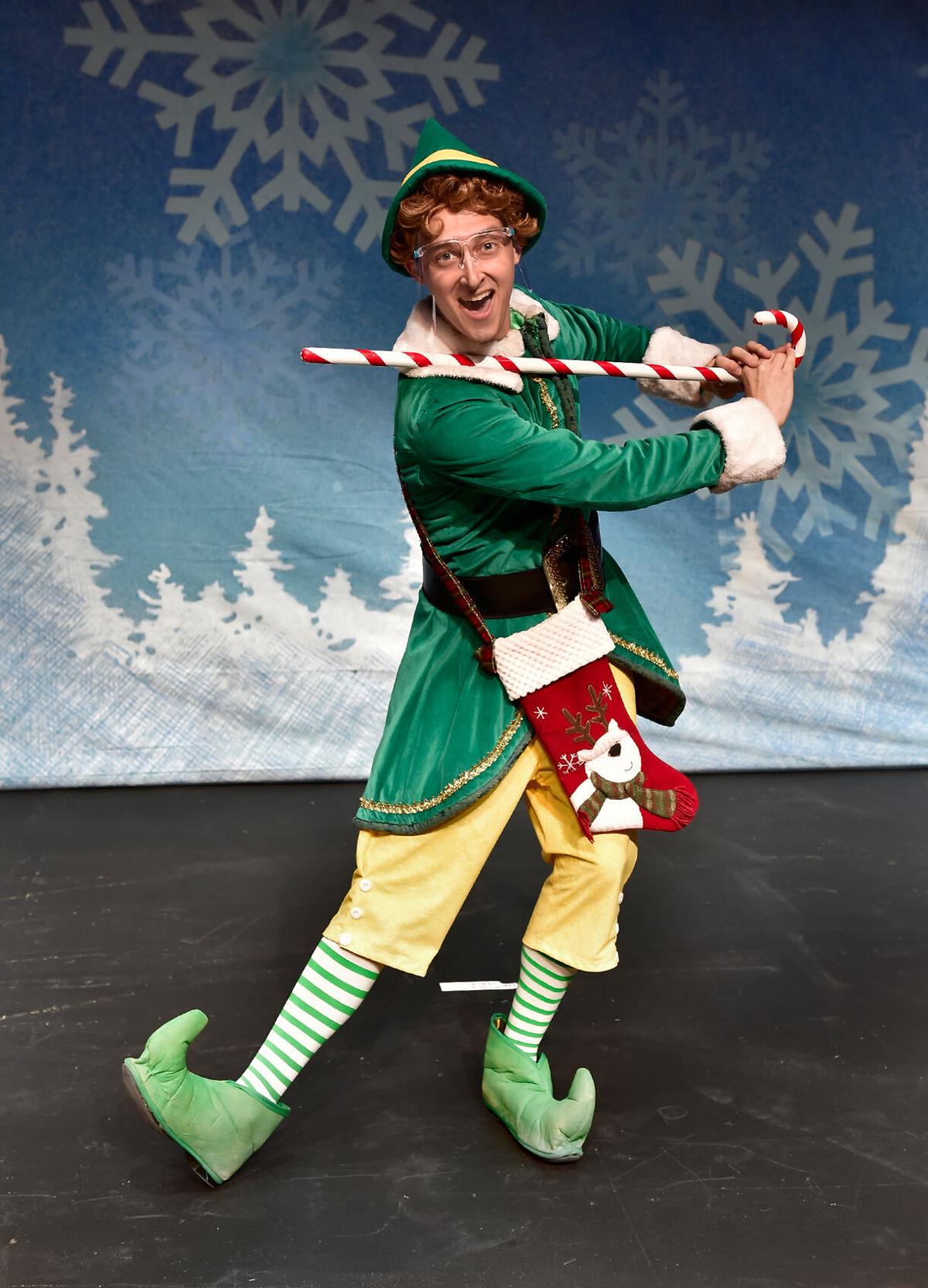 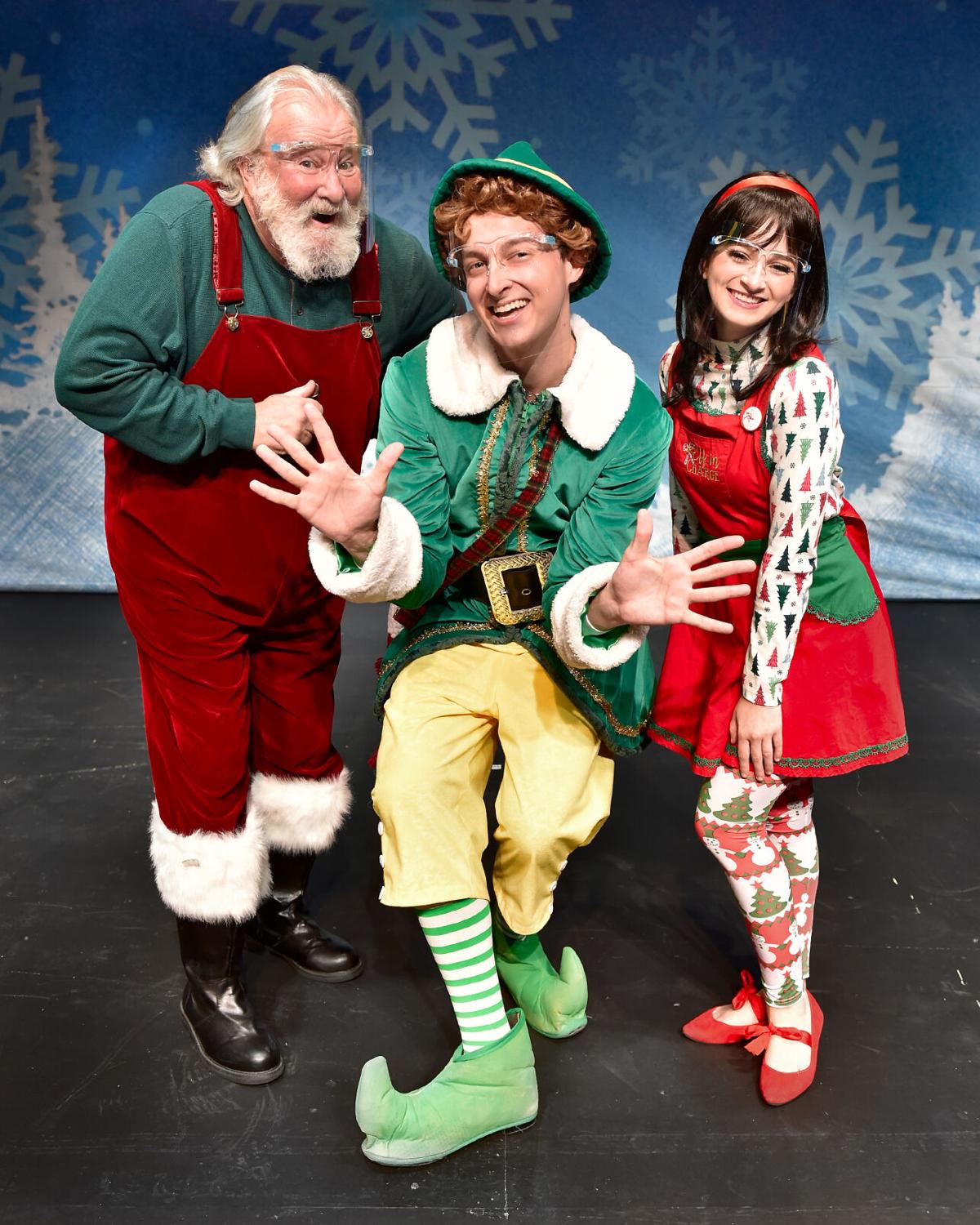 Santa Claus, played by Dale Given, surprises Buddy Hobbs, played by Kole Mitchell McKinley, with a snow globe during rehearsal of the Dutch Apple Dinner Theatre's production of "Elf the Musical," on Monday, Nov. 9, 2020.

If the events of 2020 have left you with a yearning for an especially large helping of Christmas spirit this year, Buddy Hobbs is ready to deliver a high-energy dose of it.

He has been raised to believe he’s one of Santa’s elves, after all.

The actor who is portraying Buddy in “Elf the Musical” at the Dutch Apple Dinner Theatre is ready to serve up the spirit, as well. The show opens tonight, Thursday, Nov. 12.

In the musical, based on the 2003 Will Ferrell comedy film of the same name, Buddy’s toymaking elf life is shaken when he learns he’s actually human. As an orphaned child, he had crawled into Santa’s bag at Christmastime, and was raised at the North Pole by Santa and other elves.

The naive, energetic and perpetually happy Buddy learns he has a human dad, whom he travels to the confusing city of New York to find. Musical adventures in learning about his fellow humans, and finding both familial and romantic love, ensue.

Though this is his Dutch Apple debut, McKinley previously played Buddy in a 2018 “Elf” production in New Jersey.

The role reminds him of a part he played in Utah last year — Josh Baskin, the boy who magically winds up in a man’s body, in “Big the Musical.”

It sounds like Christmas as stations switch to holiday music; when do you start listening?

“It’s a very similar archetype of these characters,” he says. “I think I find a lot of success in finding that energy and that childlike essence, just from living in those moments — as if this were the first time I saw a skyscraper or a taxicab.

“Buddy, for me, thankfully, is a lot like I see myself, at least — that kid at heart,” says McKinley, a Florida-based actor who has performed in regional theater around the country.

McKinley credits the composers of the music for “Elf,” the songwriting team of Matthew Sklar and Chad Beguelin, for shaping the musical as an its own entity, apart from the familiar Ferrell film.

“They are two of my favorite musical theater composers,” he says, noting they wrote the scores for the stage musical adaptation of the Adam Sandler film “The Wedding Singer” and the recent Broadway show “The Prom.” The latter will be released as a musical film on Netflix next month, by director Ryan Murphy.

“I think a lot of the success (of ‘Elf’) comes from them,” McKinley says of the songwriters. “At the core, as silly as the movie or Will Ferrell may be, it’s a great story about a guy that hasn’t quite learned that he’s still a child in a lot of ways.

“I think the message is that it's never to late to learn that, and never too late to grow,” McKinley adds.

When theater productions around the country shut down because of the COVID-19 pandemic in the spring, the Charlotte, North Carolina, native quarantined with his parents in Florida and worked in bartending and food service.

In the late summer, hoping theaters might open back up in the winter, he says, he had the foresight to start working out with a trainer again, in earnest.

McKinley says he lost 25 pounds and got into better shape than he was in before the pandemic — which will come in handy playing the high-energy Buddy.

In this era of the coronavirus, McKinley notes, the character won’t be able to be as physically affectionate as he usually is on stage, to ensure proper social distancing among the actors in the Dutch Apple cast.

In addition, the actors wear clear face shields when they’re on stage as part of the theater’s many safety measures.

“One of the biggest challenges of playing Buddy is stillness,” McKinley says, “and letting some of the text speak for itself, and living in those moments, not overacting,”

Because of Buddy’s childlike energy, “I think it's one of the most challenging roles for an actor,” McKinley says.

“It’s something I love. I would rather not be doing any other show than this show during the wintertime, because I think it has such a great message. It’s happy. It’s upbeat,” he says.

• Details: Recommended for ages 8 and older.

• Safety information: Audience members must wear masks in the theater except when dining at their tables; temperatures will be checked before entry. Tables are physically distanced, with reduced seating capacity; buffet is served by staff.

The Mayor's Tree Lighting ceremony won't happen this year, but the city will still celebrate

In an effort to limit crowd sizes during the COVID-19 pandemic, the Lancaster Office of Promotion is tweaking its traditional holiday ceremony…