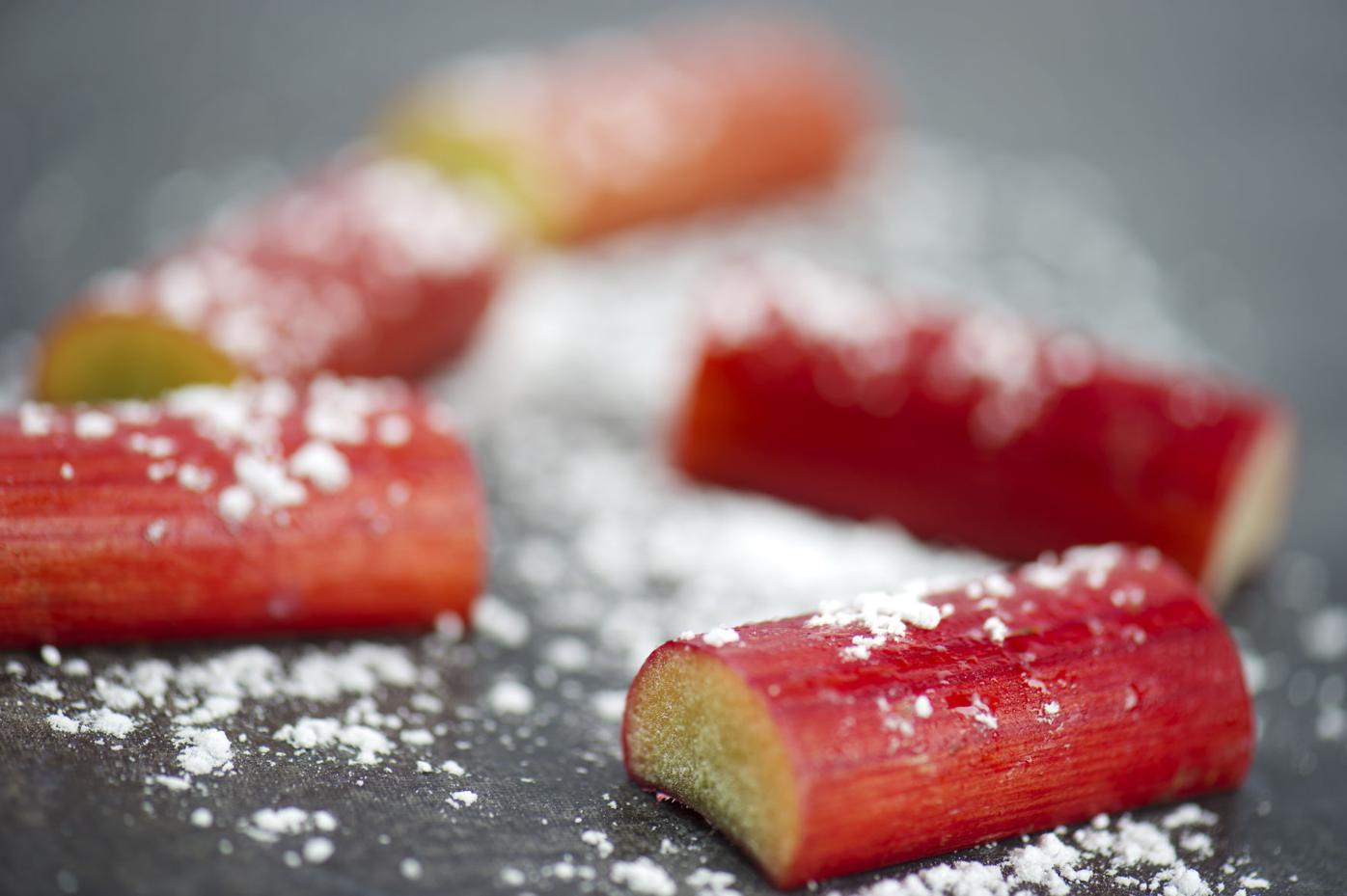 Sugar, maple syrup and honey are often used on cut-up rhubarb to balance out the tangy flavor. 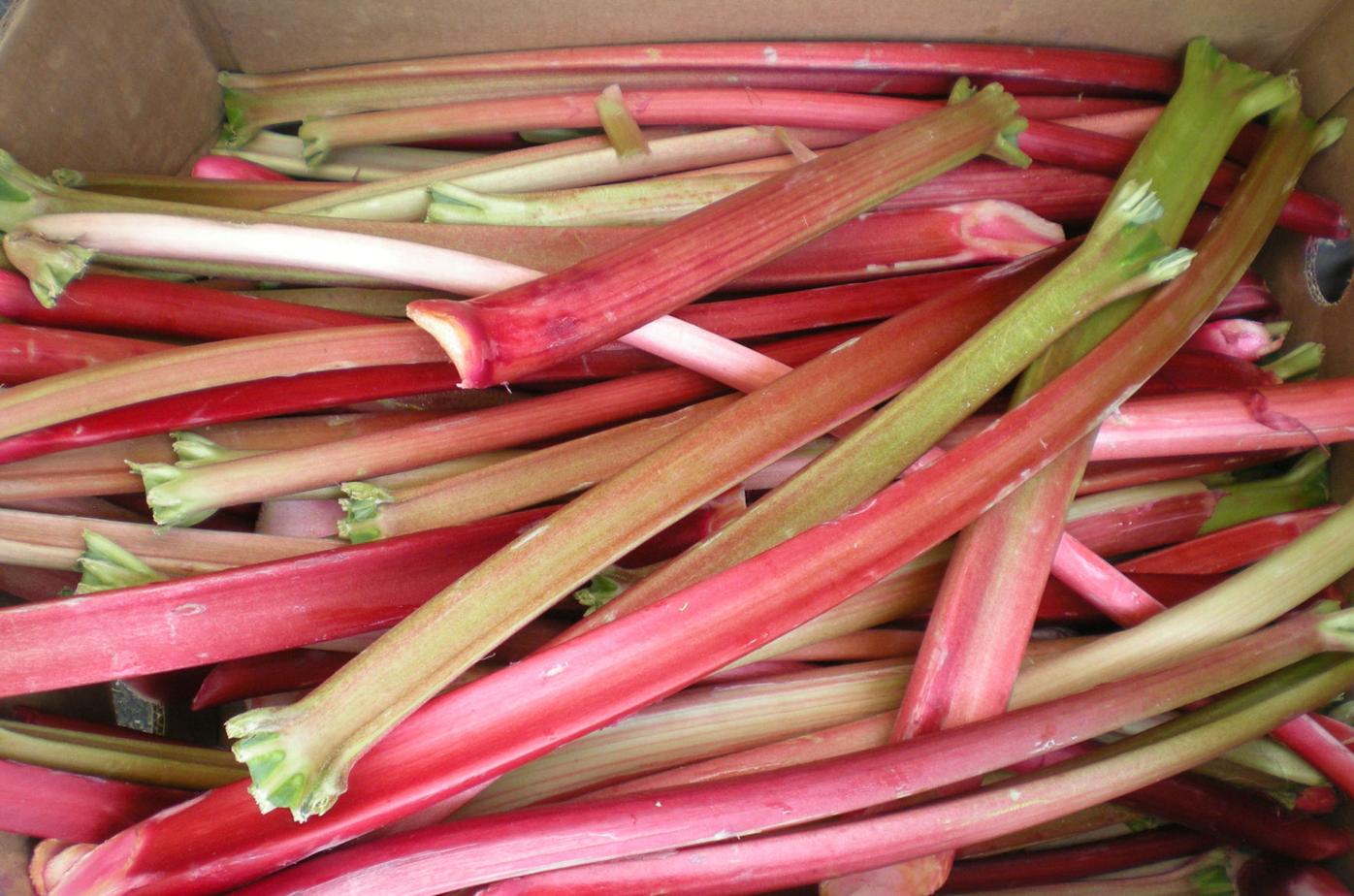 Rhubarb was in abundance at last year's annual Rhubarb Festival at Kitchen Kettle Village. This year's festival is Friday and Saturday. 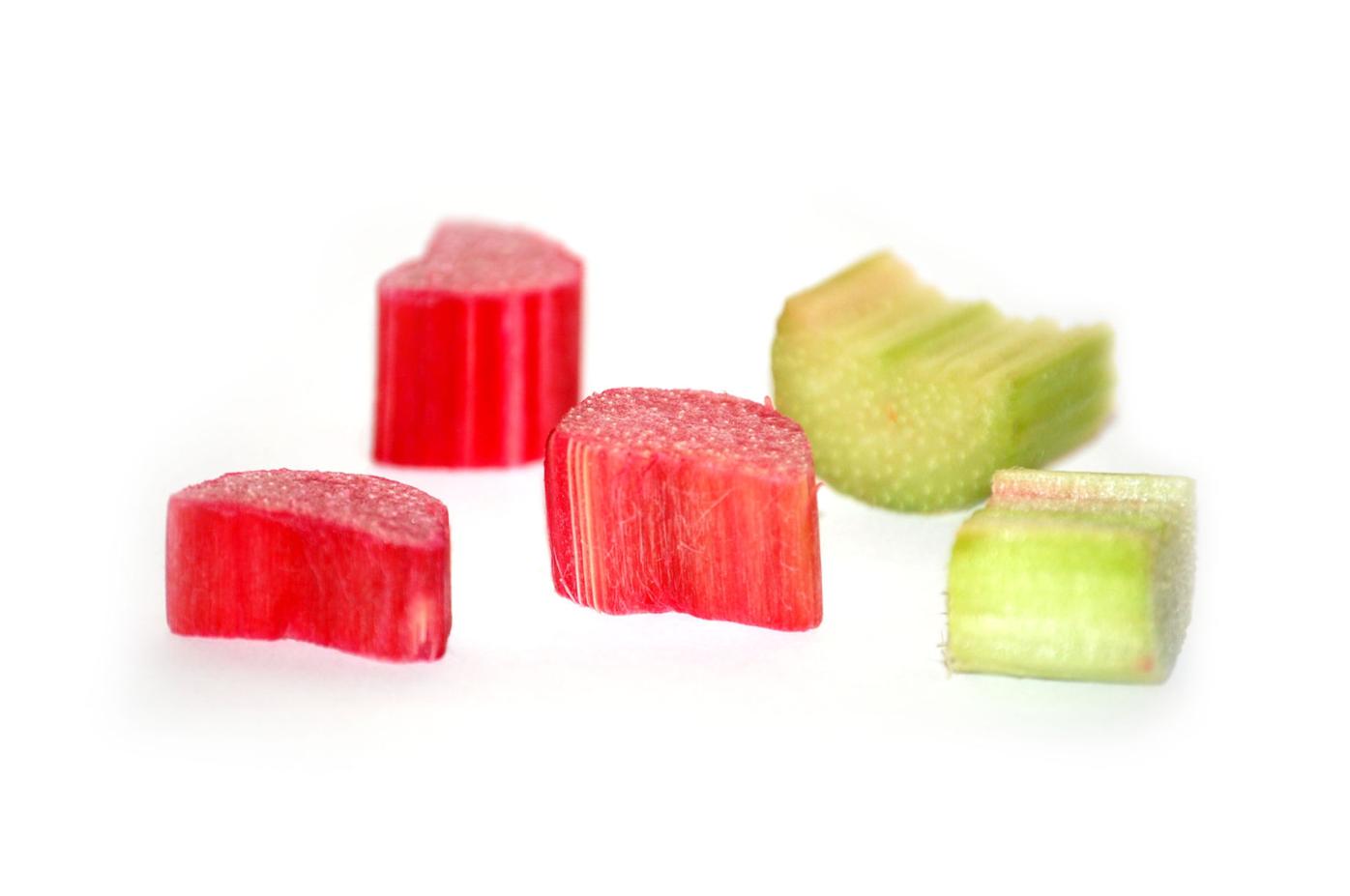 Much of the rhubarb sold in Lancaster County is pink; however, there are several other varieties of the vegetable, including green ones. 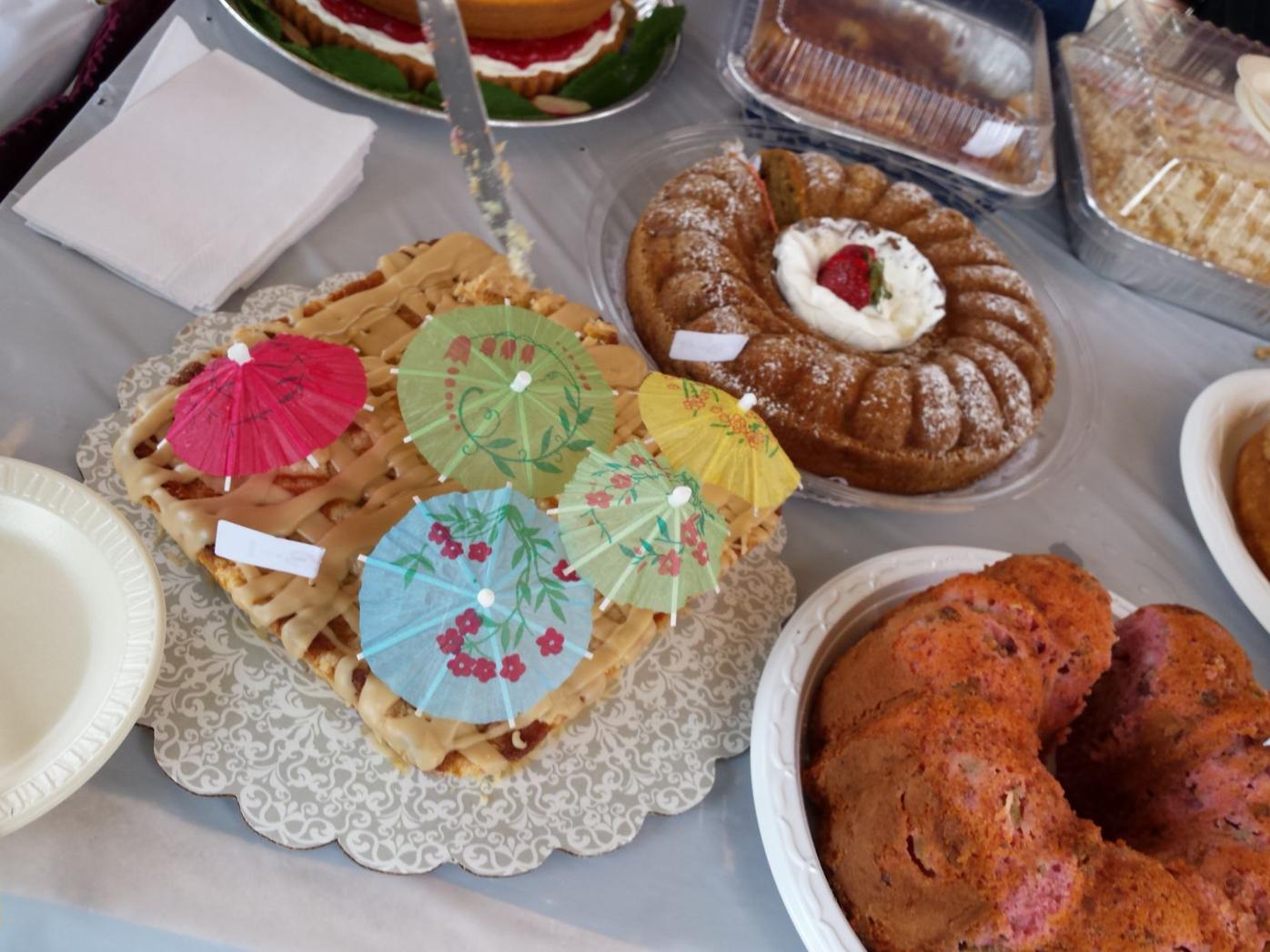 A variety of rhubarb-based desserts vie for prizes in the annual Kitchen Kettle Village Rhubarb Festival dessert contest. These are some of the dishes entered in 2015.

Sugar, maple syrup and honey are often used on cut-up rhubarb to balance out the tangy flavor.

Rhubarb was in abundance at last year's annual Rhubarb Festival at Kitchen Kettle Village. This year's festival is Friday and Saturday.

Much of the rhubarb sold in Lancaster County is pink; however, there are several other varieties of the vegetable, including green ones.

A variety of rhubarb-based desserts vie for prizes in the annual Kitchen Kettle Village Rhubarb Festival dessert contest. These are some of the dishes entered in 2015.

Spring in Lancaster County brings with it a harvest of bright pink, tart stalks that somehow finds themselves transformed into the sweetest desserts, condiments and beverages.

It’s rhubarb season, a time for celebrating this vegetable that thinks it’s a fruit. We celebrate with the annual Rhubarb Festival at Kitchen Kettle Village (see related story), and by making plenty of pies, cakes, crisps, jams, sauces and punch.

Rhubarb is also very good for us, says Stacy Reed, a new educator with Penn State Extension in Lancaster, focusing on food safety and nutrition.

“It does have some great health benefits,” Reed says, including for your immune system and digestion. A National Institutes of Health study noted some possible cancer-fighting properties in the vegetable, as well, she says.

“In its raw form, it’s pretty low in calories — 26 for 1 cup,” Reed says, “ and it’s very low in saturated fat (and cholesterol). It’s good for someone who may have heart issues, or may want to lower their cholesterol.”

It’s high in potassium, dietary fiber and vitamin C, Reed notes, and is a good source of calcium and vitamins A and K. It contains iron and other minerals, as well.

Because it’s “very tart and sour, “she says, many people use sugar, maple syrup or honey to sweeten rhubarb.

In addition to cakes, pies, jams and sauces, Reed notes, rhubarb can be drizzled with honey or maple syrup and used in a salad or yogurt, or even as a pizza topping.

“It’s not very popular with the younger generations, but it could be something they might want to get more of into their diet,” Reed adds.

“It’s a pretty hardy plant,” Reed says, that will come back in your garden year after year, producing for 10 to 15 years. You should probably wait to harvest it, however, until the second year.

And be sure never to eat rhubarb leaves, Reed says; they’re poisonous because of the oxalic acid.

We recently asked LNP readers how they use rhubarb, and many contributed tips and recipes for desserts, sauces, beverages and more.

“I made a few changes to the original recipe,” Gathercole says. “Our family thinks it is an excellent dessert.”

RHUBARB CRISP WITH HONEY AND GINGER

Bake in preheated 375 degree oven for 40 to 45 minutes or until rhubarb is tender.

When rhubarb arrives in abundance, Dorothy Lower of Elizabethtown plans ahead for making her favorite rhubarb recipes.

“Wash and cut the rhubarb into bite-size pieces, put them in vacuum freezer bags and freeze them raw,” Lower says. “When ready to use, take out the amount you want and cook you favorite recipe. Stew it with a little water and either sugar or stevia to taste.

“It’s great just like that, or over ice cream as a dessert,” she adds. 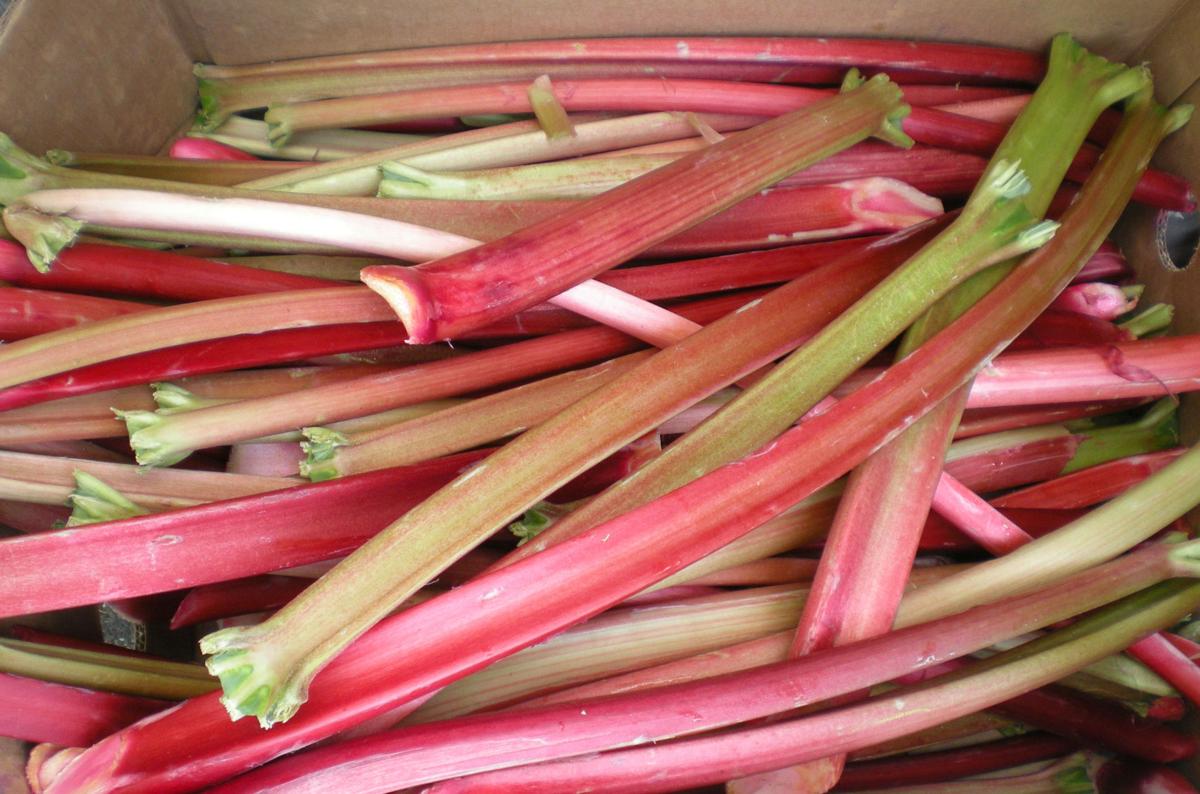 Ethel Stoner of Stoner’s Homegrown Vegetables at Lancaster Central Market offers this beverage recipe, which she says is a “yummy punch.”

“No one will know it has rhubarb in it unless you tell,” Stoner adds.

• Juice of 6 lemons (may substitute strawberries)

Cover rhubarb pieces with water and cook about 10 minutes until soft. Drain, reserving juice — about 3 cups.

To sugar syrup, add the juice of the lemons and pineapple juice, (or, if you prefer, add 1 cup fresh strawberries instead of lemons, and mash into syrup). 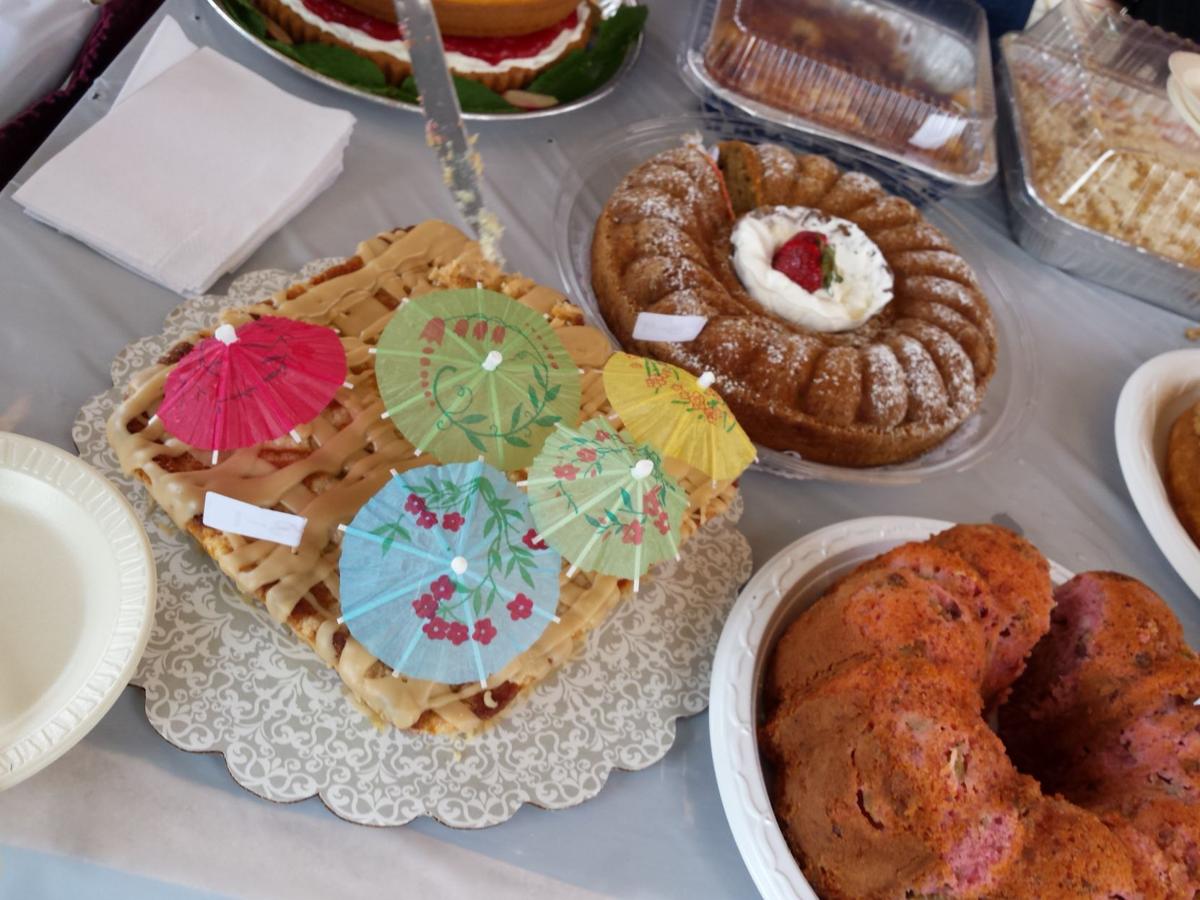 Mix together crumb ingredients; set aside.

Preheat oven to 350 degrees. Boil water, sugar and cornstarch until clear. Stir in rhubarb. Pour into pie shells and top with crumb mixture.

“I never liked rhubarb growing up,” Ilene J. Sangrey of Paradise notes. “My mother would always make pies with it, and every year for the last 40 years she would make my husband one.

“He loved her rhubarb pies, and I could never make one like hers,” Sangrey adds.

Her mother has since passed away, and she still makes her husband rhubarb pie (though, she confesses, still not as good as her mom’s).

Sangrey offers this recipe for baked bars, which she says are a little on the sweet side. 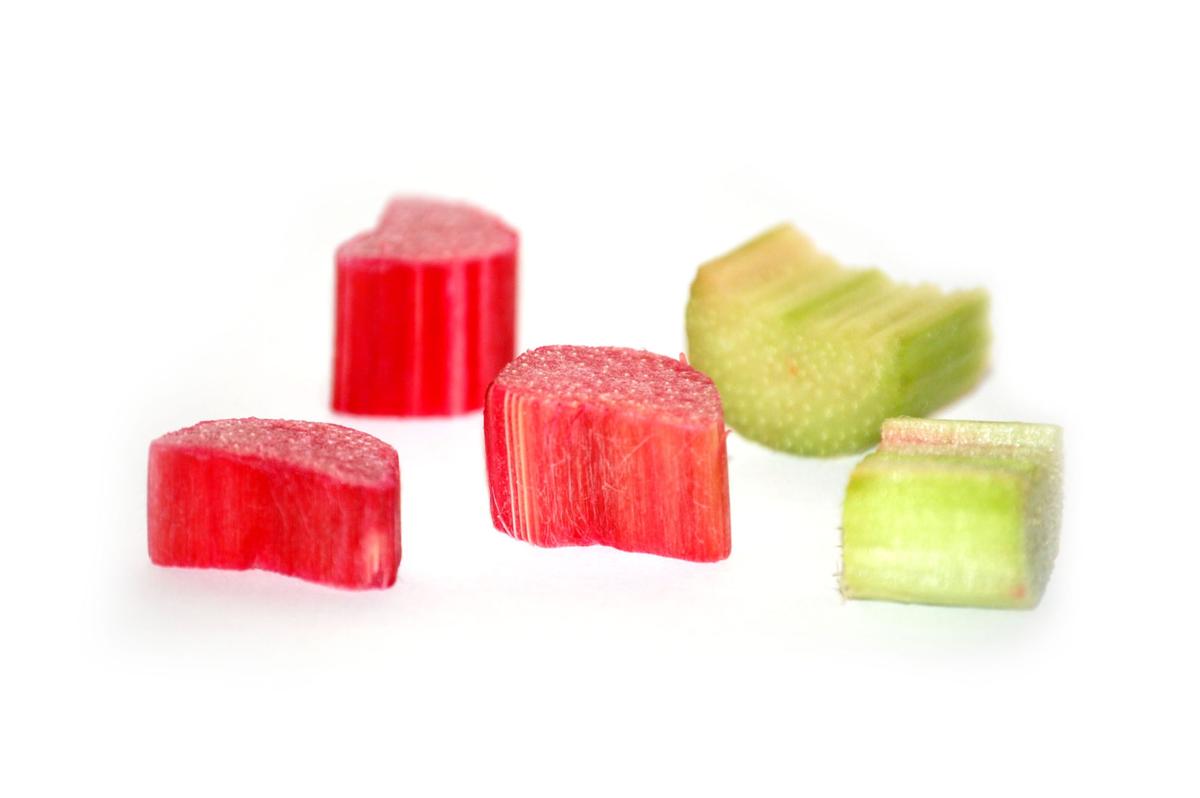 “I have one rhubarb plant in my garden,” says Lynn M. Kreider of Lancaster, “and love to watch it growing every spring.”

Directions: Mix pineapple, orange, lemon and rhubarb in a food processor. Mix together the fruit and sugar and refrigerate 5 hours.

Boil the mixture for 25 minutes or until thickened.

Can the jam in jars, freeze and give to friends for Christmas gifts.

This recipe for baked rhubarb with a meringue topping comes from Janet Harry of Columbia.

• 3 cups rhubarb, with leaves and root end trimmed off and cut into ½-inch pieces

Put rhubarb in saucepan with flour and 1 cup of the sugar. Blend, add water and simmer 10 minutes while stirring. Add berries.

Remove from heat and stir in well-beaten egg yolks. Turn mixture into 8-inch square casserole dish and bake at 350 degrees for 10 minutes.

Beat egg whites until stiff, fold in remaining ¼ cup of sugar, spread over baked rhubarb mixture and return to oven at 300 degrees. Bake 15 minutes or until the meringue topping is lightly browned.

Beat together butter and sugar until light and creamy.

Stir in orange juice and egg and mix well. Add dry ingredients and mix only until evenly moistened. Fold in rhubarb.

Pour into a 9-by-9-inch cake pan. Combine sugar and cinnamon, and sprinkle over batter.

Helen Becker of Lititz says her mother always added a touch of vanilla to her rhubarb sauce, “and for 62 years, I have done the same.”

Rhubarb with vanilla doesn’t need as much sugar, Becker says.

Finally, Romaine Wetzel of Ronks makes her rhubarb sauce — adapted from “A Taste of Home,” one of the 250 cookbooks she owns — a couple of different ways.

For a pound of rhubarb, cut into 1-inch pieces, add a small amount of water — ½ to 1 cup — and ½ cup sugar. Simmer, covered, for 25 to 30 minutes, until tender. Add a dash of cinnamon, if desired, or a little more sugar, to taste.

“I always freeze rhubarb and strawberries,” Wetzel says. When making strawberry-rhubarb sauce, she simmers together the pound of rhubarb and 1 quart of frozen strawberries, with no water and using Splenda instead of the sugar.

“I simmer until all the fruit is mixed together and looks stringy.”

For more information about rhubarb, visit these agricultural websites:

• An informational Web page about the vegetable, compiled by Virginia Cooperative Extension.

• For nutrition information about rhubarb, visit Penn State Extension's page on the subject.

Preheat oven to 400 degrees, with rack in middle of oven.

Place blueberries and rhubarb in medium bowl, and toss to combine. Stir together sugar and cornstarch in a small bowl. Sprinkle that mixture over fruit, tossing gently to coat. Set aside; the fruit will begin to turn to juice.

Give the fruit a quick stir, then pour into crust.

Prepare top crust and place it on top, leaving a ¾-inch overhang of dough. Tuck overhanging dough under the edge of bottom crust, and crimp the two crusts together. Cut a few small slits in the top crust with a sharp knife.

Place baking sheet with pie in 400-degree oven. Bake until filling is thick and bubbling and crust is brown – 45 to 55 minutes. Cover crimped edge with foil if it browns too quickly.

• 1 ½ cup flour (you can also use ½ cup whole wheat flour, ½ cup white flour and ½ cup oatmeal blended in blender until it looks like flour)

Combine dry ingredients. Cut in shortening. Add water, mix gently and roll out into rounds on pastry mat, half of the mixture at a time.

Mix rhubarb with sugar, flour, salt, cinnamon, lemon rind and butter. Pour into 9-inch pan with prepared pie crust. Mix the eggs with milk and pour over rhubarb. Bake at 300 degrees until custard is set, 1 hour or more, depending on your oven.

— Submitted by Romaine Wetzel of Ronks, adapted from “Taste of Homes.”

Out of the submissions of rhubarb recipes and tips from our readers, Helen Becker of Lititz was randomly selected to receive the book “One-Pot Gourmet Gardener,” by Cinead McTernan. Our randomly selected runner-up, Catherine Mills of Willow Street, will receive the cookbook “Cookie Classics Made Easy,” by Brandi Scalise.