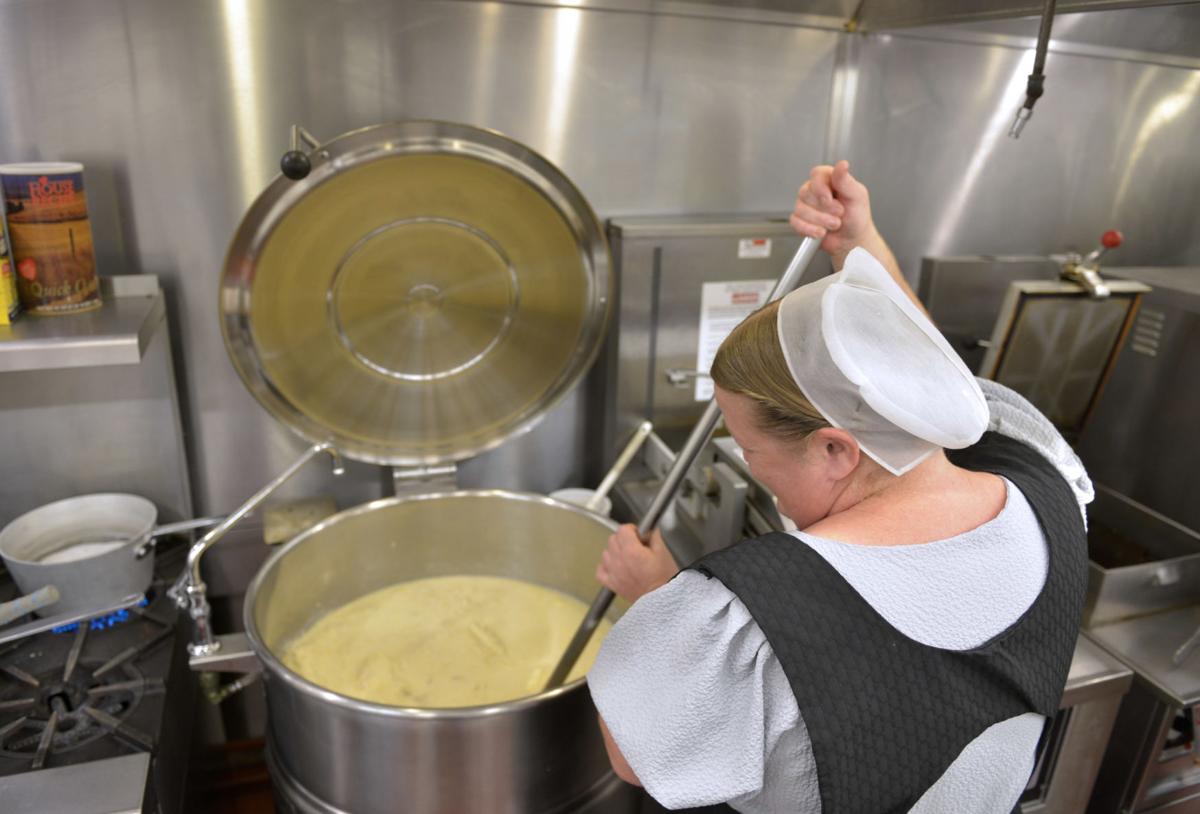 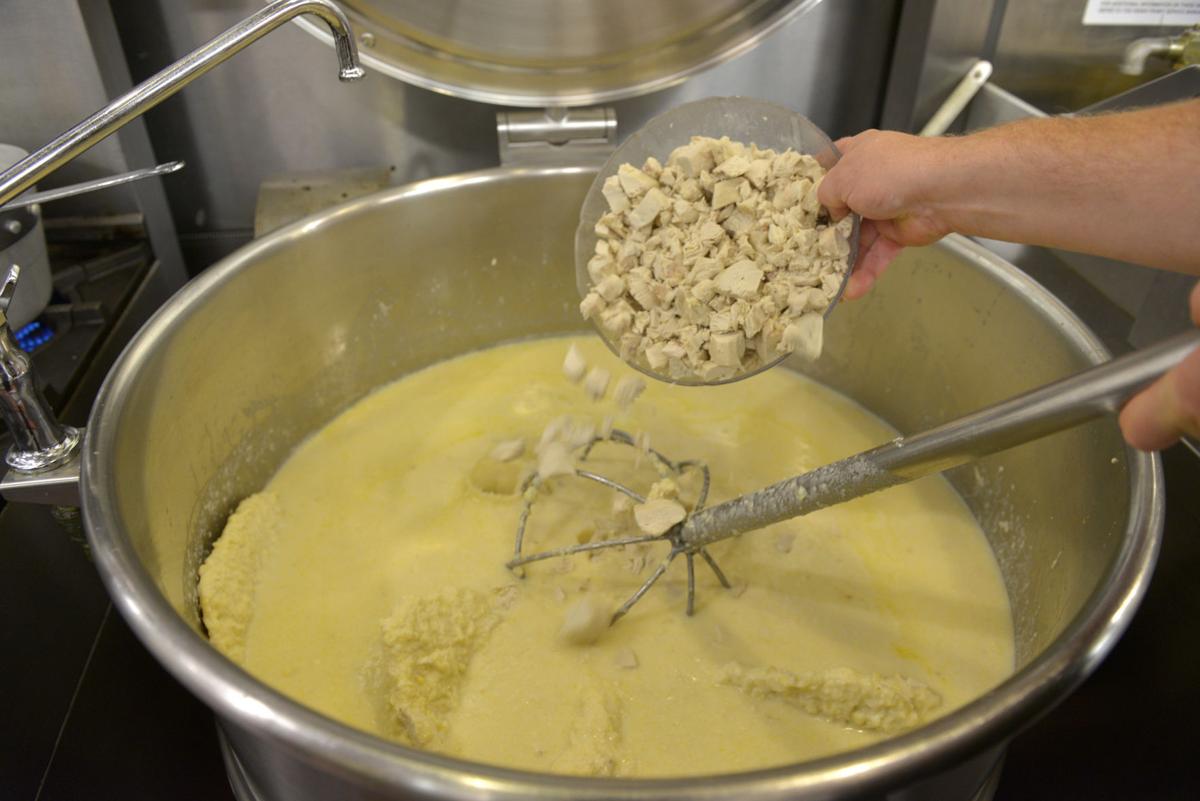 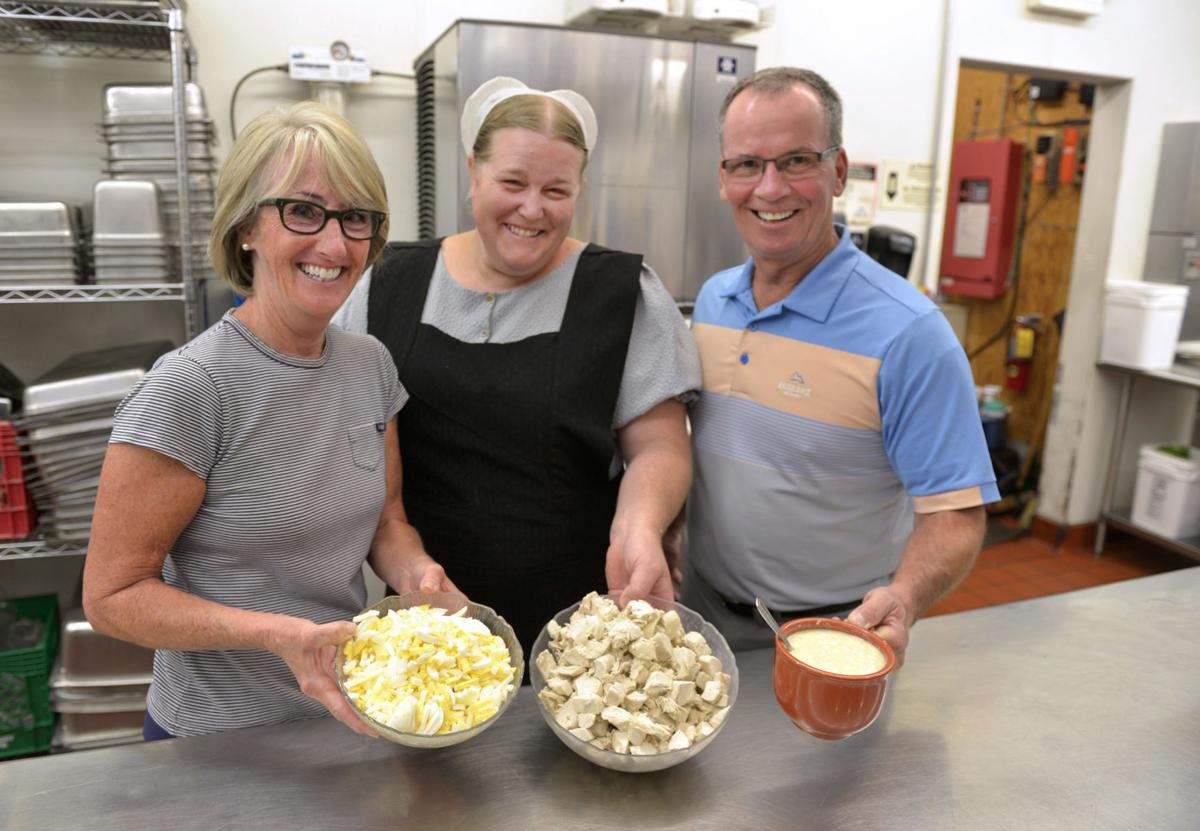 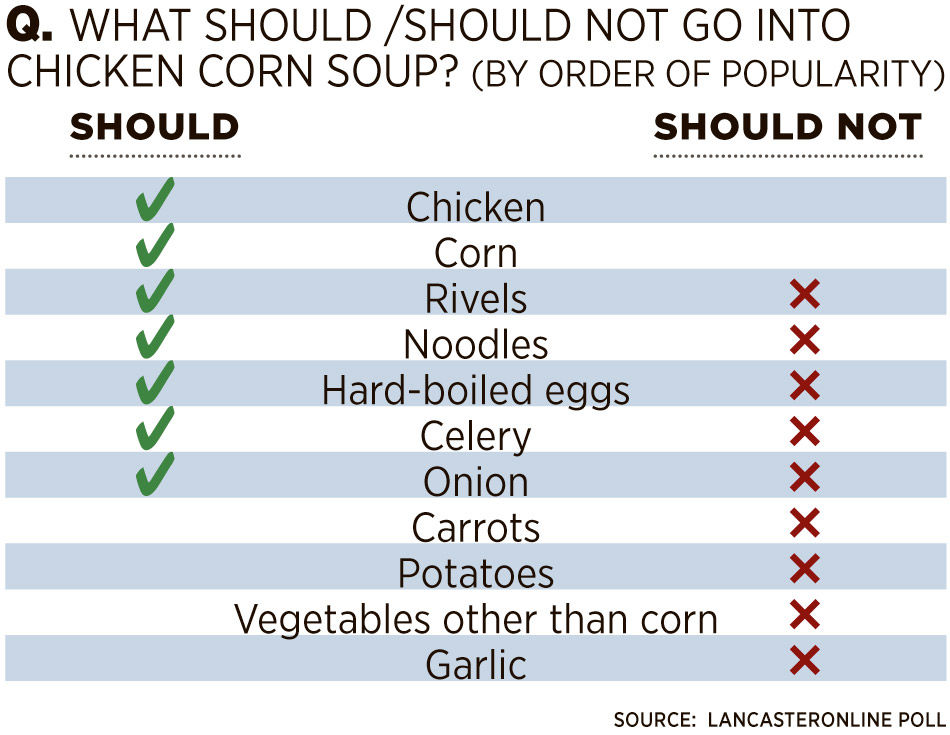 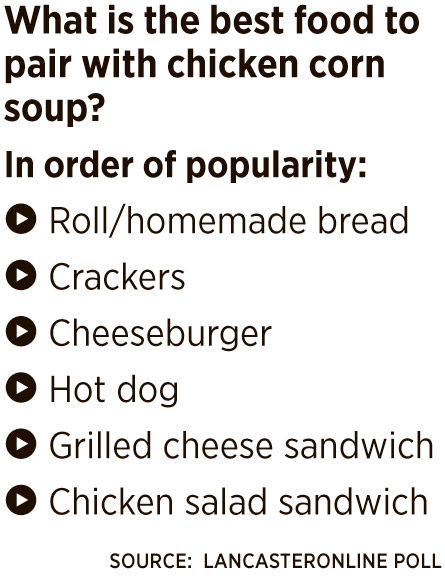 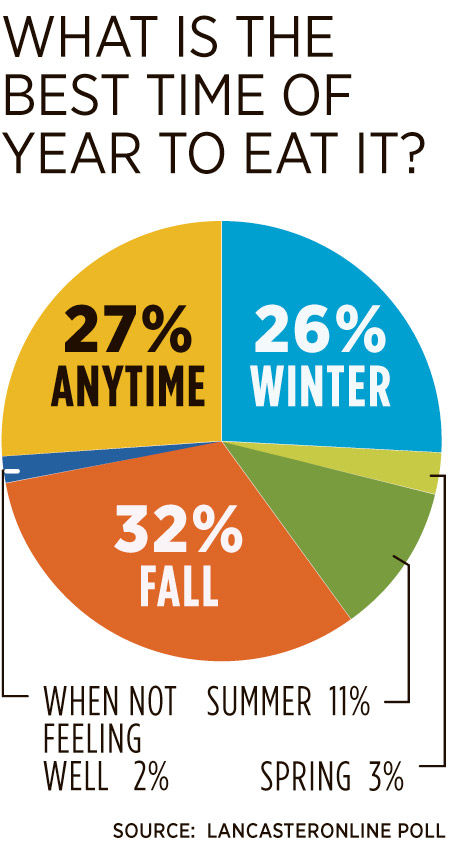 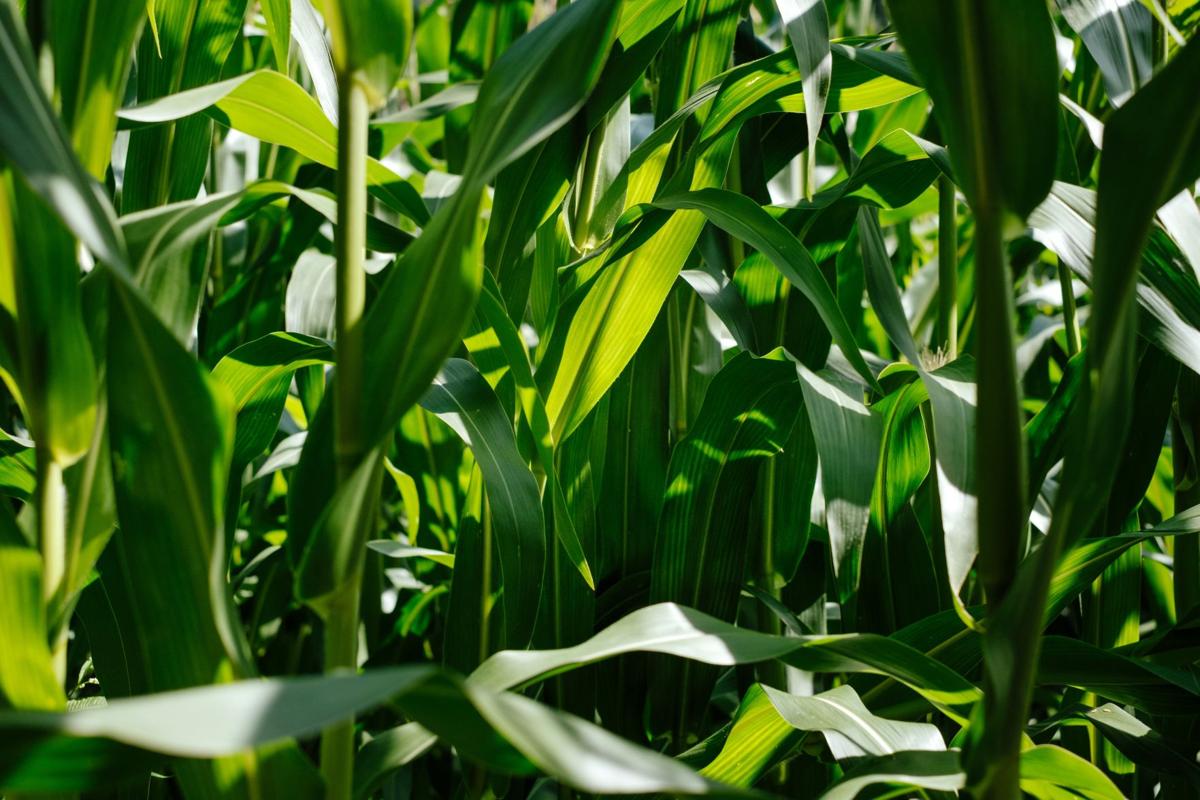 It’s comfort food packed with sweet corn and savory chicken. Maybe you thicken it with rivels — small homemade dough balls. Maybe you add a pinch of saffron. Maybe you add egg noodles or hard-boiled eggs. No matter how you make it, chicken corn soup is a hearty Pennsylvania Dutch dish. And if you don't make your own, you can surely find it at a local fair this summer, a football game in the fall, in the freezer during the winter or at a mud sale in the spring.

"It tastes like my childhood," she says. "It's something my grandmother would make all of the time. She made it from scratch."

Forrester, who lives in southern Lancaster County, has her grandmother's recipe for chicken corn soup, but has yet to make her first batch. The recipe starts with the cooking of a whole chicken and takes an afternoon to finish.

Instead, Forrester gets her soup fix Saturday mornings with a bowl at C.R. Lapp’s Family Restaurant in Quarryville. It hits the spot even at breakfast time.

Why it’s a Pennsylvania Dutch treat

Mixing chicken and corn in a soup makes sense in Pennsylvania Dutch country, especially Lancaster County. Lancaster has more chickens than any other county in the state; nearly 10 million were counted in the most recent U.S. Department of Agriculture census. We also have the most acreage devoted to corn in the state. Much of that is for silage and grain, but there’s still an abundance of sweet corn grown here.

Those two statistics, mixed with the fact that soups are economical and filling, give you a Pennsylvania Dutch staple.

John Moeller brought chicken corn soup to the White House when he was its top chef.

It’s also a popular fundraiser that’s helped pay for fire trucks and Sunday school supplies. Often, farmers donate a portion of their corn harvest, and many volunteers husk and prep piles of corn, and then use it to cook soup in giant kettles.

Chicken corn soup has been a staple at St. Paul Evangelical Lutheran Church's end-of-summer picnic in Penryn since the 19th century. This year's picnic is Aug. 18.

Penryn Picnic Grove also hosts Jerusalem Church’s picnic, held Aug. 4 this year. The church has been serving soup since the 1800s and the ingredients have remained the same for decades — chicken, corn, hard-boiled eggs and rivels.

Just as these picnics are reunions for the community, some families get together in late summer to make vats of chicken corn soup. There's plenty to eat and enough left over to freeze for a cold winter day.

How do you make the best chicken corn soup?

That depends on whom you ask.

Many people agree that using a whole chicken makes a richer broth. Fresh corn is also preferred but some use frozen, Cope's dried corn or, in a pinch, canned corn.

"It's a kernel cut in half," says restaurant owner Christy Lapp.

"It makes it more creamy," says his wife, Robin Lapp, also an owner of the restaurant.

LancasterOnline readers shared their favorite places to buy chicken corn soup and Lapp’s topped the list. The Lapps added chicken corn soup to their menu of comfort food when they opened in 2005. They use a recipe from Christy Lapp's mother, Rachel, to make a dish that’s expected at a family restaurant. They also sell it to local groups for fair stands and concessions at high school sports.

The Lapp recipe doesn’t include noodles or rivels. LancasterOnline readers are split over this. Just 43 percent of chicken corn soup fans add noodles. When it comes to rivels, readers are almost evenly divided, with 49 percent adding the small dough balls to their soup.

The Lapps are in the no-rivel camp.

"It compromises the integrity of the chicken corn soup," says Robin Lapp.

"Mom Lapp would roll over in her grave if she knew we were putting rivels in," says Christy Lapp.

Rivels are a must for the soup David Stoltzfus makes for Penryn Fire Company’s mud sale. The fire company dates back to 1912, and since then volunteers have raised money through breakfasts, barbecues and selling chicken corn soup.

Not too long ago, the fire company added its own mud sale fundraiser in March, and many people asked for the old-time chicken corn soup. Stoltzfus had bought the company's cooking kettles, so he was asked to make the soup. After a couple of years learning from the Shelly family, he's now the fire company's soup chef.

What makes it special?

"I can't explain it other than it is a rivel soup," he says.

The fire company's recipe calls for cooking the chicken with the skin, then chopping it into bite-sized pieces and cooling it. Then he adds the chicken and broth, plus whole corn, creamed corn and hard-boiled eggs. When the soup’s at a nice rolling boil, it’s time to add the rivels.

"Some people tell me, 'Don't make the rivels too big because I don't like to bite into the rivels'" Stoltzfus says. "The next guy comes. 'Make sure you have some big rivels. I want to bite into a rivel.'"

So he makes most of the soup with rivels smaller than bite-size. He'll make a batch of big rivels, too.

"When that guy shows up, I can say, 'Here’s your rivel soup,'" Stoltzfus says.

Pa. to close waiver process for businesses affected by coronavirus shutdown as calls for transparency mount

Public database gives Lancaster County an A- for social distancing, Pennsylvania gets a B-

Spring weather is on the horizon in Lancaster County. What are your outdoor plans this weekend?

You've just lost your job? Here's what you need to know

Memo: Some in US may not get stimulus checks until August

Here are eight chicken corn soup recipes from our archives.

How to make rivels in 5 GIFs

Here's how to make rivels.