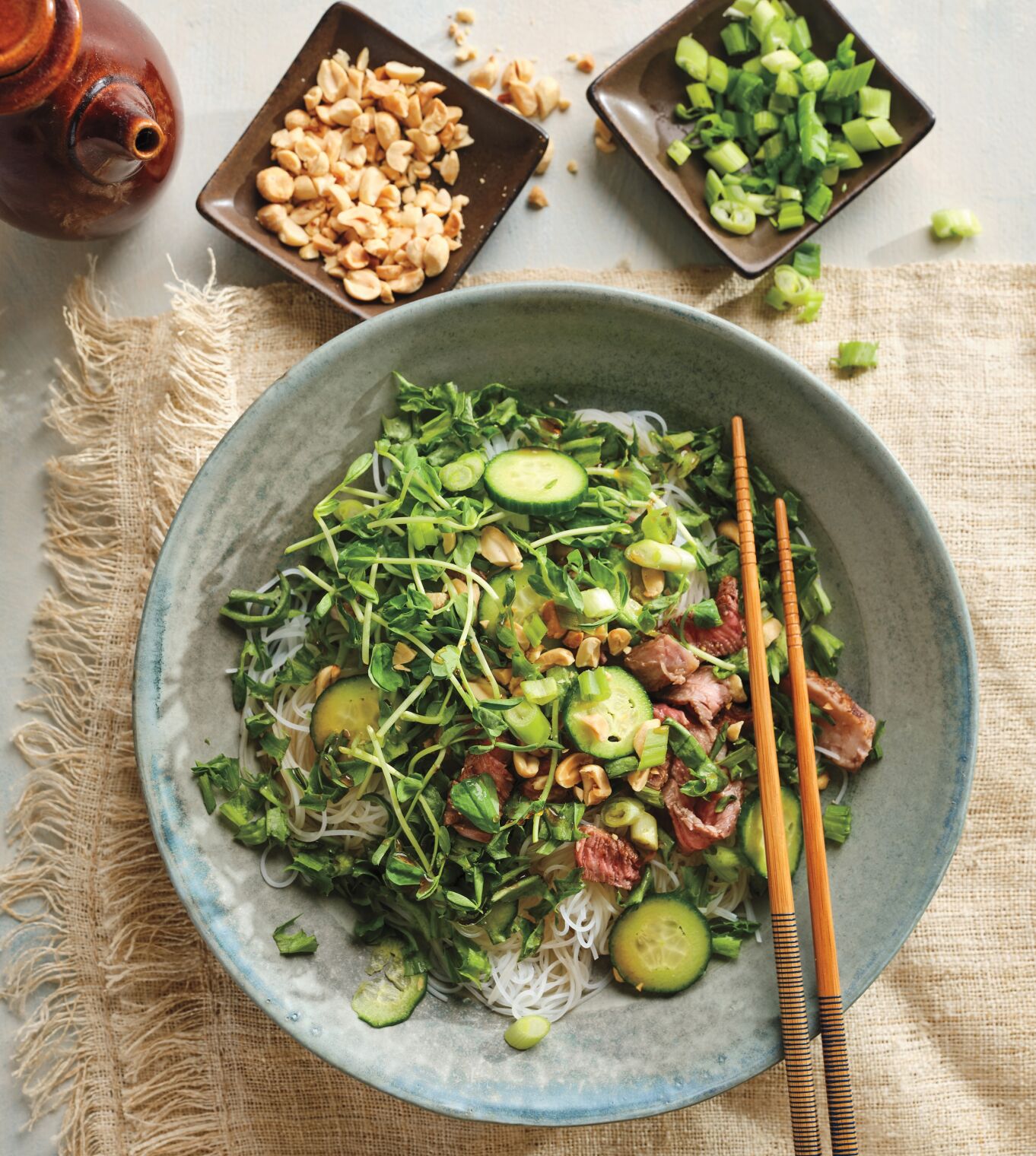 Steak Goes to Asia, from "No Recipe? No Problem!" cookbook, by Phyllis Good. 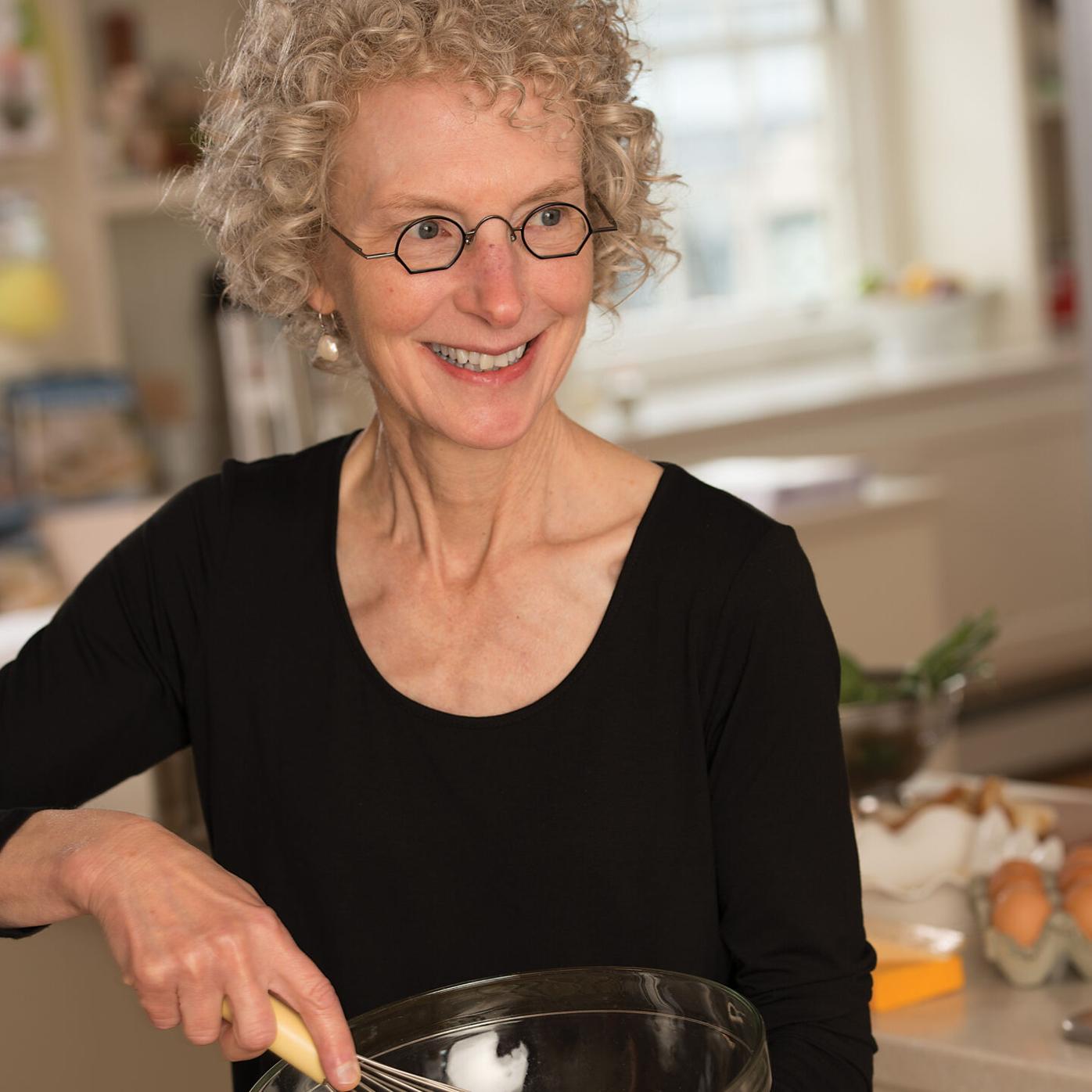 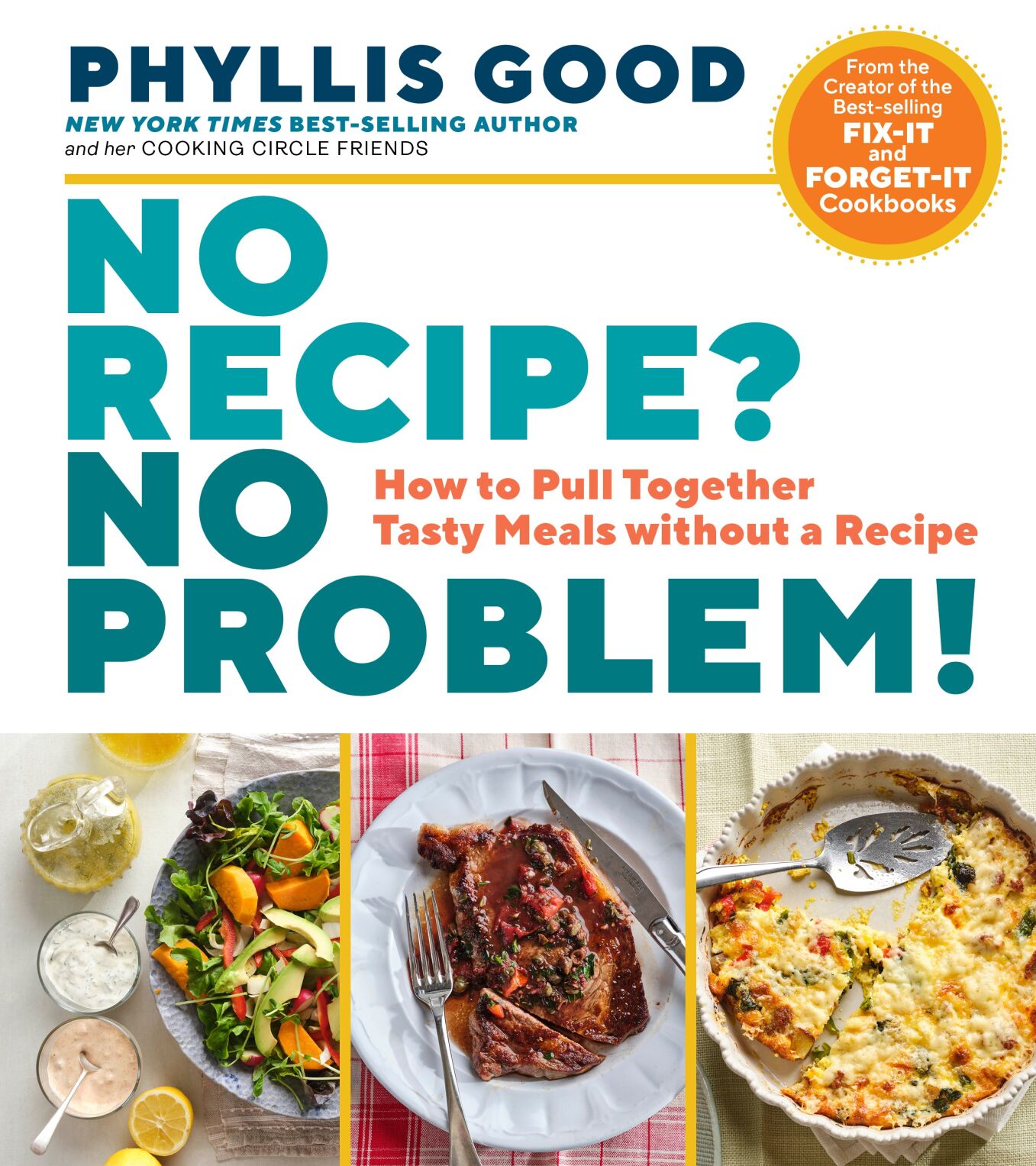 "No Recipe? No Problem!" by Phyllis Good.

Phyllis Good calls the kitchen approach she has captured in her latest cookbook “freestyle cooking” or “improvisational cooking.” It’s learning to cook without recipes — without precise measurements and a set list of ingredients. It’s learning what ingredients make up a particular flavor profile, and what disparate ingredients can be combined in harmony. It’s how to build a salad or soup, sauce or protein bowl, and how to make substitutions for ingredients you don’t have.

This latest book by Good, titled “No Recipe? No Problem!: How to Pull Together Tasty Meals without a Recipe,” is also, in a way, about cooking by committee.

One of the foundations of the book, which was published earlier this year, is a group of 14 experienced cooks from around the country and Canada — referred to by their first names, only, to protect their privacy, Good says — who offer tips on everything from flavor combos to cooking techniques, and from how to build a tasty sauce to what basic ingredients or kitchen tools you should keep in your home.

Good calls the group her Cooking Circle, which includes five people from the Lancaster area, she says.

With these experts’ tips sprinkled throughout the book, Good talks home cooks through techniques from braising to broiling, through vegetable, pasta and egg dishes and through what to combine in one-bowl or one-sheet-pan meals.

“It’s probably one of the most fun projects I’ve ever done,” Good says.

Good, of Lancaster, has sold more than 14 million cookbooks — many of them part of her bestselling “Fix It and Forget It” series — first through the former Good Books and later through Walnut Street Books, both companies she has run with her husband, Merle Good.

This book was put out by a separate publisher — Storey Publishing.

“They helped me organize this,” Phyllis Good says. “I just had a vast amount of material ... I just had a really good editor.”

We asked Good a few questions about her new book. This interview has been edited for length and clarity.

Click here to see a few excerpts from Good's book.

Have you done a cookbook like this before, with no recipes?

This is brand new. (In past books) there were always pretty clear ingredients and amounts and directions. Where, in this case, for the most part, if there’s anything like a recipe, it’s simply about combining ingredients: Here’s how to think about what may go together.

I am committed to not wasting food, as much as possible. That’s like an ethic for me. And I want to make sure that when people set out to do this, that they’re going to be successful. I think of it as sort of a road map or scaffolding.

Where and when did the idea come from for the book?

It started, I guess, a good four years ago when I was considering doing another cookbook of the kind that I’d done in the past, and I was requesting recipes, or testing the idea with a bunch of people who have been on my list of contributors. And more and more of them are saying, “Oh, I don’t use recipes anymore.” And my kids — we have two daughters who are young adults — more and more, they just don’t use recipes, and their friends don’t. And then I thought, well, you know, I’d love to cook more this way.

It seemed to me that this is a growing trend. And I think the pandemic was not foreseen at the time when I began to work on this seriously, but that really made it clear that people were looking for inspiration. And they needed a little sense of adventure.

Tell me more about how the Cooking Circle came together? Where did you find them?

Well, I’ve maintained and developed a list of great cooks through the years. So, I’m constantly working to bring in new people who I know cook well. And they always know people who cook well. I just asked them, “you’re sort of improvisational in the way you cook, aren’t you?”

I did careful questioning of them before I included them. I wanted to be really sure that we were understanding improvisational cooking in the same way. And I really have some gems in this book. It was just all I hoped for and more.

The one (circle member), Eugene, is a retired fashion designer, and he said, “Well, I just choose ingredients that look interesting to me, and then I Google, ‘things with pistachios’ and watch what comes up. ... I just look at the pictures and then that gives me ideas.” And it turns out, he’s lived a very secular life, but his mother had Amish roots and he credits her with learning to respect ingredients, and how formative that has been in his cooking.

One of the great gems in here is from a guy who lives here in the city. He said, “Well, we don’t grow lemons in Lancaster, but I really like what acids do for a dish. We grow rhubarb, and I just keep a lot of chopped rhubarb in the freezer, and it’s tangy, it has a different flavor. It will chemically do the same kind of brightening (as lemons) and giving life to a kind of dull dish.”

And then ... somebody else (in the circle) said, if you want to experiment with adding a flavor, don’t just stir it into the big pot, and if it doesn’t work, then there goes the whole pot. Put it in a little corner of the dish, and just taste it. Or scoop out two spoonfuls into a cup and add a smidgen of it there, stir it up there and just taste it and see if that does work.

So, it’s practical. I said this book is a road map, it’s scaffolding, but it’s also like hanging around in the kitchen with some of the best cooks you could imagine who are great storytellers, and they just love what happens when they get working in the kitchen.

What have you learned from your Cooking Circle, and what kind of tips from them have gone into the book?

One is the function of sauces, and how redeeming a sauce can be, if you’ve created something but it isn’t quite the whole way there. Let’s say you’ve done a pork tenderloin, in a saute pan, and it’s got these gorgeous brown bits left on the bottom of it, add some white wine and just stir it loosely over low heat and it loosens it up magically. And then ask, “Do I want to add a little tarragon to this, dry or fresh?” You can try it and taste it, and pretty soon you have a lovely sauce. Either you can eat it as is, or you can put it over pasta or over grain, or over vegetables.

We’ve been brought up in a tradition around here where all you need to do is put brown butter on something. But you can actually saute some shallots in that, or some garlic, and cut up a few dried tomatoes.

And there’s another gem from (circle member) Margaret, who’s another friend of mine here in the city. She said, “I do what I call ‘planned-overs,’ not leftovers. I purposely make a double the batch of quinoa or black beans whatever you’re having, and they’re like my deposit against the next meal.” If you’re going to do “planned-overs,” don’t season that initial batch of whatever it is you’ve made. Because that is going to limit you when it comes to making the second meal.

I learned a lot about substitutions. Corn and potatoes are both significant carbs, and we think of potatoes as maybe a kind of a filler for a stew or a base for something you want to put on top. But if you don’t have potatoes and you’ve really got your heart set on something that needs a good steady carb in the center of it, corn will work in many cases.

Who do you see as your audience for this book?

It’s several audiences. It’s people like me who have been cooking for a long time and would like just a little guidance. I’m not bored with good recipes. But I would like a little help to be a little freer.

Others are people like my daughters’ friends, who think they’re really good at this, but if you ask the people who have been at their table, how is it, they’ll say, eh, hit or miss. I want to respect their sense of adventure and confidence, but I’d like to just give them a few tips. (For example), chicken breasts can be overcooked in a minute. If you use chicken thighs, you probably will have a much more succulent dish.

It’s for them that I put in the “cheat sheets” and the formulas about how to do grains properly, what proportion of liquid and grain, and how long you should cook it.

Has your personal cooking style changed during the pandemic?

Yes, I was very influenced by this book. I felt such gratitude. It sort of set me up to do more of what I wouldn’t have otherwise done, I think. It made me more adventuresome because of what I had learned; I felt, I can do this. I understand the principles of it.

37 holiday events in Lancaster County to go to this week, from pet pics with Santa to holiday markets

The holiday season is here, and Lancaster County has several ways for you to celebrate.

It’s a local snapshot of Lancaster County baked into a children’s book.

A look inside 'no-recipe recipes' from Phyllis Good's latest cookbook

WAYS TO DRESS UP GRILLED VEGETABLES

A sample of tips from “No Recipe? No Problem!”

Your guide to making a gingerbread house [recipes]

’Tis the season of cookie bakes, candy canes and gingerbread houses trimmed with peppermints and gumdrops.