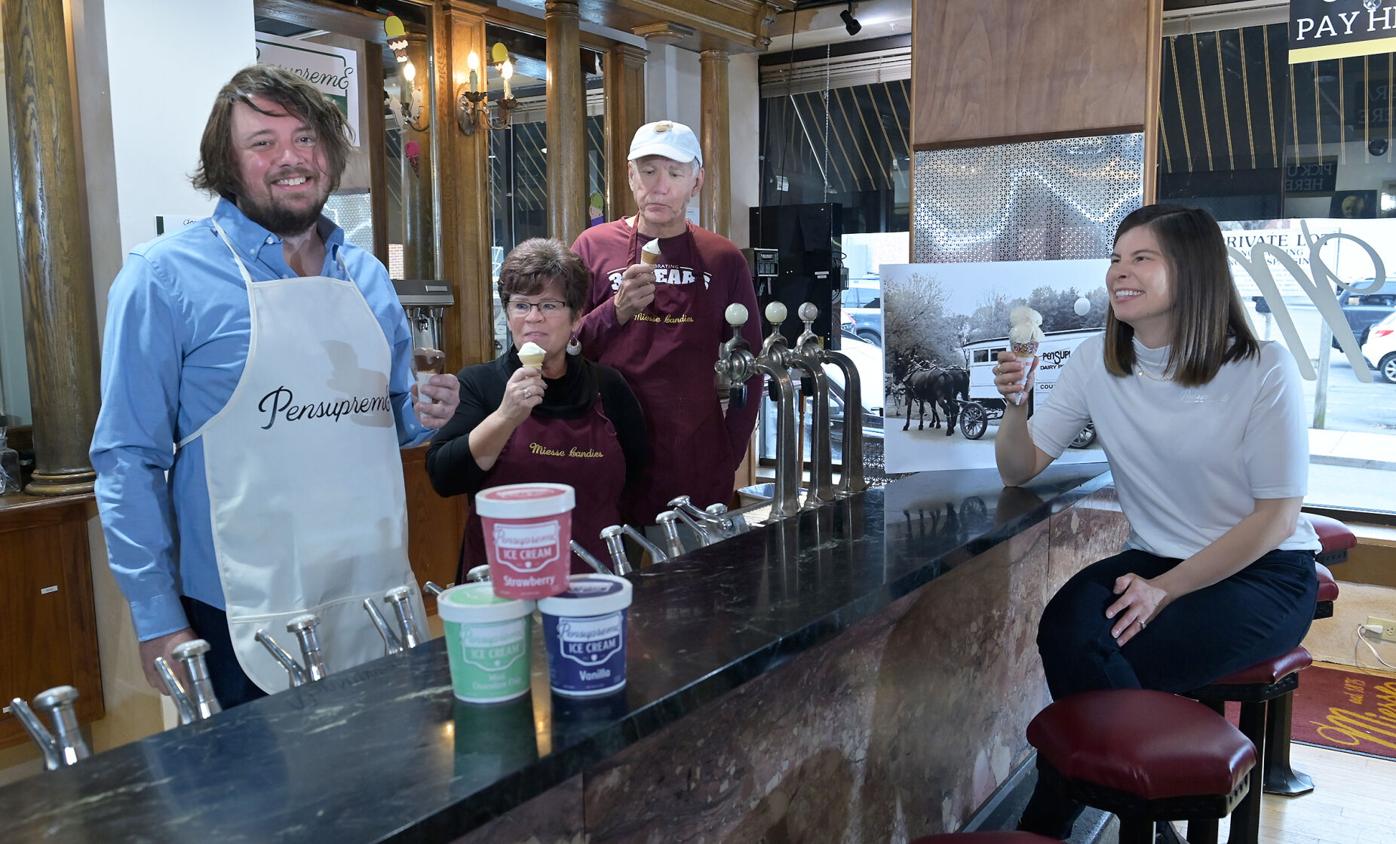 Pensupreme ice cream is making a comeback in Lancaster County and launching four flavors at Miesse Candies, the first local business to carry the brand. Sharing a laugh while enjoying an afternoon snack, are business partners, John Butz, left, and Ingrid Natale, right, who are pictured with Miesse's owner, Tracy Artus, and her husband Bob Artus on Monday, Jan., 3, 2022. 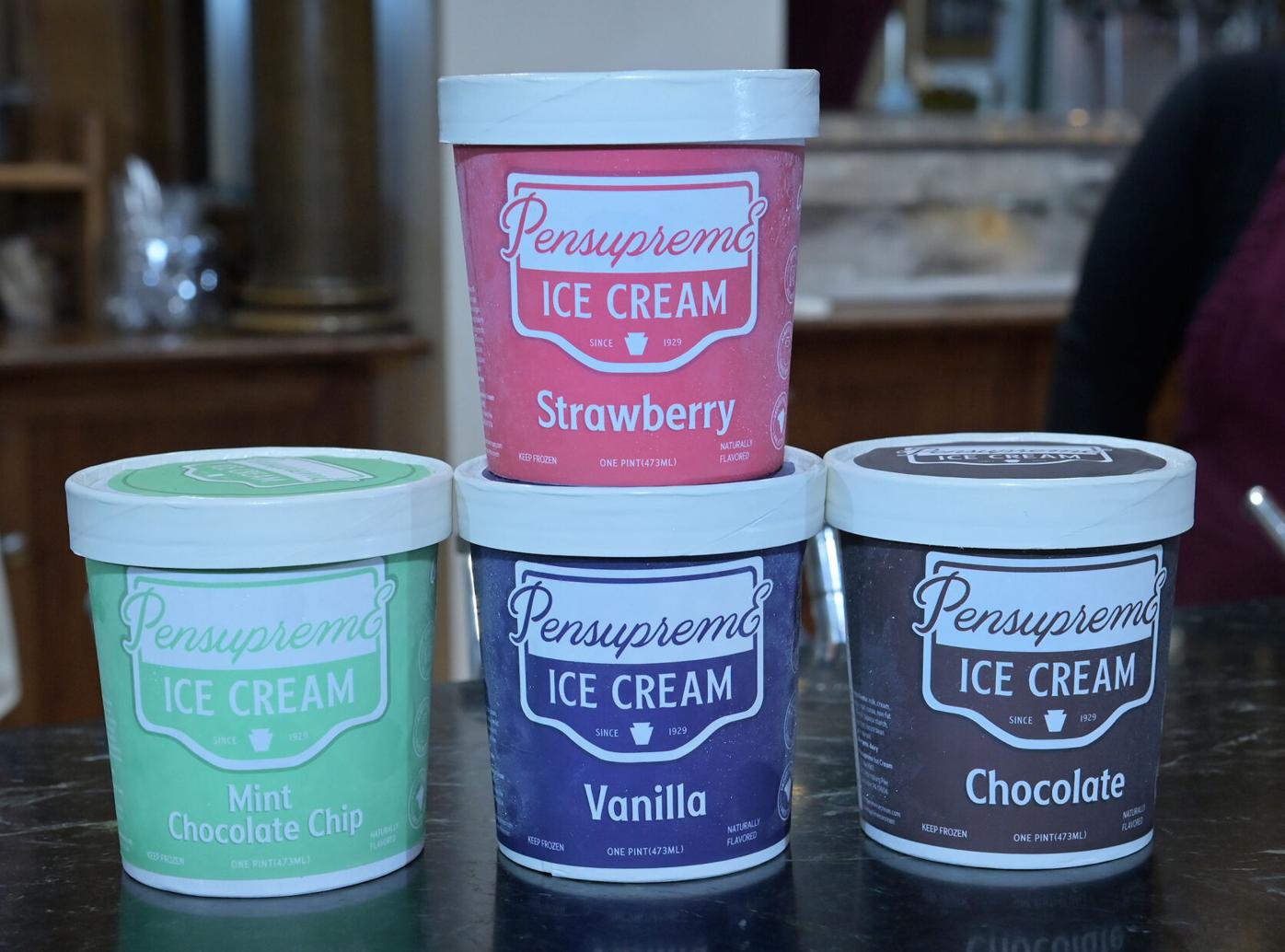 Pensupreme ice cream is making a comeback in Lancaster County and launching four flavors at Miesse Candies, the first local business to carry the brand. Business partners, John Butz and Ingrid Natale, who have paired with Miesse's owner Tracy Artus, to announce the return of the brand after leaving the area in the late 90's on Monday, Jan., 3, 2022. 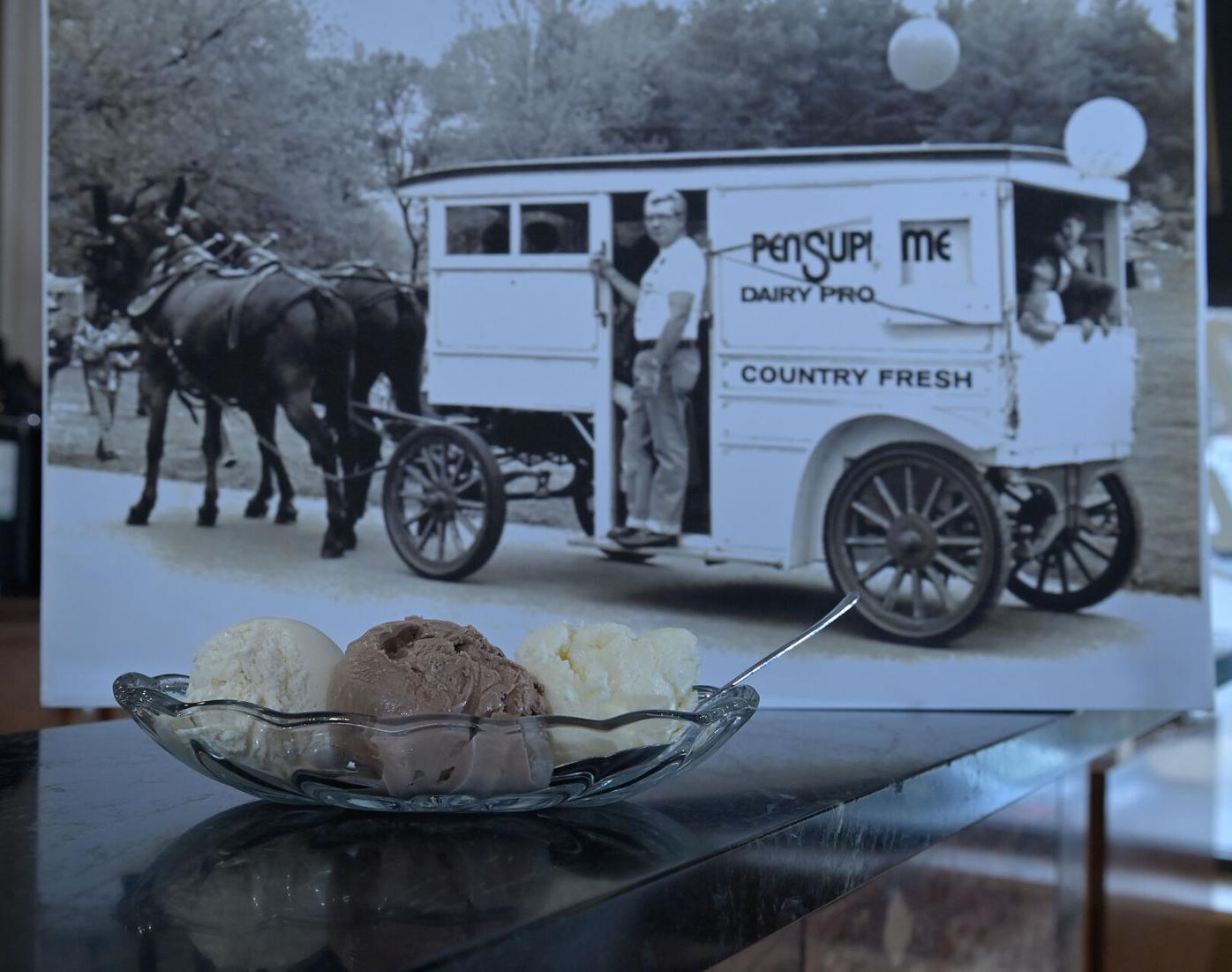 Pensupreme, then and now: A vintage photo of the late Joe Gray, Tracy Artus' great uncle, who worked for more than three decades at Pensupreme. In the foreground, a sundae dish of the newly revived vanilla, chocolate and strawberry flavors.

If you grew up in central Pennsylvania and are old enough to remember Pensupreme ice cream, we have some news for you: Pensupreme has come back to the future, and it’s available for sale at a Lancaster city shop.

Founded by Lancaster-based Penn Dairies Inc., the original product line (along with an eponymous chain of convenience stores and dairy “shoppe” restaurants), was a cultural touchstone for more than four decades in Lancaster and surrounding counties. By 1989, when the stores were acquired by Getty Petroleum Corp. and dairy production was sold in 1990 to a New York conglomerate, a legion of Pensupreme fans was left with taste memories.

Fast forward 25 years, the grandson of a former Penn Dairies executive applied to buy the Pensupreme trademark, which had expired. A passionate vintage milk bottle collector, John Butz, 37, hatched his idea for a Pensupreme revival with his pal Ingrid Natale, 33, who had both a head for business and, like Butz, grew up with Pensupreme in the family freezer.

It would take nearly seven years for their idea to become reality. In December, the duo did a soft launch at the Lancaster Holiday Market in Buchanan Park, selling pints of their “four core” flavors — vanilla, chocolate, strawberry and mint chocolate chip — made from central Pennsylvania grass-fed dairy cow milk. They put the word out on Facebook, and that’s where Tracy Artus — and a little bit of kismet — enters the equation.

Artus has owned Miesse Candies since 2011. In 2018, she expanded her Water Street location to include an ice cream parlor with a 1,000-pound vintage soda fountain from York hoisted through the front window. Of course, there would be ice cream from local creameries, she said. But the pandemic brought many headaches, including ice-cream supply issues.

In December, Artus was still looking for a reliable ice cream supplier. She wondered what this so-called Facebook post about a Pensupreme revival was all about. And of course, she couldn’t help but think about her great-uncle, Joe Gray, who had just passed away at 97. When Uncle Joe came home from serving in World War II, his sister-in-law helped get him a job at Penn Dairies, where he worked in sales until 1985.

Artus didn’t grow up in Lancaster, but her mother did, and the family roots were strong. It’s where her mom met her future husband — on the dance floor at the USO in downtown Lancaster. When they came to visit her grandmother, Pensupreme was in the freezer and Miesse nonpareil candies were in the candy dish.

With her husband, Bob, in tow, Artus went to give Pensupreme version 2.0 (or is it 2.0.22?) a try and got her kids and grandkids involved in the tasting. The vote was unanimous: The ice cream was a winner.

“The vanilla is exactly as I remember it,” Artus says. (Guess who has a new ice cream supplier?)

Ingrid Natale: “It depends on the time of day. Strawberry in the morning is incredible. Mint chocolate chip late at night, almost like a digestive, to help you sleep. And chocolate, always with dinner.”

The recipe is inspired by the original, says Butz, with two main differences: “It’s made from all grass-fed dairy, which is a big deal, and you can really taste the cream. It’s a super-premium ice cream (versus premium), which means it has a higher milkfat content. And we think that makes it a better product.”

The cream in question is coming from central Pennsylvania farms, with upwards of 25 dairy producers involved. Butz and Natale have also partnered with a central Pennsylvania creamery doing small batch production, without artificial colors or flavors. (That name is being withheld until they are legally able to share.)

Miesse began carrying Pensupreme last week by the pint ($8.99) and at the soda fountain. For now, it is the only place to get your hands on some, but Butz and Natale are actively looking for additional wholesale partners. They are also exploring additional flavors and ultimately bringing ice-cream production back to Lancaster.

For Artus, the ice cream “makes my heart sing, that something that was part of our family is back again.”

For Natale, she sees it as a way of “enriching the community.” And Butz is thinking about the ripple effects.

“Everyone in Lancaster has a family member or friend who worked at Penn Dairies or Pensupreme,” she says. “This is bigger than just us.”

After nearly 30 years, the long-beloved Pensupreme ice cream has come back to life, thanks t…

If you've been hankering for a pick-me-up amid the post-holiday doldrums, never fear: Girl Scout cookies are here.

Soup season is here; warm up with this curried winter squash puree [recipe]

The residents of the winter squash gallery were giving me a look. In late October, when I brought six beauties home from Brook Lawn Farm Marke…