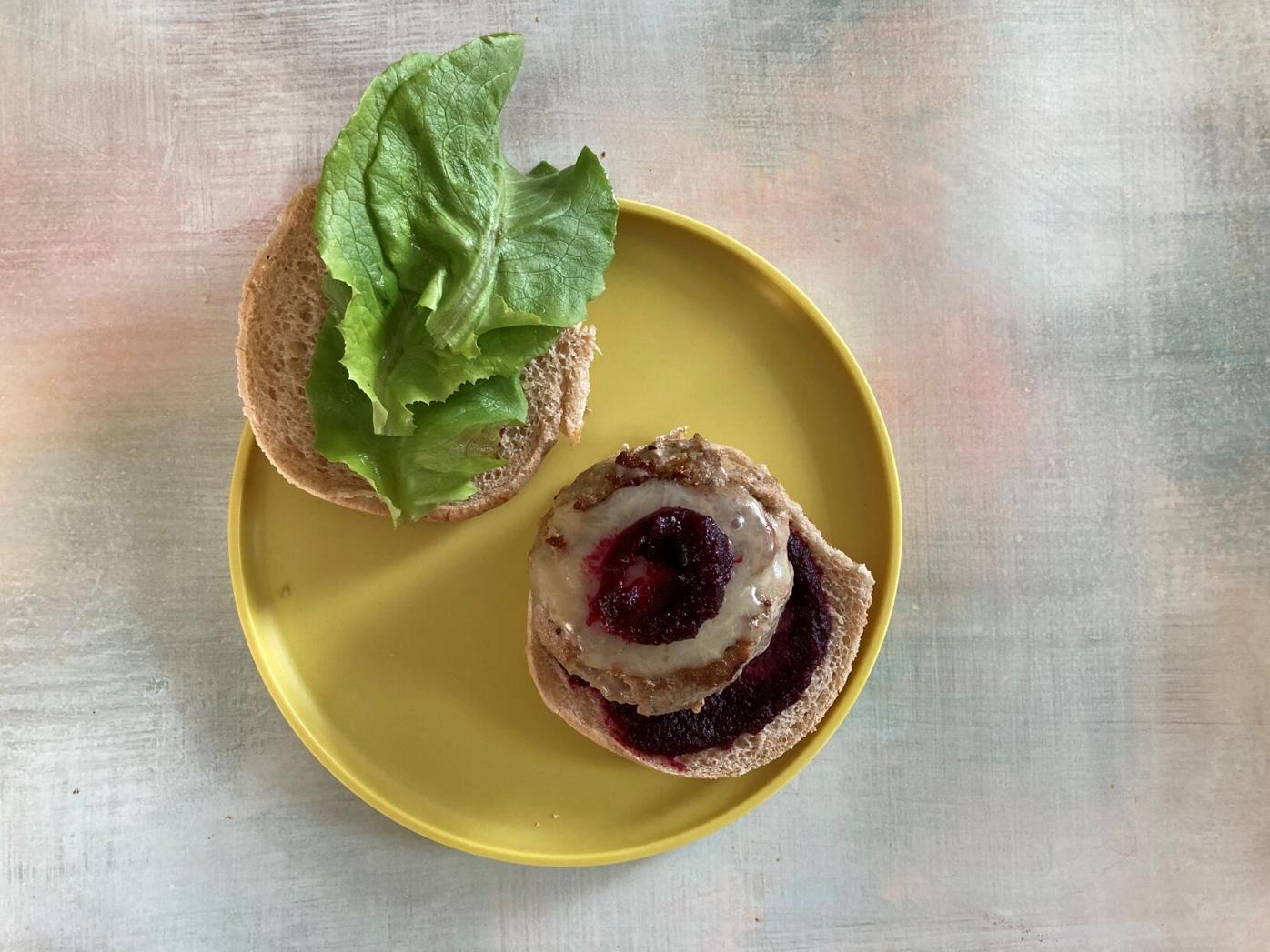 Beet ketchup, smeared on top and below a turkey burger, is smooth, rich and surprisingly unbeet-like. 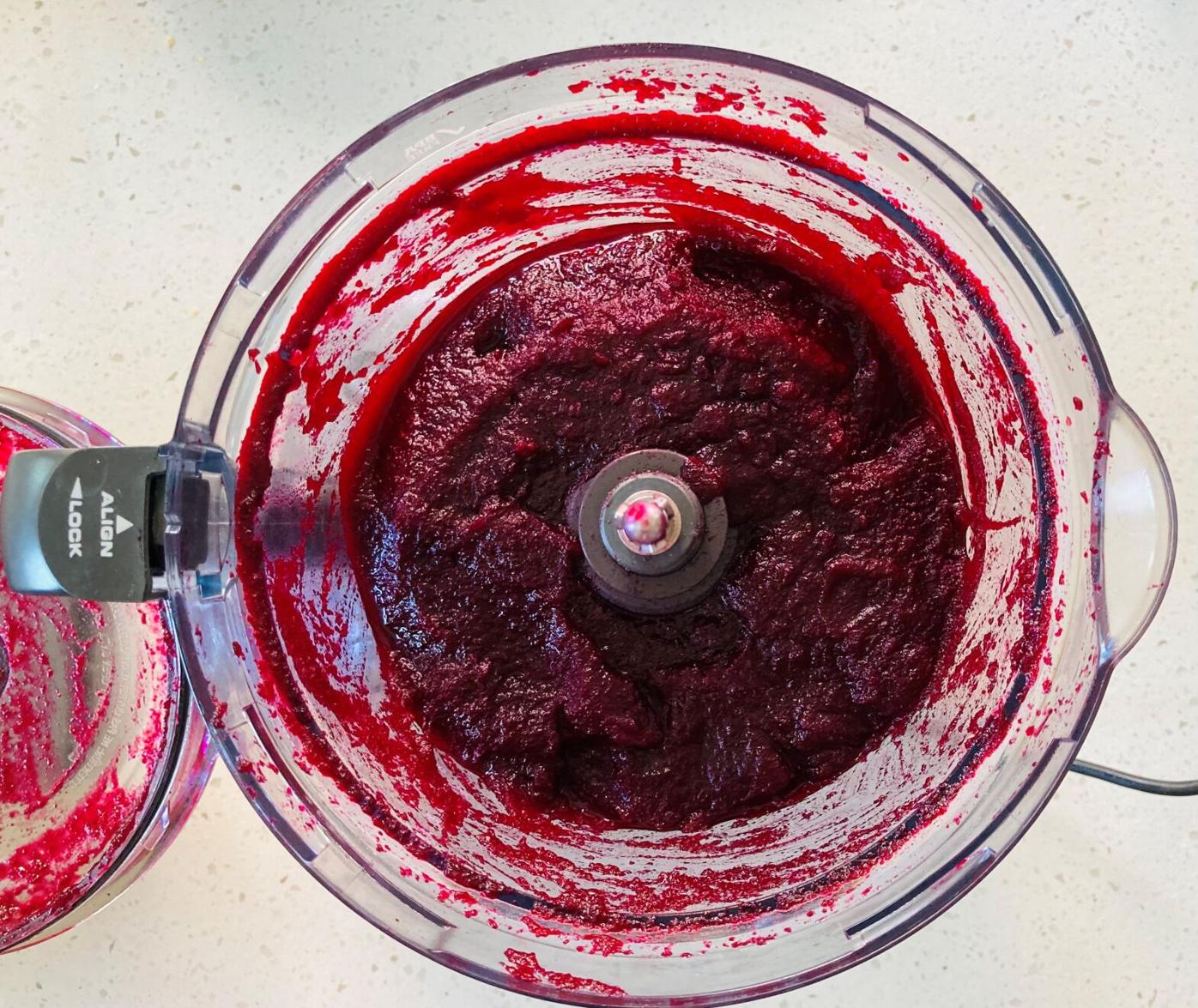 If the recent shortage of single-use ketchup packets had been announced in summer, when Lancaster County is teeming with fresh tomatoes, I would be leading the charge for kitchen ketchup making, coast to coast. But local tomato season is still three months away, a likely eternity for fanatics of the crimson condiment.

For guidance on homemade workarounds to this ketchup conundrum, I turned to Philadelphia-based preserving expert Marisa McClellan. The author of four cookbooks on small-batch preserving, McClellan recently reminded me that there is a long American tradition of making ketchup without any tomatoes whatsoever. Colonial-era cookbooks written by Martha Washington and others included details for turning pickled oysters and mushrooms into ketchup, derived from the Chinese pickled fish brine known as Ke-tsiap.

By the 19th century, tomatoes were considered a ketchup-worthy ingredient; a recipe for Tomato Catsup was included in “The Virginia House-wife; Or, Methodical Cook” by Mary Randolph, published in 1824. Fruit also would be turned into ketchup; in the 1930 edition of “The Boston Cooking-School Cookbook” by Fannie Merritt Farmer, there are three recipes for fruit-focused ketchups, starring apples, gooseberries and grapes.

With this history lesson under my belt, McClellan’s suggestion that I make ketchup from beets — yes, beets — did not seem so strange after all. Plus, it would be a great alternative for people allergic to nightshades, a group of plants including tomatoes, eggplants and potatoes.

Anticipating the inevitable question, McClellan assured me that the beets are not overpowering.

“You’d be surprised at how the beets’ natural earthiness disappears into the traditional ketchup spices,” she said in an email. “Their innate sweetness means that you don’t need much additional sweetener to make the ketchup delicious and their dense texture means that the cooking time is a whole lot shorter than with tomatoes.”

She’s right. The end result is smooth, rich and minimally beet-y. Even my beet-hating husband gave the

purple stuff a thumbs up. We spread it onto turkey burgers and declared it delicious — and an exceptional Plan B to the same ole tomato story.

Adapted from “Naturally Sweet Food in Jars” by Marisa McClellan.

1. Place the beets in a large saucepan, completely cover with cold water and bring to a boil over medium-high heat. Reduce the heat to medium, cover and cook the beets until a paring knife pierces them easily, about 1 hour. Drain and let cool under cold running water. Once cool to the touch, peel and finely chop the beets. Note: You can do this step a day in advance.

2. Place the chopped beets, vinegar, sugar and onion in a large saucepan over high heat, stirring until the sugar is dissolved. Bring to a vigorous boil, then lower the heat to medium, cooking until the beets are soft and they have broken down into a thick pulp, about 20 minutes. (You can use a potato masher to test their readiness.)

3. Remove from heat and cool for at least 10 minutes. (Hot splattering beets landing on your skin is no fun.) Puree the beets with an immersion blender, high-powered stand blender or food processor until very well blended, up to 5 minutes, depending on the appliance. The mixture will be thick but it should not be chunky.

4. Wipe pot as needed (especially if using a blender or food processor) and return puree to pot. Add salt, cloves, coriander and black pepper, stirring until combined, over medium heat. Add a few tablespoons of the water to help keep the puree from scalding, adding more as needed. Cook until the puree is thick and smooth, 15 to 30 minutes. Taste and re-season as needed.

5. Remove from heat and cool completely before portioning into small jars. Keeps in the refrigerator for a few weeks and for a few months in the freezer. If freezing, be sure to use freezer-safe jars.

Note: This recipe was developed for water bath canning. If you would like to process the jars using the water bath method, process for 15 minutes in half-pint jars.

5 local plants to safely forage and cook this spring

Your backyard vegetable garden may be weeks away from its first harvest. But if you’re game …

How to amp up your pesto game with stinging nettle [recipe]

In Latin, she goes by Urtica dioica, but you may know her as "stinging nettle." The word "st…

4 ways to use in-season fresh spinach, from risotto to pancakes [recipes]

Thanks to a recent stretch of mild sun-filled days and cool nights, fresh spinach is back in…

Cupboard cooking: Meal ideas for when there's 'nothing' to eat

Raise your hand if this sounds familiar: The day has gone long, and you have not had a momen…

Beets are deeply pigmented and like to spatter and stain whatever they come in contact with. Protect yourself with gloves, an apron and or an old t-shirt. You may notice that your work surface may need extra clean-up as well. McClellan suggests using a splatter screen when cooking the beet puree; I recommend using stainless cookware versus enamel cast-iron.

What's the deal with coconut sugar?

In her book, "Naturally Sweet Food in Jars," McClellan developed 100 recipes using unrefined alternatives to granulated sugar. Among them is coconut sugar (also known as coconut palm sugar), a caramel-colored sugar made from the sap of the flower blossoms of the coconut palm tree. Despite its name, coconut sugar does not taste of coconut, but more like brown sugar. If coconut sugar is unavailable, use brown sugar in its place in the beet ketchup recipe.

23 best restaurants to get a hoagie in Lancaster County, as picked by LancasterOnline readers

While May 5 is typically associated with Cinco De Mayo, Americans across the country also celebrate the culinary pride of southeast Pennsylvan…

5 tips for making the best tuna melt ever [recipe]

Hot tuna casserole was in the meal rotation of my 1970s youth. If you’re old enough to remember, you too can still visualize the tall box of T…

This time of year takes me back 30-plus-three years to an alley in West Philadelphia. Newly minted college graduates, my pal El and I spent a …