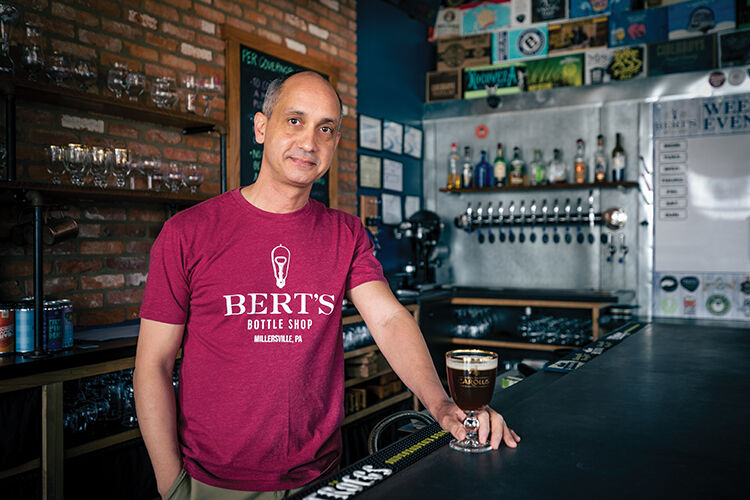 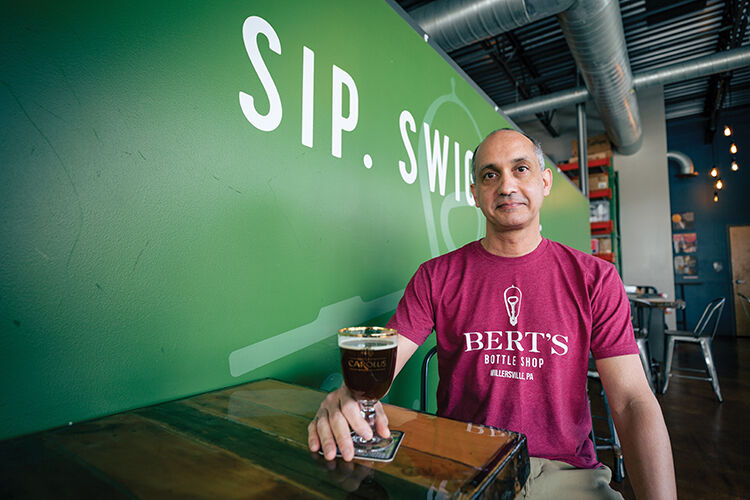 Like his father before him, Alberto “Bert” Flores went into computer science, choosing it as his major at Drexel University.

He has spent more than 33 years in information technology, most of it as a computer network engineer.

But a few years ago, when the business had become all-consuming, he got the idea that he might want to open a bottle shop — “just making a warm, inviting place that people would want to come to.”

At age 47 — with only his family’s financial resources and without any experience in the food and beverage industry — Flores made reinvention a reality in March 2017 when he opened Bert’s Bottle Shop in Millersville Commons.

Though he still does some IT consulting work, he’s working at the shop nearly every day, Tuesdays through Sundays.

The shop has 49 seats inside and about 60 on the outdoor patio; it offers 16 beers on tap, a choice of 350 beers and ciders to drink there or take out and a menu that features wings and flatbreads.

“I thought I wanted to be a programmer, like my dad, when I first started,” Flores recalls. “And, within the first two or three years, I learned that I didn't want to program because I like to be out and talking to people, and I’m very outgoing. Drinking a gallon of Turkey Hill ice tea and working 14-hour days, it wasn’t for me.”

He became a computer engineer — “infrastructure, servers, workstations, wireless, everything the IT world entails,” Flores explains. “I had been a system admin for a while, and then I worked for different large and small corporations.”

But, the nature of his job threatened to put a strain on life with his wife and kids.

“With what I do and did, it’s not a 9 to 5,” Flores says. “For me, I’m a relationship person. When my customers entrust me with their networks and all their systems, they’re my systems. So if they go down at 10 or 11 at night, I’m the one staying up worrying about it.”

He realized he didn’t want to keep clicking keys and staring at computer screens into his 60s.

“I talked to my wife about a transition-out plan,” he says.

About 10 years ago, Flores got interested in a variety of beers, including Belgians, IPAs and bourbon barrel-aged stouts.

He started a beer club in which he’d buy a case of an interesting beer and split it among friends so they could talk about the beer later.

“That went from six people to 12 to 18 to 24,” he says. He started wondering whether he could “parlay that into a tangible business — and here we are.”

He visited 40 different bottle shops around the region to see what worked and what didn’t.  He had IT customers who were beer wholesalers; he learned from them, as well.

“My favorite thing about running the business is the sense of community that we have here,” he says. “We’ve always lived here. My wife and I both went to Penn Manor, and we're connected. This is our home.”

“It’s amazing that we had those three years to build up a following” before COVID-19 hit, Flores says.

Though Bert’s has stayed open throughout the pandemic, aside from a few days in May 2020, Flores admits it has been a challenge.

“The worst thing was having to lay off our employees, and that’s when we modified our hours and then I was here almost every hour that we were open,” Flores says.

Of the 17 mostly part-time employees he had before the pandemic, he’s been able to bring back about eight.

“Our customers have been so generous and gracious in helping us through this,” he says.

“It has been a struggle, and I’ve leaned heavily on my family for those months — my kids and my wife, coming in (when) we need them.”

A GoFundMe drive with a goal of raising $20,000 to keep the shop going until business is back to normal raised $24,000 in four or five days, all from loyal customers, Flores says.

For those who may also be thinking of opening their own businesses at mid-life, Flores advises, “make sure your energy levels are up. Because it’s a lot of work. … You need to be here. You need to be engaged in the business.

“It's rare to find a business you can transition to that is on autopilot,” Flores says. “You have to make sure all the things you want done are being done and you have to mind your Ps and Qs, for sure.”

What's your favorite local restaurant to get a hoagie from? Let us know. [survey]

On May 5, citizens across the United States celebrate National Hoagie Day. A day in which we…

This time last year, Jazmine Rivera didn’t know she would be a cook, let alone own her own t…

Sleep – everyone does it, but few seem to do it well.

Hometown: Born on a U.S. Army base in Germany; grew up in Washington Boro, and graduated from Penn Manor High School.

On reinvention: “Do all your research and know what you’re getting into. And get a good accountant, right from the get-go."

Dress (others) for success: Lisa Torba went from insurance sales to image consulting

23 best restaurants to get a hoagie in Lancaster County, as picked by LancasterOnline readers

While May 5 is typically associated with Cinco De Mayo, Americans across the country also celebrate the culinary pride of southeast Pennsylvan…

With more than 5,100 farms throughout the county, Lancaster leads the commonwealth, representing about 10 percent of all PA farms, according t…