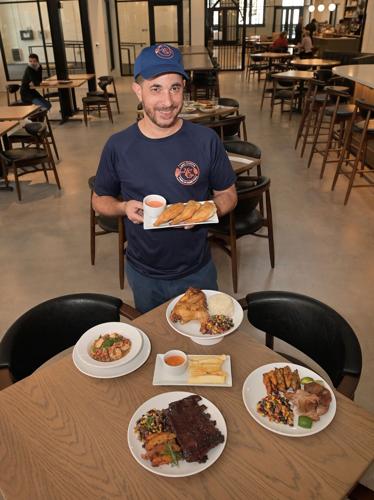 Eddy Rodriguez of 4E'S Latin Cuisine, pictured with several of his featured dishes as one of 10 food vendors at Southern Market. 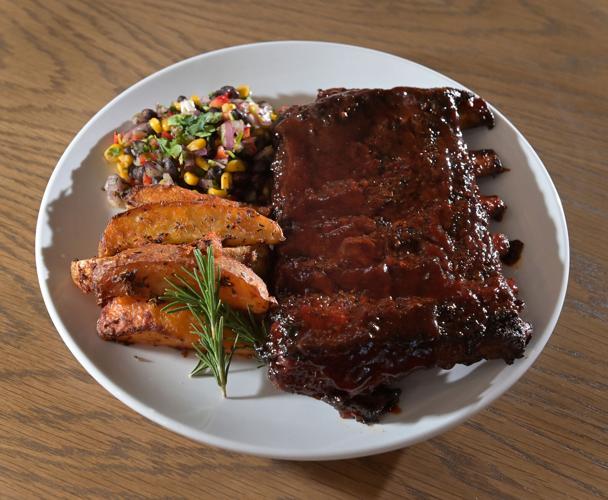 One of Eddy Rodriguez's featured dishes is his maple BBQ ribs, roasted potatoes and black bean and corn salad from 4 E’s Latin Cuisine.

From the 1880s to the 1980s, the Queen Anne-style brick building at the corner of South Queen and West Vine streets was known as Farmer’s Southern Market. Designed by Lancaster’s own C. Emlen Urban, the building operated as a farmers market, one of several that served neighborhoods throughout Lancaster city in the late 19th century (and into the first half of the 20th).

For nearly four decades, the building served as office space for city agencies, its future left to the imagination. On Thursday, it begins a new chapter, as Southern Market, completely revitalized and officially back as a public space. The first-floor food hall encompasses 3,000 square feet, with seating for 250. In the middle is Bar 1888, a 30-seat bar operated by Willow Valley Communities, with mixologist Steve Wood at the helm.

From any bar seat, you have a view of eight local food entrepreneurs making their debut as a brick-and-mortar restaurant. The chef vendors are part of Willow Valley’s food incubator partnership with Lancaster Equity and ASSETS. The idea, says general manager Mary Ellen Davis, is that vendors will have the exposure and start-up support to help them grow and launch the next phase of their businesses within 16 to 20 months. The food offerings are notably diverse, reflecting cuisine from five parts of the world, as are the extended business hours, which include Sunday.

“This will be the place to be in downtown Lancaster,” Davis said.

We catch up with one of these emerging chefs, who shares where and how he got started and what food means to him. Go here for a complete list of Southern Market vendors.

A dream fulfilled is how Eddy Rodriguez describes the latest chapter of his culinary career. After more than 20 years of cooking for someone else, Rodriguez is at last calling the shots with the opening of his Dominican-inspired 4 E’s Latin Cuisine.

For Rodriguez, 42, food and family go hand in hand. Born in the Dominican Republic, Rodriguez is one of six siblings in a tight-knit family. From an early age, he had an interest in cooking, learning by his mother’s side. In 1994, the family packed up and moved to the Bronx for a new life. He was 15.

By 18, Rodriguez was working in fast food while pursuing a degree in HVAC, or heating, ventilation and air conditioning. Although HVAC seemed like a practical choice at the time, Rodriguez was more interested in the heating and cooling of food. In the end, cooking would become his chosen path. Several years working in corporate cafeterias and catering outfits led to running a Meals on Wheels program in East Harlem, where he oversaw 700 meals a day.

In 2017, Rodriguez moved his young family to Lancaster, which his sister has called home for 20 years.

“The farmland and access to fresh ingredients in Lancaster was very attractive,” he said. “I like shopping at farm stands and when I have the time. I like to garden.”

Here in Lancaster, Rodriguez ran the kitchen at Legend Senior Living in Lititz and Garden Spot Village in New Holland. Most recently, he spent just over a year at the Spanish American Civic Association, where he and his team prepared 400 meals a day for three different community programs.

This new venture at Southern Market means that Rodriguez’s days of cooking someone else’s food are over. He’s serving up a mix of Dominican classics – pernil, yucca fries, fried empanadas, to name a few – along with his own creations, including a ceviche-style shrimp salad and slow-cooked ribs lacquered with a maple barbecue sauce.

From Morocco to Lancaster: Meet the chef making the food of her homeland at the new Southern Market

From the 1880s to the 1980s, the Queen Anne-style brick building at the corner of South Quee…

After an extensive renovation to the circa-1888 building designed by C. Emlen Urban, Southern Market reopens to the public at 4 p.m. Thursday,…

Here's what vendors will be in Southern Market's food hall

The long-awaited completely revitalized Southern Market opens to the public this Thursday. T…

Wednesday, Thursday and Sunday, noon to 9 p.m.; Friday and Saturday, noon to 10 p.m. Butter and Bean (coffee and tea) open 7 a.m. to 2 p.m. Wednesday through Sunday. Closed Monday and Tuesday.

Finally! I had always wondered why my two older brothers had picked on me so much when I was younger.

Before 1930, Lancastrians did their grocery shopping at the farmers market in their respective neighborhoods, and in many cases, they did this…

36 years after the historic Southern Farmers Market closed and the building became office space, its set to reopen today with food vendors off…

Our guide to 14 international grocery stores in Lancaster County

There’s a big world out there, even in a small town, even in a pandemic. A passport is unnecessary; curious travelers can explore dozens of co…