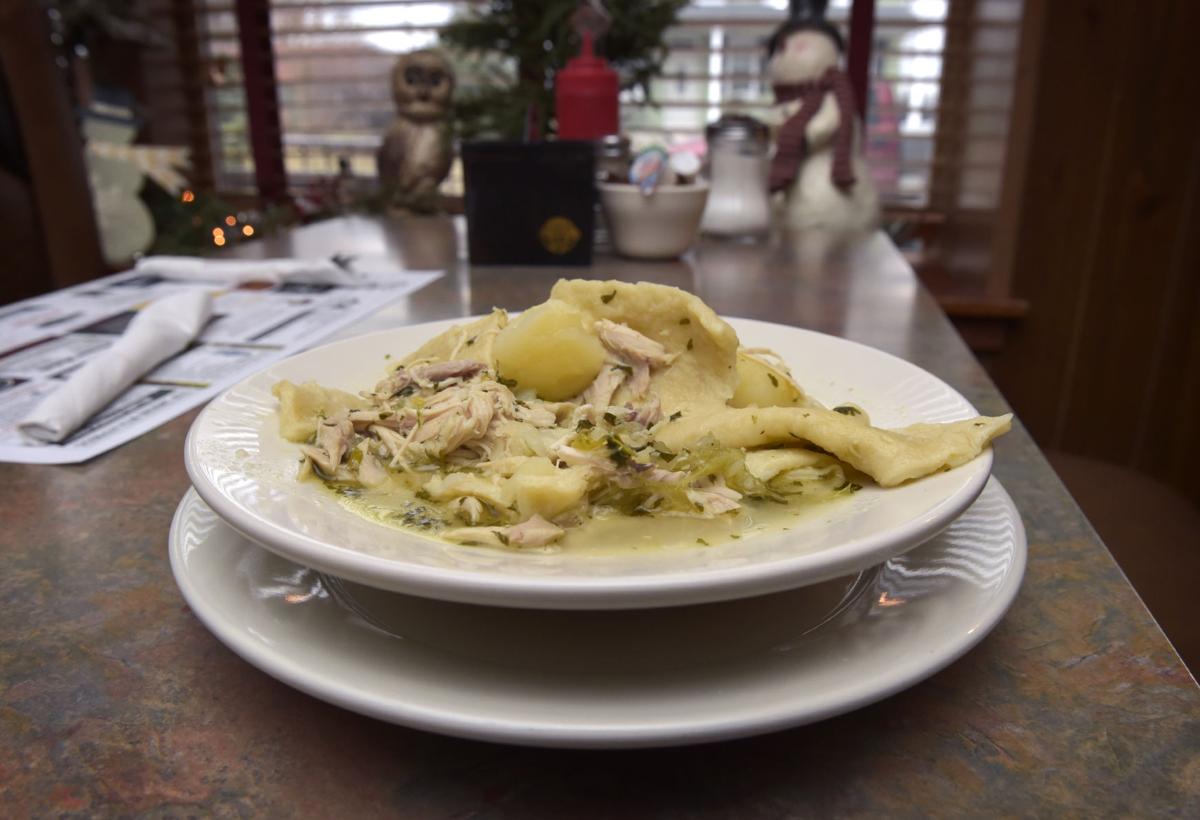 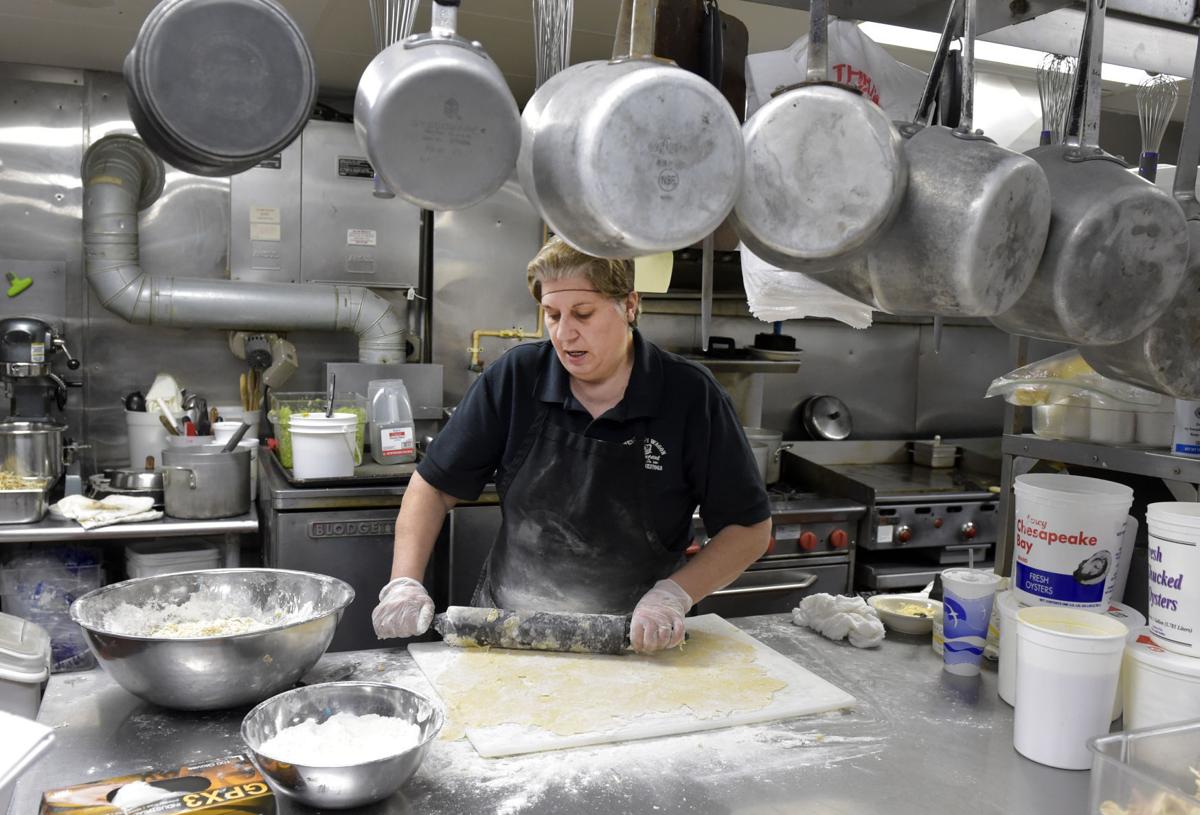 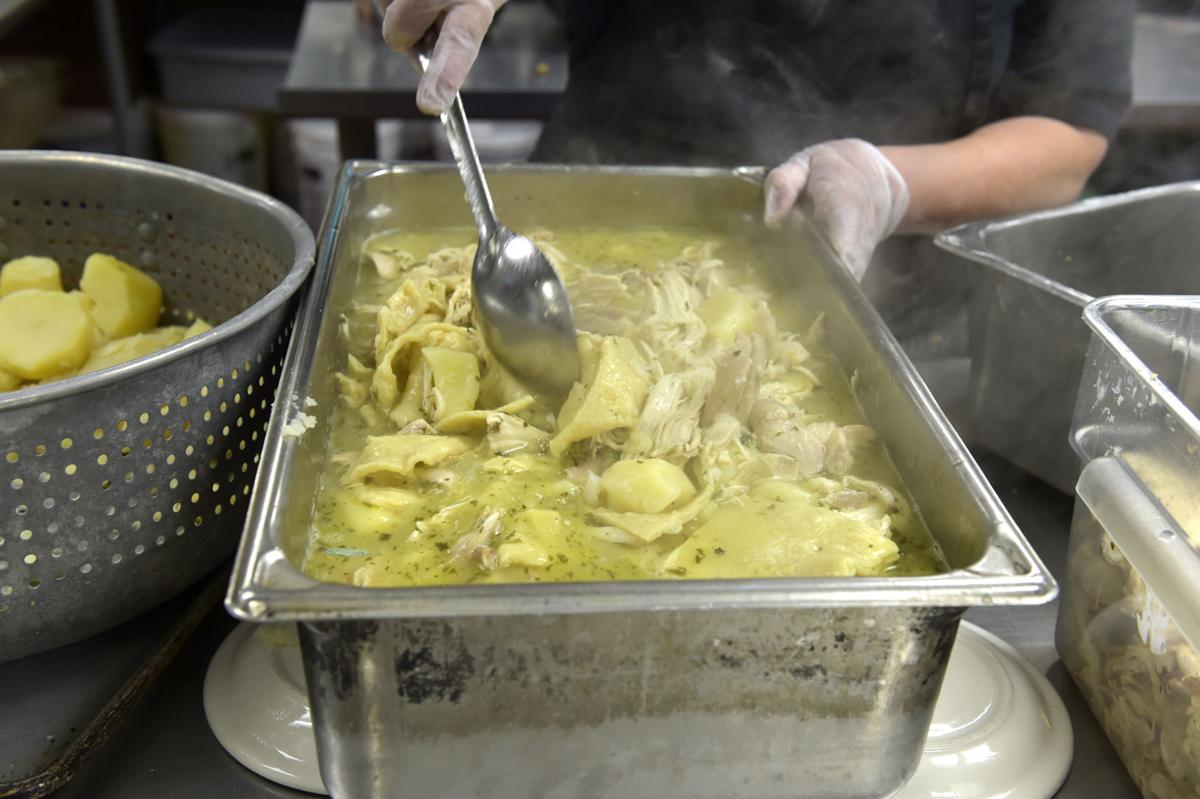 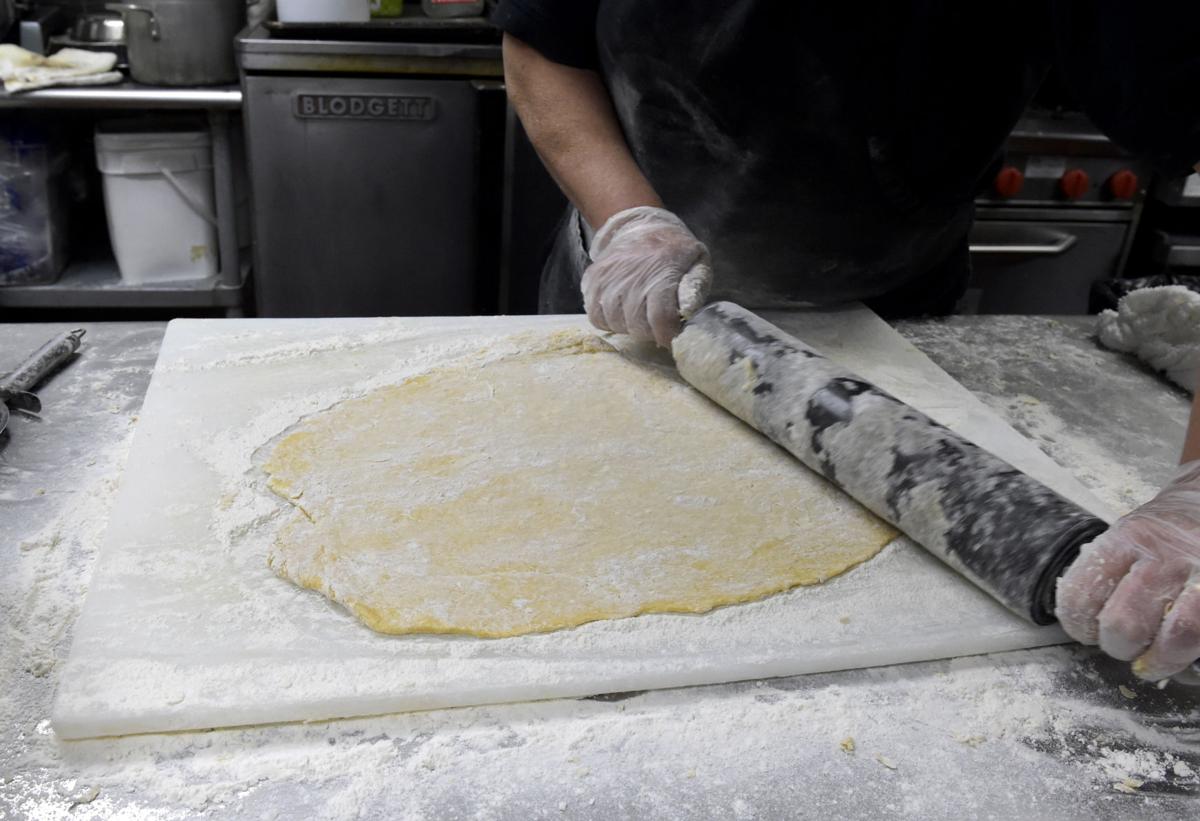 Sue Owen rolls out the dough to make noodles for chicken pot pie. 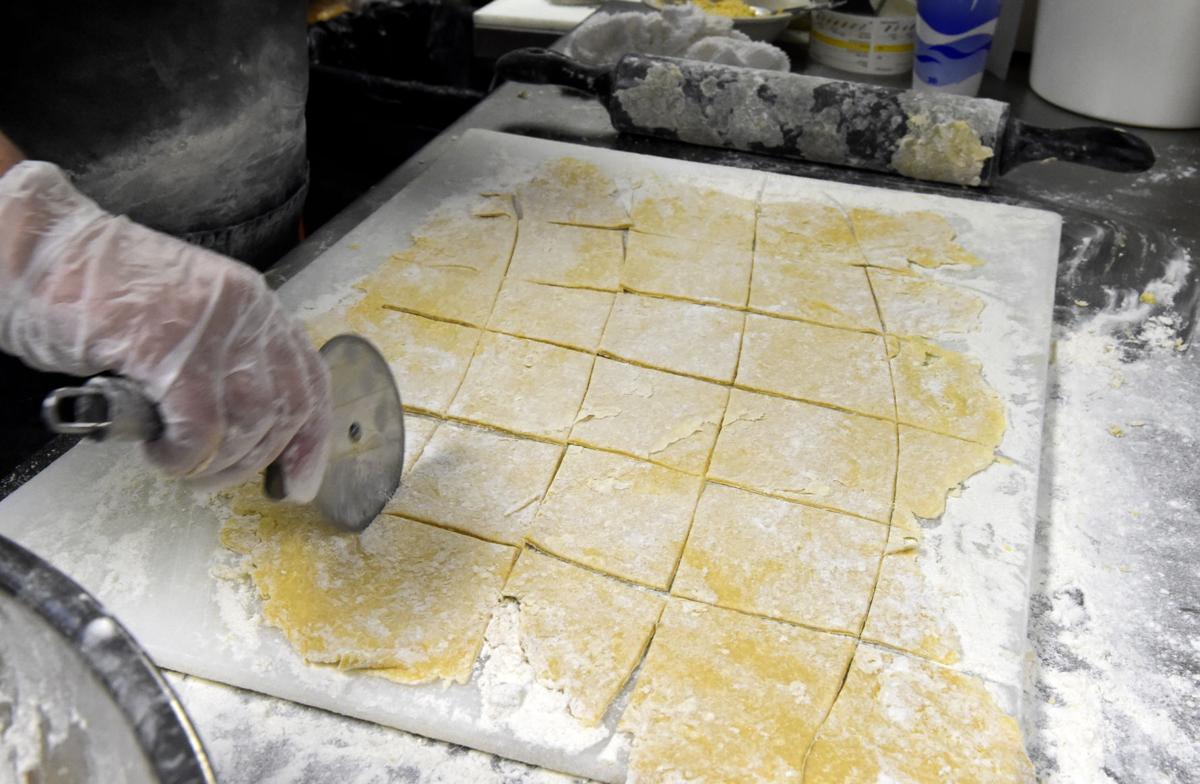 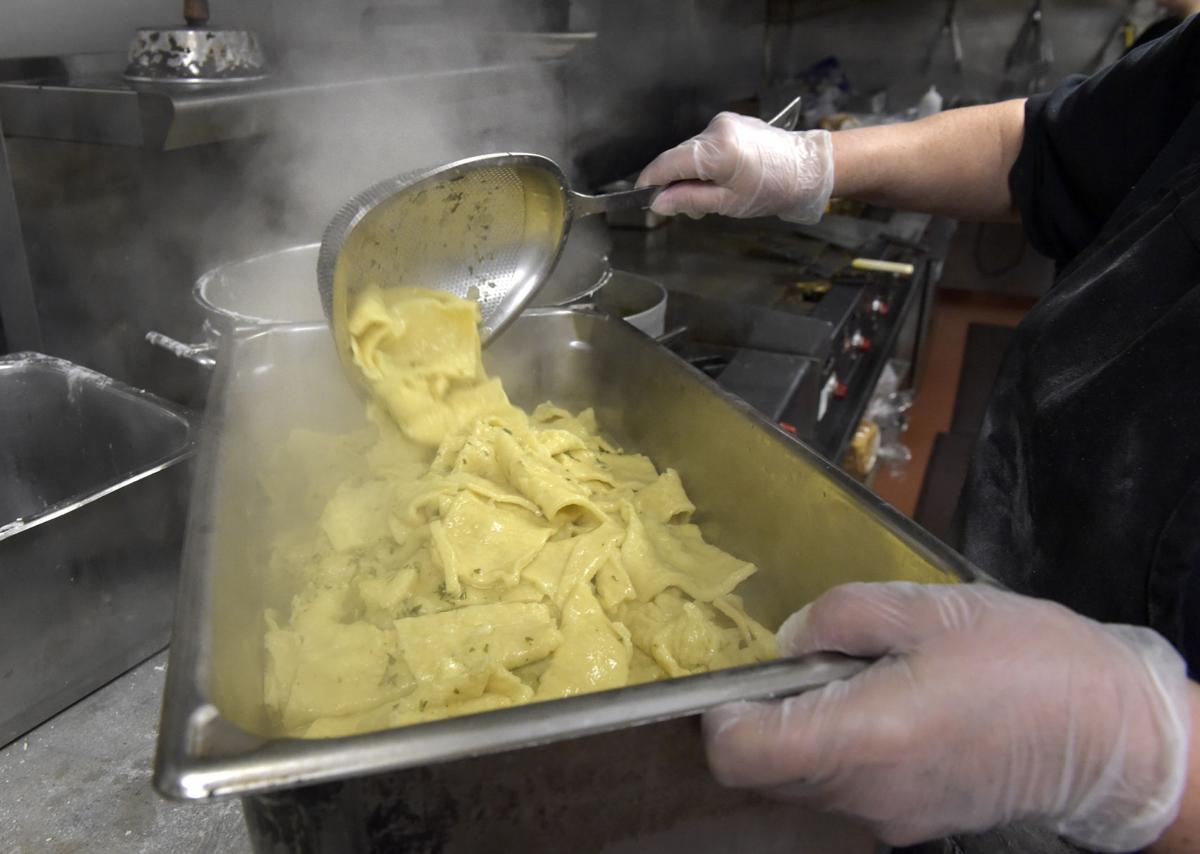 Sue Owen takes homemade noodles out of the stock to make pot pie. 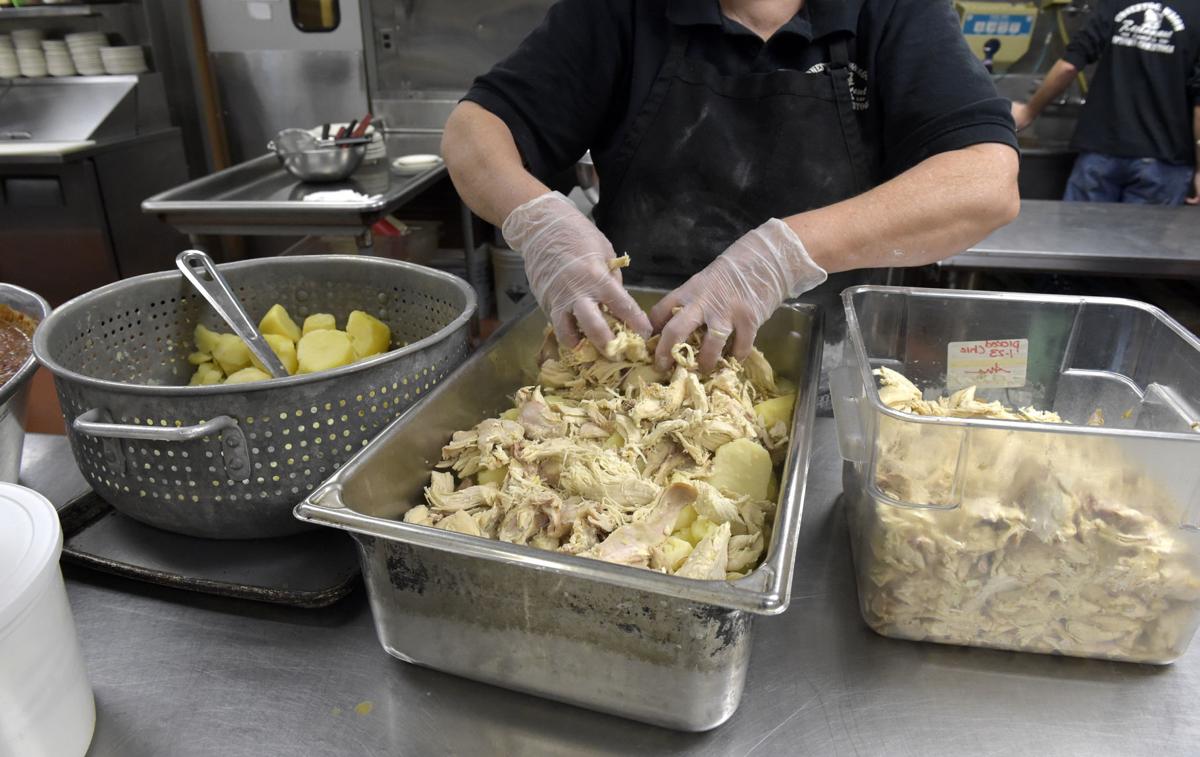 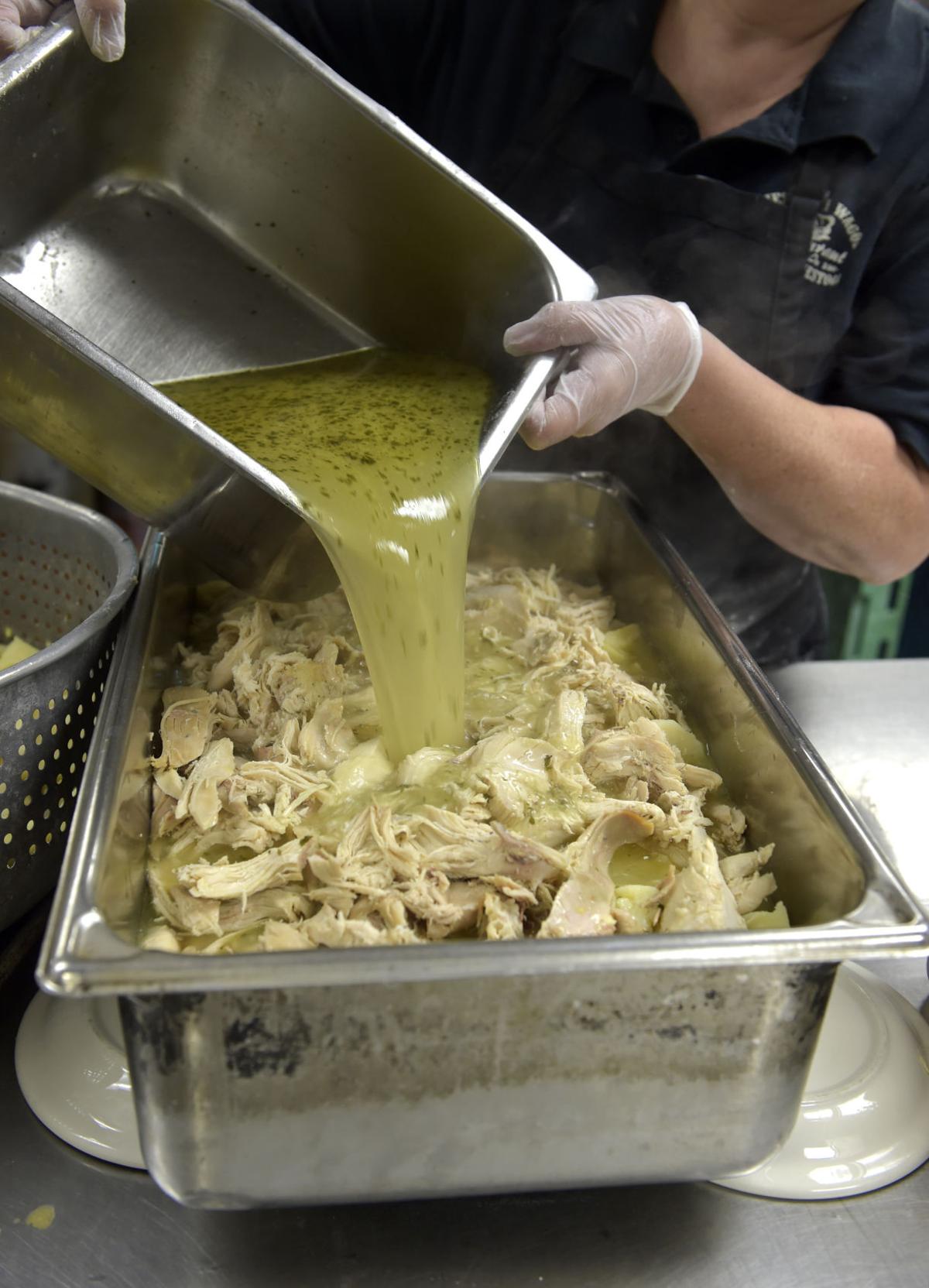 Sue Owen adds broth to the chicken to make pot pie at the Conestoga Wagon Restaurant. 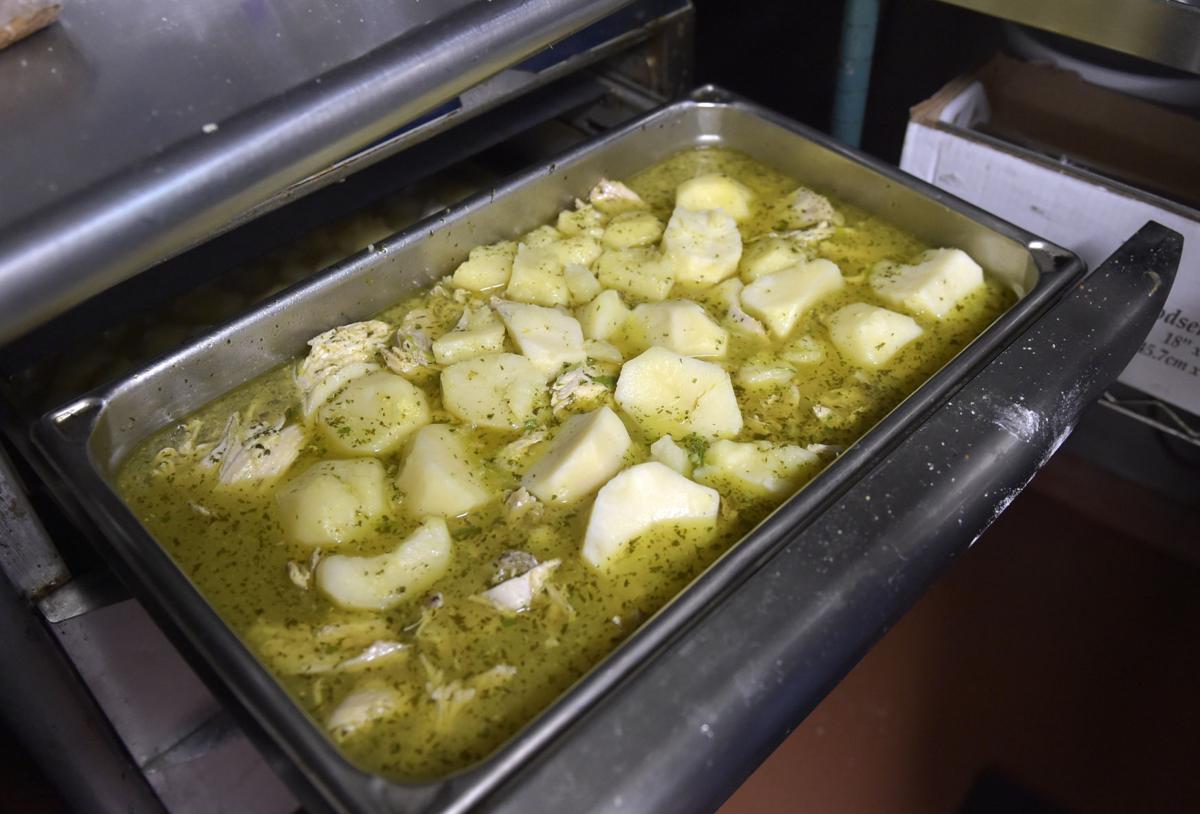 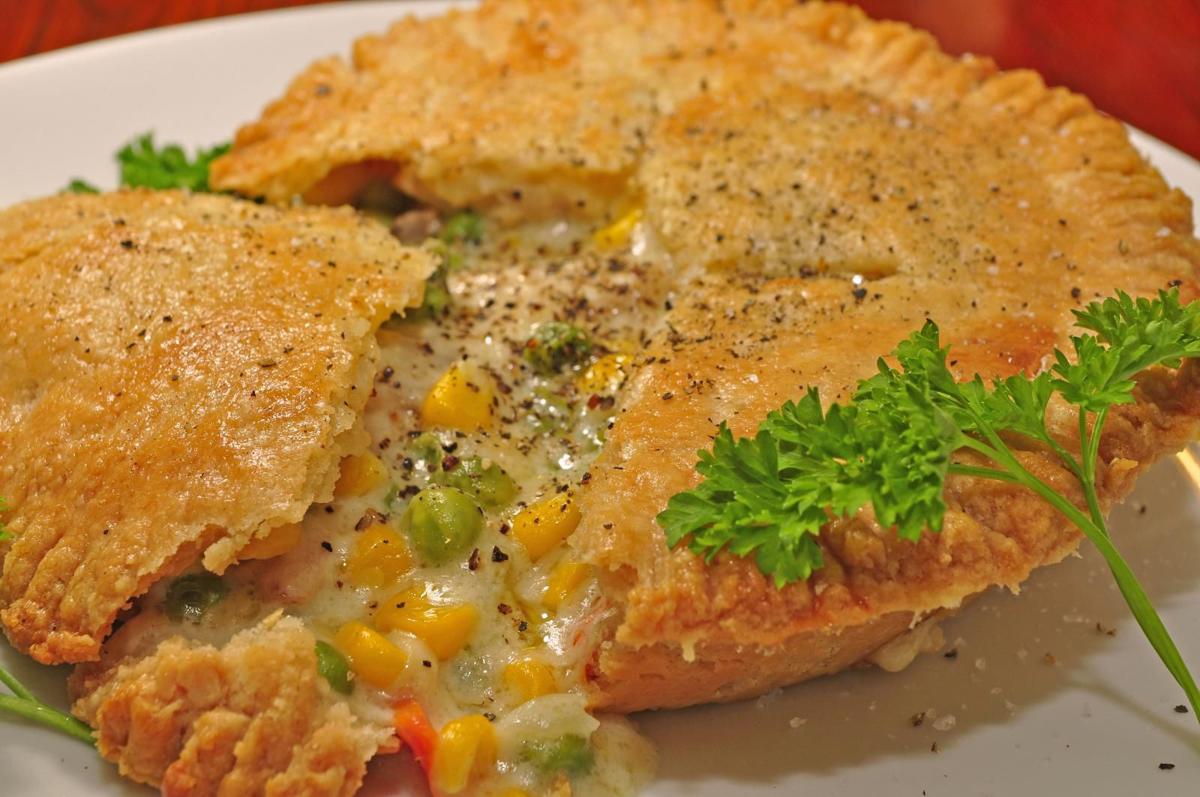 Sue Owen rolls out the dough to make noodles for chicken pot pie.

Sue Owen takes homemade noodles out of the stock to make pot pie.

Sue Owen adds broth to the chicken to make pot pie at the Conestoga Wagon Restaurant.

Just about every time Cheryl Russell visited her grandmother as a child, she and her siblings asked for their favorite food: homemade chicken pot pie — a warm, thick, carb-loaded bowl of comfort.

Years later, Russell remembers ordering pot pie in a chain restaurant. She got something completely different — a pie with a flaky crust, filled with chicken and vegetables.

“I was quite turned off by it,” the Denver woman says. “I even broke the crust trying to find the noodles.”

Where to find 6 pot pie fundraisers in Lancaster County

In Russell’s world, pot pie doesn’t have crust. It’s a thick soup made with homemade broth (usually chicken) and homemade noodles, plus carrots, onions, potatoes and celery. When temperatures drop, pot pie is one of her go-to dinners.

“We like our comfort food when it’s cold out,” Russell says.

“Give me a good, rich broth and one fine meat, and I’ll assure you a great meal,” she writes in the book, published in 1990. “Pot pie in the Pennsylvania Dutch country is not a baked pie but a slippery dough noodle dish with lots of flavor. Every kind of meat works well in this recipe.”

Hand-in-Hand Fire Company in Bird-in-Hand started its popular pot pie supper in 1994 as a fundraiser for the fire company and the Clinic for Special Children in Strasburg. Pennsylvania Dutch Convention and Visitors Bureau suggested the idea, so fire company President Tim Hoerner and a few volunteers set out to do some serious research.

They tried pot pie at restaurants and pot pie at fire company fundraisers. Hoerner, who grew up near Pittsburgh, calls himself more of a beef guy.

“By and large, one of the first things we learned was the nonprofits made very good pot pie,” he says. “Some of the rest, it was OK, and others were top-notch.”

In the early years, the fire company soon realized cooking whole chickens made the richest broth.

“The taste is a lot better, and the flavor is just more profound,” Hoerner says. “It tends to be thicker.”

These days, they take it a step further by raising their own flock of free-range chickens.

The pot pie dinner is one of the biggest fundraisers for the nonprofit. The midnight before the big day, volunteers start cooking the chickens and eventually make pot pie, 30 to 40 gallons at a time.

LancasterOnline readers shared that they make pot pie with ham, beef, sausage, squirrel or beef heart. Some remember lima bean or pea pot pie from the Great Depression. Others say vegetables do not belong in pot pie. Some insist on adding saffron.

Bob Reed loves the pot pie his fiancee Denise Warfel makes. She starts with a chicken in the pressure cooker. She rolls out homemade noodles and adds potatoes.

Warfel makes the lima bean pot pie her mother used to make but balked when Reed asked to add lima beans to the chicken pot pie. So he’ll add some to his bowl, and they’re both happy.

And that pot pie with the crust?

“They taste good, but they just have the wrong name on it,” says Reed, of Colerain Township.

Pot pie with a crust

When Julia Child made chicken pot pie with poached chicken and vegetables, she topped it with a flaky crust.

Lyz Landis of Mountville makes her pot pie with chicken, carrots, potatoes, peas and what’s available. She tops it with a crust just like her grandmother did and because, she says, it tastes better.

She moved to Lancaster County more than 30 years ago and now lives in Mountville. Through the years, she’s surprised at how often the pot pie debate comes up. If Landis knows this dish is on the menu at a friends’ house, she’ll ask: “Did you make pot soup or did you make pot pie?”

She won’t turn her nose up at “pot soup,” but she’s not as excited by it, she says.

Twenty percent of people who voted in a LancasterOnline poll agreed that pot pie has a crust. Three times as many said pot pie doesn't have crust.

If you don’t make your own chicken pot pie or eat it at your grandmother’s, many restaurants throughout Lancaster County serve pot pie.

In a poll, LancasterOnline readers said they liked the pot pie at restaurants like Route 30 Diner, Bird-in-Hand Family Restaurant and Smorgasbord and the Conestoga Wagon Restaurant.

Conestoga Wagon cook Sue Owen uses her grandmother’s pot pie recipe to make the restaurant’s Wednesday all-you-can-eat special. She cooks 18 to 20 chickens the day before to make her own stock. Early Wednesday morning, the kitchen crew and sometimes owners Nancy and Bill Rankin pick the chicken off the bones. Owen rolls out the dough, cuts square noodles and then mixes them together with the chicken, potatoes and broth.

The dish stays on the menu because it’s a tradition, Nancy Rankin says.

“There’s a lot of people who come for the pot pie,” she says.

And for people who want their pot pie with a crust, the restaurant makes chicken pie some Fridays.

Bring all the ingredients to a boil in a large stock pot.

Mix the salt, pepper and flour together Cut the butter into the flour. (I use my hands and just work it into the flour.) Beat the eggs slightly and mix into the dough with a fork.

Add in the water to make a thick dough that can be rolled. If it’s too dry, add more water. If it’s too wet, add more flour. This dough is very forgiving and fool- proof.

Spread a generous amount of flour on the counter and the roller. Roll the dough to desired thickness (1/4-inch is what we like.) Cut the dough into squares with a pizza cutter. Enlist the kids to help drop the noodles into the boiling pot. Stir after about 50 or so noodles are added to keep them from sticking to each other. Boil for about 25-30 minutes, depending on thickness of noodle.

Pot pie, chow-chow, shoofly pie and fasnachts: Are you hungry yet?

Mothers pass a lot of things along to their children: the shape of a face, life wisdom, precious family heirlooms.