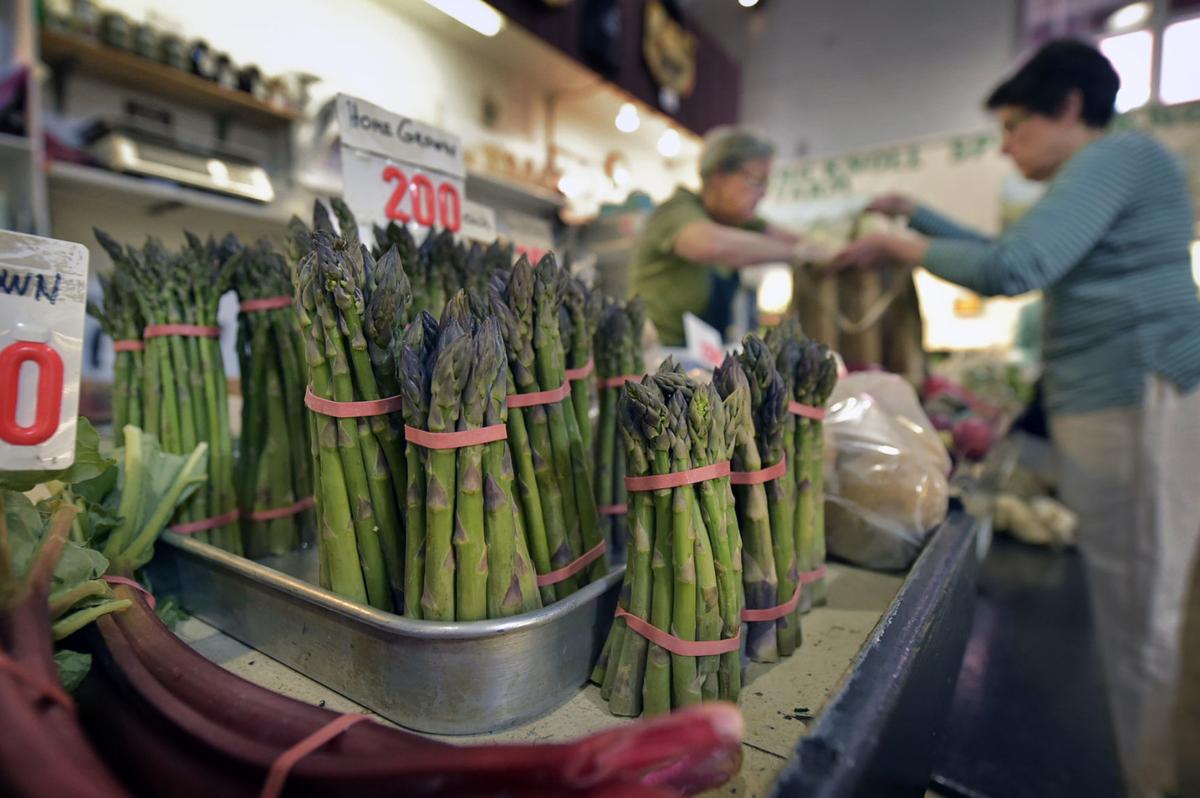 Ruth Thomas waits on customers at her stand on Central Market with local asparagus in season. 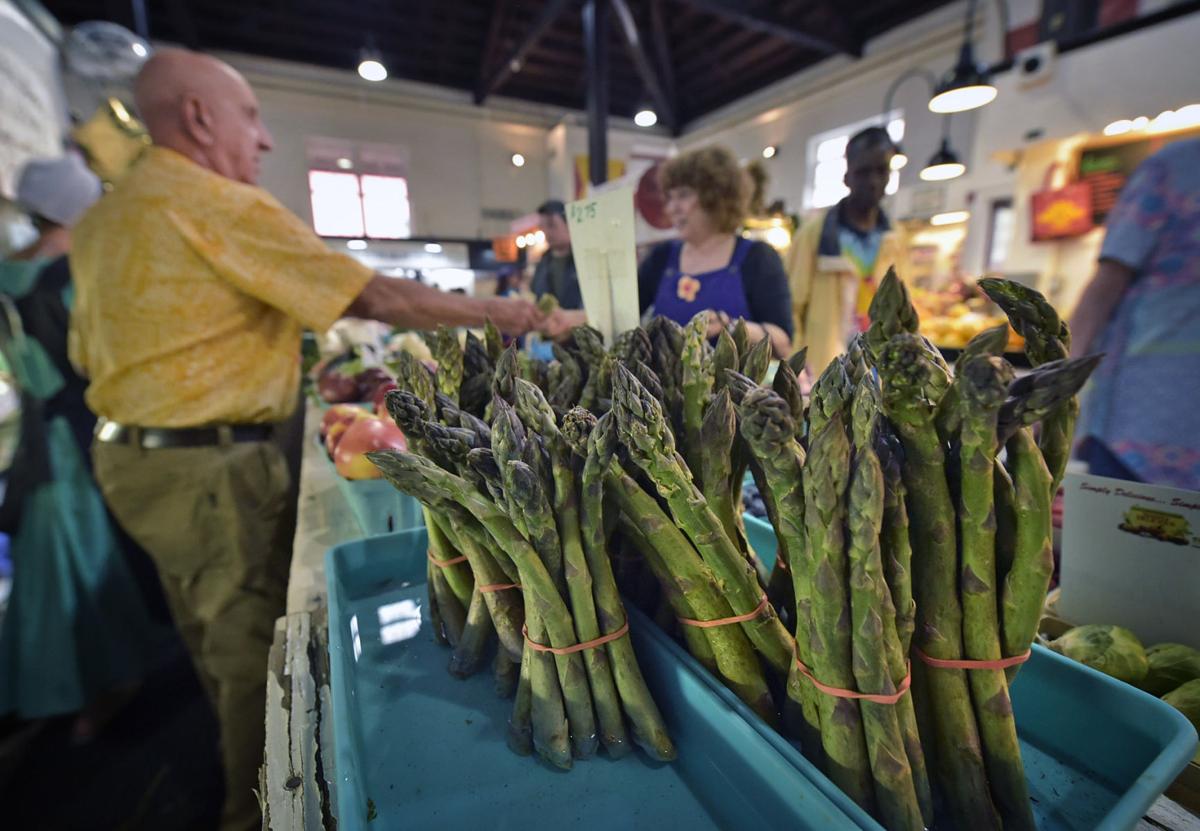 John Stoner waits on customers at his stand on Central Market with local asparagus in season. 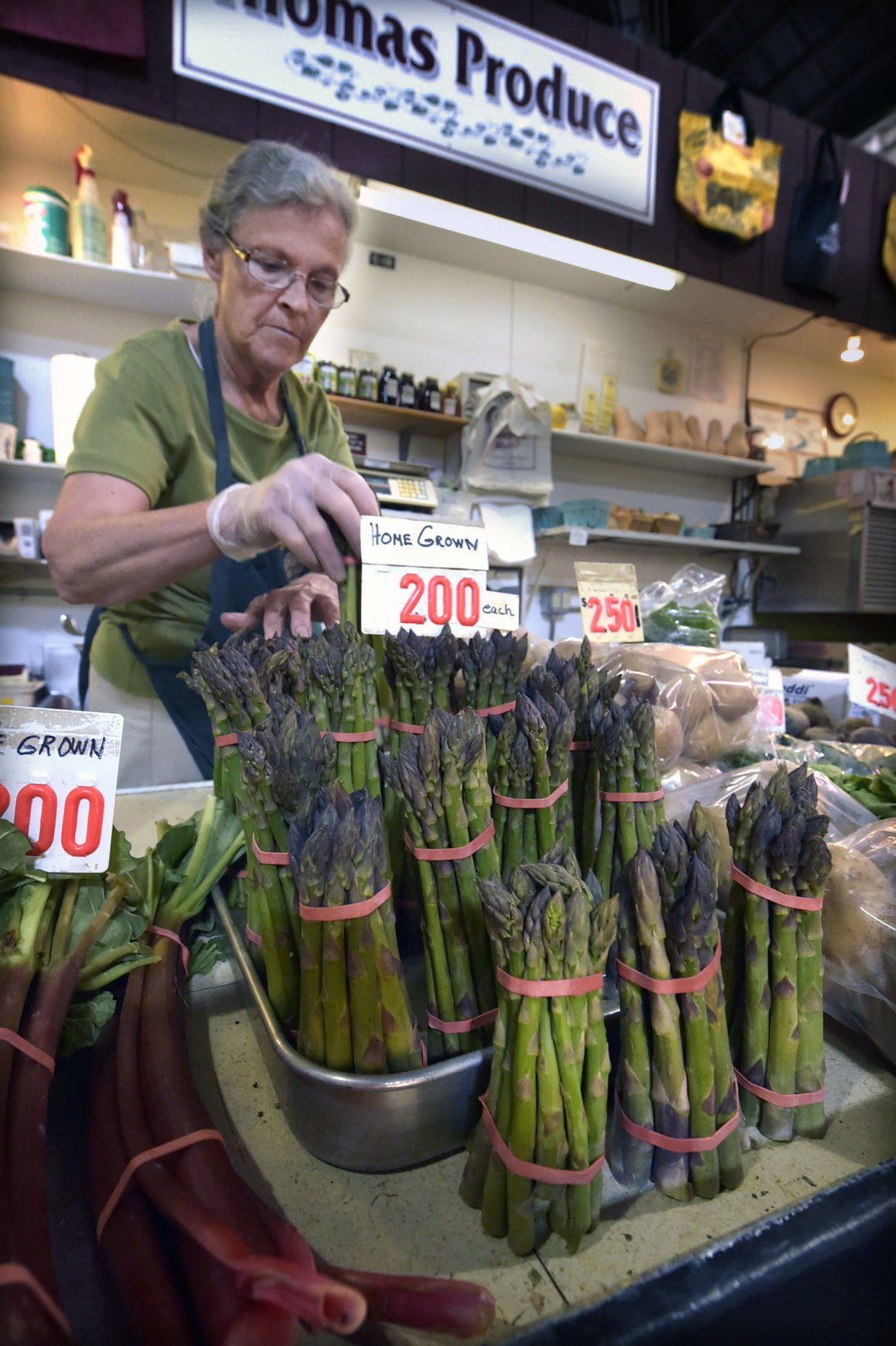 Ruth Thomas is shown at her stand on Central Market with local asparagus in season. 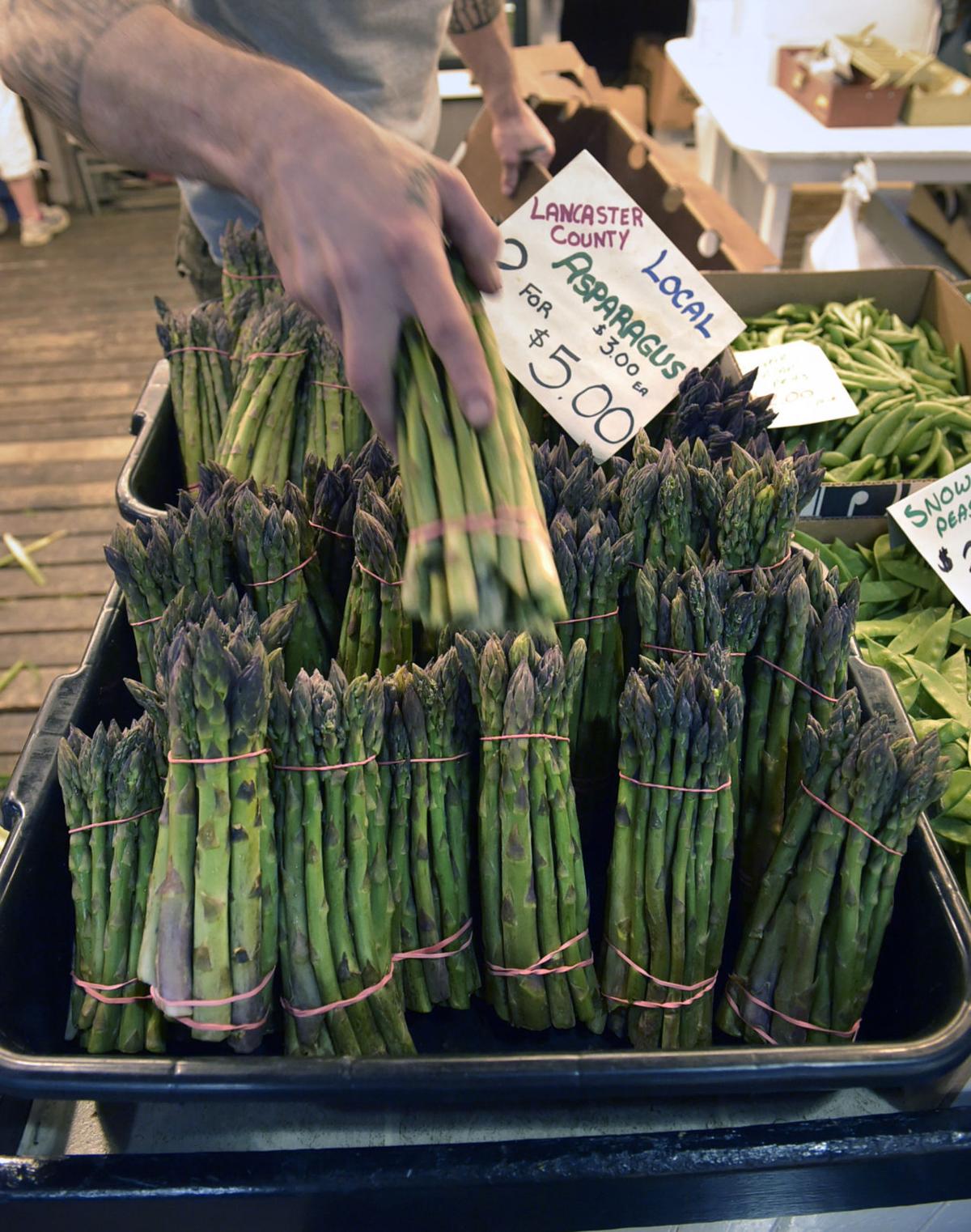 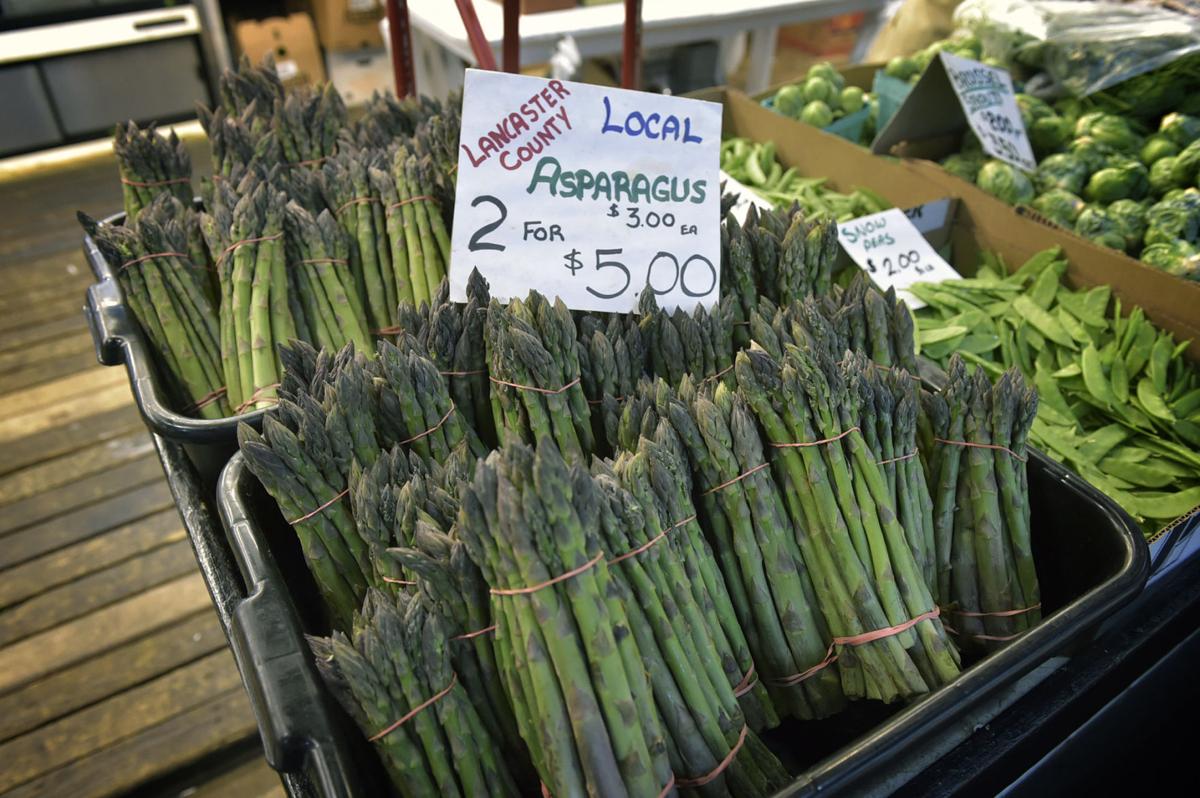 Ruth Thomas waits on customers at her stand on Central Market with local asparagus in season.

John Stoner waits on customers at his stand on Central Market with local asparagus in season.

Ruth Thomas is shown at her stand on Central Market with local asparagus in season.

For the past few weeks, lovely green bouquets have been popping up at area farmer’s markets and farm stands.

They’re a sure sign of spring, but they aren’t flowers.

They’re bunches of asparagus, cut fresh and waiting to be grilled, steamed, roasted and blanched to create an entree, side dish, appetizer or salad — any time of the day.

Every vegetable stand at Lancaster’s Central Market Tuesday had fresh, local asparagus for sale — costing anywhere from $2 to $4 for a group of spears, depending on the size of the bunch.

Some of the stands have had asparagus for sale since Good Friday.

Barr says he eats asparagus every day — usually grilling it.

“When we put out our first vegetable of the spring, it’s game on,” says Bruce Markey, manager of Meck’s Produce stand. “On the first day, we sold seven cases (of asparagus) in 15 minutes.”

“People are waiting for it” when it goes on sale each year, says Ruth Thomas of the Thomas Produce stand.

Thomas says she likes to microwave her asparagus for about three minutes in a covered dish, with a little sea salt and a dollop of butter.

He likes his asparagus cooked but still crispy, with a little cheese.

How to cook it

There are plenty of other ways to prepare this versatile vegetable.

Buying a bunch of asparagus from Green Circle Organics at Central Market on Tuesday, Marley Haus of Lancaster says she likes to roast her asparagus in the toaster oven, with a little extra-virgin olive oil, salt and pepper.

“I also like it with brown butter over white toast,” she says. “That’s a Pennsylvania Dutch classic.”

Asparagus “tends to be subtle and sweet in flavor,” Harris says.

“We’re getting into grilling season,” Harris says, “so it’s always great to give (asparagus) a light marinade” and grill it so it stays crisp. For the marinade, he suggests combining olive or vegetable oil, fresh herbs and some kind of acid — lemon or lime juice or a little bit of white wine.

But go easy on the herbs.

“We’ve always been taught in the past to mask this flavor,” Harris says,

“and season it heavily and throw a lot of herbs in there. I think we need to go backwards because they’re such delicate flavors and we just haven’t allowed our palates to experience that because we’ve been heavy seasoners.

“I like a little light finishing salt,” he says, such as a variety of wet gray salt he got from a Danish chef, along with pepper, possibly a touch of cayenne and small amounts of olive oil and lime or lemon juice.

“Grilling is always the go-to” for asparagus, Harris says, “though we don’t want to char it.”

Harris adds that you don’t need to heavily salt the asparagus too early in the cooking process. That can draw moisture out of the vegetable before it cooks.

If you’re incorporating asparagus into other hot or cold dishes, Harris says, he recommends blanching the vegetable first.

“You drop it in salted, boiling water for maybe 45 seconds to a minute,” Harris says, “and pulling it right out into ice water to shock it and stop that cooking. The green (in the asparagus) will just pop.”

You can then saute blanched asparagus or cut it up and use it in a risotto, Harris says.

“The whole spears could also go into the oven with other vegetables that are coming out now, like the early radishes.” he says. The peppery spiciness of a radish — cut in half and roasted along with the sweet asparagus — “is a nice twist on natural flavors.”

You can also use blanched asparagus in cold dishes such as salads, Harris says.

Asparagus doesn’t have to be a dinner dish, says Harris.

“It goes well with eggs,” Harris says. For example, you can top a deviled egg with asparagus, he adds.

“It can be used for breakfast, to make a poached egg with fresh asparagus on an English muffin with a Hollandaise. The asparagus brings a different texture.”

“It all comes down to the size in determining flavor,” Harris says. “Usually the larger of the stalks tend to have more sweetness and more moisture than our pencil points — our really thin asparagus,” Harris says, “though the tips of the pencil points are very tender.”

When the stalks get too thick, he says, “they tend to get fibrous and woody at the base,” he says. So, he advises choosing asparagus spears with a medium thickness.

You probably don’t have to peel asparagus, Harris says, except for the thickest parts at the base of large stalks. “That will take some of the fibrousness out.”

Harris recalls that he had a French instructor during culinary school who “went ballistic” whenever someone cut a stalk of asparagus from the garden using a knife.

“They’d never cut asparagus,” Harris says. “They’d take it and snap it off. His belief was that where you snap it is where the fibrous end meets the tender (part).”

Further, Harris says, that chef believed in a plate presentation that didn’t have each spear of asparagus cut the same way.

“It wasn’t meant to be perfect,” Harris says. “It’s nature.”

Now is a good time to plant asparagus roots, says Timothy Elkner, an educator with the Penn State Extension office in Lancaster.

But don’t expect a great yield from those plants for a few years.

“The first thing folks need to realize is that asparagus isn’t like zucchini,” Elkner says. “But you put asparagus in the ground and a well-maintained patch will be there for 15 years.

“Folks need to think about where they’re going to put asparagus, because it’s not something you put in and decide you want to put it somewhere else, on the other side of the garden, next year,” Elkner says. “You don't move it once it’s established.

“It’s not like zucchini, where you plant two zucchini plants and you supply the neighborhood,” he says. “There are a limited number of spears per plant, so to generate enough asparagus to make it worthwhile you need” enough room for it to grow.

“The possible yield from 50 feet of (garden) row is 25 bunches” of asparagus, he says.

“They have larger spears, and they tend to be predominantly male plants,” he says. Female plants drop seeds that cause extra asparagus stalks to come up in competition with the ones you’ve planted.

“The first year you plant it you don’t do anything,” Elkner says. “If it does well, then maybe you can pluck a stalk or two the next year.”

He says most people wait until the spring to cut back the asparagus ferns or leaves that grow during the year to protect the crown of spears.

“The third year you may be able to pick it for three or four weeks,” he says. “And then the fourth year, you're into full production which can be six weeks, maybe eight weeks of cutting spears, depending on the season.”

Using a fungicide to spray for diseases that affect those leaves is sometimes necessary, he adds.

“You pick it right before dinner, and it doesn't get much better than that if you’re an asparagus person.” he adds.

Asparagus may be versatile and delicious, but, for most people, it has one drawback: that sulfurous smell that comes out in their urine.

Physiologist M. James Cosentino, a biology professor at Millersville University, was preparing to talk to his physiology class about substances that are filtered out by the kidneys when he learned some interesting facts about asparagus.

“It turns out that almost everybody except for about 20 percent of the population has that smell that comes out in your urine (from asparagus),” he says. “It's a compound — an amino acid derivative — that’s unique to the asparagus plant, as far as we know.”

“It’s volatile. So when you urinate, it leaves the urine and goes out into the air and then you can smell it,” Cosentino says.

In people who make up that other 20 percent of the population, he says, their kidneys are not filtering out the chemical. It’s not present in their urine, he adds, so it doesn't smell.

“What I found particularly interesting is that there’s a fairly high percentage of people that cannot smell that, even if it’s there,” Cosentino says. “And so, you’re probably producing it but you’d need somebody else to smell your urine to see if you are actually doing it. ... There are a lot of people who don’t have the gene to smell this stuff.”

Here are some recipes in which you can use that bunch of fresh, local asparagus you just brought home from the farmer’s market.

The California Asparagus Commission offers this recipe that turns these tender green spears into a crispy snack.

• Peanut or canola oil for deep-frying

Dip asparagus in batter and deep fry until golden brown, and tender, about 2 to 3 minutes. Drain on paper towels and season with salt and pepper. Serve warm with three sauces.

Here’s how to make three different dipping sauces for the fried asparagus.

In another recipe from the Asparagus Commission, the vegetable joins cheese, bread and ham to become a hearty appetizer.

• 3 garlic cloves, peeled and cut in half

Bring a large saute pan of salted water to a boil over high heat. Add the asparagus and cook until tender crisp, about 2 minutes.

Transfer the asparagus to a colander, refresh under cold running water to stop the cooking and drain well. Set aside.

In a small bowl, combine the cheese and ham; toss to mix. Set aside.

Using your fingers to hold the garlic, rub the clove against one side of the toasted bread to flavor the entire surface.

Drizzle or brush with a bit of the olive oil. Arrange the blanched asparagus on the toasts, then divide the cheese and ham topping evenly over the asparagus. Season with salt and pepper.

Place bruschetta on a baking sheet and broil just until the cheese melts and begins to brown, about 1 to 2 minutes. Keep a careful watch so as not to burn.

Finally, because we’re in the middle of National Raisin Week, here’s a light, fresh asparagus salad recipe for the spring and summer from the California Raisin Marketing Board.

• Salt and pepper to taste

Remove about 1/2-inch from bottom of asparagus spears. Blanch in boiling water for 2 to 3 minutes; cool in ice water.

Cut into 1/2-inch pieces and place in mixing bowl. Remove tops and very bottom of leek; cut in half lengthwise.

Grill over hot charcoal for 2 to 3 minutes per side, being careful to avoid burning.

Cut into matchstick-size pieces and add to bowl.

Set aside to chill. Serve cold.