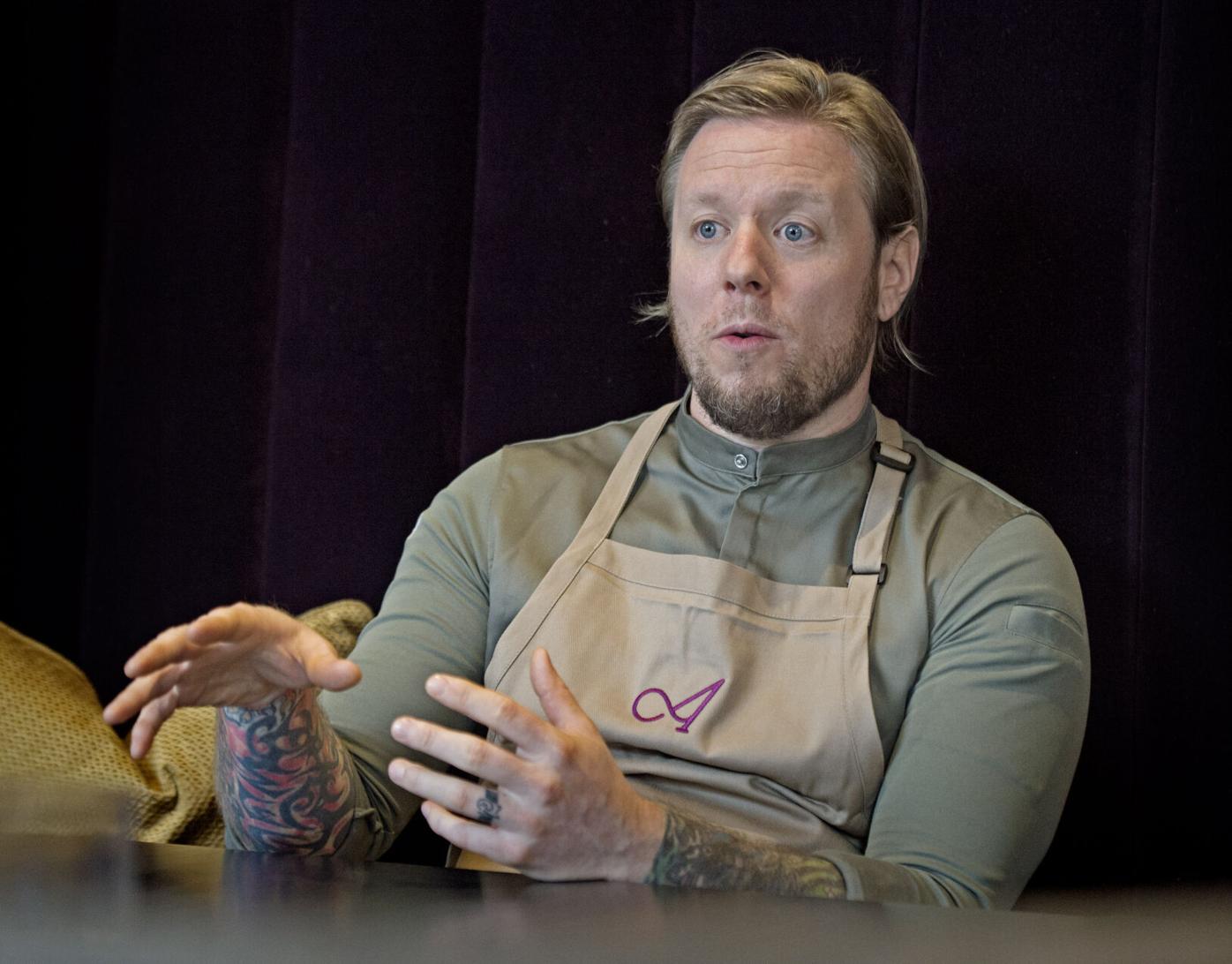 Chef Rikku O’Donnchü brings his modernist sensibilities from his world travels to Lancaster. 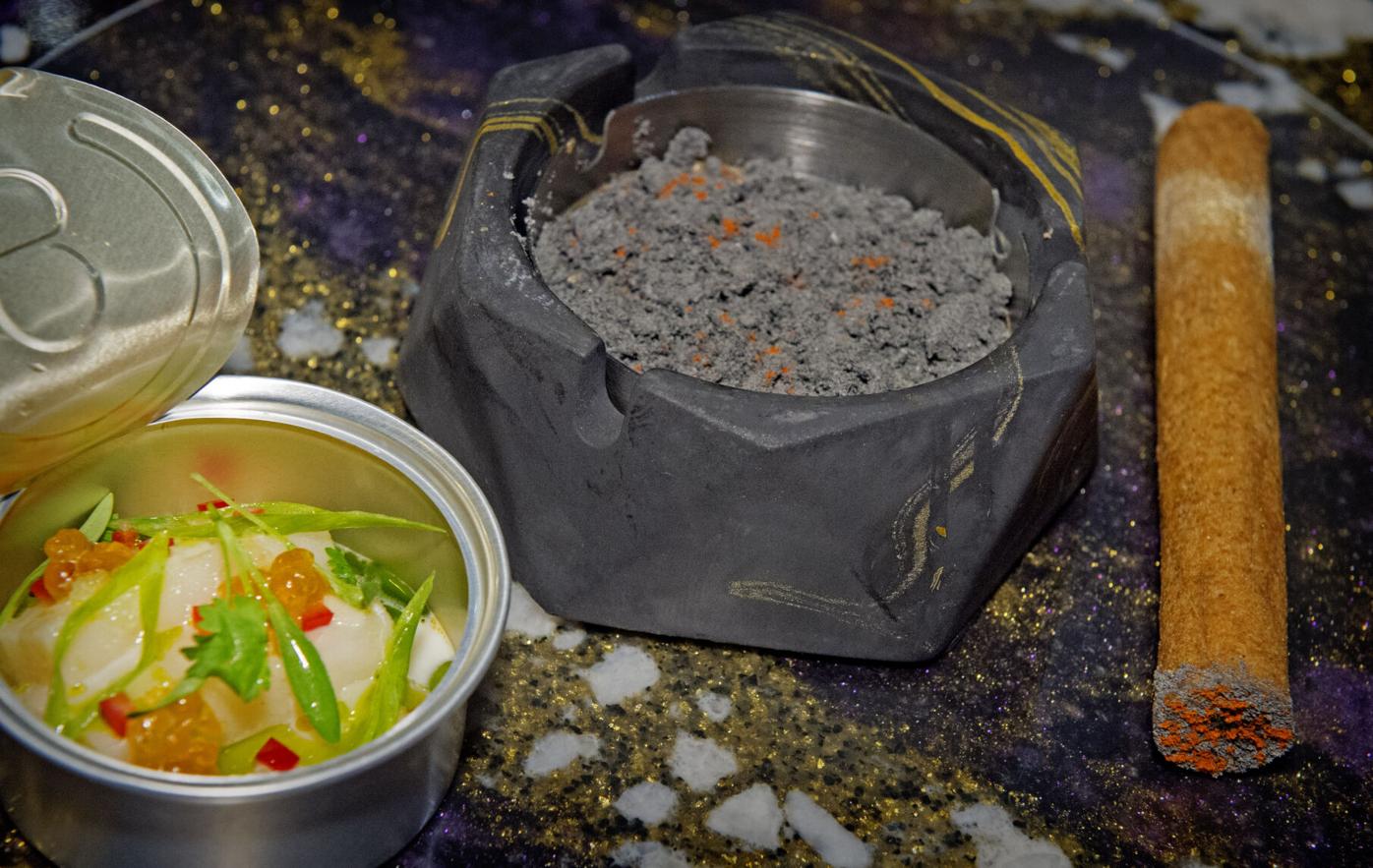 A white tuna ceviche that Amorette chef Rikku O'Donnchu has dubbed ‘canned tuna’; pictured right, ‘Not an ashtray,’ a whipped butter of black garlic infused with a smoker and served with a bread cigar. 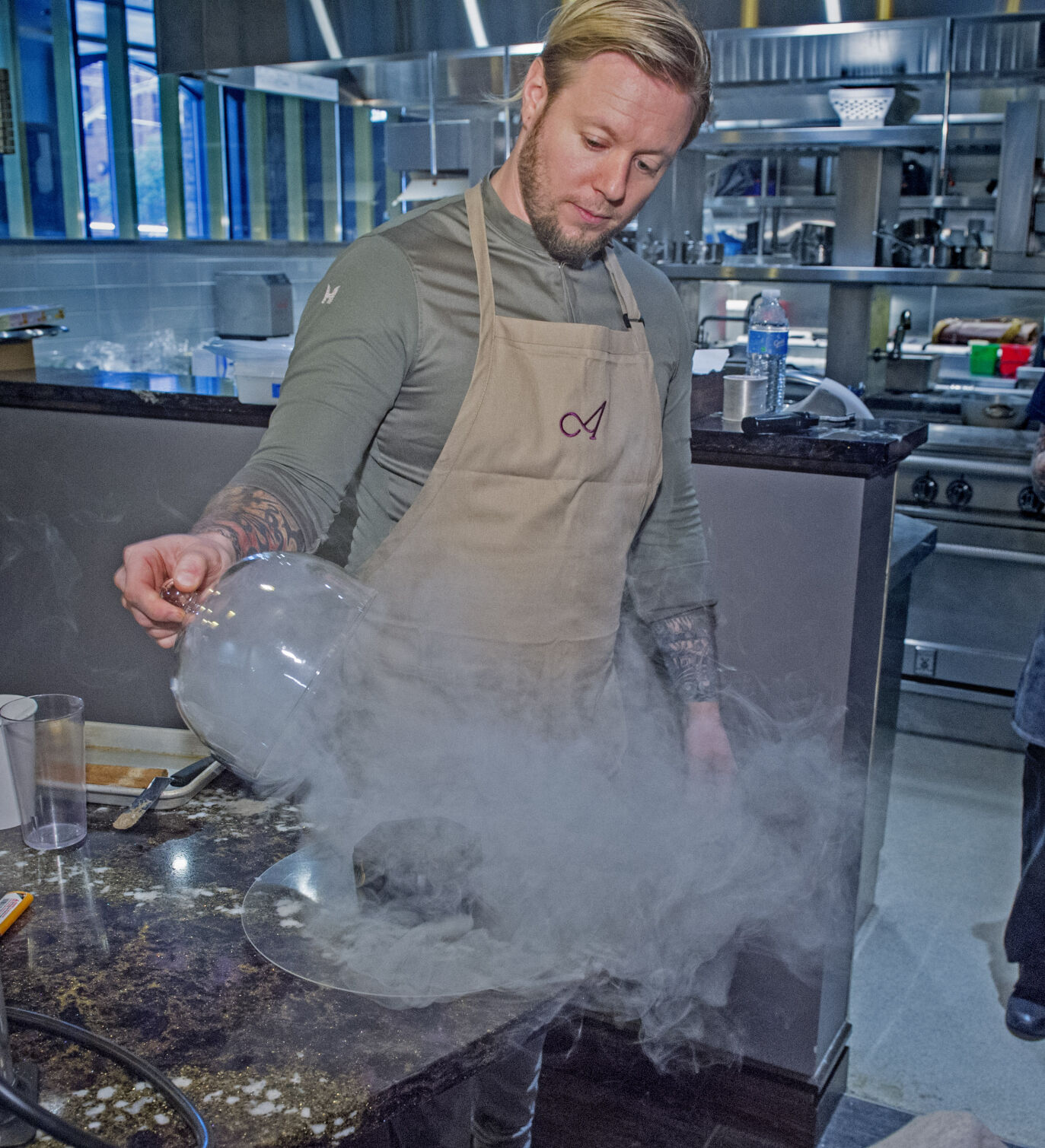 Rikku O'Donnchu, the new chef at Amorette, lifts the smoke filled dome from a dish called "not an ashtray" in the restaurant's kitchen Friday, July 16, 2021. 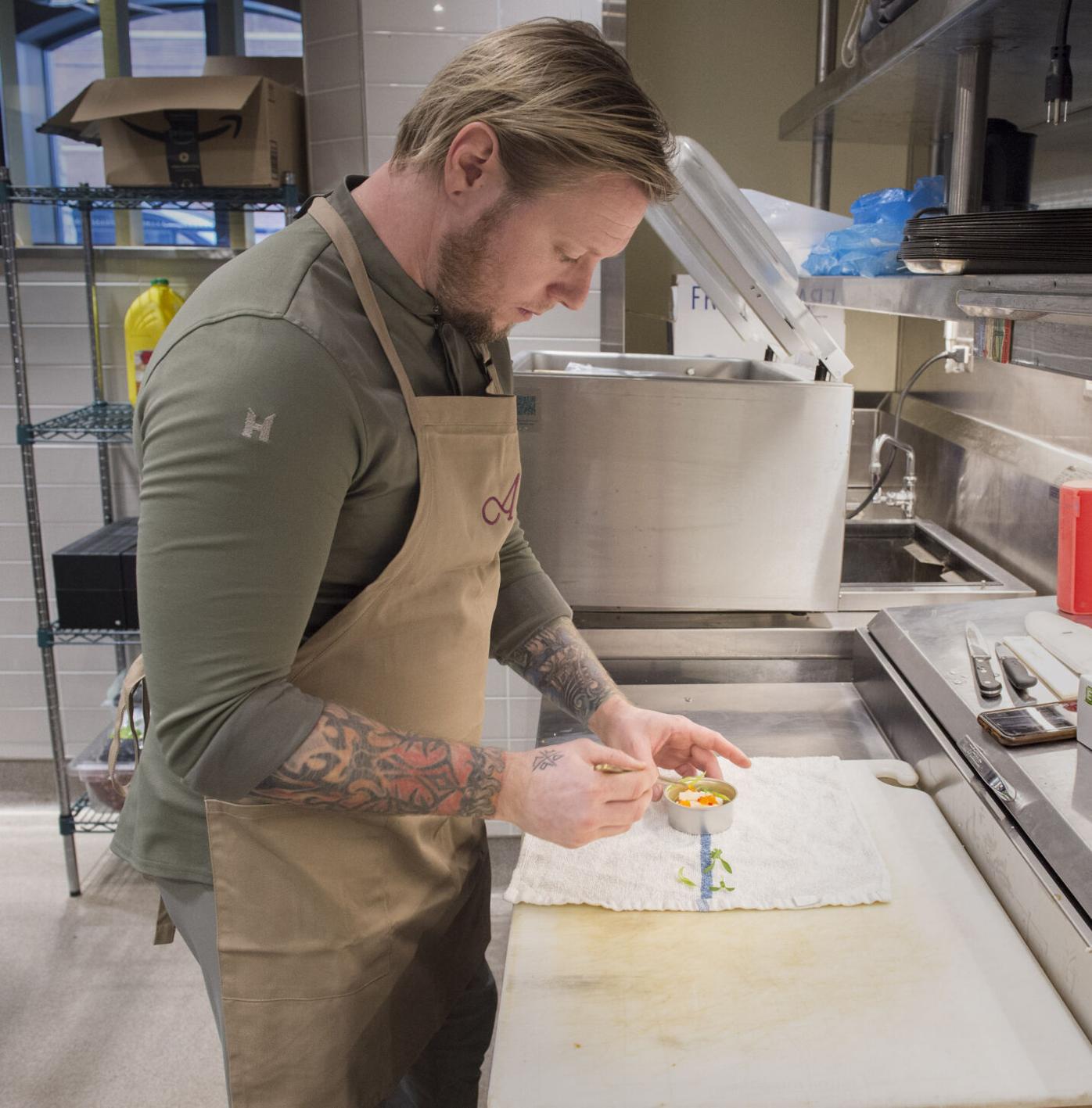 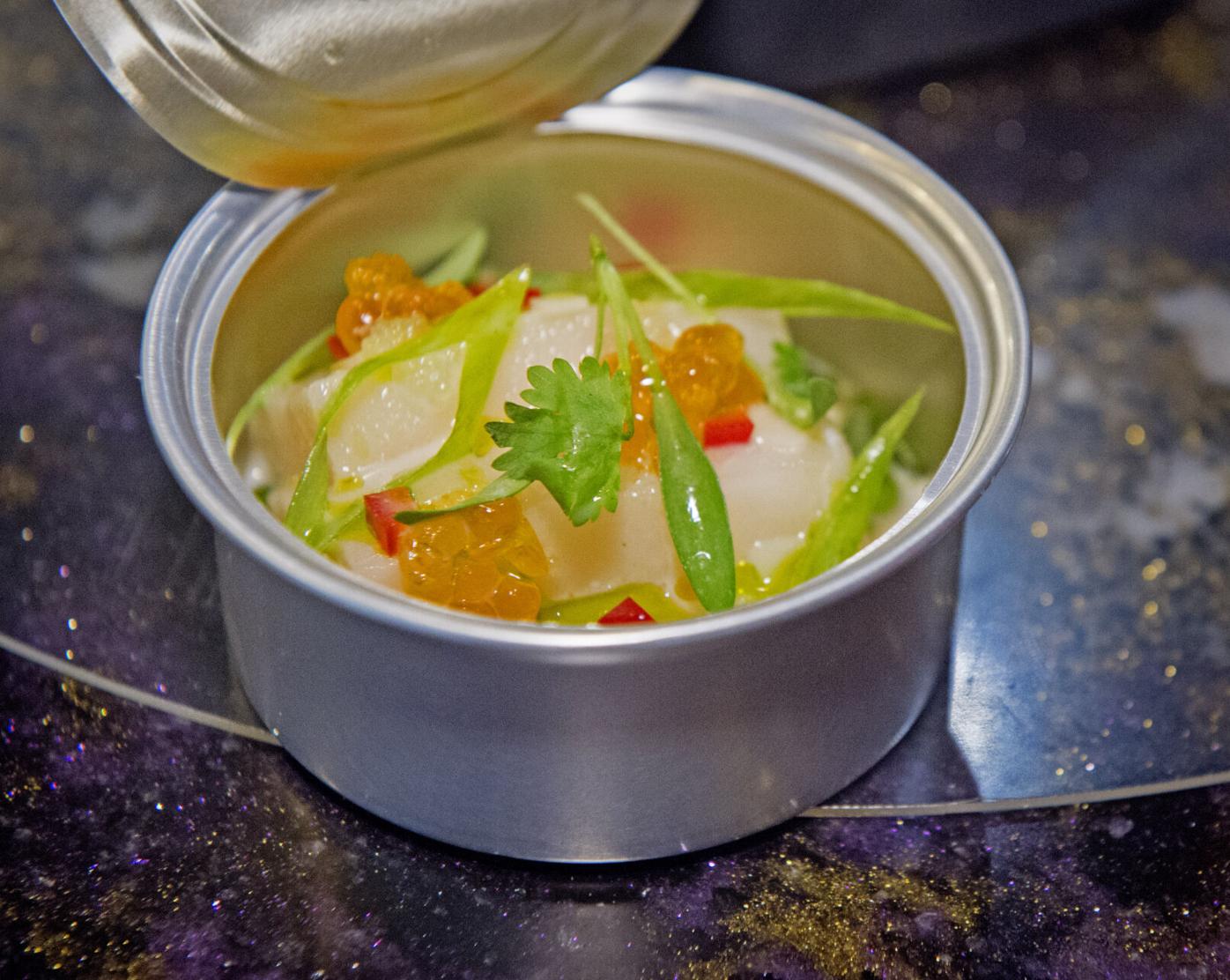 This "canned tuna" was prepared by Rikku O'Donnchu, the new chef at Amorette, Friday, July 16, 2021. 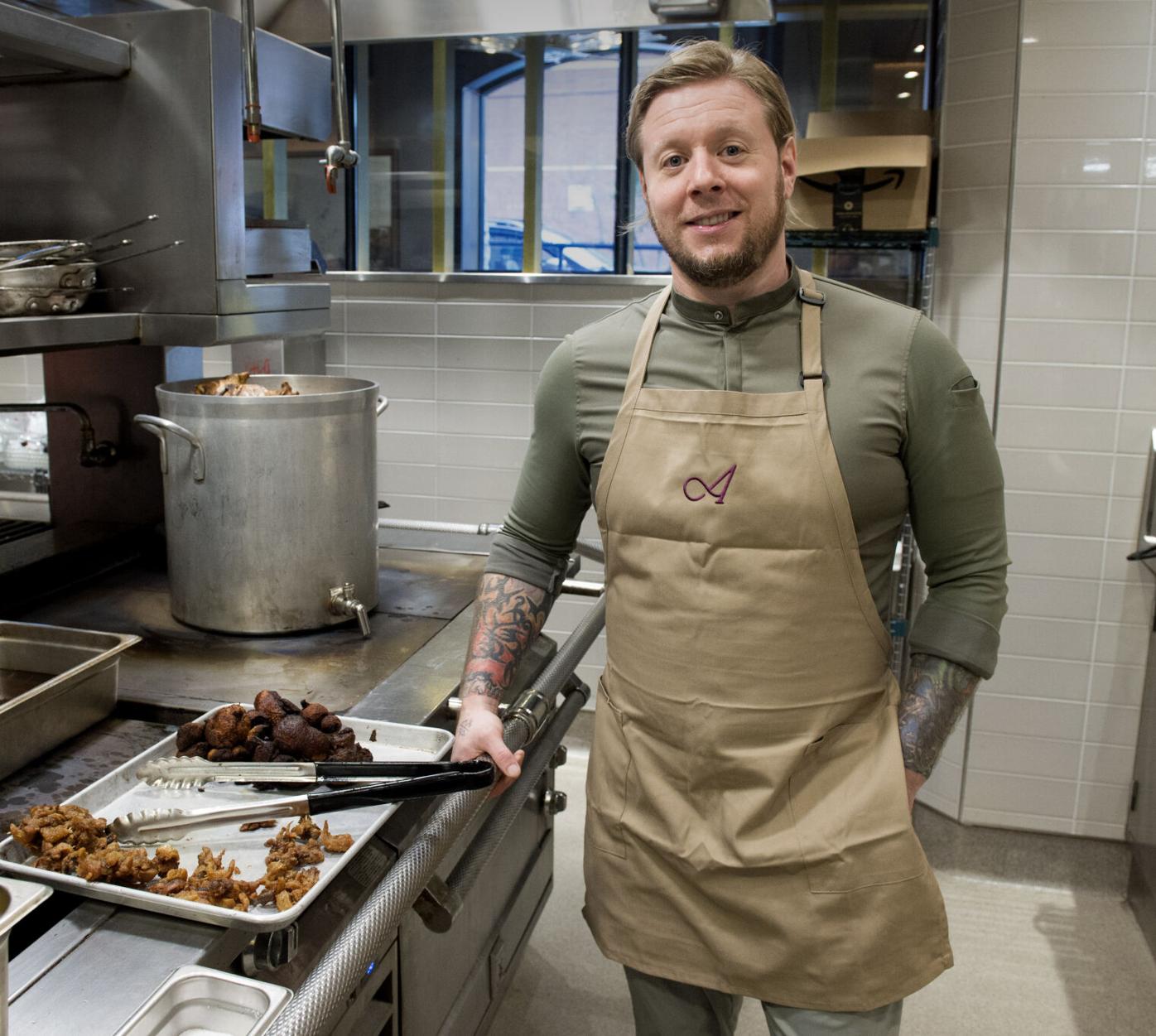 Chef Rikku O’Donnchü brings his modernist sensibilities from his world travels to Lancaster.

Rikku O'Donnchu, the new chef at Amorette, lifts the smoke filled dome from a dish called "not an ashtray" in the restaurant's kitchen Friday, July 16, 2021.

This "canned tuna" was prepared by Rikku O'Donnchu, the new chef at Amorette, Friday, July 16, 2021.

Like most restaurants in Lancaster, Amorette went dark in March 2020 in the early days of the COVID-19 pandemic. But unlike most restaurants in Lancaster, Amorette stayed dark without an end in sight. To be specific, it’s been one year, four months and seven days since the restaurant’s last supper. As of Friday, the dormant days are officially over when the high-end, special occasion dining room reopens for dinner, with a mostly new staff, reinvented menu and a new chef to lead the way.

Enter Rikku Ó’Donnchü (in Gaelic, it sounds like O’Donohue), an ambitious culinary wunderkind who comes to Lancaster from Montana by way of South Africa (and six other countries). At just 37, Ó’Donnchü has worked with Michelin-starred chefs such as Heston Blumenthal (of The Fat Duck in Britain) and Thomas Keller (of the French Laundry in Napa, California) and most recently owned a restaurant in Cape Town, South Africa, which permanently closed due to the pandemic.

Ó’Donnchü landed in Lancaster in early June with his wife and baby boy and hit the ground running at Amorette, which local entrepreneur Tom Ponessa and wife Donna Ponessa opened in May 2018. In its first 22 months, the restaurant earned two industry awards: a four-diamond distinction from AAA and a “two-glass” best of award of excellence from Wine Spectator magazine.

Last week, we caught up with Ó’Donnchü at the restaurant, where the staff was busy preparing for a series of rehearsal dinners known in the business as “soft openings.” He offered to whip up two courses that will appear on the new menu and that reflect his modernist cuisine sensibilities. First up: his version of a bread course dubbed “Not an Ashtray,” a crock of whipped black garlic butter made to look like ash. The butter is brought to the table under a smoked-filled dome; a cigar-shaped onion bread is meant for dipping. His “canned tuna” course is a ceviche of white tuna, served in a can, drizzled with a lime coconut marinade and cilantro oil.

Ó’Donnchü acknowledges that his playful takes on food may not be universally appreciated, and may even make some diners uncomfortable. But, one thing’s for sure, he said, and that’s artistic authenticity.

“The key is uncompromisingly us,” he says.

Our conversation, which has been edited and condensed for both clarification and space, follows.

Lancaster wants to know: Why are you here? And what do you want folks to know about you?

Amorette is probably one of the most expensive put-together small restaurants in the country, let alone in Lancaster County. From the artwork to the carpets, to the upholstery. It already has a four-diamond status within Pennsylvania as a restaurant. Tom and Donna (Ponessa) are huge foodies; they’ve eaten at all these restaurants where I’ve previously worked.

It’s a stone’s throw away from these major cities as far as food destinations go. The kind of people who eat at these kinds of restaurants fly halfway across the world to experience immersive dining like we’re going to put on offer here.

I think it’s a great location in a beautiful little city, in a beautiful area, in a beautiful setting. What an amazing restaurant. It’s been put together so well. It really does give us a great canvas, as it were, to do we do in the kitchen specifically, and the way that we deliver things. It has a contemporary but opulent feel, which is the message we want to put through with the food as well.

Let’s talk about the food. Would you describe it as molecular gastronomy?

I would say it has elements of it. But I wouldn’t really describe it as molecular gastronomy. That would be more of an El Bulli (the erstwhile famous food destination in Costa Brava, Spain) or Tickets (an Albert Adria restaurant in Barcelona) style of restaurant, as it were, where it’s all molecular and there’s lots of science being used tableside. We have a little element of that.

I think if you were going to put a direct comparison, I think an amalgamation of Noma (in Copenhagen, from chef Rene Redzepi) The Fat Duck and a little bit of Alinea (in Chicago, from chef Grant Achatz) would be the closest sort of reference to what we’re doing. The best way to describe what we’re doing is modernist cuisine, if it was gonna be anything. It isn’t just taking one set of tools and using it to do the job that it was intended to be. It’s more of a mixed bag of tools with a mixed bag of trades.

There’s a little bit of chemistry thrown in there, there’s a lot of art references in the food — I have a collection of Salvador Dali works, and stuff like that. I’m really into surrealism. Even music gets used a lot of the time for inspiration, like Jethro Tull which can take you on a little trip without using anything to get you there other than the music. We’re trying to give a whimsical experience more than a molecular experience.

Talk about the format of the menu as you envisioned it.

We’ve tailored a (fixed-price) menu of six courses and 11 courses. And there’s a small a la carte menu for the bar. The restaurant menus are set up in a way in which each course is delivered in a theatrical and whimsical setting. And there’s always a hidden element to the food. There’s always something to discover. It’s kind of like you’re on a journey as opposed to a meal. There’s particular textures and sensations within the capacity of the mouth, nose, ears and eyes, which will all be stimulated at the same time.

Will it be changing seasonally?

I think so, yeah. We’re big on using the word “seasonal” to allow us to have as much play on the menu as humanly possible. But I want to see the menu change at least five to six times a year, because seasons aren’t one, two, three, four. It also keeps the creative juices flowing in the kitchen.

There will be elements of the menu that keep the same, there will be signature stuff. So we have a dish called “Levitate,” for example. We will be the second restaurant in the world to do floating food. (The other restaurant is Alinea in Chicago.) It involves a heavy gas that will in this case, suspend rose bubbles. The gas will not be burning and you won’t be able to see it or smell it, either. But it will make the rose bubbles appear to be completely levitating.

What is exciting to you about the local produce?

There’s some little pine berries, wild strawberries, there’s pine everywhere. It’s an amazing product that it is completely underutilized within the U.S. It’s more of a Scandinavian thing cooking with pine. We’re definitely going to be introducing some of that into the cooking. The seafood on the East Coast is incomparable; it’s really, really, really good. (Field’s Edge Research Farm in Lititz and Unkle Fungus mushrooms in New Providence are among the Lancaster growers from which Amorette is sourcing.)

We’re also operating the kitchen at a 95% no-wastage policy. We don’t throw anything in the bin. If we can, we reuse (food scraps) for dehydration, making salt, making powders to coat stuff, concentrations, dehydrations, centrifuge to get extra flavor out of stuff, even intravenously injecting flavor back into stuff to make it taste more of “something.” Because we are moving into a generation of “green” — it’s better now than it ever has been because it is really forcing people to be creative.

(Chef) Daniel Humm (of Eleven Madison Park in New York) has done me a great favor; he’s turned it into a completely green vegan restaurant, so we’re moving in that direction. It’s not going to be as quick as it is in Europe, where there’s a lot of that going on. But it’s fast approaching. Being in this farmland is one of the best places in the U.S. to get a hold of all this fresh, unique sometimes, vegetation.

How does it feel to be running a place that’s been closed for so long?

To me, it feels like it’s brand new. It doesn’t feel like a restaurant that was already there and doing its thing because the direction has changed quite significantly from before. There’s been touchups in the dining room, new tableware, new plates, new chairs, trolleys. Everything as far as food delivery is concerned is completely new, including some of the floor staff and most of the kitchen staff. Ninety percent of the kitchen staff is new. It feels like we’re coming into a brand new building that was only open for 22 months before it closed anyway. So it feels like a brand new restaurant, like I’ve been part of it from the beginning, and we’re about to launch it.

One year later: Citronnelle owners look forward to 'season of renewal', focus on a strong 2021

It’s hot, buggy and muggy. I have jet lag. I might get rained on.

A tour of Homefields Farm in Millersville, where all abilities are welcome [farm series]

What Lancaster County produce is in season? Corn, cucumbers and more

Sweet corn lovers, get those chompers ready: The 2021 harvest is officially underway at loca…

30+ things to eat and drink in Lancaster County this summer

After 15 months of parking our butts at home, the words “going out for a bite” have taken on…