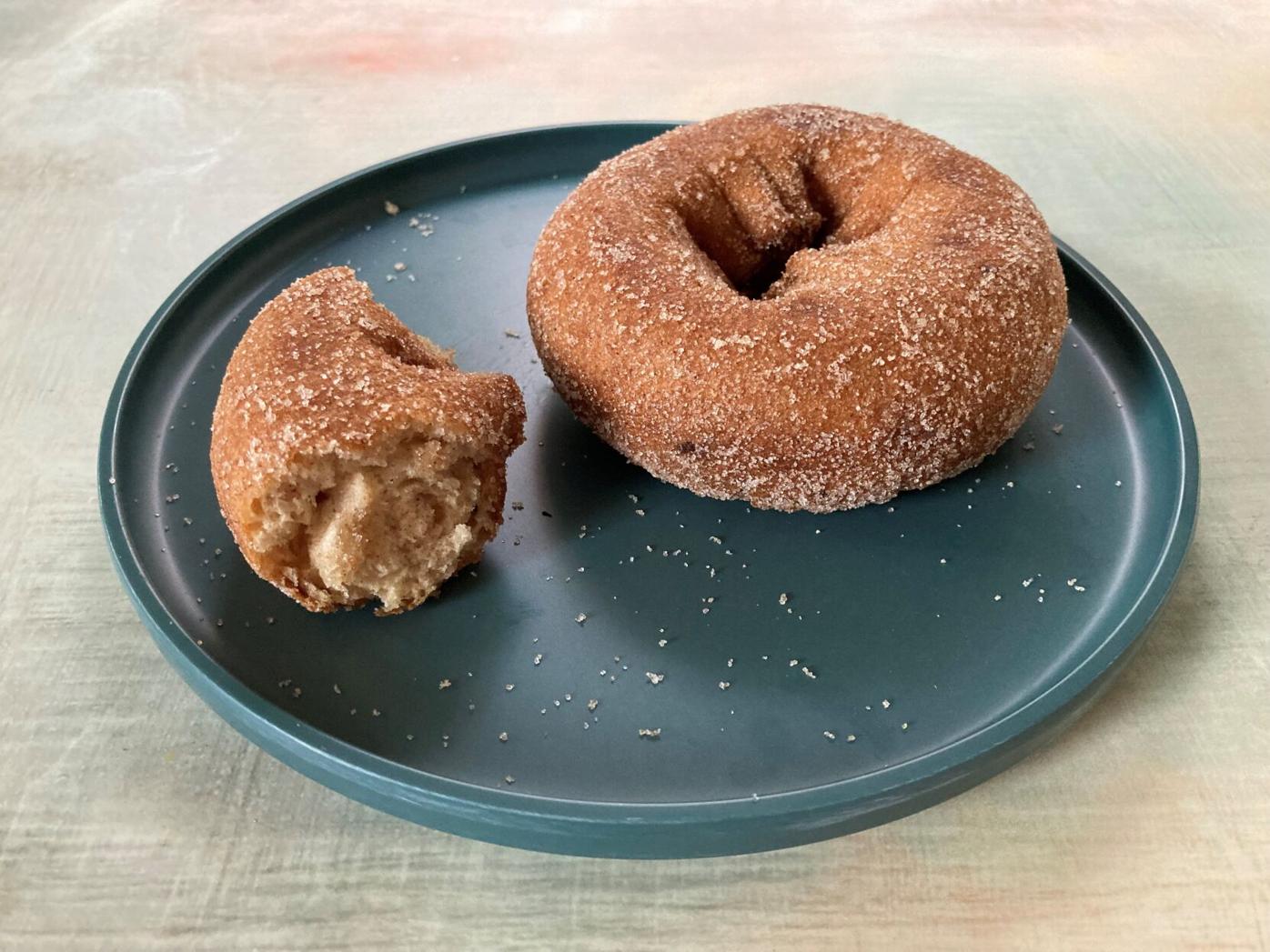 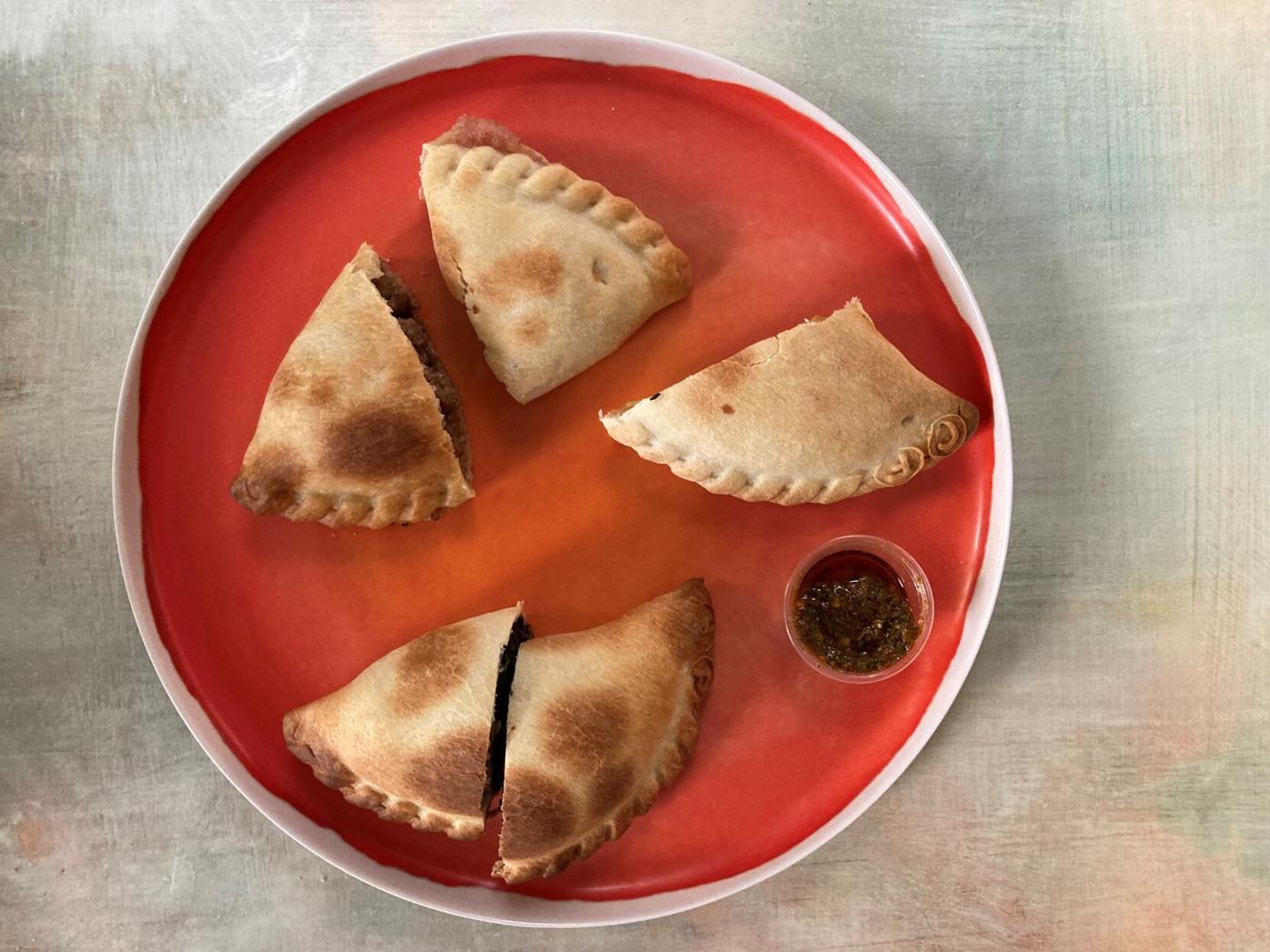 A selection of baked savory empanadas from Empanada Gourmet in Lancaster city. 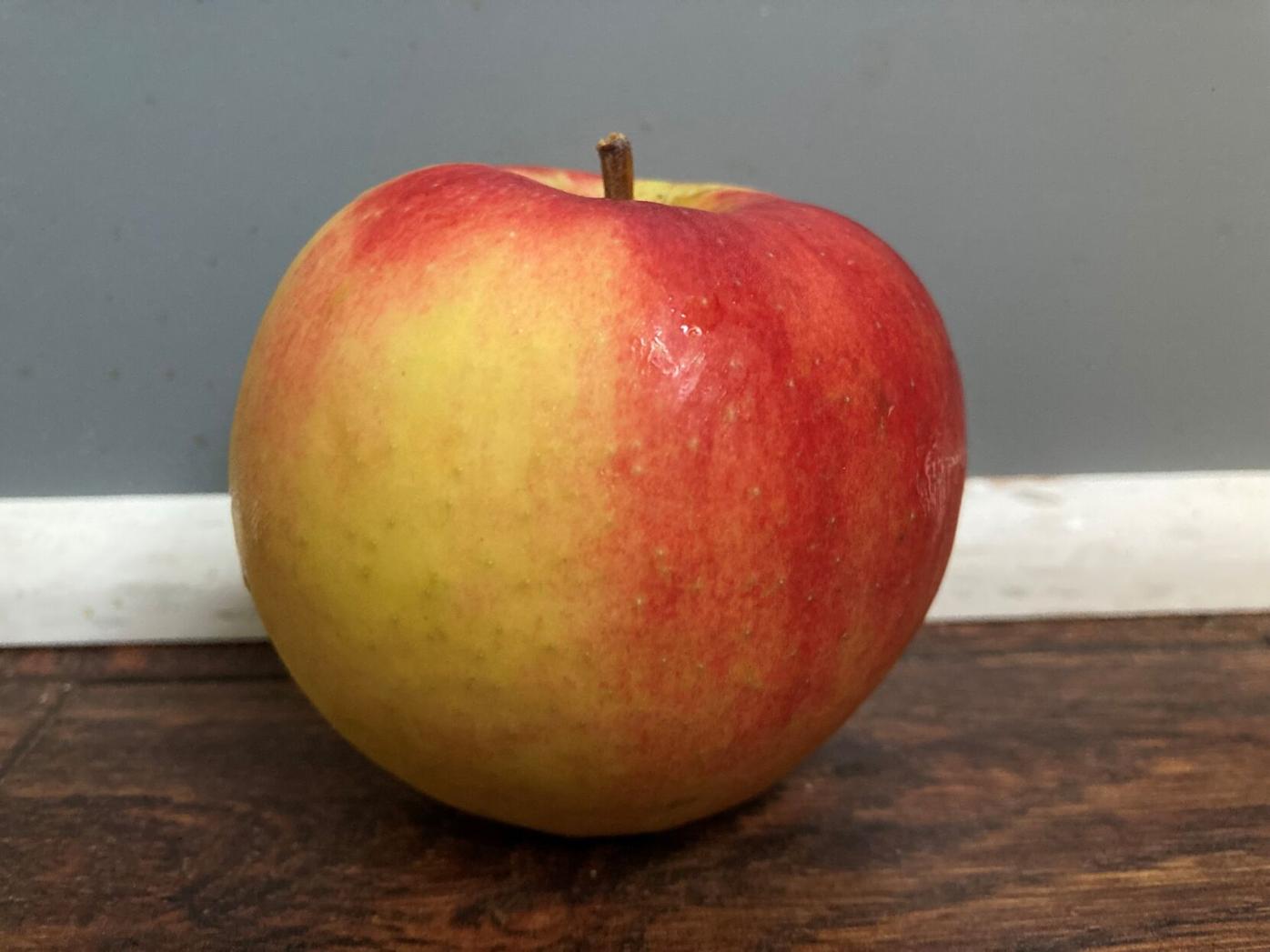 The "Rose Gold" apple is a staff favorite at Masonic Village Farm Market in Elizabethtown. 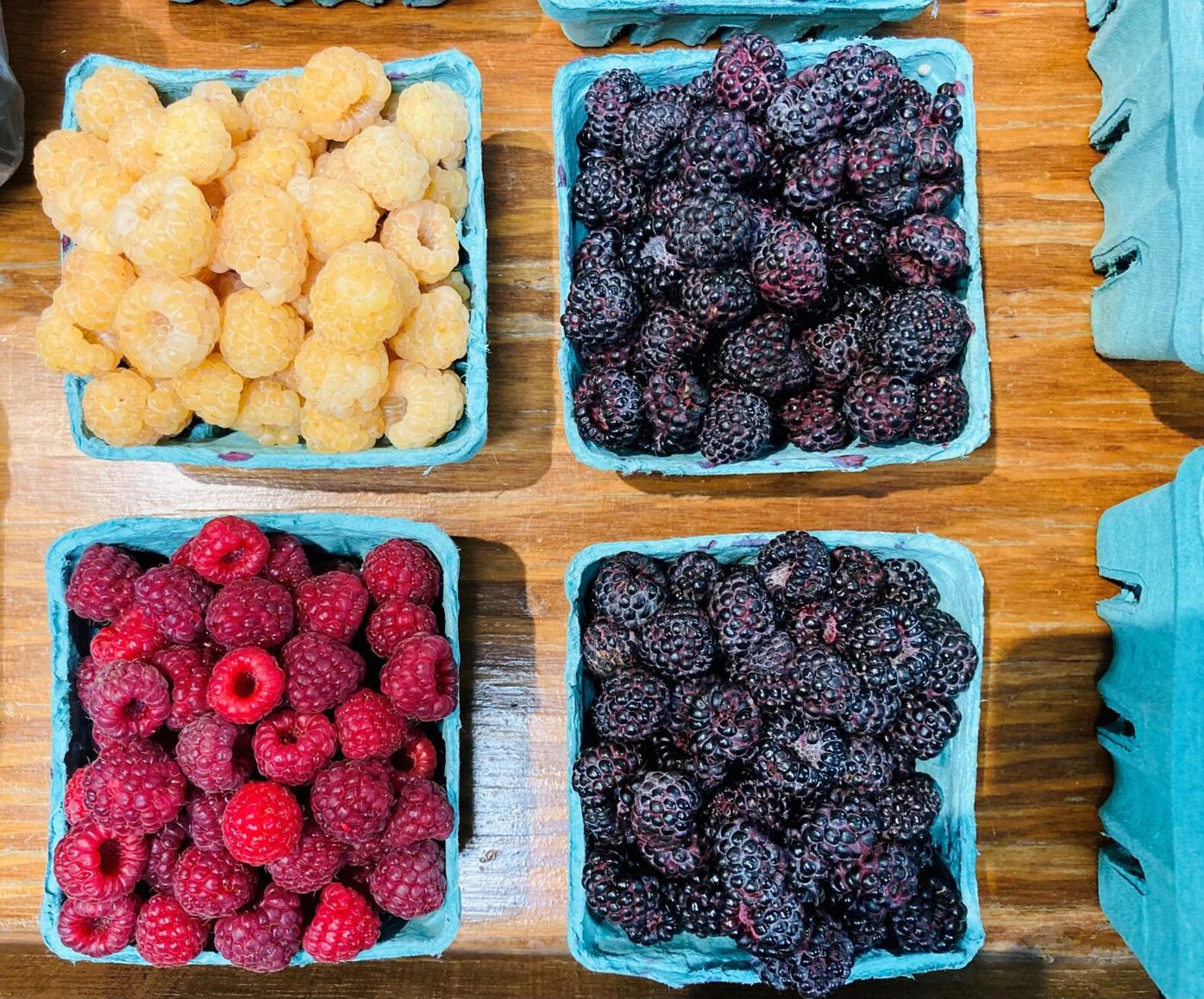 Fall raspberries, some of which are available for pick-your-own, at Brecknock Orchard in Brecknock Township. Pictured clockwise, from upper left: Yellow (aka golden) raspberries; black raspberries and red rapsberries. 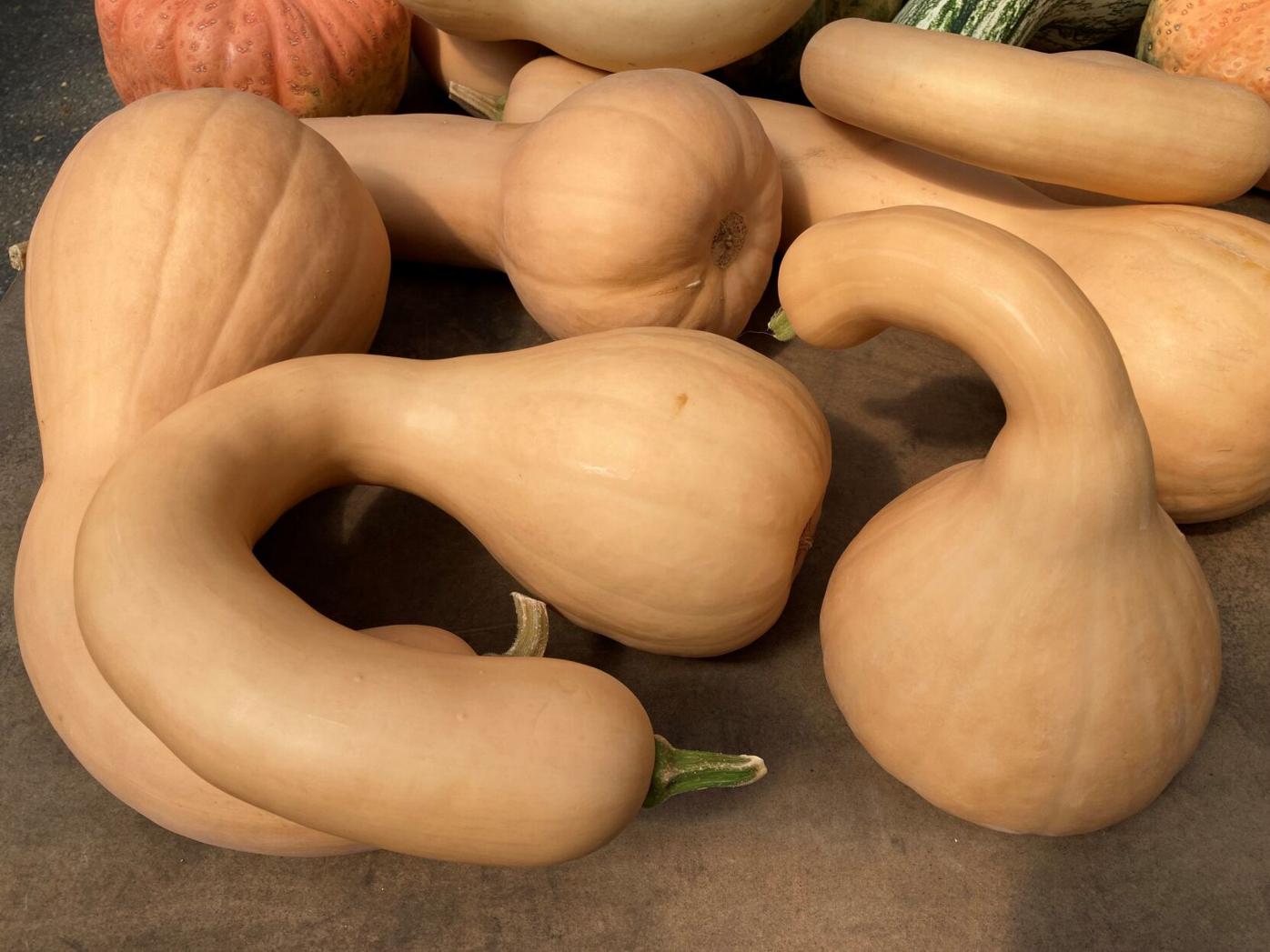 Also known as the Pennsylvania Dutch crookneck squash, the neck pumpkin is an extremely versatile variety of winter squash. 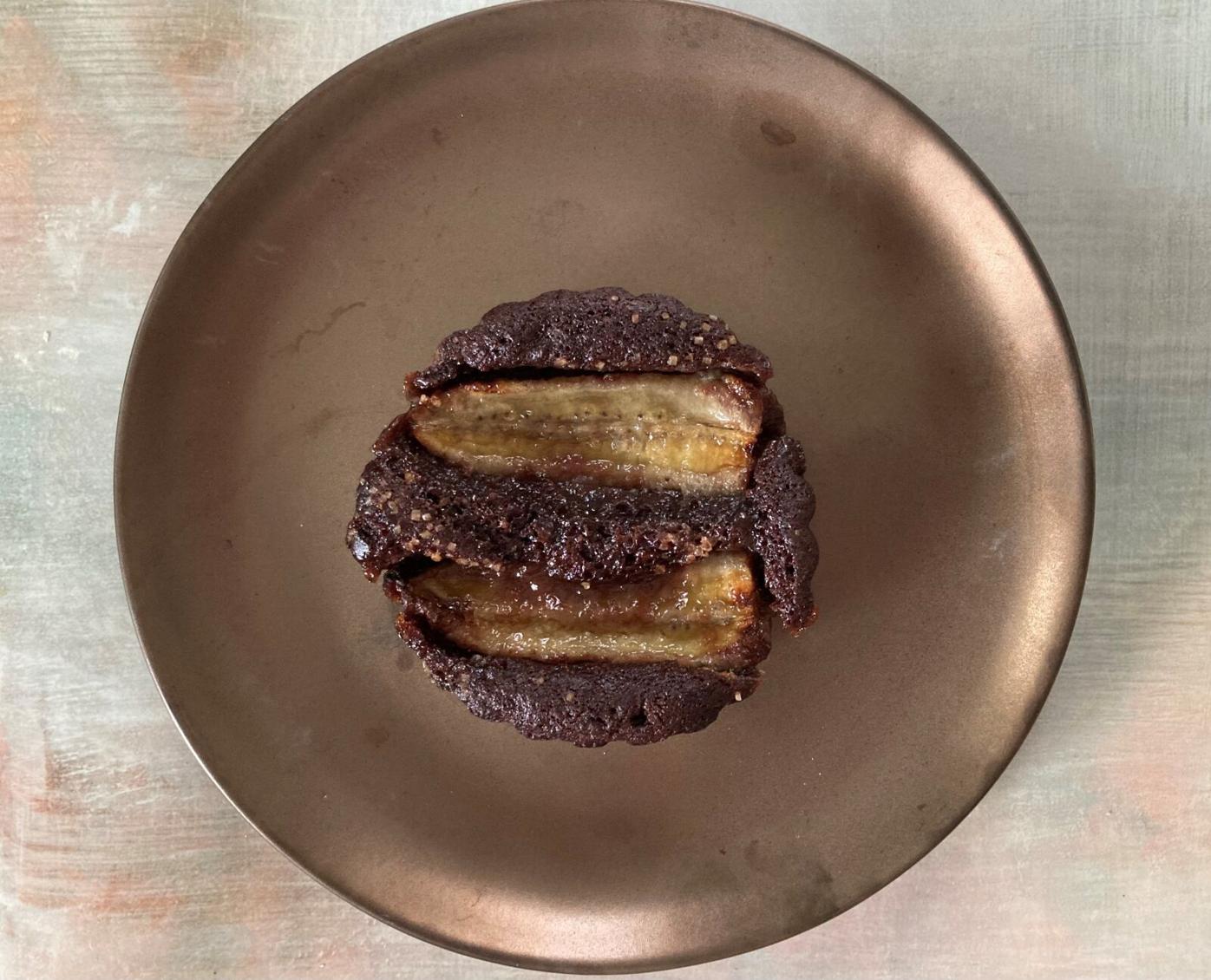 The masala spiced brownie with caramelized banana at Wish You Well bakery in Lancaster city. 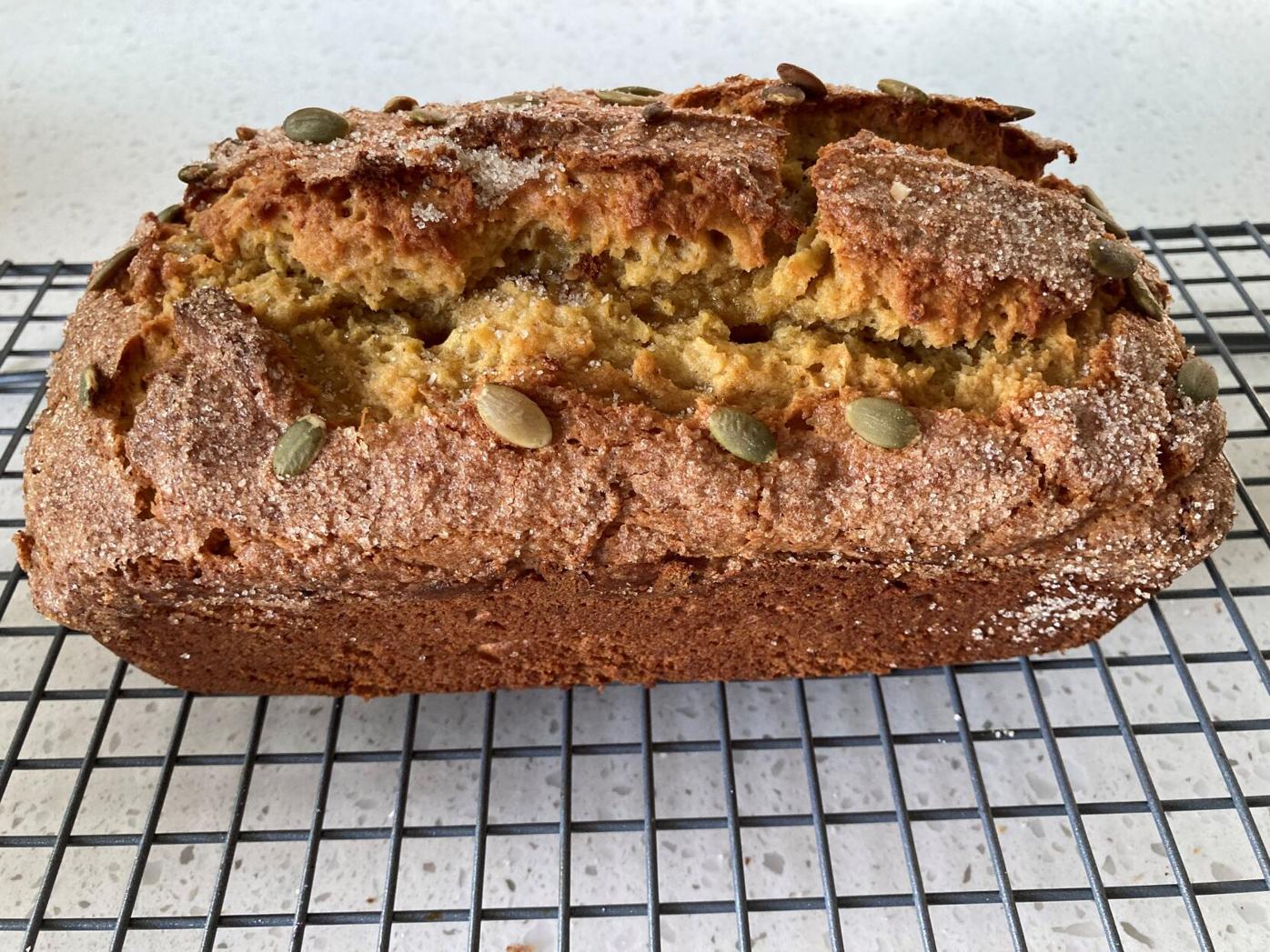 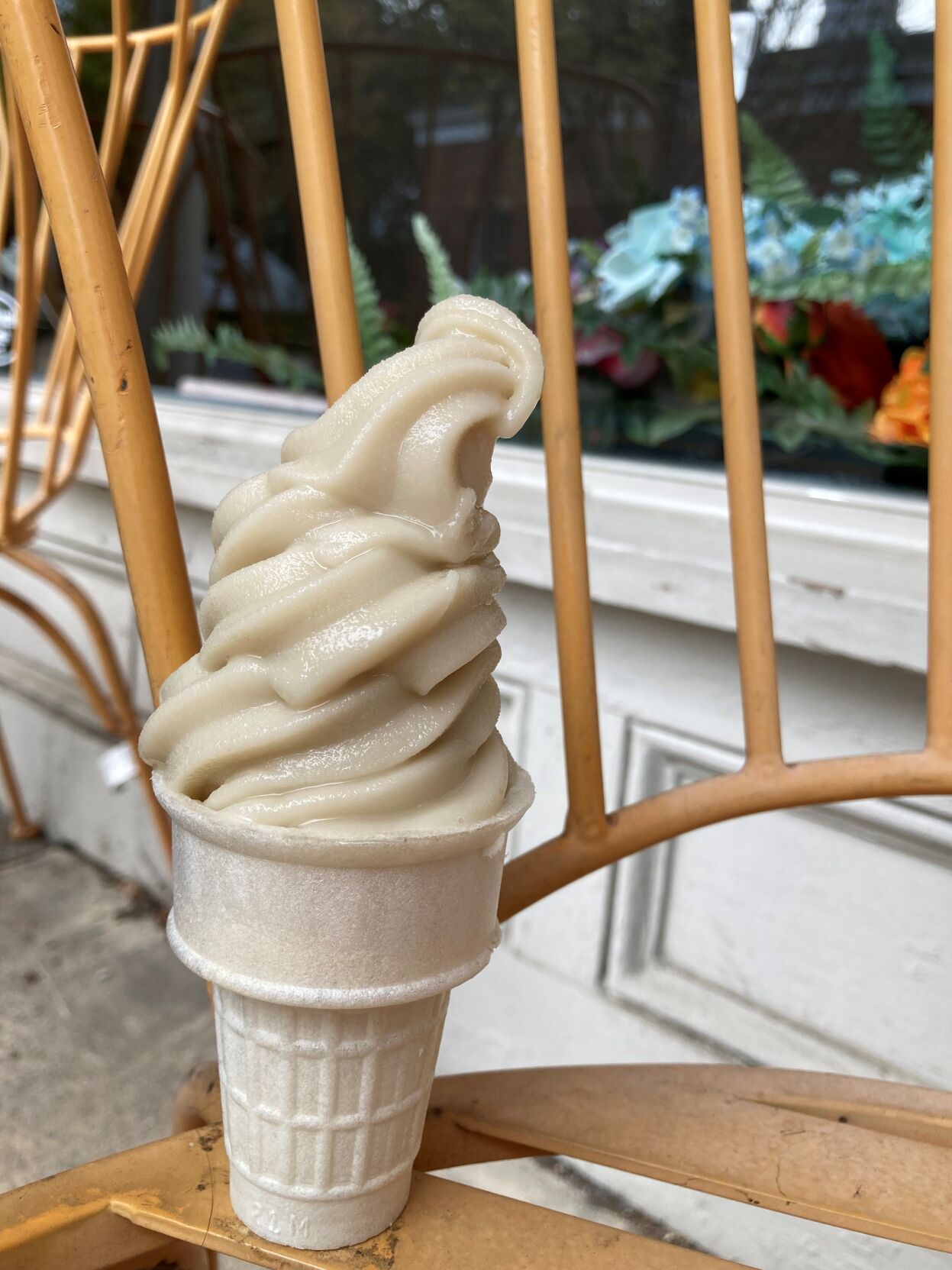 The oat milk-based maple soft-serv at Sugar Whipped in Lititz.

Can you smell it? There’s a distinct perfume in the air that tells you that summer has signed off. You know the one — a mix of caramel, toast and spice, with a smoldering campfire thrown in for good measure. The humidity wanes, the leaves crackle underfoot, the sun radiates more marigold tones than egg yolk. As we throw on our first sweatshirt in months, we may notice a shift in our appetites, too – a yen for warm spices or rediscovering the thrill of crunching into the first apple of the season.

Like we did this summer, we drove around the county in pursuit of eats and drinks that reflect a moment in time, and in this case, capture the essence of autumn in Lancaster. In part one of this two-part guide, we focus on solid matter, the crumbs that we will happily follow and keep as company throughout the fall. In Wednesday’s Food section, we take a look at fall in liquid form, with ideas for sourcing sips, tonics and brothy things. As always, let us know what we’re missing from this list and send a note our way. Here’s to a delicious new season.

We’re an apple-happy household, and during the colder months have been known to each chomp through one a day. But now that I’ve discovered the fall raspberry situation at Brecknock Orchard (390 Orchard Road, Brecknock Township), the apples will simply have to wait. People of Lancaster: There are fall raspberries in the house! I could hardly believe my eyes when I spotted containers of yellow, red and black raspberries on display at the orchard’s market. Then I nearly fainted from excitement when the checkout clerk said that the orchard was still offering pick-your-own for yellow and red varieties. Two days later, I got back on 222 North and picked four quarts of raspberries, pristine and divine. I felt like I was in on a secret, so I’m telling you: Drop everything and do it. The staff tells me pick-your-own berries will continue until the first week of October, weather permitting. But stragglers, don’t despair: I did notice a freezer full of their bagged-up berries, for purchase.

Apple of this eye

Rose Gold is her unofficial name at Masonic Village Farm Market (310 Eden View Road, Elizabethtown); this yellow apple with a paintbrush swirl of pale red was part of an apple breeding trial in 2015, explains farmer and market manager Tad Kuntz. Then known as NZ 2523, the apple was billed as an early-season Gala, but Kuntz, as well as his customers noticed a little more spunk (and a lot less bubble gum) than the typical Gala apple. When the trial ended for good, Kuntz got to keep the trees, which inspired his daughter and her friend to come up with a friendlier moniker. It’s good news for apple nerds like yours truly, who is planning to load up until supplies last, which is mid-October.

If you live outside of the mid-Atlantic region, you may not know what in the world a neck pumpkin is. Think butternut squash with a French horn extension that often is big enough to wrap around your neck like jewelry. I may forever be fascinated by this specimen also known as a Pennsylvania Dutch crookneck squash and in its honor, I share the details for my own spin on pumpkin bread starring neck pumpkin (but of course). Certainly you can make this quick bread with the winter squash of your choosing, but when in Lancaster, why use anything else? P.S. The necks are showing up at farm stands around the county, too many to mention here; check our farm stand guide for spots near you: lanc.news/FarmStands.

Frozen treats tend to make the bottom of my fall wish list (if at all), but I might make an exception for the maple soft-serve at Sugar Whipped Bakery (77 E Main St., Lititz). Made in-house with oat milk, this soft confection is maple-forward but not cloying. Think of all the people-watching you can do while sitting outside of the shop with your cutie-pie cake cone.

As with so many newly opened spots, the pandemic kept me away from Empanada Gourmet (46 N. Prince St.), but I am so glad we have finally met. The storefront space, which opened in early 2021, is a darling new addition to downtown Lancaster, with enclosed patio/courtyard perfect for an autumn nosh. Owner-bakers Nury Vargas and Ivanna Arambillete offer an extensive variety of fillings for their empanadas, the baked hand pies of Uruguay, 12 of which are savory. A few personal favorites include the spinach and provolone; the beans and rice and the Uruguayan (spiced ground beef with sofrito and olives). The chimichurri dipping sauce is legit, too. (Empanada Gourmet also has a stand at Lancaster Central Market.)

The apple cider doughnuts (the pumpkin ones, too!) at Cherry Hill Orchard (400 Long Lane, New Danville) were among my first fall treat discoveries two years ago, and well, they’re staying on the list. I made a pit stop to the orchard’s farm market just for the doughnuts, which I really don’t want any other time of the year. The checkout clerk assured me that pumpkin doughnuts will be on the menu any day, so stay tuned.

In addition to her reliably chewy lineup of hand-rolled bagels, Meghan Young is proving once again her flair for seasonal baking. Exhibit A: the yogurt “pie-fait,” starring her salted caramel apple pie filling with Pequea Valley vanilla yogurt and a little brown butter crumb on top for extra goodness. She’s also got a banana baked into a brownie that’s spiced up with masala, and it totally works. Her Wish You Well Bakery (47 N. Queen St.), opened in June, and we are happier (and girthier) for it.

If you live outside of the mid-Atlantic region, you may not know what in the world a neck pu…

A text message appeared on my phone while we were on vacation last month. It was from Diana …

What apples are in season in Lancaster County?

Here are more than 50 apple varieties grown throughout Lancaster County.

Here's what Lancaster County produce is newly in season, plus what's about to end

The first half of September is what I like to think of as the “sweet spot,” when late summer…

In the 1950s, while an undergraduate at Penn State, I was passing by a dorm room door after dinner and I heard a soft musical instrument being…

Make a pumpkin planter, design a butterfly garden: 75 things for plant people to try in October

Here are a dozens of classes, talks and plant-related activities through October.

When does daylight saving time end, and when do clocks get turned back?

Since the start of fall, you may have noticed that it's getting darker sooner every day and the temperatures are starting to cool.

8 things to sip on in Lancaster County this fall

In the second part of this two-part series celebrating fall in Lancaster, we go on a liquid diet and encourage you to tag along. With the cool…

Here's where you can get freebies and deals Wednesday, Sept. 29, for National Coffee Day

What’s better than a cup of joe on a lovely fall day?

Quarryville native auditions on NBC's 'The Voice'; here's what the judges said

Kayla Lilly, a Quarryville native who's a senior at Temple University, auditioned on NBC's "The Voice," in an episode that aired Tuesday, Sept. 28.

Last month, visitpa.com, the tourism arm of the Pennsylvania Department of Community & Economic Development, rolled out its latest batch o…