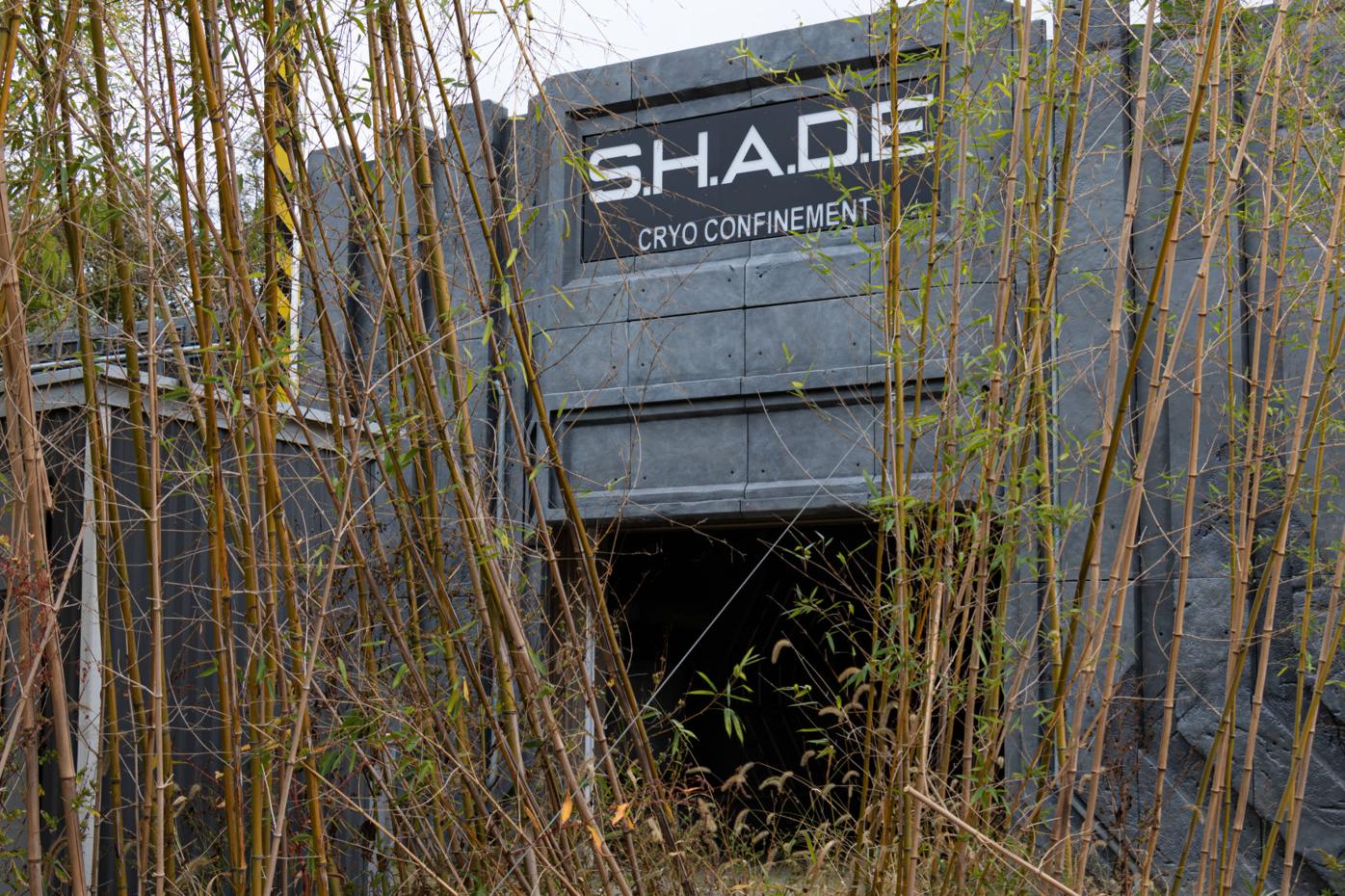 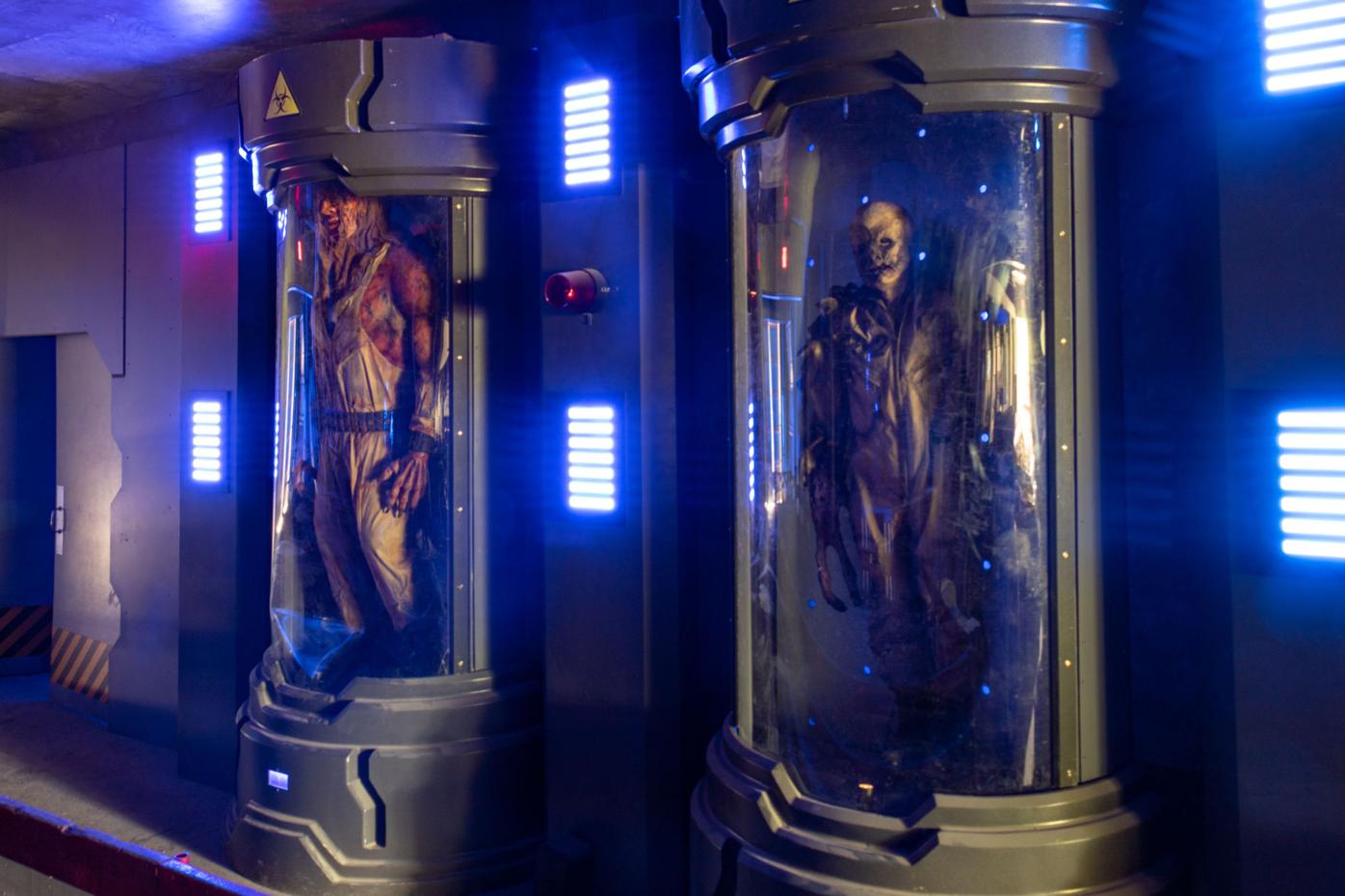 Human/non human mutations in a cryogenic facility are part of the new hayride at Field of Screams. 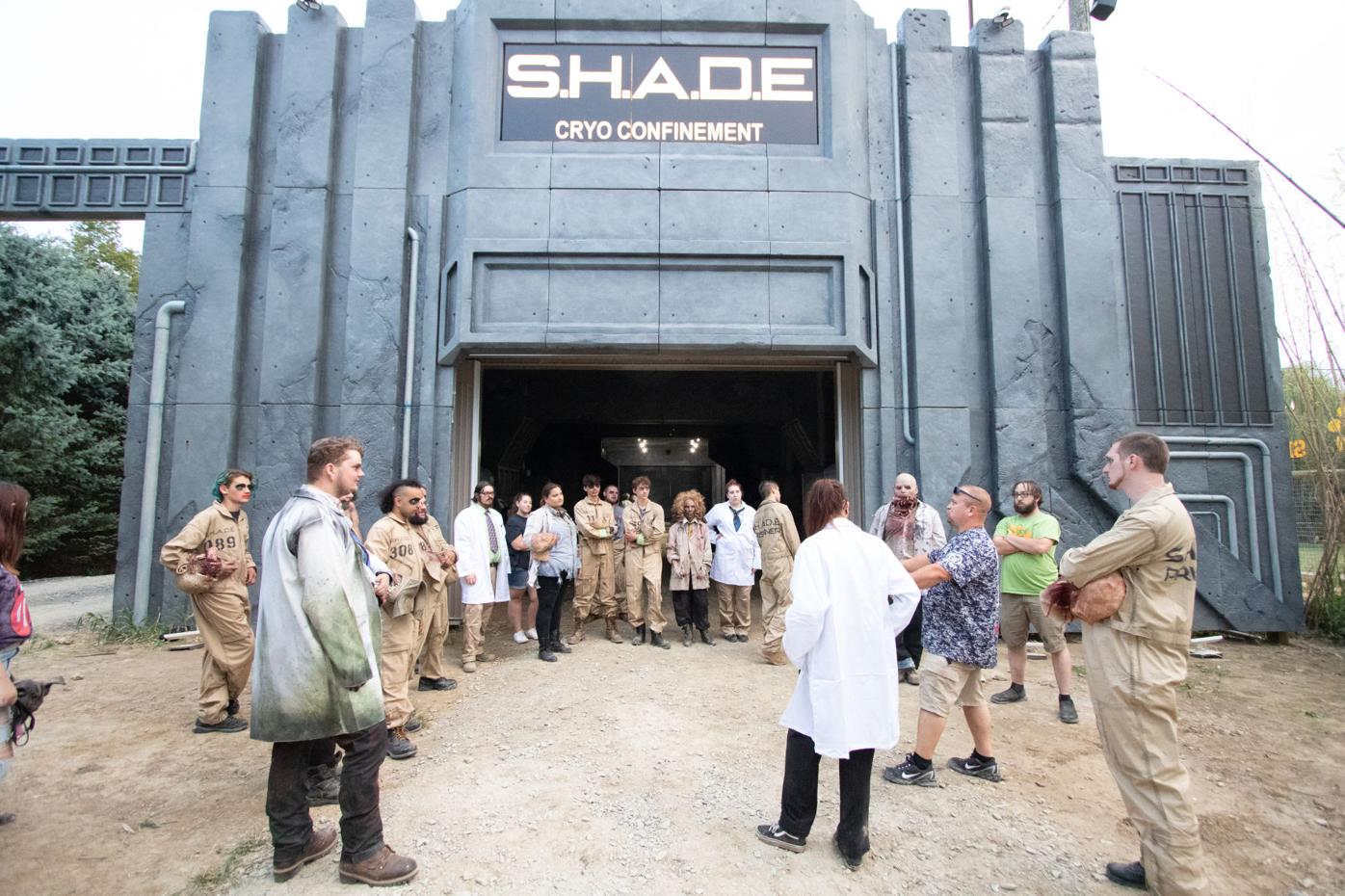 Some of the staff that brings to life the horror inside the Field of Screams SHADE Cyrogenic Facility. 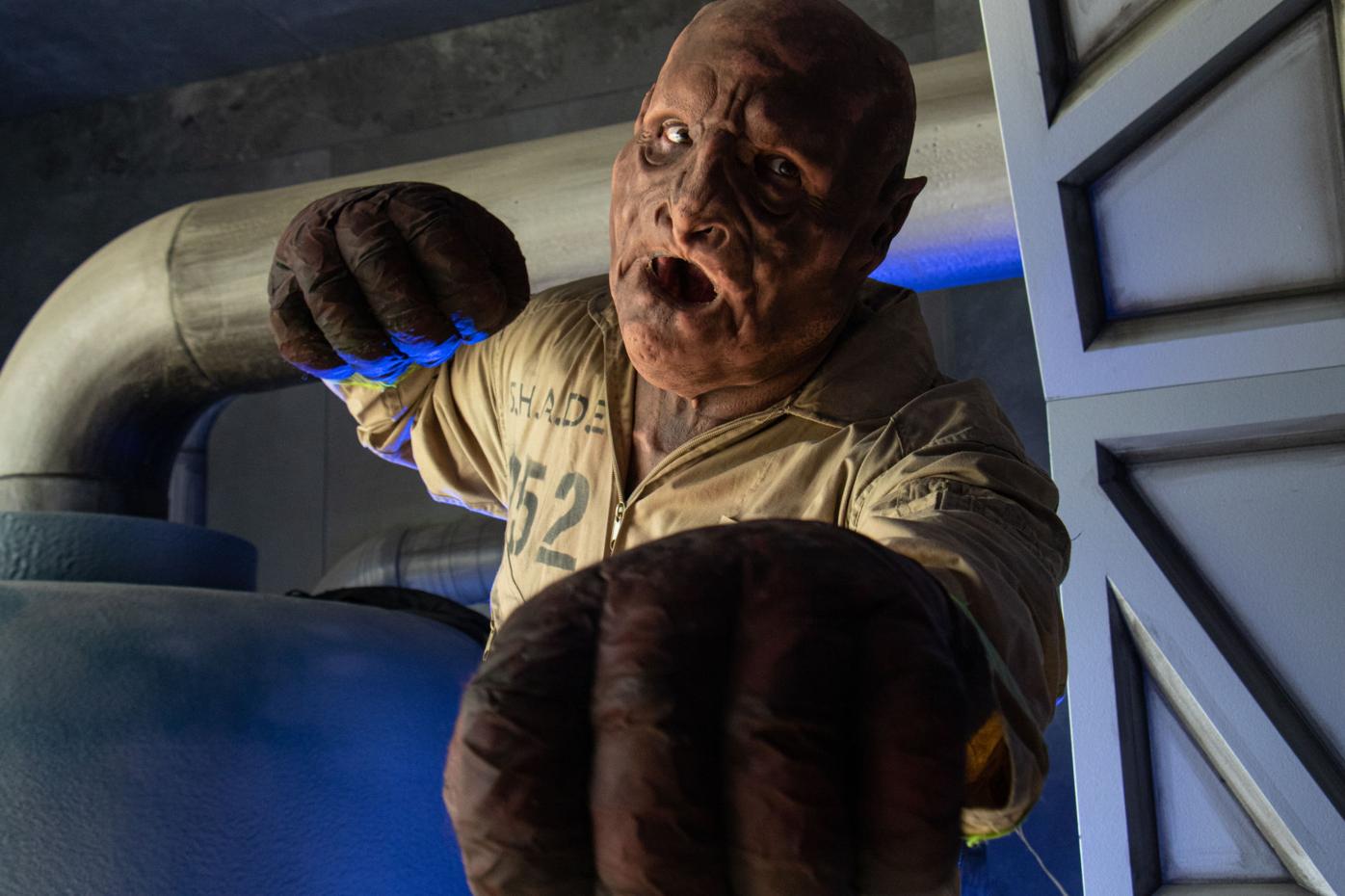 A mutant escapes his pod at Field of Screams' 2019 attraction. 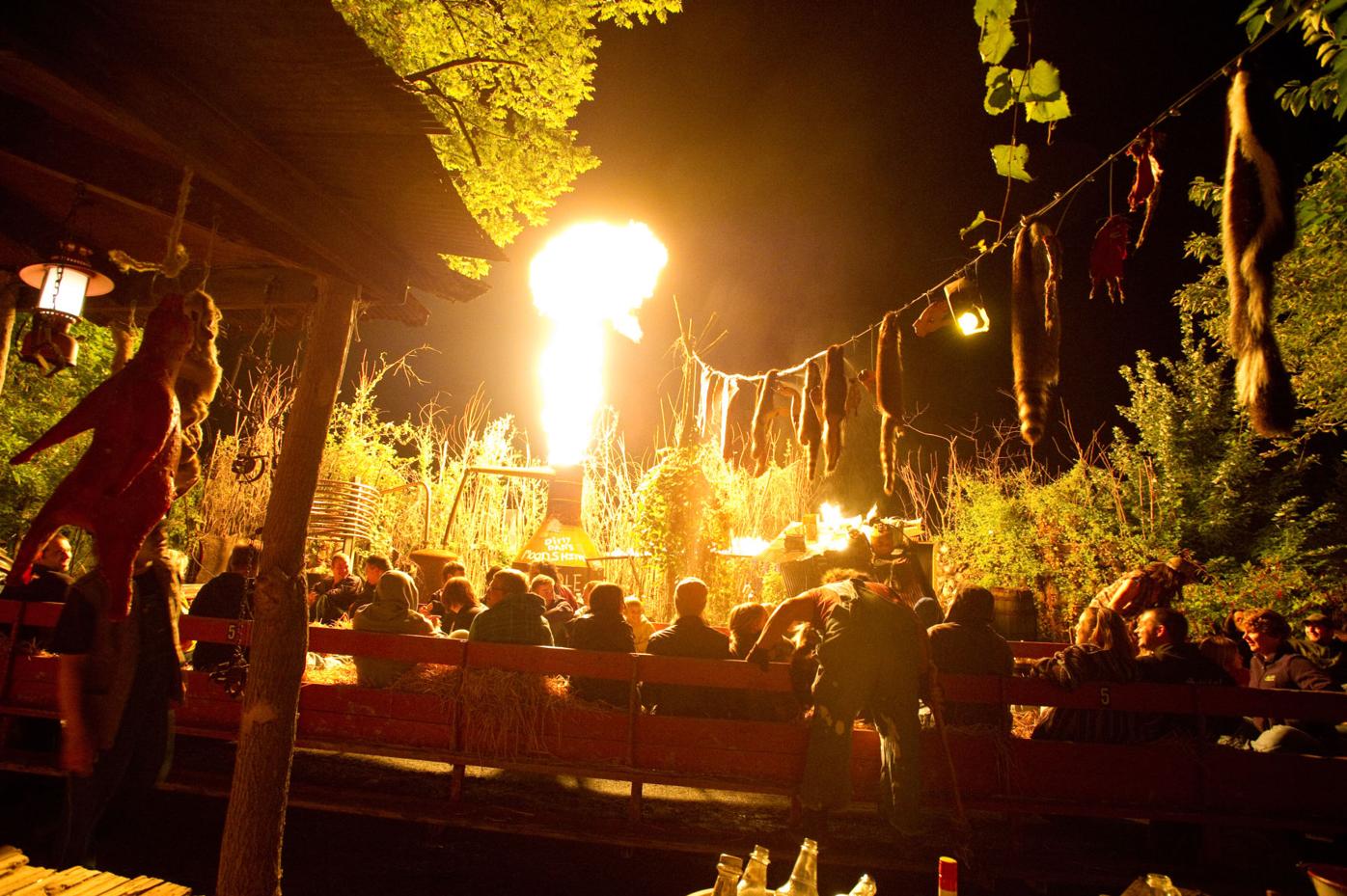 Another hayride scene from Field of Screams.

When Field of Screams opened its doors for the season on Friday the 13th of September, a full moon shone down from a clear sky and the air was cool enough for hoodies.

“You couldn’t have written it any better,’’ says Jim Schopf, who along with his brother Gene opened the popular Halloween haunt back in 1993.

“We had our best opening night ever, and it has just continued.’’

Field of Screams covers dozens of acres on the Schopf family farm in Mountville. It features two haunted houses, the Den of Darkness and Frightmare Asylum, plus the Nocturnal Wasteland walk through the woods.

But it all started with a haunted hayride and that is still arguably the most popular attraction. Especially now.

This year the hayride has been upgraded to include an almost Universal Studios-like experience for unwitting passengers, according to Schopf.

Necessity initiated the change. Corn Cob Acres, the Schopf’s family-friendly seasonal attraction, is on the same property. In order to add on to that, it was necessary to change the route of the hayride.

As part of the hayride, the wagon pulls into large buildings where passengers encounter special scares. Schopf says they decided to build on that theme.

“Having buildings where the tractor and wagon stops and the doors close is a great thing to do,’’ he says. “We can do more elaborate scenes and setups.”

Elaborate is an understatement. The addition to the hayride is big, he says.

“It’s the foundation of Field of Screams, so we don’t ever skimp on anything.’’

The pole barn built for the new scene is 120 feet long and divided into different parts.

Visitors enter a state-of-the-art cryogenic testing facility, where a scientist is conducting a tour.

Pods filled with mutated human/nonhuman creatures line the walls, but no worries, you are assured. All is safe.

Needless to say, alarms begin sounding and the tour is hurried to the next room, where they watch on large screens as the creatures break free and wreak havoc, eventually finding their way into the room with the tourgoers.

“It’s massive,’’ Schopf says. “It’s unlike anything we’ve ever done. It’s different from the other components, and I was concerned that maybe people wouldn’t like it. But that was not the case.”

With the scary season looming, 'Wait Until Dark' comes to Fulton Theatre

As large and popular as Field of Screams is now, with preshow entertainment, special events and visitors coming from miles away, it’s hard to believe that it was ever any different.

“When we started it, I was in college and my brother was just out of college,’’ Schopf says. “We didn’t really have a business plan.

“We thought it would be a cool thing to take people on a hayride and jump out and scare them, a way to make a couple bucks and have fun.’’

Schopf remembers having so few actors (and by actors, he says, it was just friends wearing masks), that he would have to scare people at one location and then sprint across the field and put on another mask for the next scene.

Now, at 47, he thankfully doesn’t have to do any field sprinting.

From the 20 or so people who made the first hayride happen, Field of Screams has grown to have 400 volunteer actors — 150 to 200 on any given night. Each attends scare school and actor training.

Schopf, who quit his job as a teacher eight years into the business opening, enjoys working with the teenagers who make up most of the acting crew.

The group becomes like a large family, he says, and they do a lot together.

“We play laser tag, paintball. We have parties. There’s a lot of team building and bonding,’’ he says.

And kids who may not acknowledge each other in the classroom are friends as actors, he says. That aspect is particularly gratifying to him.

In 1995, after two years of hosting the hayride, the Schopfs decided to add a haunted house in a 200-year-old barn on the property.

Ironically, when the Schopf boys were in elementary school, they created a Halloween haunted house in that very barn for friends and family.

At the end, their mother would serve cookies and apple cider.

So the tradition of scaring people goes way back in the Schopf family. “I blame my mom,’’ he says with a laugh.

In fact, the family matriarch — at age 80 — still dons a costume and scares people.

“She dresses like a bag lady and pushes around a wheelchair with a skeleton,’’ he says. “It is hilarious watching. She scares a lot of people at the entrance.’’

When the Schopf brothers were young, in addition to creating their own haunted house, they would visit the Lancaster County Halloween event, Scream in the Dark.

The legendary Checkered Room, the classic jump scares, the various scenes and setups all left an indelible impression on the boys.

And Schopf is proud that Field of Screams can continue that tradition.

“It’s neat from my perspective, not in a bragging way, that Field of Screams exists.

“A lot of people have memories of Scream in the Dark, and there’s not many places like that, not at the scope of Field of Screams.’’

In addition to thrills, jumps and laughter, Field of Screams provides patrons with something else.

“It’s a pretty neat memory that people will have for the rest of their life.”

What: Field of Screams

Get lost: 6 corn mazes in Lancaster County to visit this fall

With Lancaster County's many acres of corn fields, the humble corn maze is an expected but cherished part of fall time in the area.

Get lost in Lancaster County's many maize mazes this fall

With Lancaster County's many acres of corn fields, the humble corn maze is an expected but cherished part of fall time in the area.

Civil War reenactors recreated the war scene at LancasterHistory Satuday. Visitors could chat with Union soldiers in their tents, as well as w…

Last week, we took a dive into LNP's archives to find out as much as we could about Scream in the Dark, the granddaddy of Lancaster County Hal…