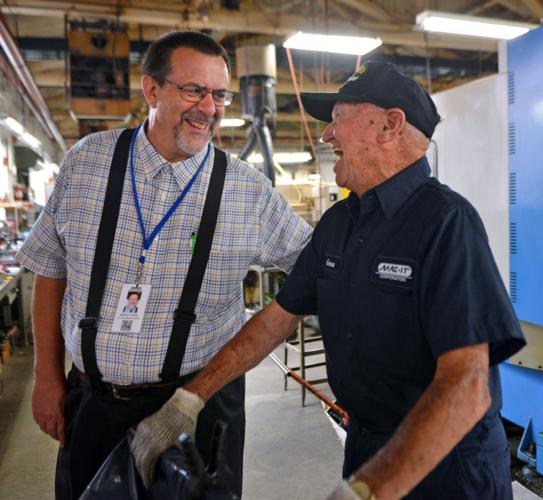 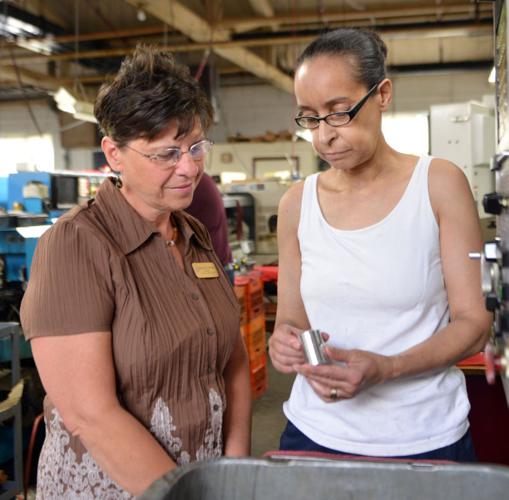 Chaplain Brooksyne Weber, left, talks to Julia Aceuedo about the work she does at Mac-It in Lancaster. 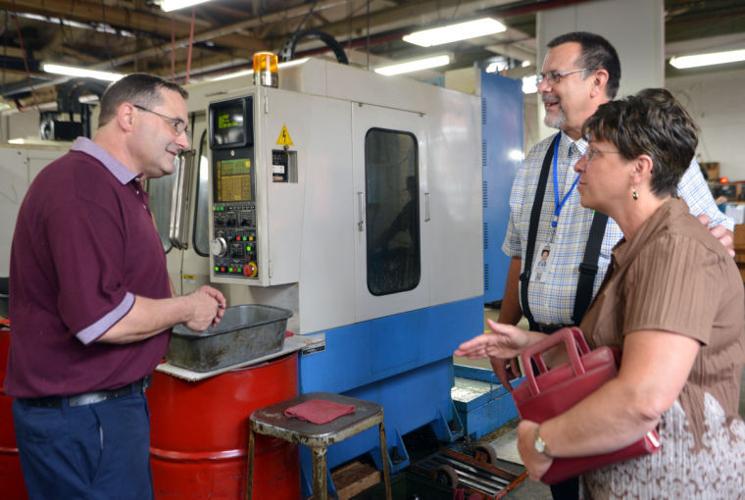 Gene Kauffman, left, an employee at Mac-IT in Lancaster, speaks with chaplains Stephen and Brooksyne Weber.

Chaplain Brooksyne Weber, left, talks to Julia Aceuedo about the work she does at Mac-It in Lancaster.

Gene Kauffman, left, an employee at Mac-IT in Lancaster, speaks with chaplains Stephen and Brooksyne Weber.

Denise Lefever had a lot on her mind the first time chaplain Brooksyne Weber appeared at her workplace.

She'd recently suffered a heart attack and was facing a variety of personal issues.

"I was kind of afraid to speak to Brooksyne. But ... my plate was sort of overloaded, and I thought I might as well take advantage of it," said Lefever, who works at Vallorbs, a precision machining plant in Bird-in-Hand.

Afterward, Lefever felt a load had been lifted, and she turned to Weber  for guidance again and again over the next seven years.

Brooksyne Weber and her husband, Stephen, are independently employed chaplains who travel to 10 companies in Lancaster and Lebanon counties to offer a listening ear and kind word for employees.

As opposed to hospital chaplains who support people in times of crisis, or pastors who see the devout at church, "We go where (people) are," Brooksyne Weber explained.

They aren't the only ones. Workplace chaplaincy, a practice that dates to the industrial revolution, has seen a resurgence in recent decades, according to Faith Ngunjiri, director of the Lorentzsen Center for Faith and Work at Concordia College in Moorhead, Minnesota.

Ngunjiri has spent the last three years conducting research among business leaders, chaplains and employees at companies with chaplain programs.

“It’s not just the Bible Belt," she said.

"Even though there are definitely more chaplains in place like North Carolina, Texas and Arkansas, you’ll find these services ... as far out as Seattle.”

The resurgence, she said, is rooted in both faith and economics.

Rick Steudler, a co-owner of Vallorbs, explained how having the Webers  available to employees upholds his Christian values.

"We're supposed to love one another. If someone comes to work for you, obviously there's a business relationship, but at the same time you also have a responsibility to them as  people that you care about. If they're suffering, that's a problem for me."

And it can also be a problem for productivity or workplace morale.

"In the end, a happier person or someone who is dealing with issues is a better worker, too," Steudler said.

Arriving at Vallorbs last Tuesday, the Webers made their weekly rounds, with Stephen approaching male employees and Brooksyne heading toward the women.

They greeted each person with a smile, maybe a pat on the back and a question about how they were doing. Sometimes they also asked about a family member, such as a parent with health issues or a child who recently had a big event.

"We're just a bright spot for their day. We want to be more than that, but (that's) a minimum," said Stephen Weber, who worked as a church pastor for 25 years before the couple branched into workplace chaplaincy in the early 2000s.

The Webers and other workplace chaplains stressed that they're not there to convert or preach.

“I deal with people of every walk of life. My job is not to judge them or do anything other than to see how I can help them,” said Steve Garcia, a chaplain at Tyson Foods in New Holland.

The chaplains hear stories running the gamut from marriage problems, to addiction to challenges with aging parents.

They respond with supportive words, prayers when requested and any materials that may assist an individual.

For instance, Brooksyne Weber gave one woman a guide for suicide survivors, called "For those left behind."

"That booklet just made such a difference for her. We talked about it many times. There's something gratifying about being able to reach a person in the deep recesses of their heart. ... That's a big responsibility that we don't take lightly," she said.

Workplace chaplains do get a cold shoulder from some employees, and they all said they respect the space of those individuals.

But Stephen Weber said most people warm up to him and his wife over time. He recalled an atheist at one workplace who he learned had cholesterol problems. So does Weber.

"You just find points to talk about, and he ended up being very pleased to see us weekly," Weber said.

Many companies have Employee Assistance Programs, services that employees can turn to in times of crisis.

But such programs are impersonal and see low usage rates, according to Jason Brown, a spokesperson for Plano, Texas-based Marketplace Chaplains USA, a chaplain contracting company.

Chaplains, he said, can be faces employees see through good times and bad.

Tyson Foods runs one of the largest in-house corporate chaplain programs,  with 85 chaplains in the U.S. and 30 in Mexico and Brazil. Mike Tarvin, the director of chaplain services, explained why he thinks the program's important.

“In today’s culture, a lot of folks don’t have a minister or a pastor or a priest or a rabbi in their life, but they’re still faced with the same kind of issues those folks would help with … . Our chaplains then step up beside them to help."

Or as Vallorbs employee Bev Bridges said when talking about the Webers, "We need them."

Kara Newhouse is a Lancaster Newspapers staff writer who covers K-12 education trends and policies. She can be reached at knewhouse@lnpnews.com or (717) 481-6013. You can also follow @KaraNewhouse on Twitter.