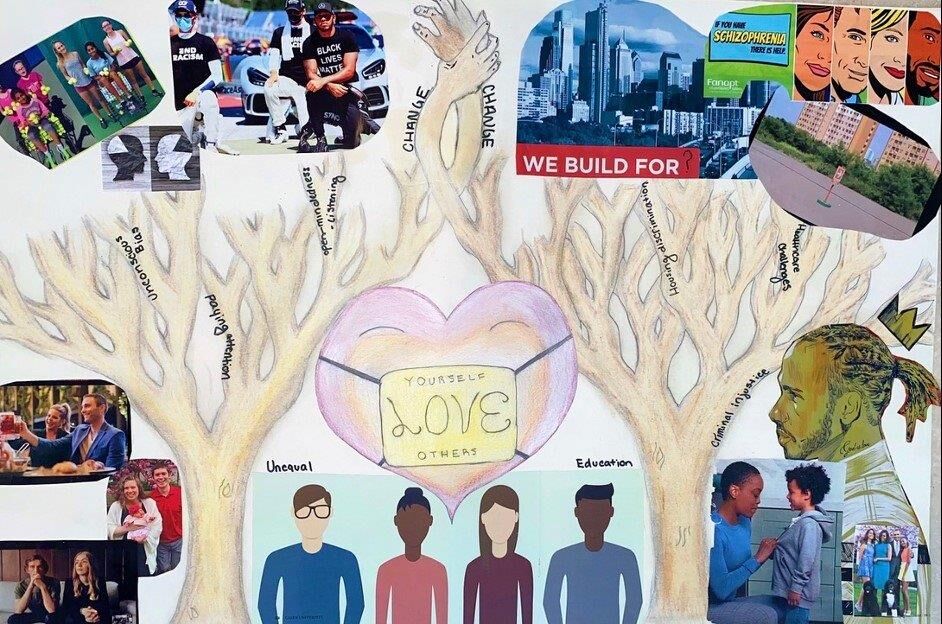 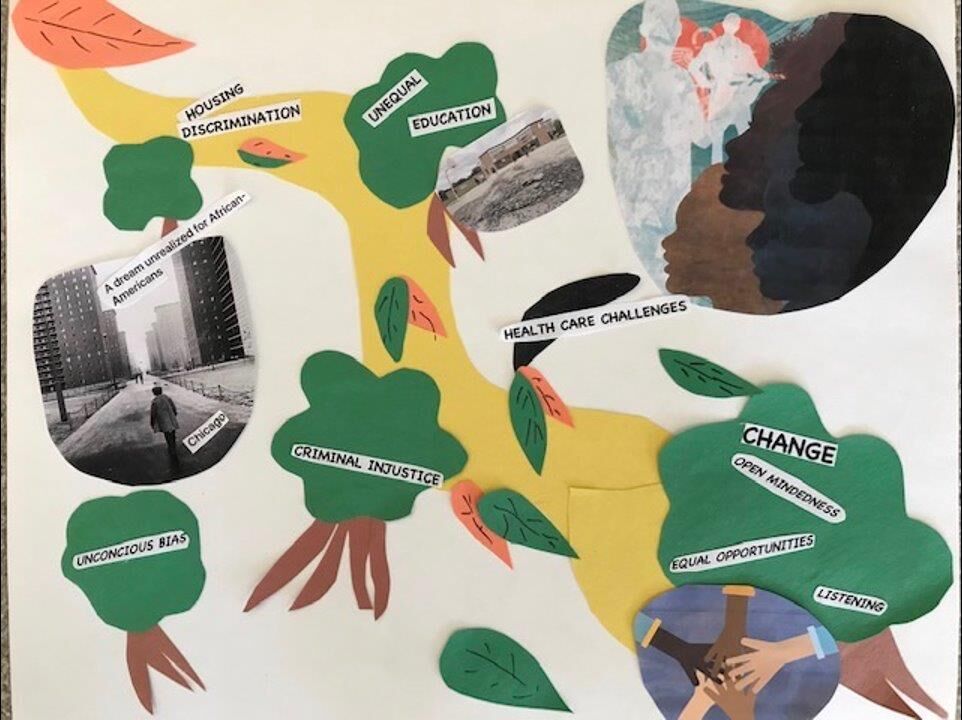 It’s been nearly a year since Marilyn Langeman joined around 80 fellow residents of Landis Homes for a silent, outdoor vigil following the death of George Floyd.

“A number of people who were there, afterward, said we need to continue our work,” Langeman says. “We decided to begin with education and examining our own racism that we maybe don’t recognize.”

An anti-racism resident group formed at Landis and now meets monthly, primarily via Zoom. Members have added a related bookshelf to the library and have amassed a virtual mailing list of residents who are given updates with suggestions for books and online courses.

“There are people here who think that we’re overblowing it, we’re exaggerating,” Langeman says. “But there are many of us here who are interested.”

The same can be said of residents of some other Lancaster County retirement communities where similar groups formed last year. And the point isn’t lost on those involved that this is happening in a type of community that — both locally and nationally — is predominantly white.

Consider the racial breakdown of communities nationally for which leaders were surveyed in “Diversity in Senior Living Communities: Insights into Creating a More Diverse Census.” Residents in those communities were described as 95% white, 4% Black and about 1% Asian.

“Residents have grown very active over the last couple years — and particularly over this past year — looking more at roles they can play and what they can do internally and externally in their greater community,” Love says.

His firm’s diversity study followed an increasing number of discussions and questions — many coming from some Quaker-run senior living communities across the mid-Atlantic, he says.

“The residents at those communities — reflecting the overall Quaker philosophy — tend to be more welcoming and understanding and receptive to all facets of diversity, whether it’s race or sexual preference or whatever,” he says.

Some retirement communities are out of financial reach for many seniors regardless of race. A host of issues complicate matters further when race is considered.

“Every culture is different when it comes to working with your aging families,” says Jennifer Shutt, director of community services at Moravian Manor Communities. “We are inclusive. We would like to be more diverse. We would love to have a very diverse population.”

Moravian residents also organized 8 minutes and 46 seconds of silence in June in response to the killing of George Floyd.

“After that there was just a push for us to talk about diversity and awareness,” Shutt says. “So we started to get a number of speakers together.”

The first was Kevin Ressler, president and CEO of the United Way of Lancaster County.

“He really gave his own, personal testimony (via Zoom),” she says. “The title of the program was ‘Beyond Southern Sentiment. Racism Feels at Home in Lancaster.’ ”

Ressler gave some suggestions. The group continues looking for more.

Shutt was also approached by Chris Kennedy — a locally-based national consultant on issues related to aging — to help her pilot an intergenerational program.

For that, a few Moravian residents were paired with college students connected to Brightside Baptist Church in Lancaster. They shared life stories, worked on art projects and presented those to friends and family.

“We have very social-minded residents, and we also have very educated residents here,” Shutt says. “So when they’re looking at a topic, whether they agree or disagree, they want to learn more ... They also want to know how they can be part of the change.”

Cynnie King is a member of the racial justice committee formed last year at Homestead Village.

“We’re all seeking a sense of purpose and mission. Maybe that’s particularly important as you move into retirement,” King says. “How do you hold onto that? And what does that look like as you move into the next chapter?”

She sees a need to develop honest, respectful and productive conversations.

“It’s just like everywhere else. There’s a political spectrum here … which creates its own sort of sensitivities,” King says. “You don’t want to pull the community apart because of strong points of view.”

The racial justice committee and the life enrichment staff at Homestead Village have worked together to sponsor four interactive diversity and inclusion trainings provided by the YWCA; create a library of racial equity books and resources; hold a six-week learning series provided by QUEST; and hold conversations about cultivating diversity and identifying practical ways to encourage it.

Also, through a Moving4Change! Initiative, Homestead Village residents raised $5,000 for Advantage Lancaster, which helps teens within the School District of Lancaster.

“The racial justice committee was certainly formed over the events of the past year. And they are on an education journey,” says Homestead President Douglas Motter. “But they also want to make a difference … They are fundraising. And we encourage them to make those efforts. We’ve supported it as part of our life enrichment budget.”

In addition, Motter says, Homestead Village, like other local communities, is looking at how it can be more diverse.

That includes taking “very aware and deliberate” steps toward a more diverse leadership and governance, being mindful of those who interact with perspective residents, he says.

“We can’t control the applicants. But we can certainly adjust our approach to trying to be more inclusive in all aspects of our organization,” Motter says. “You’ve got to start somewhere.”

Landis Communities leadership issued a statement after Floyd’s killing citing the need to be more aware of inequalities and create a more inclusive culture. The organization is working through a series of goals for putting words into action, she says.

From a purely economic perspective, reaching a broader range of potential residents might not have an automatic bottom line payoff in a county where waiting lists are the norm for senior living communities.

“In Lancaster, it’s just an extraordinary hotbed of very successful communities,” Love says. “But it’s not really indicative of the country as a whole.”

Nationally, retirement communities tend to average 93% occupancy, he says. So casting a wider net could be beneficial on the fiscal front, he says.

Race and retirement savings is getting a lot of attention. In March J.P. Morgan Wealth Management announced plans to hire 300 additional Black and Latinx advisers by 2025 and noted for those groups a “lack of trust in financial institutions, lack of access to solutions and investments education, and systemic issues all lead to lower ownership of wealth-building products.”

The company also cites Federal Reserve data that indicates that only 34% of Black families have retirement accounts compared to 60% of white families and that the median retirement balance is $46,100 versus of $151,000 for white families.

Many Black seniors know the struggle of using savings to take care of older relatives and children at the same time, says Jim Johnson, who is himself Black. He’s the William R. Kenan Jr. Distinguished Professor of Strategy and Entrepreneurship at The University of North Carolina’s Kenan-Flagler Business School.

“I’m 67 years old and I’ve had 10 family members to die in the last decade — folks who are responsible for helping me get to where I’m at today,” Johnson says. “So when my white colleagues were investing in retirement properties and horse farms, I was putting a roof on my 97-year-old uncle’s house because he’s sitting with two pails in the middle of the living room.

“But there are some (Black seniors) who can afford to live in these communities,” he adds. “Why they’re not looking at them is the question.”

Johnson and some colleagues took a swing at answering that with a 2018 national study called “Race and Residence in Continuing Care Retirement Communities/Life Plan Communities.” They interviewed groups of Black residents who live in those communities and Black seniors who don’t. Some of the latter don’t want to.

“If I’m going to … have a reasonably healthy and happy retirement I’m not going to sit around and listen to people who spew racist remarks on a daily basis,” Johnson says. “That was the biggest kind of response that we got. I’ve lived this every day in my working life. I’m not going to live it in retirement.”

On the flip side, Black study participants who were current and soon-to-be retirement community residents “were seemingly un-phased by the lack of diversity,” according to the study.

Seniors who are affluent enough to afford such communities are typically those who are already used to being ““first of” — be it in school or their careers, Johnson says. Still, “race fatigue” is real, he adds.

One Black resident of a retirement community resident interviewed for the study said she was frustrated by being asked to join the diversity committee with the assumption she could automatically speak for her race. Others were asked to be photographed for marketing materials before they even moved in.

“I need to know that you’re not going to wear the hell out of me taking my picture for every magazine,” Johnson says. “I need to be able to go and sit down with my wife and eat my hamburger without 10 people coming up and saying, ‘Oh, y’all are so cute.’ ”

The study notes that results may indicate support for increasing marketing efforts to Hispanic populations located in the same vicinity as retirement communities. However, Love says he wonders if there was some sampling error — perhaps related to the geographic locations from which Hispanic respondents were pulled.

Love says time will make a difference. The average age of someone entering a retirement community today is 80, he says. For Blacks born in 1940, who reached adulthood before the civil rights movement of the ’60s, there may be reluctance to be the first person of color to move into a community, he says.

Now consider those born in 1960, who are now 60 and considering retirement.

“They really came of age after all the civil rights stuff. Not a perfect world by any stretch of the imagination, but at a place that was so different from 1940,” Love says. “If you’re thinking of the people who are affluent enough to be able to afford a life plan community, they’ve been much more integrated and it’s not as a big of a deal.

“Maybe I should say I hope, but I believe, that over time it will naturally change and evolve as the generations change,” Love adds. “But I wish there was some way we could have it move faster.”

For nine minutes last Friday, about 80 Landis Homes residents stood in silence in honor of G…

Is the open floor plan on its last legs? Not in Lancaster County

It’s a question that’s been posed every so often for years.

A medical tsunami struck Marian Martenas’s parents about 10 years ago. First, her father suffered a stroke, followed by her mother’s heart att…

At the height of the COVID-19 pandemic, residents of Landis Homes would line a roadway into the Lititz campus on Friday afternoons, cheering o…

According to Islamic teaching, fasting through daylight hours during the month of Ramadan, which ends tonight, brings Muslims closer to God.

Year-round, throughout Lancaster County grow millions of plants destined for gardens and vases around the country.

Earlier this month, Natalia Latsios listed a two-bedroom condo at 6 p.m. on a Sunday night.

With its elegant clubhouse, landscaping, customized home plans, walking trails, and sense of community, Traditions of America in Lititz is an …

Lancaster man is putting sweat equity into his new city home, made possible by Habitat for Humanity's Faith Build program

Even when Denny Valerio’s work week is through, the hard work continues.