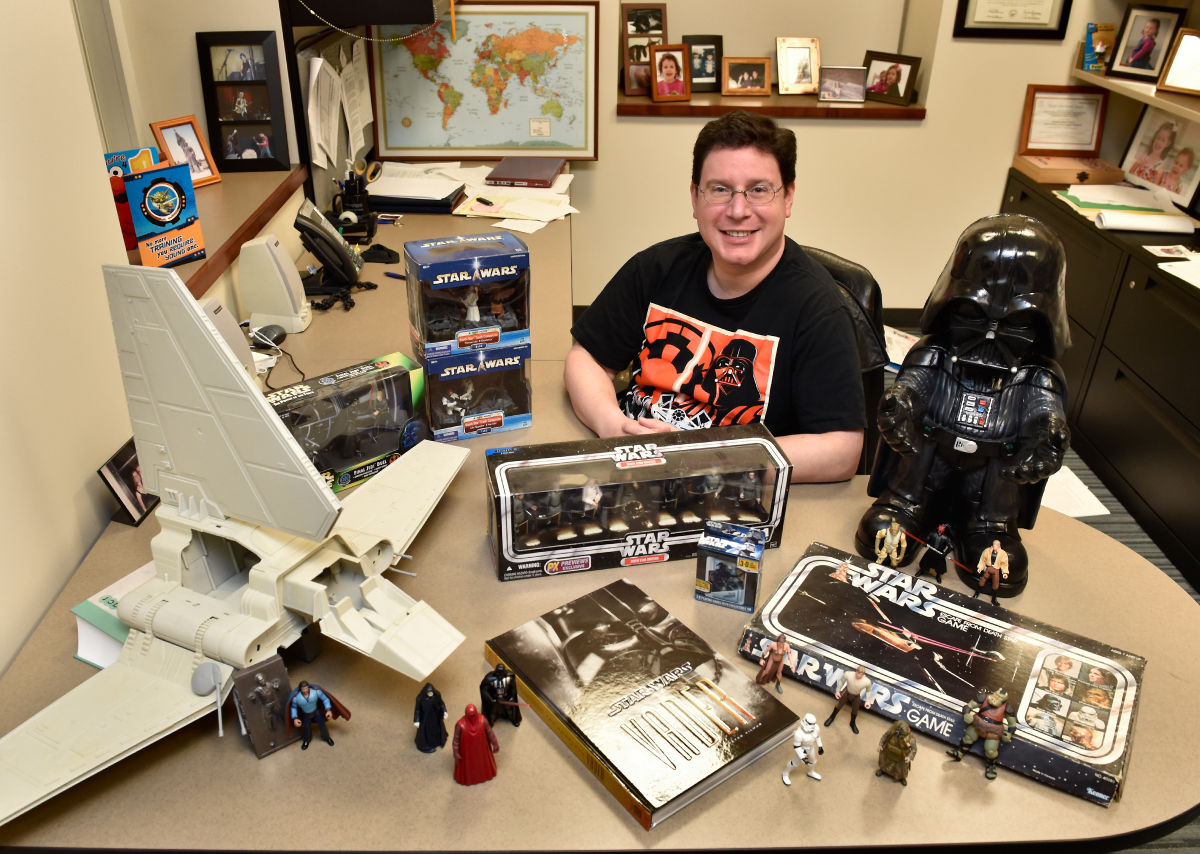 F&M Professor Jeffrey Podoshen with his Star Wars collection. "'Star Wars' is our ability to live out a fantasy."

F&M Professor Jeffrey Podoshen with his Star Wars collection. "'Star Wars' is our ability to live out a fantasy."

May the Force be with you.

When “Star Wars: The Force Awakens” debuts next week, it will attract millions of converts — not only to the “Star Wars” epic, but to what some see as a religion.

The spiritual aspect of the films — this is the seventh Star Wars film and the first of the final trilogy — is hard to mistake. The movies are filled with good versus evil, light versus darkness, and the mysticism surrounding the Force.

In a 1999 interview in Time Magazine, “Star Wars” originator George Lucas acknowledged his intent to create a guiding principle.

“I put the Force into the movie in order to try to awaken a certain kind of spirituality in young people — more a belief in God than a belief in any particular religious system.”

In 2001, more than 390,000 people in the United Kingdom listed themselves as Jedi. Many assumed that to be atheists’ “Star Wars” joke. But for some the Force is strong and has spawned religious organizations.

For example, the Temple of the Jedi Order: First International Church of Jediism, based in Beaumont, Texas, is recognized as an nonprofit, tax-exempt, international ministry. Its followers believe in the Force, which they contend is the “underlying fundamental nature of the universe.”

But is the Force truly a religion, or is going to the movies simply a religious experience?

“The Force was a catch-all for religion and spirituality,” says Richard Newton, assistant professor of religious studies at Elizabethtown College.

Lucas, who was heavily influenced by mythologist Joseph Campbell (see “The Power of Myth,” Page B2), mixed aspects of Eastern religion with his own Protestant upbringing.

Darth Vader and the Empire are on the Dark Side. Speaking of Vader’s attempt to entice young Luke Skywalker to join him, Newton notes how the line in the Lord’s Prayer, “lead us not into temptation” fits the storyline.

But even if the film’s message is about doing what’s right, does that make it a religion?

Religion is defined as a particular system of faith and worship.

“For a certain subculture, it’s the message — good versus evil; dark versus light. If (adherents) are following it as a moral compass ... I could be talking about a lot of religions. Who are we to say that’s not legitimate?” he asks.

Victor Capecce, associate professor of communications and theater at Millersville University, says what makes the “Star Wars” franchise unique is that parents, who became enthralled with the films when they were younger, “introduce their children to ‘Star Wars’ as well. They’re passing down a culture.”

“All storytelling by nature is a religious experience,” Capecce says. “Film is theater as a medium. You suspend your belief. We know that is Mark Hamill (on the screen), but we also know that is Luke Skywalker.

“When an audience gathers to see a film, they’re creating a community identical to a religious congregation, buying in as a unified group.”

Jeffrey Podoshen, associate professor of marketing at Franklin &Marshall College, shares that view. “When you go to the movie,” he says, “it has a major effect on you. Sometimes you want it to be real. The reality of life is not exactly what we want it to be.”

Newton says movies are a good reflection on religion and society. “I tend to think of it as, ‘What does “Star Wars” show us about religion?’ ”

People who have seen “Star Wars” at the theater or caught bits and pieces on TV may become engulfed in that culture. And, he asks, “Isn’t that how religion works in America?”

Podoshen, who has a collection of “Star Wars” characters, says the film is just that: a film.

“ ‘Star Wars’ is our ability to live a fantasy,” he says. “Some people take it too far. There are a lot of holes in Jediism,” and those who follow it as a religion “will be gravely disappointed.”

Even those with only a passing interest in the “Star Wars” filmography have opinions about its use of religious symbolism.

“I think (Lucas) based the Jedi on the Jesuits,” he says. “They wear dark robes, they protected the Holy Father.

“It seems to make sense to me.”