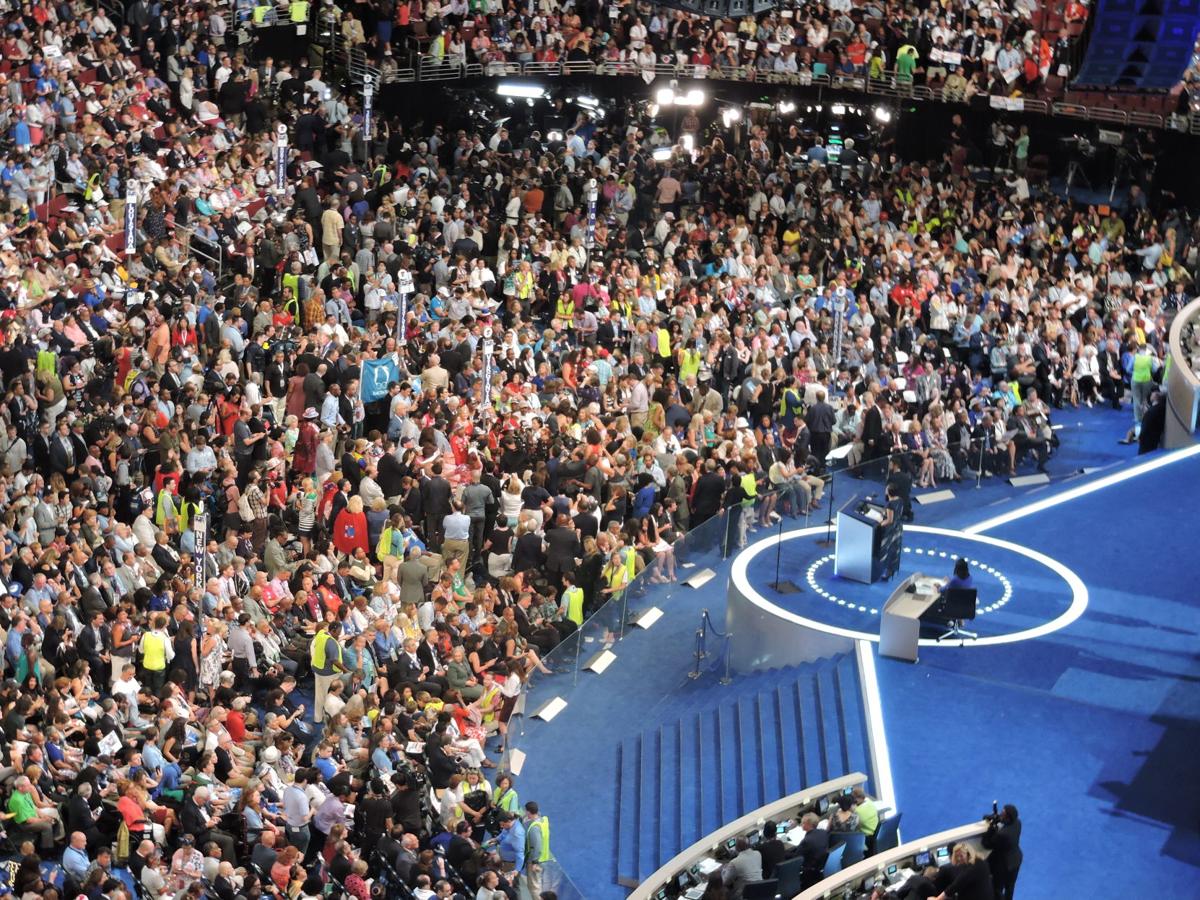 View from above the floor at the Democratic National Convention. 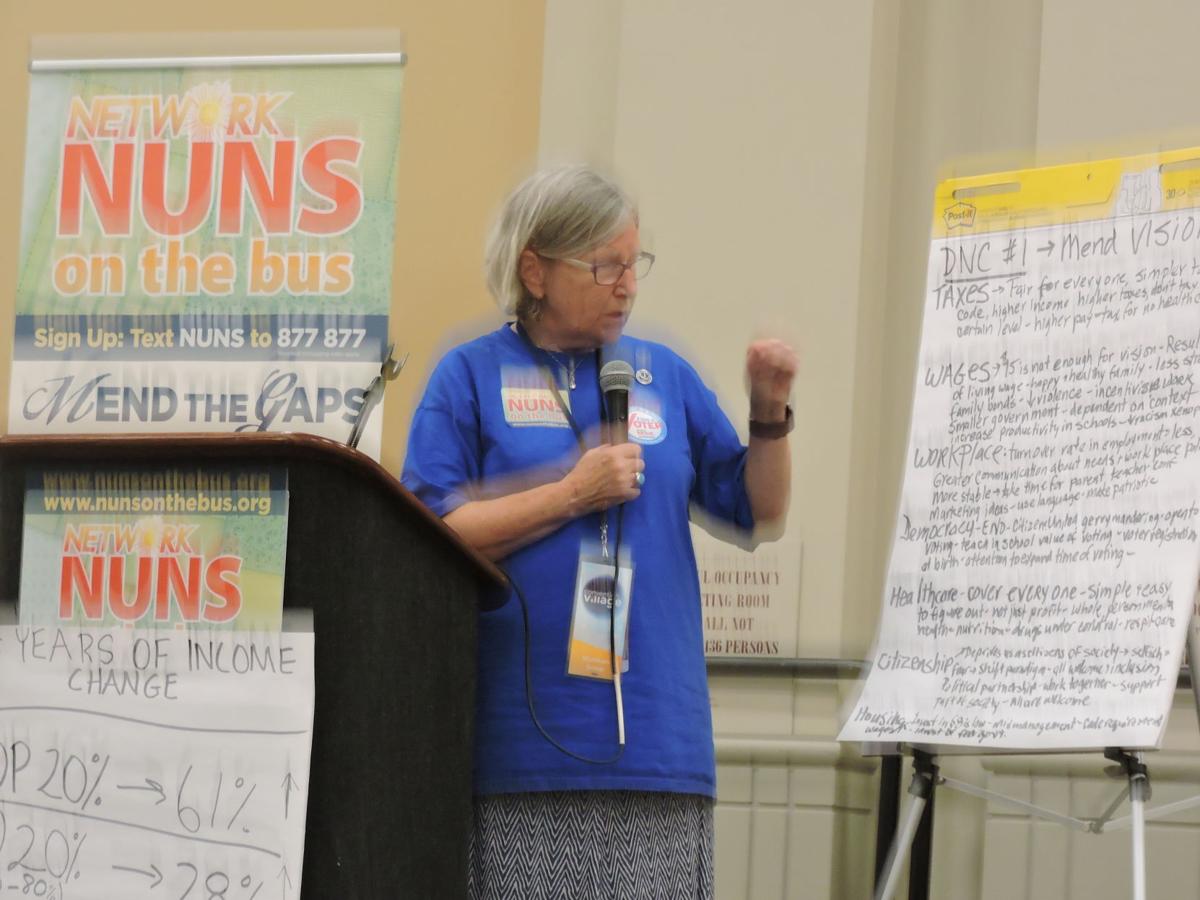 A member of Nuns on the Bus speaks at a gathering in Philadelphia during the Democratic National Convention.

View from above the floor at the Democratic National Convention.

A member of Nuns on the Bus speaks at a gathering in Philadelphia during the Democratic National Convention.

Debate rages online and off among visitors, natives, and the merely curious as to whether it’s  a hotbed of crime,   the best (or worst) place to get cheesesteak with a side of xenophobia,   or a breeding ground for the most mean-spirited, churlish, loudest, and flat-out vicious sports “fans’ in the country (or maybe the entire galaxy).  And let’s not even talk about the home sports teams, who continue to leave a trail of broken hearts behind them.

In advance of the Democratic National Convention, which wrapped up here on July 28,  delegates,  local officials and party bigwigs fretted about managing the expense, the weather, which promised to be steamy,  and the inevitable protests.

Yes, the mercury challenged the 100 mark a few times, there were protests (First Amendment, anyone?), and some reporters moaned about the lack of air conditioning and more Spartan workplace conditions, comparing them unfavorably to their swankier digs in Cleveland, where the Republican Convention took place.

As someone who generally writes about religion rather than politics, my perspective on what was meant to be primarily a show of Democratic party unity, political theater and legislative clout was clearly limited.  But in spite of the sometime unpredictable regional rail performance (the Southeastern Pennsylvania Transportation Authority is down more than a few trains) and the very predictable traffic jams on routes 76 and 95, the city managed this historic gathering like the Class A town it is.

Here were a few high points from this memorable week.

The interfaith service held at the city’s Convention Center was a joy-filled affair with the exuberant spirit and harmonies of an African-American worship service.  Invoking the Hebrew prophet Isaiah (those from among you will rebuild the ancient ruin…and you will be called the repairer of the breach) Leah Daughtry, an ordained minister who served as chief executive officer for the Convention, urged worshippers to respect their differences while celebrating what they had in common.  After a program which featured adults and teens sharing scriptures from many different religious traditions as well as Gospel music James Forbes, the famed preacher who is pastor emeritus of New York’s Riverside Church,  drew on material as diverse as the musical “The Music Man” and the Hebrew Scriptures to make his point: when America faces troubles, everybody has to pick up their own musical instrument and join in:, “I got good news, it’s going to be a band, everyone will have a part to play.”

Unbowed and full of energy after a 13-state, 23-city tour (they were in Cleveland for the Republican Convention, the  “Nuns on the Bus” shared their social justice message to Philadelphia, offering round-table workshops about mending income disparities and social divisions.  Clad in their distinctive blue shirts, they also took to the streets to offer weary office workers and Market Street shoppers a cold cup of lemonade.  “Everyone was friendly” said one. “Some of them recognized us and were happy to see us.”  As she queued up for a deli sandwich, said another sister, the young woman waiting on her blurted out” “I love you guys.”   These comments were echoed by other sisters, who praised the warmth and hopefulness of area residents.  Philadelphia – the city that loves you back. What a concept!

Though he made no pretense of being a conventionally religious man, Vermont Senator Bernie Sanders was a class act throughout the Convention, embodying both forgiveness and grace.  The happy recipient of someone else’s credentials on Tuesday evening, I was fortunate enough to hear him move to nominate Hillary Clinton by acclamation, a remarkable moment indeed.

The Philadelphia police were awesome, friendly and helpful. Though there were representatives from countless other agencies here, the local cops bore the major burden of keeping the city safe.  The protestors were respectful but passionate, though some of them were clearly frustrated and disappointed on numerous counts. Only one demonstration resulted in citations, according to Police Department reports, a credit both to a well-prepared city and demonstrators who respected the guidelines.

Though Democrats are often viewed as the party of the increasingly secular left, faith permeated the proceedings.  Listen to Vice-Presidential candidate Tim Kaine talk about his Catholic faith in his Convention address here.   Watch  progressive activist Rev. William Barber,  president of the North Carolina NAACP, bring the crowd to its feet in this speech.    Remember the Mothers of the Movement, and strength that draws upon deep-rooted belief in the face of tragedy. That’s not to mention the numerous invocations and benedictions given by people of many faiths, or the personal conversations taking place in hallways hotel rooms and restaurants.  Though the ranks of the religiously unaffiliated are growing, reports of God’s demise among Democrats are simply not accurate.

Whatever your party affiliation, or the result of the November elections,  it was truly a remarkable week for the city, the region, and the history books.  Let’s hope real life remains just as stellar as us at our near-best. Philadelphia, you’ve given all of us reasons to believe.