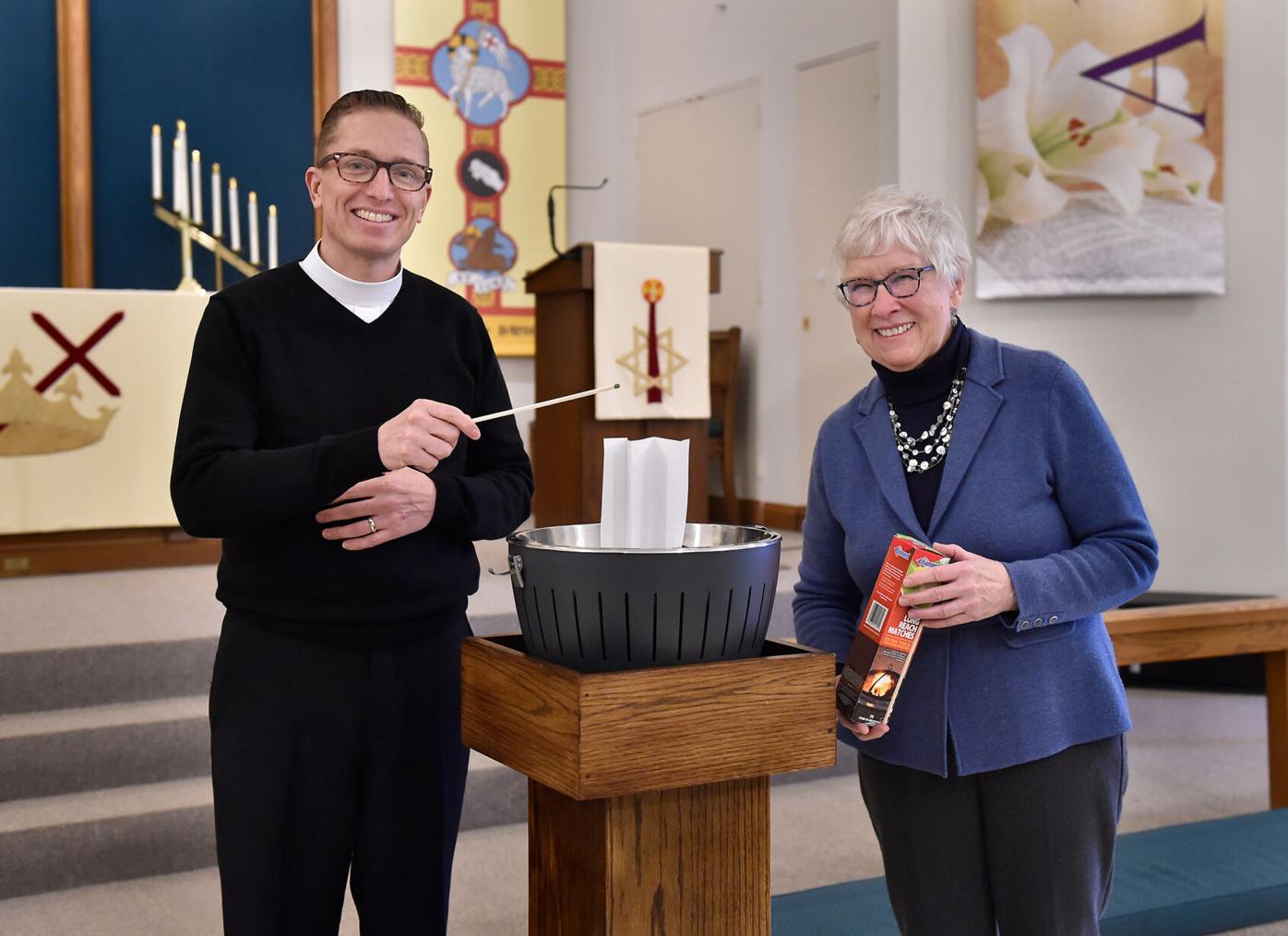 Rev. Christopher Seifferlein and longtime church member, Nancy Marshall of Mount Calvary Evangelical Lutheran Church, are pictured with a paper that represents the church's upcoming mortgage burning ceremony, after paying off their mortgage on Friday, April 23, 2021. 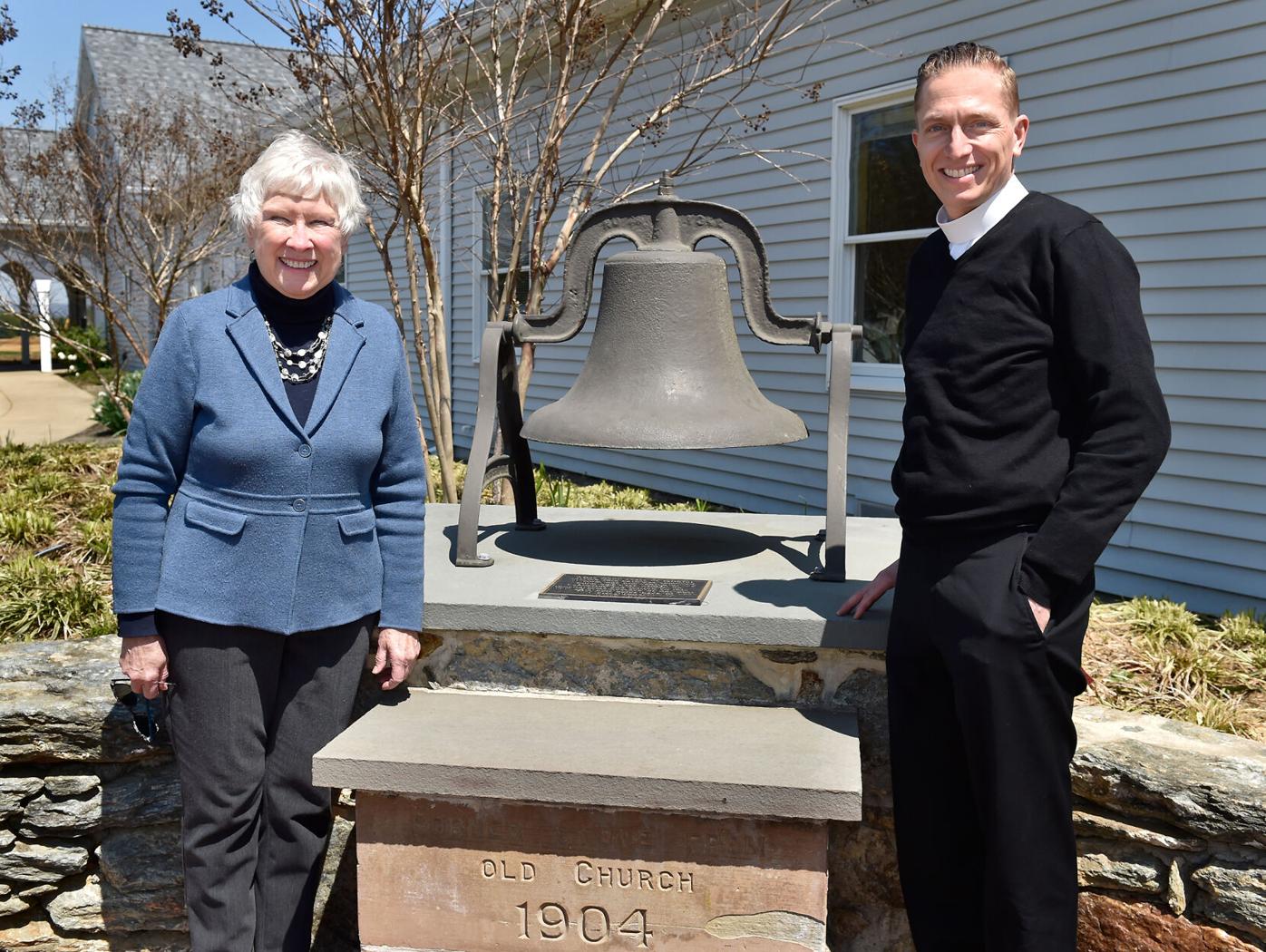 Rev. Christopher Seifferlein, right, and longtime church member Nancy Marshall of Mount Calvary Evangelical Lutheran Church, are pictured with an old church bell that once was atop their church when it was located in Lancaster city many years ago on Friday, April 23, 2021. 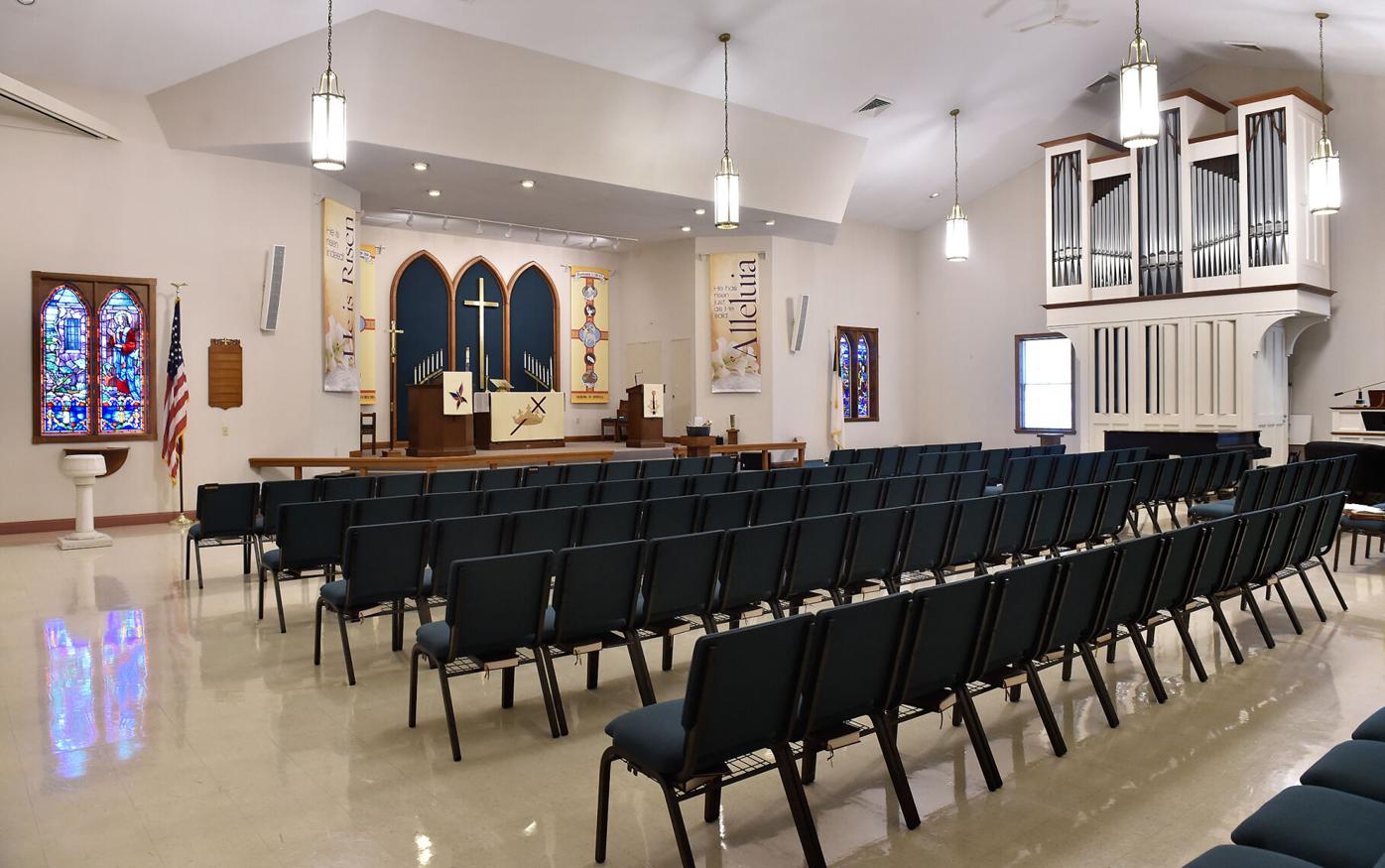 The sanctuary of Mount Calvary Evangelical Lutheran Church, is pictured where the church will hold an upcoming mortgage burning ceremony after paying off their mortgage on Friday, April 23, 2021. 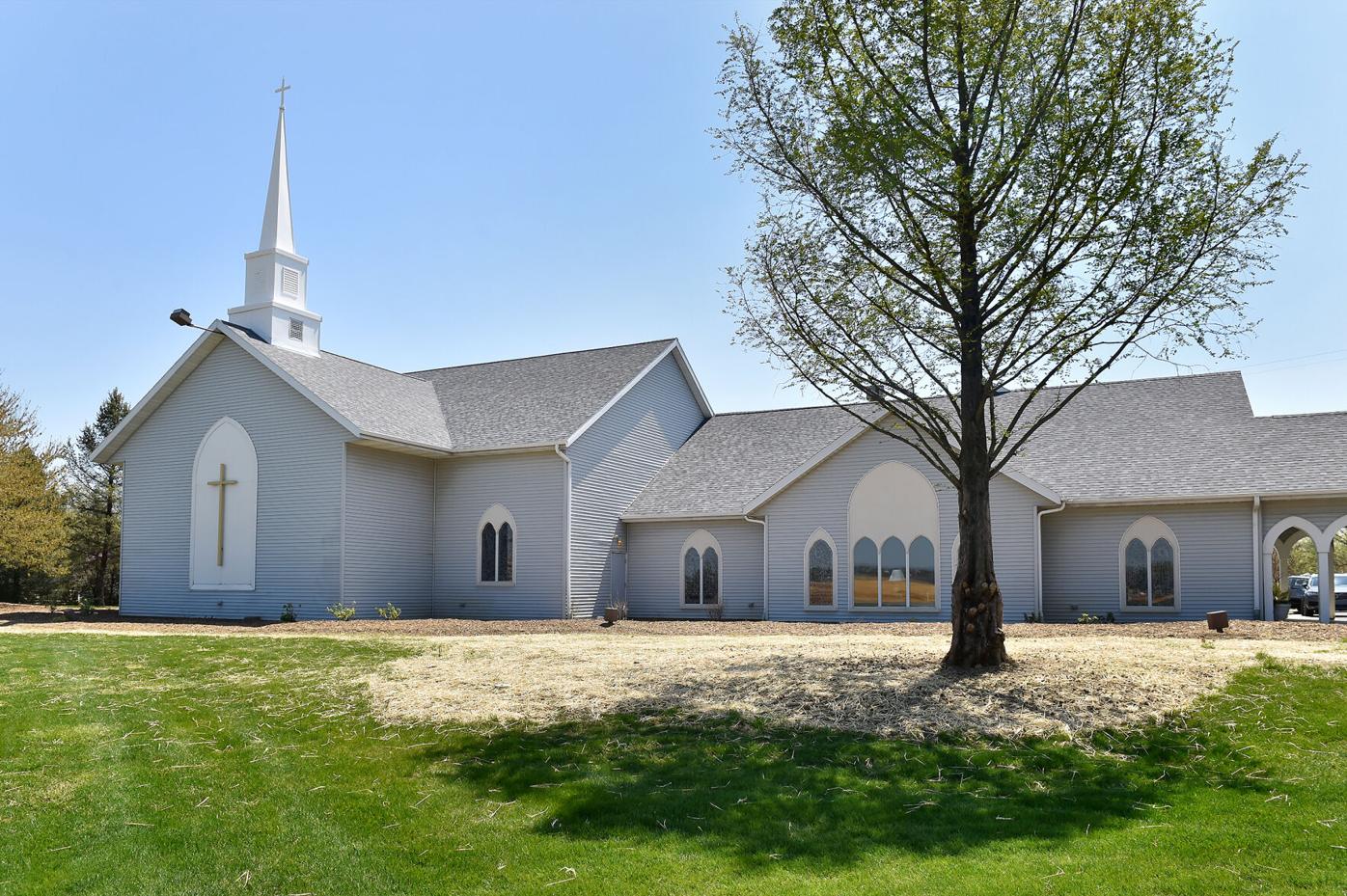 The exterior of Mount Calvary Evangelical Lutheran Church is pictured. The church started in Lancaster city many years ago and will hold an upcoming mortgage burning ceremony after paying off their mortgage on Friday, April 23, 2021. 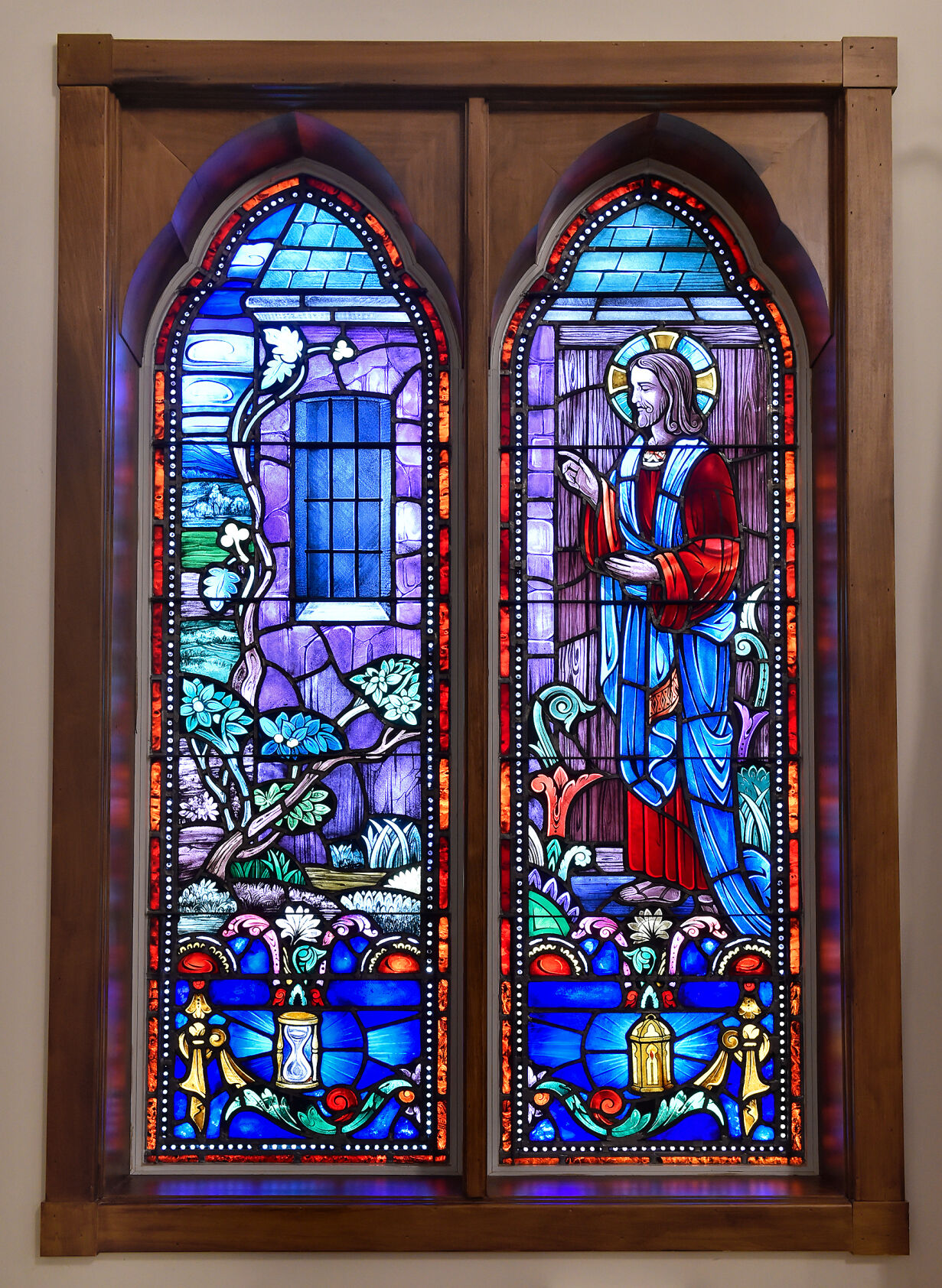 One of the stained glass windows is pictured in the sanctuary of Mount Calvary Evangelical Lutheran Church. The church will hold a ceremony to burn their mortgage after paying off their debt on Friday, April 23, 2021.

Rev. Christopher Seifferlein and longtime church member, Nancy Marshall of Mount Calvary Evangelical Lutheran Church, are pictured with a paper that represents the church's upcoming mortgage burning ceremony, after paying off their mortgage on Friday, April 23, 2021.

The exterior of Mount Calvary Evangelical Lutheran Church is pictured. The church started in Lancaster city many years ago and will hold an upcoming mortgage burning ceremony after paying off their mortgage on Friday, April 23, 2021.

One of the stained glass windows is pictured in the sanctuary of Mount Calvary Evangelical Lutheran Church. The church will hold a ceremony to burn their mortgage after paying off their debt on Friday, April 23, 2021.

It’s not every day that a church makes an event out of burning important paperwork.

But after 28 years of paying off its mortgage, Mount Calvary Evangelical Lutheran Church in Manheim Township has cause for celebration. The church will host a Mortgage Burning Celebration on Sunday morning for its congregation.

“There is a quiet excitement as we reflect upon the commitment of past members who gave their time and money to build God’s house and look forward to the future,” says Nancy Marshall, event and board of education chair.

The Rev. Christopher Seifferlein, pastor of the church, expresses admiration for parishioners who gave generously and rose to the challenge that predates his arrival at the church. For decades, in addition to their regular weekly offering, members used a special envelope to give monthly toward paying off the mortgage.

“It’s humbling that while as a pastor, I stand joyously at the finish line. It was the hard work of those who came before me for this momentous occasion,” Seifferlein says.

Mount Calvary Evangelical Lutheran Church purchased 7.1 acres on Petersburg Road in Manheim Township in March 1988. The land, which cost $278,000, was paid for in cash. The building’s construction was funded with a 20-year $738,000 mortgage in 1993 through the Lutheran Church Extension Fund. Previously, the church was located at Plum and Clay streets in Lancaster.

Groundbreaking for the 13,400-square foot one story building took place March 21, 1993. Laborers for Christ, a former ministry of the LCEF, built the church. The laborers were a group of dedicated Christian men and women who volunteered some of their retirement to work for Lutheran Church Missouri-Synod ministries. For eight months, spring through fall, these skilled volunteers from around the country parked their RVs at the worksite where they lived and toiled until the project was done.

Church members joined the workers with grateful hearts and helping hands. Those unable to do physical labor provided snacks or cleaned up the worksite each evening for the next day’s work.

“Before the drywall was done and carpeting laid in the chancel, members wrote Bible verses on the wood studs and flooring to give praise to God for past and current members who were motivated to plan, give and build the new church,” Marshall says.

Construction was completed in November 1993 and the new building was dedicated on Dec. 5, 1993. Six stained glass windows were moved from the former church building and installed in the new sanctuary. The building housed offices, classrooms, nursery, kitchen and restrooms.

The church hosted several fundraising campaigns throughout the years to aid in paying the mortgage, including two Venture Forward in Faith campaigns: the first chaired by Harry Shaub and the second by Ron Marshall, both deceased. Their efforts were followed by a Growing in Faith fundraiser when the building was complete, which raised $392,138.

“It was a big achievement. Sadly, people who worked so hard on fundraising like Ron passed on before seeing the mortgage paid off,” says Farley Fry, a 21-year member who serves on the event committee.

He commends Marshall on her leadership of the six-member committee that also includes Sheila Ginder, Barry Walton, Kenny Holton and Seifferlein. Past clergy, former members, architects and others involved in the original building design have been invited to the celebration. The event begins at 9 a.m. with a PowerPoint presentation created by Holton, which chronicles Mount Calvary’s history.

At 9:30 a.m., a Service of Praise and Thanksgiving to God will feature Sunday school children who will sing “We are the Church” and a song written by Linda Myers, “Venture Forward in Faith.” Myers is a former member whose ancestors were charter church members.

The mortgage will be burned safely in a brazier. Those participating in the mortgage burning are: Rod Stiegler, congregation chair who will ignite the document; Barry Walton, head trustee; Marilyn Taylor, former member; Marv Trim, past treasurer; Allan Morehead, past chairman; Seifferlein and Marshall. Refreshments will be available while attendees hear comments from those involved in the building project. Memorabilia like an old church bell, a 1930s child’s chair, a 1911 Baptismal Certificate and more will be on display.

As the church celebrates its past, its members also look ahead to the future with a relatively new pastor.

With the pandemic, Seifferlein saw an increase in people needing pastoral care. He says his shut-in list quadrupled for those needing visitation and home communion.

“It’s been a wonderful challenge and joy to use my pastorate to bring true balm and restoration to hurting souls,” Seifferlein says.

Though in-person worship stopped in March 2020, Seifferlein says he feels fortunate to have learned to know congregants before COVID-19 closed the church doors. Audio services became and remain available through the church’s YouTube channel. In May 2020, in-person Sunday worship resumed with the church following CDC guidelines. An additional Wednesday night service helped to reduce people attending on Sunday.

A rector’s duty is to lead a parish and ensure the spiritual well-being of its congregants.

Ethan Dunnenberger never expected to find joy during a worldwide pandemic. But the Temple Un…

Wendell Metzler, the now-retired cop who befriended a criminal, leans on faith during cancer battle

It’s difficult for any police department to bid farewell to a retiring officer.

With the arrival of the COVID-19 vaccine, there has been a renewed sense of hope and a slight easing of anxiety. While we still have a long wa…

An Emmy Award-winning actor paid a visit to an East Petersburg brewpub on Saturday, the brewery’s co-owner said.

Jim Robertson hails from Scotland, where he worked as a medical technician for a hospital in Aberdeen.