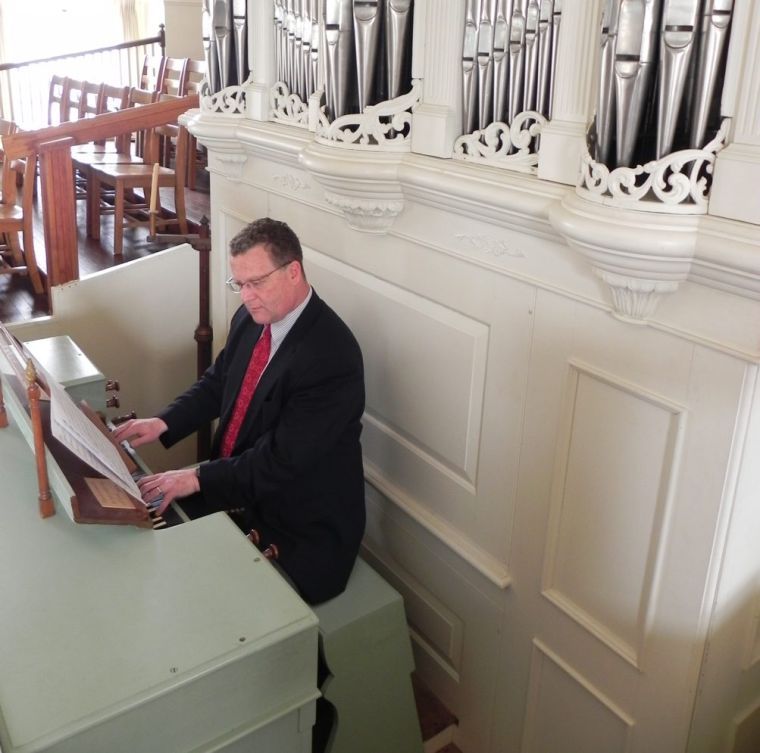 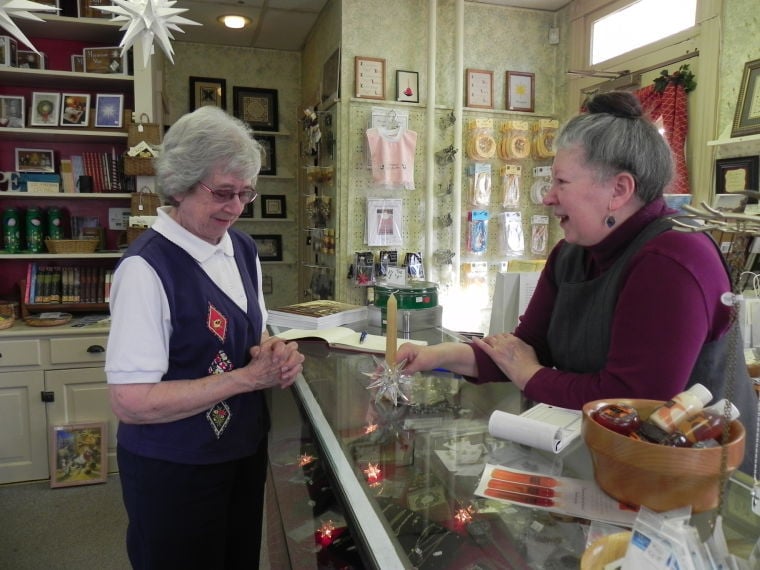 Marian Shatto holds a Moravian star for customer Darlene Bucher in the Moravian Mission Gift Shop on a Saturday afternoon in March. Shatto is a member of the Lititz Moravian Church choir, the handbell choir and is a former violinist who wrote “Singing Our Faith: Moravian Hymns Through the Seasons.” 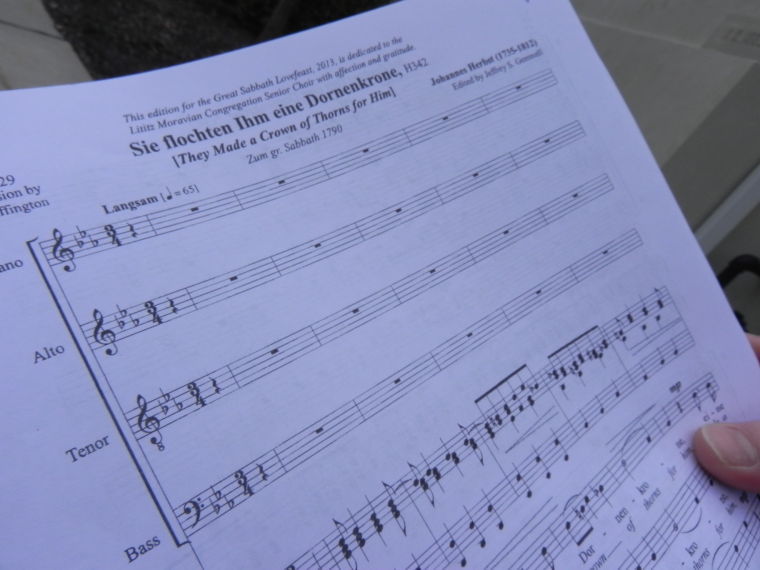 The music sheet shows the English and German score for “They Made For Him A Crown Of Thorns,” written for the Great Sabbath Lovefeast at the Lititz Moravian Church in 1790 and composed by Johannes Herbst and edited by Jeffrey Gemmell, director of music ministries at Lititz Moravian Church. 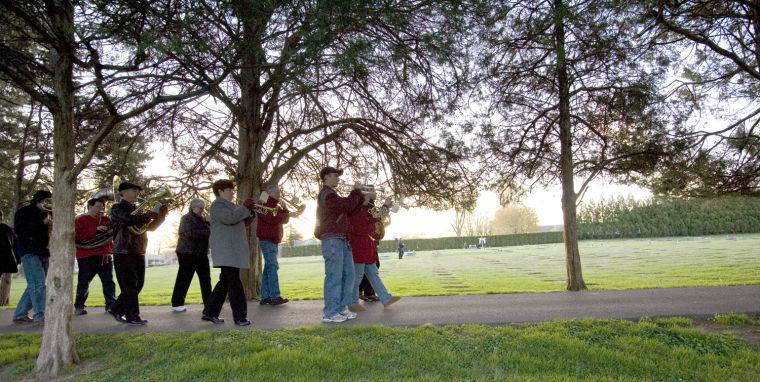 Marian Shatto holds a Moravian star for customer Darlene Bucher in the Moravian Mission Gift Shop on a Saturday afternoon in March. Shatto is a member of the Lititz Moravian Church choir, the handbell choir and is a former violinist who wrote “Singing Our Faith: Moravian Hymns Through the Seasons.”

The music sheet shows the English and German score for “They Made For Him A Crown Of Thorns,” written for the Great Sabbath Lovefeast at the Lititz Moravian Church in 1790 and composed by Johannes Herbst and edited by Jeffrey Gemmell, director of music ministries at Lititz Moravian Church.

A solemn service with an upbeat name that will include the playing of an anthem for the first time in more than 200 years will be held today in Lititz.

The Lititz Moravians call it the Great Sabbath. They celebrate it with a traditional service known as a lovefeast that includes a modest serving of buns with coffee or chocolate milk. Moravians hold lovefeasts throughout the year but Lititz' Great Sabbath event is uncommon.

"Not a lot of Moravian churches hold it anymore, so that makes the Lititz Moravian service rather unique," said Jeffrey Gemmell, director of music ministries. Gemmell will direct a choir that will sing an anthem composed by a former pastor of the church, Johannes Herbst.

But it's not just any old anthem from the composer's collection among hundreds he wrote. This particular one was written for the Lititz congregation to be played at its Great Sabbath Lovefeast in 1790 in the very same church standing on 8 Church Square in Lititz.

"They Made A Crown Of Thorns For Him" also was performed last year for the first time in centuries. Today, another of Herbst's anthems, "Upon The Full Spilling Of His Blood," will be premiered.

Gemmell has been editing Herbst's previously unpublished manuscripts to modernize them so they can be performed by choir and orchestra. In the past two years, he has completed 20 anthems. By next year, he will have revised 30 anthems, culminating his research project sponsored by the University of Colorado. Two publishing houses are interested in the works, he said.

Herbst immigrated to Lancaster in 1786 from Herrnhut, Germany, the seat of the Moravian faith after followers fled the Czech Republic upon the burning at the stake of its leader John Hus.

Herbst first settled in Lancaster, then became pastor in Lititz in 1791. Part of his job, it seems, was putting prayer to music.

"He was inspired by the text he was working with, which was usually a daily text chosen for a particular service," Gemmell explained. "He was a musical servant almost."

Coming after Good Friday and before Easter Sunday, parishioners say today's service is somber, akin to a funeral because Christ is not yet risen.

Marian Shatto said it's a transition day, "from the deep, deep grief and suffering of Good Friday to the joy of Easter Sunday morning."

Shatto believes Moravians sing their theology. She wrote the booklet "Singing Our Faith" and in it states, "Hymn singing was central to worship in the renewed Moravian Church in the 18th century."

And so it is today.

"Moravian music is built on the Singstunde (German for singing hour) a worship pattern developed in the 1720s and 1730s," Shatto said. "It's a series of hymns chosen by the pastor or worship leader that would, in a sequence, give the message of the day."

Lovefeast services are based on the Singstunde pattern, she said. The congregation sings hymns and the choir and orchestra perform anthems, each in turn.

"People are singing the whole time," Gemmell said. Yet, the service begins as it ends, in silence.

Congregants will return to the church before dawn on Easter Sunday. They will be escorted to the "God's Acre" section of the cemetery by the Trombone Choir. These musicians will have been up most of the night, traversing the town to announce the Risen Lord in the early morning hours.

Some musicians will lead the people; others will follow. They'll play their instruments antiphonally — the leaders will play a phrase; the musicians at the rear will answer.

Gemmell said such a procession evokes a feeling of connectedness to those lying in the cemetery, a feeling he also experiences while editing Herbst's music and playing it on the very same organ, a Tannenberg, that Herbst played.

"I feel like he's right there beside me," Gemmell said. "The church hasn't changed a whole lot since 1787. You can imagine him being in that place."

He chose this composer to study because on days like today he can perform it in the church the music was written for and it has meaning to the congregation. He also has come to appreciate the quality of the music.

Gemmell also serves as interim director of music at Millersville University and said unlike the Lititz Moravians whom you'd expect to love the hymns, the students also value Herbst's music.

"They really like singing the pieces because they like them musically and they recognize the quality of the composer," Gemmell said. "And they have that youthful energy and vibe."

"They Made A Crown Of Thorns For Him"