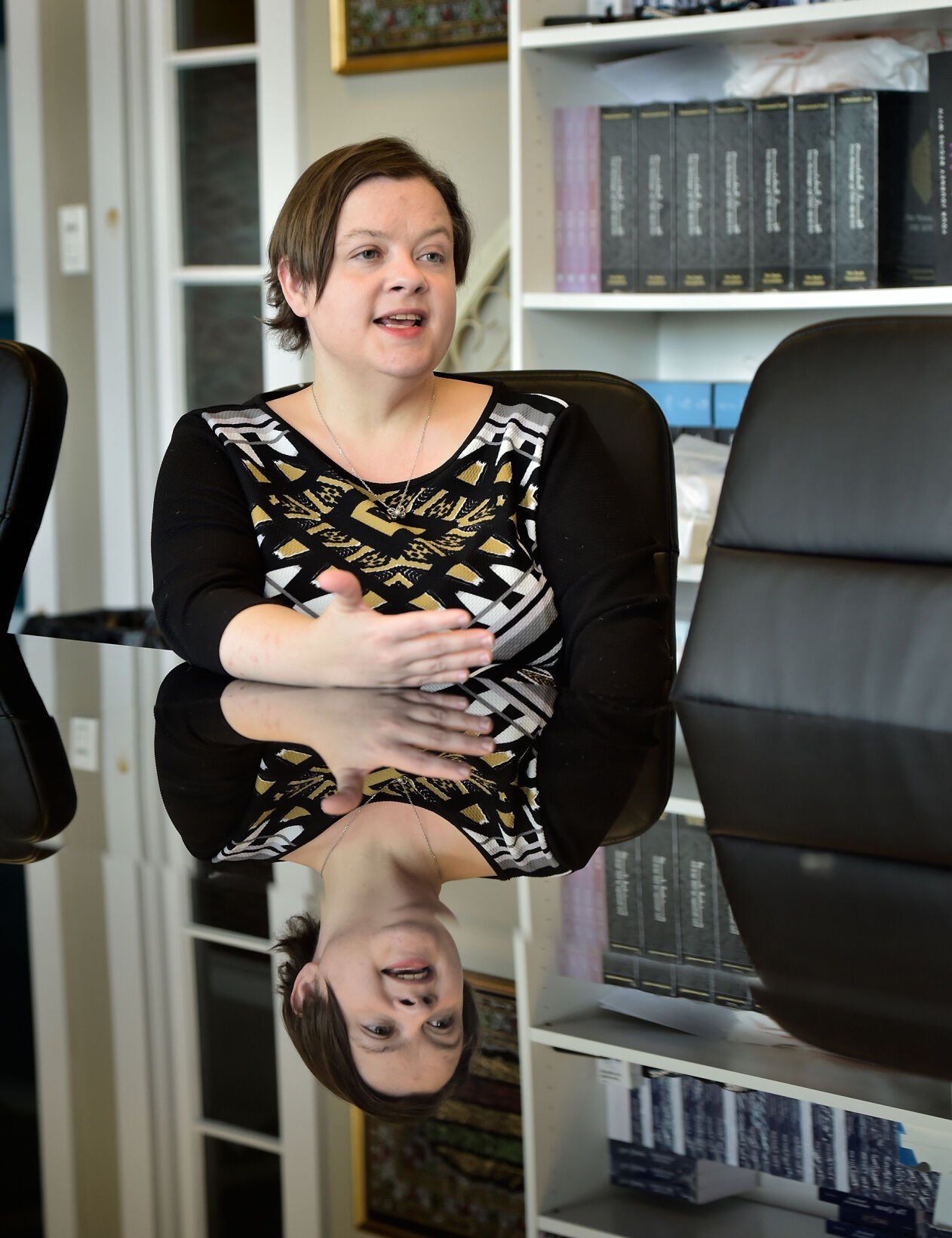 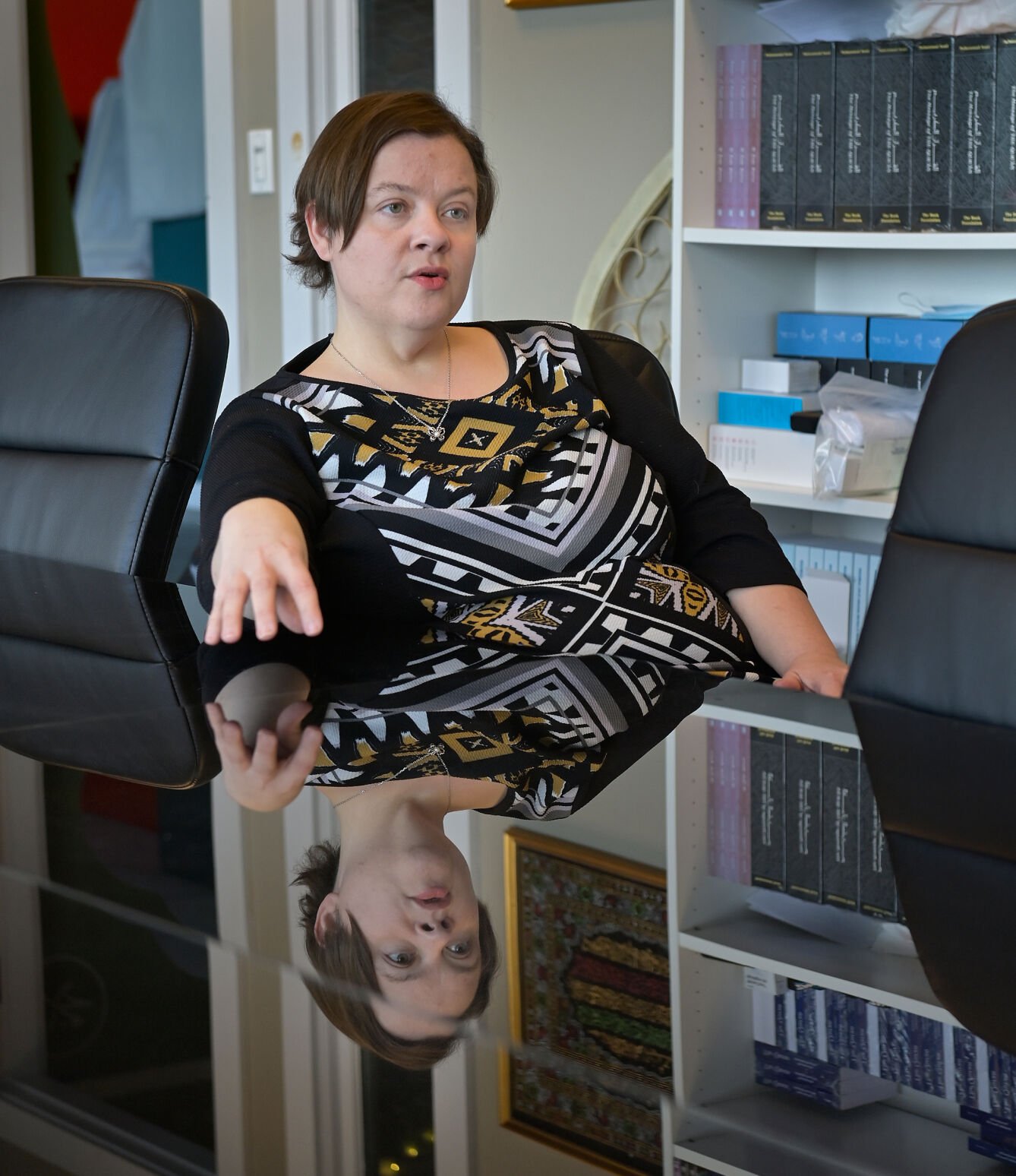 Rev. Mandy M. Mastros from the Moravian Center of Lancaster, talks about her new book, "Your Friendly Neighborhood Hope Shop" on Wednesday, Nov., 3, 2021. 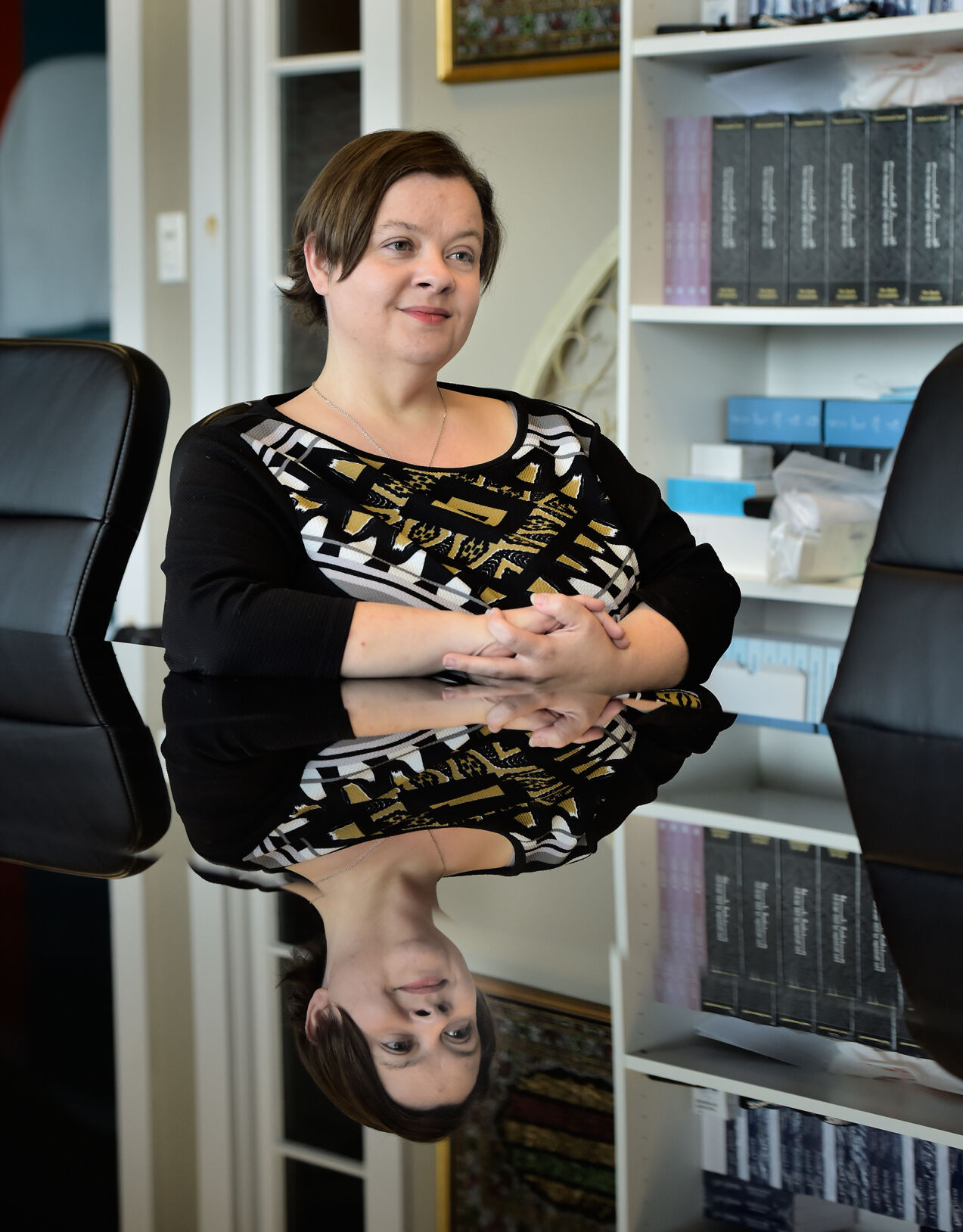 Rev. Mandy M. Mastros from the Moravian Center of Lancaster, talks about her new book, "Your Friendly Neighborhood Hope Shop" on Wednesday, Nov., 3, 2021.

One day in 2018, a homeless man stopped in at the Moravian Center of Lancaster, next to the bus terminal in the city, asking for a bus ticket so that he could visit his wife in the hospital.

He left with not only the ticket but also a “blessings bag” of snacks, socks and toiletries. On the way out the door he said, “Thanks for letting me shop at the hope shop.”

Thus was born “Your Friendly Neighborhood Hope Shop,” a book by the Rev. Mandy M. Mastros, who is pastor of the church at 227 N. Queen St., as well as a licensed social worker.

“It stuck,” Mastros said. “The stories are really about resilience, hope, people working together in the community to overcome obstacles. We all have a combination of hopeful and discouraging experiences.”

The book, released in September, is an Advent devotional featuring 25 short stories about people on the streets of Lancaster with whom Mastros has worked on issues of homelessness, addiction, food insecurity and mental health since she became pastor of the church four years ago this month.

“My hope with the book is to give some humanity and some voice to people not often heard or seen,” Mastros said.

In the introduction, Mastros wrote how “deeply humbled and often in awe” she is by the vulnerability people openly share with her, including their hurts, mistakes, losses, struggles and hopes. At the end of each meeting, she always asks, “Are you a hug or a handshake type of person?”

She says the answer is usually a hug.

“Time and time again, that simple question opens the door to a deeper conversation, one that leads us into a relationship that goes beyond the need for a bus pass, a snack and some toiletries,” Mastros said. “I have learned to never underestimate the value of giving a person a safe space, a listening ear and an invitation to share his or her story.”

Each day in the devotional includes a scripture verse, story, reflection, ponderings and a prayer. The first day is about Juan, whose name has been changed in the book to protect his privacy, who greeted her on the street outside the church.

“He asked how I was doing,” she wrote in Juan’s story. “I responded and asked the same of him, and when I looked at him, he held my gaze a bit longer than normal. I knew he wanted to say something else, so I smiled at him and waited.”

In the reflection, she wrote, “By lingering for that extra moment, I gave him time to gather his courage to ask for help.”

Her prayer began, “Jesus, help us to look into the eyes of others in a way that sees what their lips are not saying.”

The book is for sale at the Moravian Mission Gift Shop at Lititz Moravian Church, 8 Church Square; Aaron’s Books, 35 E. Main St., Lititz; and on Amazon.

The author will sign books from 6:30-7:30 p.m. Nov. 19 in front of the church on Queen Street. The book signing is part of the Extraordinary Give event that will be held that night in Penn Square.

Another book signing will be held from 1-3 p.m. Dec. 4 at a modified version (due to COVID-19) of the annual Lititz Moravian Advent Lovefeast event. (The Advent Lovefest is known for a special sweet: Moravian sugar cake will be served with coffee and hot chocolate.)

A portion of the proceeds from the book sales will benefit Lanc Co MyHome, 620 N. Duke St., formerly the Coalition to End Homelessness.

“I sit on the board,” Mastros said. “One of the things I appreciate about the community is the number of entities that come together to provide care and services.”

Last December, the church began sharing its space with the Islamic Community Center of Lancaster, established in 2013 and formerly at 275 Hess Blvd.

“The partnership has been wonderful,” Mastros said. “We serve meals together and individuals together. They’ve shared about their faith with us.”

When Mastros was consecrated as a Presbyter, the Islamic Center offered a call to prayer and a reading from the Koran.

Mastros, who now resides in the church parish in Neffsville, was born and raised in Lancaster.

“I spent my first 13 years on West King Street across from McDonald’s,” she said.

A graduate of Hempfield High School, Mastros received her undergraduate degree online from the University of Phoenix, and master’s degrees in divinity and social work from the Moravian Theological Seminary, in Bethlehem, and Marywood University, in Scranton, in 2017. She is now enrolled in a four-year doctoral program at the Lancaster Theological Seminary.

“I use both sets of skills in my ministry here,” she said.

The bestselling author's latest book is out this week.

This story was updated Nov. 16.

Emerson, Lake & Palmer played at F&M in 1972; a local man has the only recording in existence of the show

A king-size “Twinkling Star” quilt will be raffled to benefit mission and service projects of the church. Tickets are $10 each or three for $25.

For more information, call the church office at 717-397-9722 or email pastor@lancastermoravian.org.

Lancaster Moravian Church was founded in 1746 at 30 W. Orange St. When the building had to be torn down in 1967 due to termites, the congregation moved to 1460 Eden Road, now Harvest Bible Church, then to Queen Street in 2014, where worship is held at 10 a.m. Sundays.

In 2015, the church, now with about 40 worshippers, added the adult day care center, open from 7:30 a.m. to 5:30 p.m. Monday to Friday. Before the pandemic, the center served about 45 seniors. It now serves about 20 due to social distancing.

Earlier in the pandemic, as long as it was above 45 degrees, the congregation brought lawn chairs and worshipped in the parking lot of Nicholas and Hohenadel LLP across the street.

“We were so grateful to them,” Mastros said. “It allowed us to continue to worship, and we also connected with people on the street. Reaching out to the community in that way is a big part of our mission.”

In August, the congregation moved back inside, with services both in person and on Zoom.

When entertainment draws crowd, crush of humanity can be terrifying [Unscripted column]

I’ve never been one to go to rock concerts anyone would assume would get wild, even when I was a young adult. My musical tastes have led me to…

Every deer hunt, harvest offers its own story [I Know a Story column]

In 50-plus years of hunting Pennsylvania white-tails, I’ve harvested seven bucks — eight, if you include the button buck I harvested during an…

Want to give back this holiday season? Here are 10 ways to help

The holiday season is a time for giving. And for many people that means giving more than just presents to friends, family and coworkers, but g…

The online radio “Old-Fashioned Revival” will return in December.

Peacemaking and nonviolence have been hallmarks of Lancaster Friends Quaker Meeting and Lancaster Interchurch Peace Witness. The two local gro…