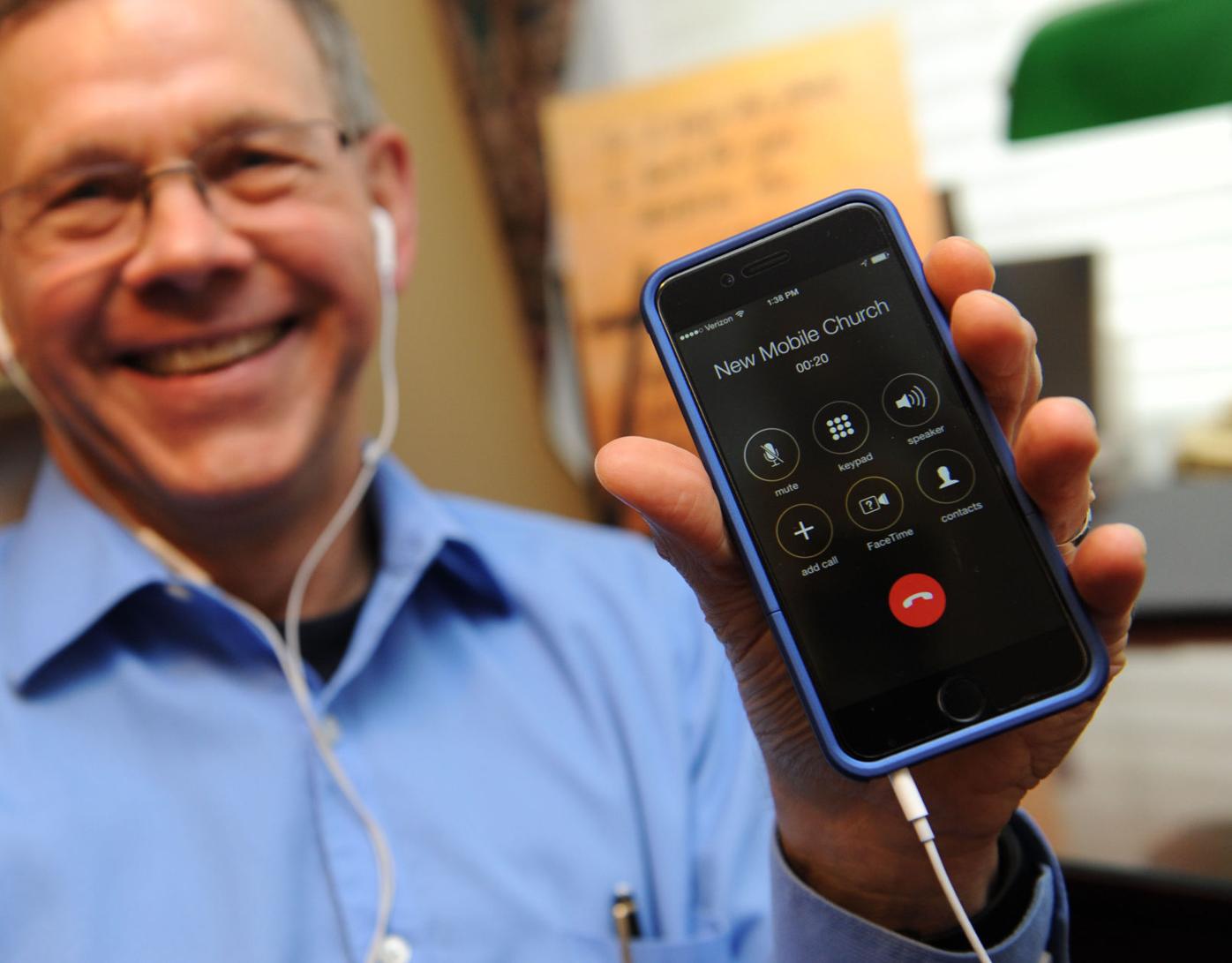 Rev. Charles Gross explains how to access his First Mobile Church at his home in East Hempfield Township. 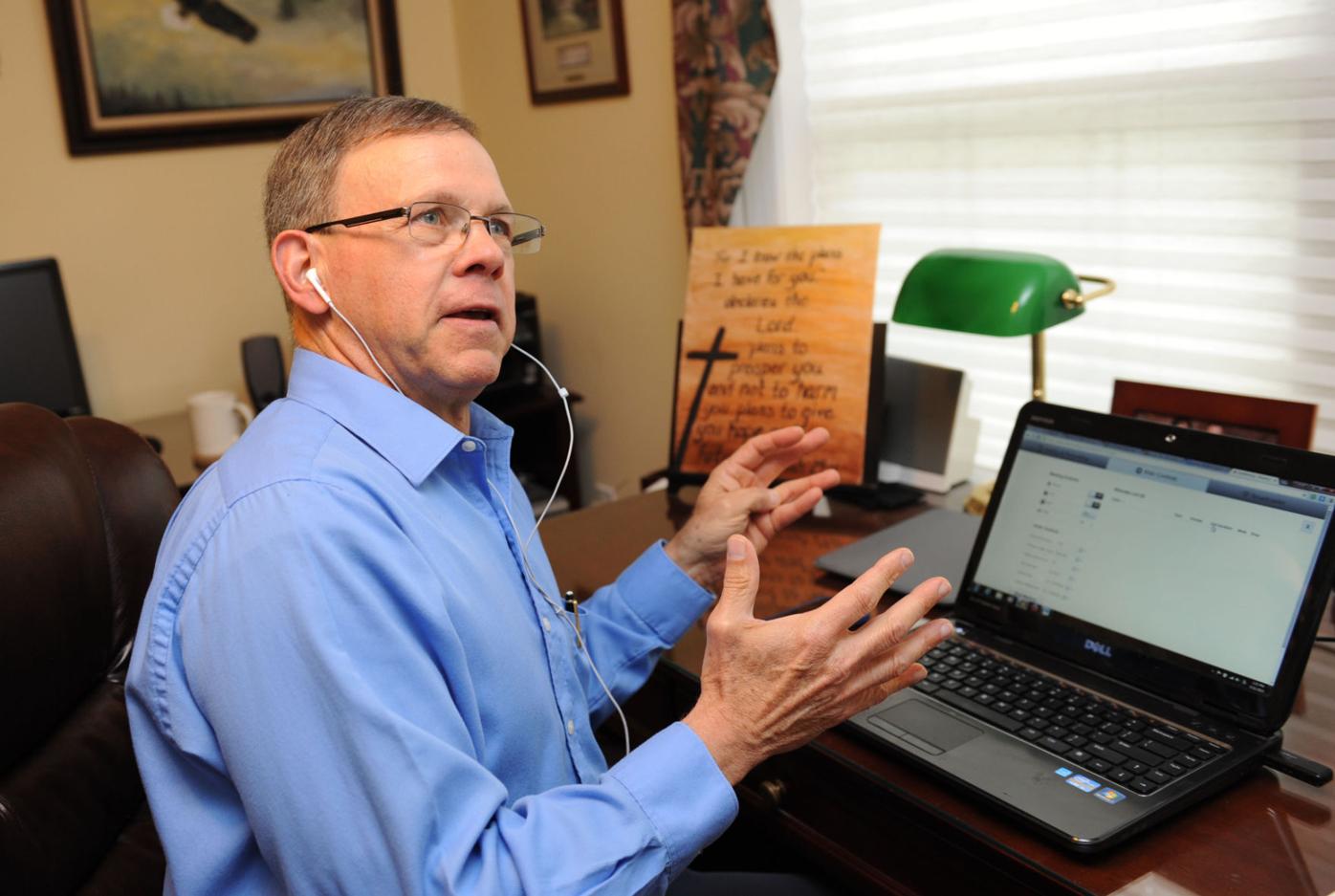 Rev. Charles Gross at his computer as he prepares a sermon for his cell-phone church service.

Rev. Charles Gross explains how to access his First Mobile Church at his home in East Hempfield Township.

Rev. Charles Gross at his computer as he prepares a sermon for his cell-phone church service.

The Rev. Charlie Gross holds two services on Sunday mornings. The  traditional service is at 10:45.

His 9 a.m. contemporary service, however, is truly unique. The congregation may be dressed in suits or casual clothes or even pajamas. They may be sipping coffee or, perhaps, a Bloody Mary.

If that sounds unusual, consider this: Gross, the pastor  of  West Grove Presbyterian Church in Chester County, cannot be seen. He is preaching from his church office using a laptop computer and a cell phone. His congregation is listening to him on their cell phones.

Gross, who lives in East Hempfield Township, is the founder of FirstMobileChurch.org  — a cell-phone church service he has hosted every Sunday since Nov. 24, 2013.

It is believed to be the first — and thus far only — cell-phone church service in existence.

Gross stumbled upon the idea while walking his son's dog. He wanted to find a way to connect active people to church services. He was looking for a common link. Then it hit him: Everybody has a cell phone.

“There were five callers — basically my family,” he said.

Seventy-nine services later, it now averages 20.47 callers. That, Gross said, translates to roughly 30 listeners because some of the listeners use speaker phones which allow more than one person to participate.

Because it is an interactive audio service, people can chat with one another while they wait for the service to begin — as if they were sitting  in church pews. And Gross can now identify most of their voices.

One of the most touching parts of FirstMobileChurch.org for Gross is that two sisters, who live hundreds of miles apart, are regular participants.

“Jane, from Nottingham, worships with her sister, Joan, from Gainesville, Florida,” he said, “and they go ‘You know, I’ve never  been able to worship with my sister.’ ”

Joan is Joan Raudenbush. She was alerted to the service by sister Jane Mudge and typically is dressed in pajamas and a robe as she listens.

“The church is the phone,” she said.

When the service ends, she and her sister call each other and talk for another half hour — just as they would if they were at church together.

Dot Roye of Landisville, is a long-time listener. Because her husband has dementia, she has not been able to attend Wrightsville Presbyterian Church where she is a member.

“It’s really been a life saver for us,” she said. “I thoroughly enjoy the service.”

Gross can see on his laptop when people call in, and he often welcomes them as if he were standing at the church door.

At that point, the mike is open and people can chat. He then mutes the conversation and has his two teen-age assistants, brothers Walter and Joe Snyder, play introductory music. That is  followed by a prayer. Gross then asks Walter to introduce the opening worship song.

The songs that sound best over the phone, Gross said, are deep male voices and solos. And therein is another unique twist. Gross prefers gospel tunes, which he buys from iTunes, sung by country music stars. The listeners, he said, really like Alan Jackson and Johnny Cash.

At first, Gross worried about copyright laws. But when he read the fine print, he discovered a worship-exception clause that allows the music to be used in a worship service so long as it is not used for sale or distribution.

He acknowledges that “When they define worship, they’re not thinking of this kind of worship.”

But, he said, his is a worship service.

In fact, Gross may be the only pastor preaching via teleconference.

“I have searched high and low for someone else doing it,” he said, “and I can’t find anyone else.”

When Gross meets with the regional ministerium, he points out that he is the pastor at West Grove Presbyterian Church and “the entire East Coast is my congregation potential.”

Gross uses a free conferencing service  — startmeeting.com — that can accommodate up to 1,000 listeners. The service includes a question-and-answer mode that places people in a queue so they can ask questions  and present prayer needs without talking over one another.

He did unmute the system one time   for all to join in the Lord’s Prayer only to discover that the technology has its limits.

It was a “pentacostal moment,” he quipped. “It was a jumbled mess. There’s delays and stuff.”

After the prayer and music, he preaches a 15-minute sermon. He then says, “If you’re financially blessed, here’s how to send your tithes or offerings.”

Because he wants to reach people  regardless of socio-economic level, he also offers an 800 number, for which he pays four cents per minute.

The total cost of the current  operation, Gross said, runs around $1,000. And, he noted,  listeners send contributions to West Grove Presbyterian, marked FirstMobileChurch.org in the memo line, that help defray costs.

Gross has considered using a video service — Skype, for example — but expanding the audio service is his primary function at this time.

His ultimate goal, however, is to get others interested in offering the service. He has spoken to other churches but thus far, no one has followed his lead.

“Part of my offer to people is that I would love to be able to teach others how to do it,” he said. “I think the real growth opportunity in this is to teach others.”

As it now stands, he is the nation’s only cell-evangelist.

To join the service: