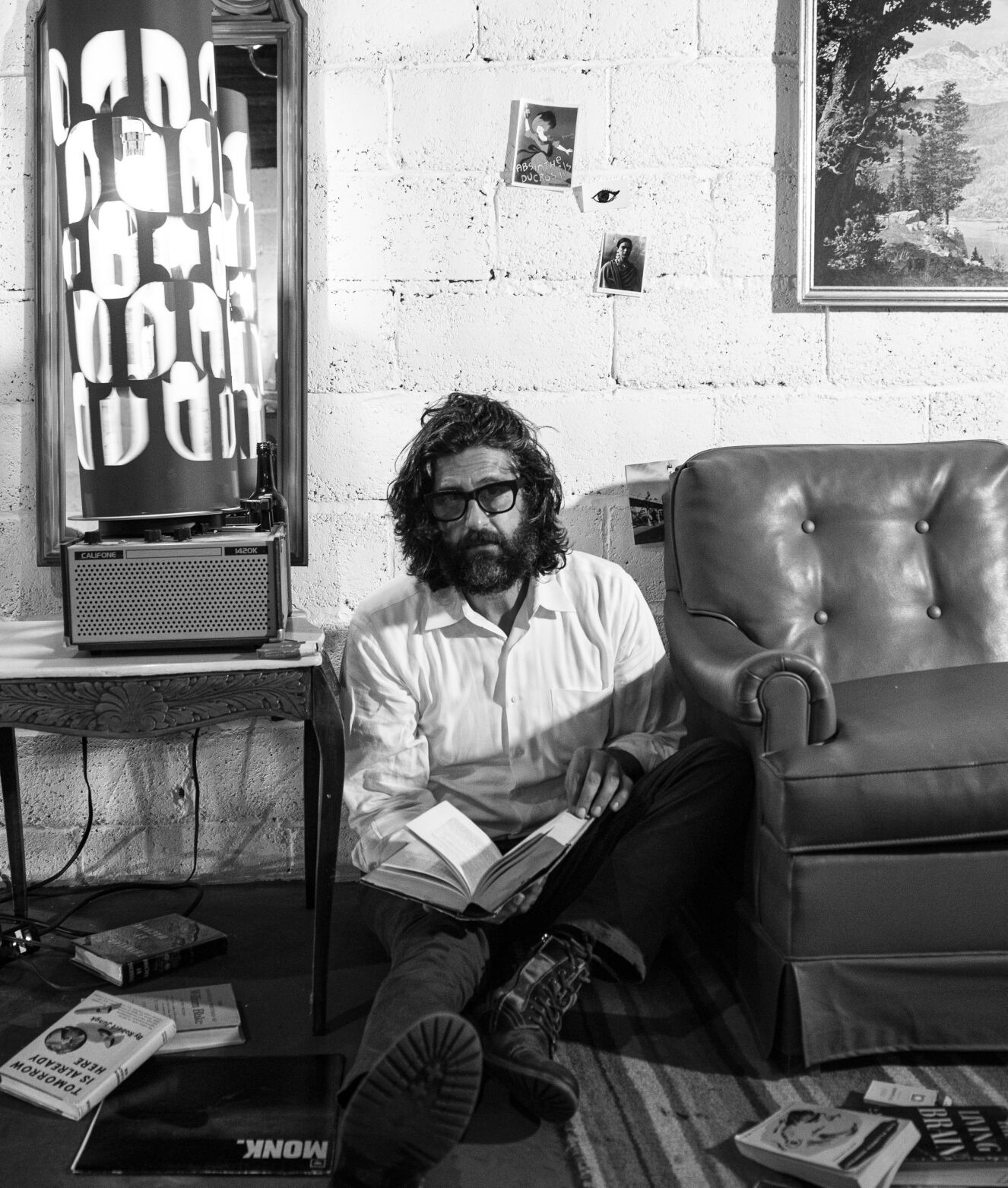 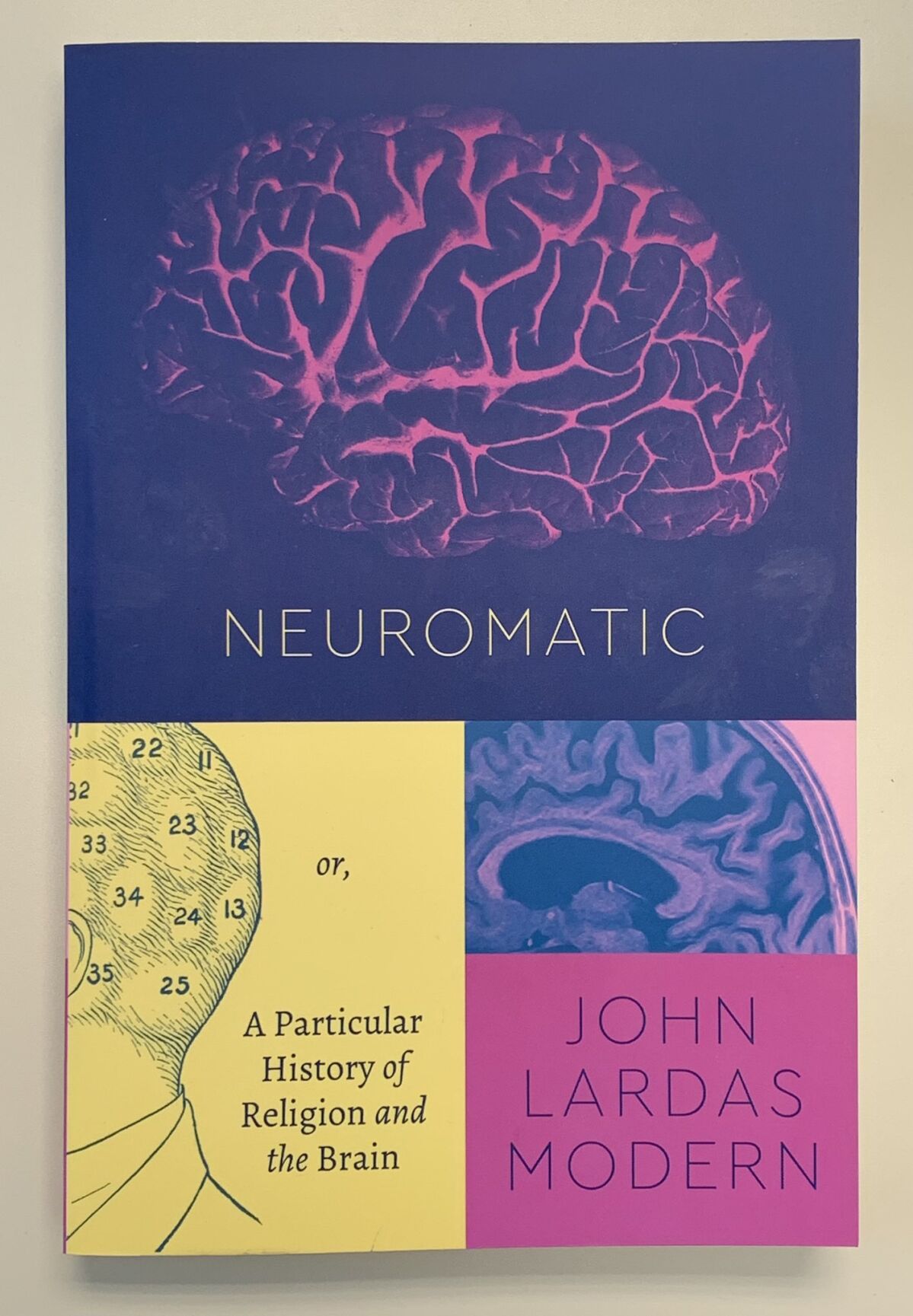 "Neuromatic: Or, a Particular History of Religion and the Brain" by John Modern.

"Neuromatic: Or, a Particular History of Religion and the Brain" by John Modern.

“I always tell my students, history is the best drug ever invented,” says Modern, 50, of Lancaster. “If you’re looking for a great experience, try history. It’s safer, it’s cheaper and there’s no hangover. You get to read and, every moment, you realize it all potentially could dissolve. And you can see how developments happen and it becomes incredible the way the world really is changing – even things that we hold to be most secure and foundational.”

Modern’s third book “Neuromatic: Or, A Particular History of Religion and the Brain,” takes a trip through history to explore science and religion via the brain while giving equal time to neuroscientists, Scientologists, scholars, avant-garde artists and mystics.

Modern has been studying religion for 30 years, but he doesn’t claim to have access to any ultimate truths about reality. And, for many readers, the book may raise more questions than it answers.

“I think as a scholar of religion, I have a lot of work to do with my classes and even my popular works, where I need to convince people on some level to give up, for at least the time they are reading my work, things that they hold to be true,” Modern says.

It’s not an easy book to digest – in fact readers may find having a thesaurus on hand to be more useful than a Bible or Koran when reading “Neuromatic” – but that’s not to say that it isn’t a highly entertaining and rewarding read.

“On one hand, it’s an academic book, and it certainly speaks to the kind of dense, scholarly conversations that are going on,” Modern says. “But for the most part, it’s just a bunch of weird stories that might appeal to people that might have an interest in the various topics.”

Peppered throughout the book are numerous photographs and interesting images – including an image of a scan of Modern’s brain – and brilliant design work by Modern’s wife, Libby Modern, artist and owner of Lancaster city’s Modern Art studio and graphic design business. Modern balances the academic and the bizarre with a colorful cast of characters from history, from religious scholars to scientists to psychics. There’s something for anyone with a curious mind.

For instance, those interested in strange phenomena may be drawn to the section in “Neuromatic” about a 1930 British dirigible crash and Eileen Garrett, a woman known for her psychic abilities; and a seance Garrett held during which she was able to discern certain specific details of the crash unknown to the public at the time.

“As a historian, I’m not going to debunk that story nor am I going to say it’s absolutely true,” Modern says. “I don’t have enough evidence one way or the other, so I put it forward as a story.”

Fans of the Beat Generation will appreciate an appearance by one of Modern’s favorite writers, William Burroughs, who pops up to explore the power of language on the human brain, the occult and the early days of Scientology.

Even Modern’s own grandmother, Dorothy Dale Flay, to whom the book is dedicated, makes an appearance.

“She had two of the strands of my story coursing through her life,” Modern says. “On one hand, she was a person of deep evangelical commitment. But she was also somebody, who like many women of her generation and her age who showed any signs of depression or anxiety, were given the option of electroshock therapy treatment, which even in the 1960s was still somewhat new and a fairly brutal procedure. So, I think about her as this person who was in between the two religion and science stories that I’m telling in my book.”

Modern begins “Neuromatic” by inserting himself directly into the academic intersection of science and religion. He volunteers to be a part of a study being conducted by Patrick McNamara, a neuroscientist and founder of the Institute for Bio-Cultural Study of Religion, and his team of researchers at Boston University. McNamara and his team are attempting to pinpoint, essentially, where religion is located in the brain and, try to understand it as a human phenomenon.

During a meeting detailed in “Neuromatic,” McNamara tells Modern, “We have the potential to figure religion out just like REM sleep.”

McNamara and his researchers have, among other things, discovered an interesting link in patients with Left-onset Parkinson’s disease that shows they have decreased interest in religion and increased difficulty understanding religious concepts.

Modern also writes about his trips to MindLab, a neuroscience research project, at University of Aarhus in Demark. He says he approached the research these groups were doing as a critical historian, not a working scientist. Like the dirigible seance scene, Modern is presenting a story and allowing the reader to make of it what they will.

The book may ruffle some people’s feathers, and that’s the way Modern wants it.

In this highly charged time when it seems that anything that can be politicized is politicized, it’s not uncommon to see a sign in someone’s front yard proclaiming that “In this house we believe science is real” across from a yard with a sign that says “Jesus is my vaccine.” But, Modern doesn’t take a position in the battle between science and religion. In fact, he often makes a point to illustrate how science and religion act as two sides of the same coin in their ongoing pursuit of universal truths.

“As a historian, I am interested in how people came to convince themselves that religion and science are distinctive registers of the human,” Modern says.

With his book, Modern explores how the brain is both “the source and spur” of religious thought and spirituality. And much of “Neuromatic” is an attempt to subvert our natural inclination to make categories.

“This book is supposed to bother you,” Modern says. “It’s not supposed to affirm what you already know, it’s designed to do the exact opposite, which for my money, is what books and art are supposed to do. Try a book that’s unsettling or perhaps is confusing, or doesn’t make perfect sense to you. Those are the best books in my experience.”

It was a Friday in late June 2015, when President Barack Obama was eulogizing his friend Sou…

The Torah commands Jews to abstain from working during Yom Kippur, the Day of Atonement. The…

Imagine kids counting down the days during summer until school starts again.

Autumn is filled with ways to celebrate, and learn more about, history in Lancaster County and beyond — from bus trips to museums to in-person…

TED Talks come to Lancaster on Oct. 25; here's what topics will be covered

Eight speakers deliver exciting lectures in 18 minutes or less at TEDxLancaster on Oct. 25.

Tim Kauffman parks his red pick-up truck in front of Grandview Church on Pleasure Road in Manheim Township on the first Sunday of the month.