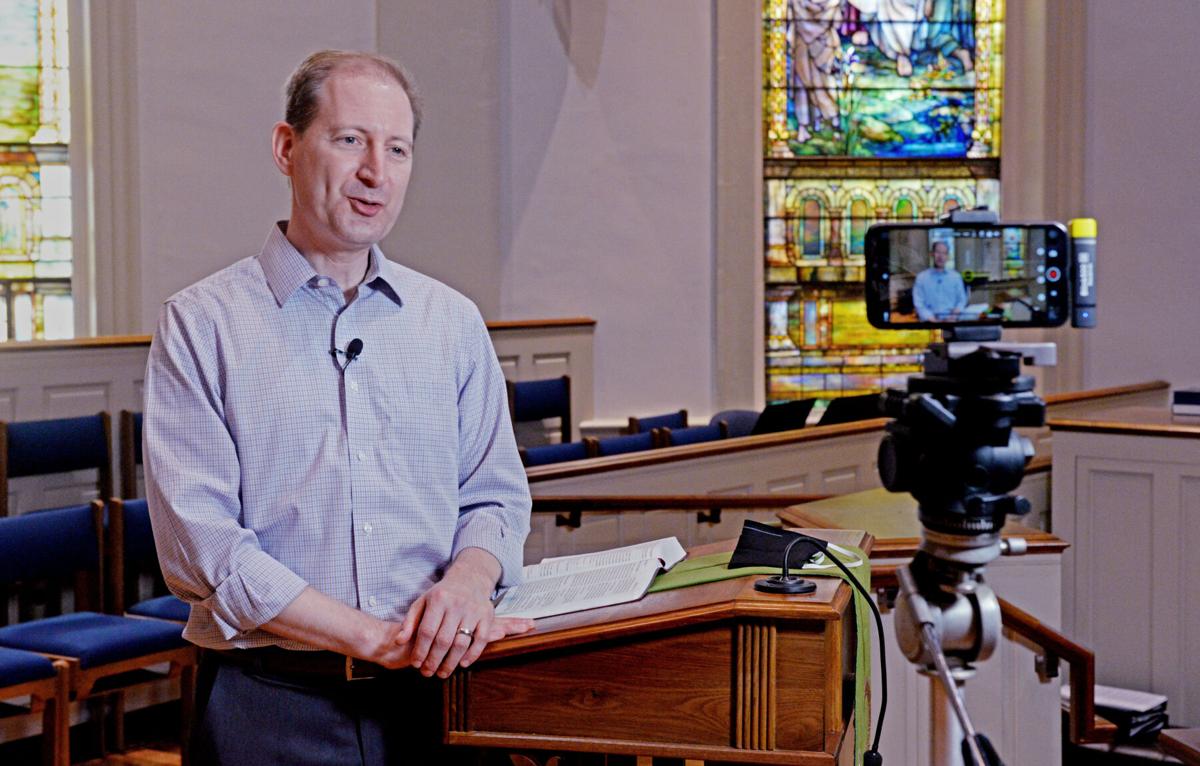 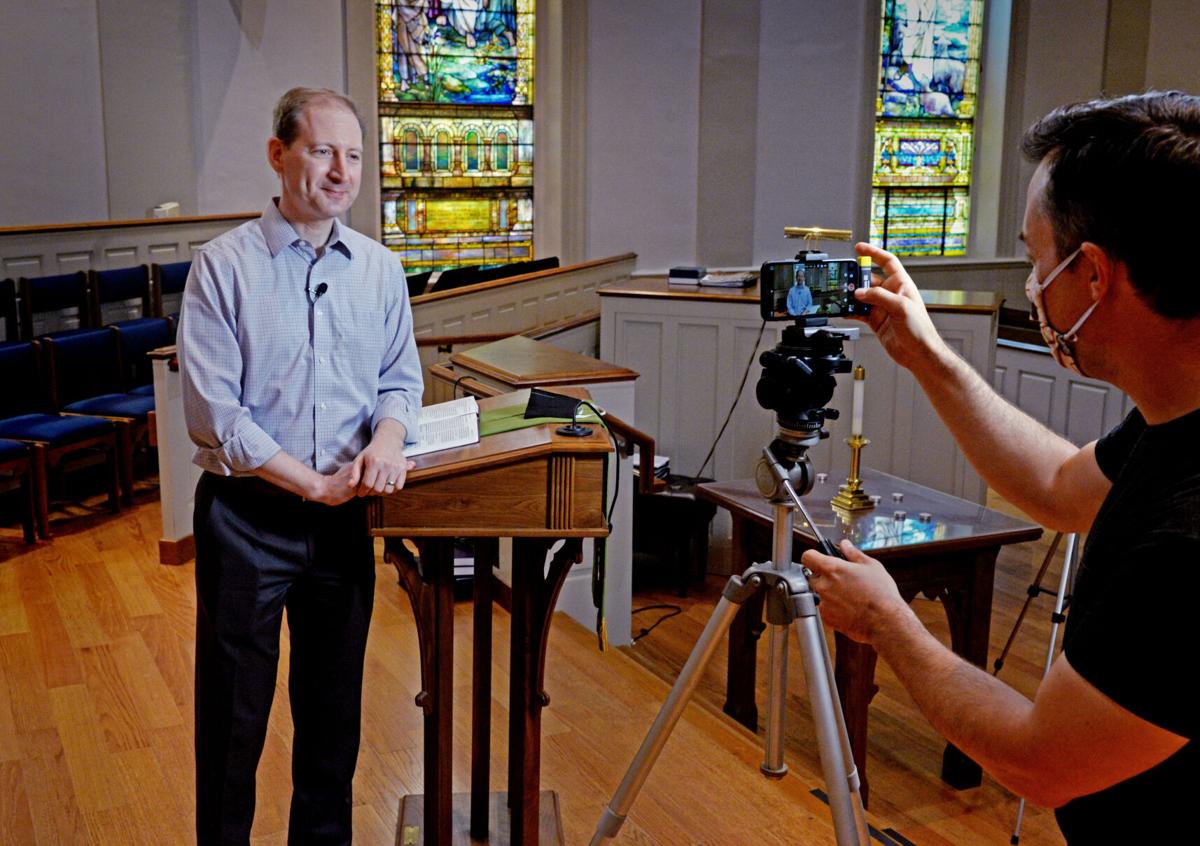 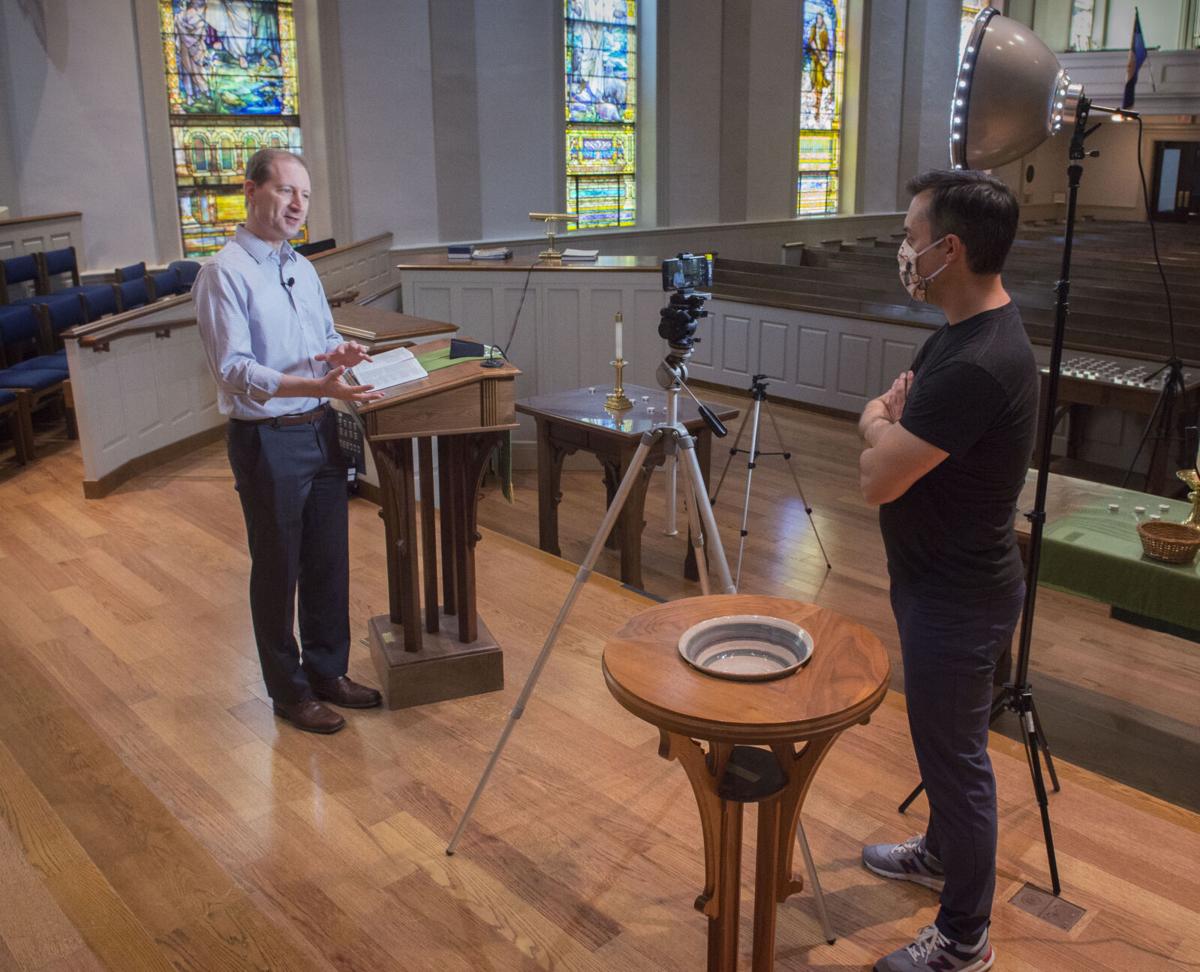 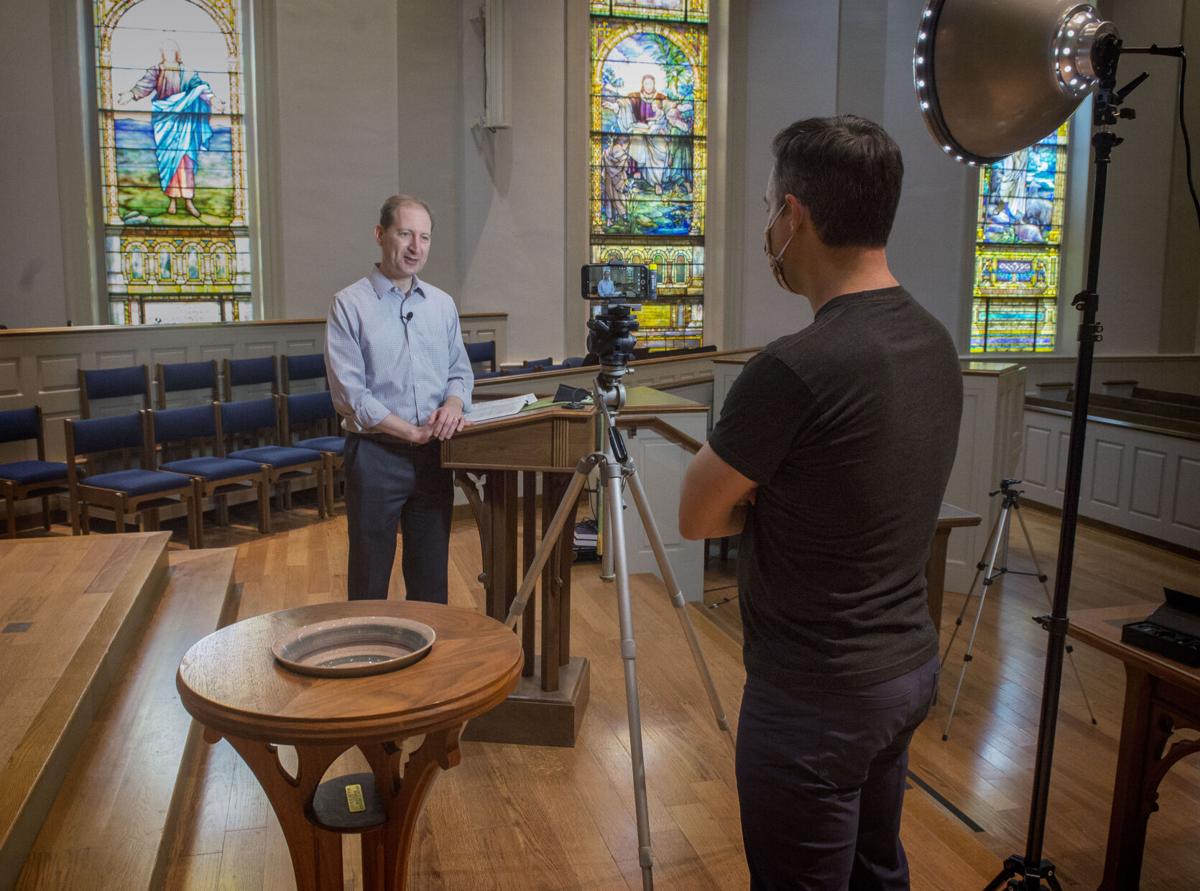 Like many churches across the country, First Presbyterian Church in Lancaster city faced a hurdle when the COVID-19 pandemic forced its doors closed in mid-March and left it scrambling in figuring out how to livestream its Sunday service.

“It was so bad,” First Presbyterian Church pastor Dan Snyder recalled. “It was terrible. We had no idea what we were doing.”

Up to that point, First Presbyterian had livestreamed its Sunday service to its YouTube page via a camera mounted on a second-story balcony at the back of the church.

But with its entire congregation now watching from home, Snyder quickly realized changes were needed for the broadcast.

“What we were doing at the beginning, we had a camera aimed at the stage,” Snyder said. “We put a high-top table up here. We sat around, talked about what everyone was going through. We prayed and whatever. And the sound was bad. Everything was bad.”

Snyder showed the broadcast to Andy Kindig, a First Presbyterian member who knew a thing or two about stage production given his many years acting in and directing performances nearby at the Fulton Theatre.

“Everything is bad about this,” Kindig said. “But I can help you out.”

By the end of March, the church dug into an emergency fund to bring on Kindig full time and gave him the job title of video coordinator. Kindig, a 1995 Penn Manor alumnus, has since brought First Presbyterian’s Sunday service recordings up to speed. More on that in a bit. Because here is where First Presbyterian might differ from other churches adjusting to the digital age over the last five months: It now has a near-daily post to its YouTube page.

Every Wednesday is a video for the church’s youth group from church director of youth ministry Derek Siewart. Every Thursday is a video for the older congregants from director of pastoral care Laura Sambrick. In between is a mix of videos. Some might be a simple song from worship leader Nate Bankert, a short interview designed to learn more about a certain church member, or a fun lesson from Kindig’s wife, Katie, who is the church’s director of children’s ministry.

“I empowered my staff,” Snyder said. “I wanted my staff to be in front of people.”

Each message follows a similar theme throughout the week, or at least that’s the goal.

“We talk as a staff on Monday mornings about the scripture for the coming week,” Snyder said. “They’re spending the whole time thinking about how that’s going to impact what they do in their video.”

Every Sunday, in lieu of the livestream, the worship service is now instead uploaded to First Presbyterian’s YouTube page, after having been recorded in parts earlier in the week and put together by Kindig. The setup is purposely done in order to keep viewers engaged.

Along those lines, Kindig has recorded Snyder in different parts of the church for the Sunday message. Such as First Presbyterian’s outdoor memorial garden. Or inside the church, with the background filled out by one of the 13 stained-glass windows, the oldest dating back to 1850, when the church was originally constructed. Or in the church basement, where there are headstones in the wall marking the gravesites where some deceased members are now buried. Or in the church steeple high above the city.

“And so this is why, especially our older adults, but the whole church, they feel more connected to church,” Snyder said. “These are parts of the church that they’ve never seen before.”

Before the pandemic, the church averaged about 400 regular attendees over its two Sunday morning services. Post-pandemic, its Sunday virtual worship videos are averaging more than 200 views.

It’s worth noting here Snyder also hosts a call-in service over the phone at noon each Sunday for its older congregants who may not be as technologically savvy. The church’s Sunday virtual worship program is also broadcast every Sunday at 1 p.m. on Lancaster Community TV, which is on Comcast Channel 66.

Lancaster Community TV CEO Frank Altdoerffer has aided the church by donating some camera equipment. But sometimes, Kindig records on a smartphone, using a Bluetooth microphone to pick up the audio. He’s learned to edit video from YouTube tutorials.

“I think I’m a steady B-plus student now,” Kindig said. “I’m not great at the shortcuts. But I’m learning.”

If you haven’t noticed yet, First Presbyterian is covering its bases to offer people multiple ways to worship, whether it be online, over the phone or on TV.

That’s in addition to recently welcoming a limited number of congregants back last month for in-person Sunday morning service, while taking safety measures and social distancing.

So what happens when the world gets back on its feet and First Presbyterian can again fill its pews? Will it continue with the progress made through online platforms?

“If we went back, we would lose all the learning,” Snyder said. “We have learned so much in the last five months. ... There’s no data on this yet, but I think this is what our future is going to be. I think we’re going to be hybrid.”

The Ragman visited our neighborhood only a few times during the warm months of the year.

New Holland Elementary students will be covered with face masks made by Garden Spot Village crafters when they return to school Aug. 31.

The 37th annual San Juan Bautista Hispanic Festival will look quite different than past iterations.

As antiracism protests have swept across the country since the May 25 death of George Floyd under the knee of a Minneapolis police officer, th…

We asked Lancaster houses of worship about their COVID-19 mask policies; Here's what a few said

When Lancaster County houses of worship welcomed back their members for in-person services, their policies regarding health and safety varied …