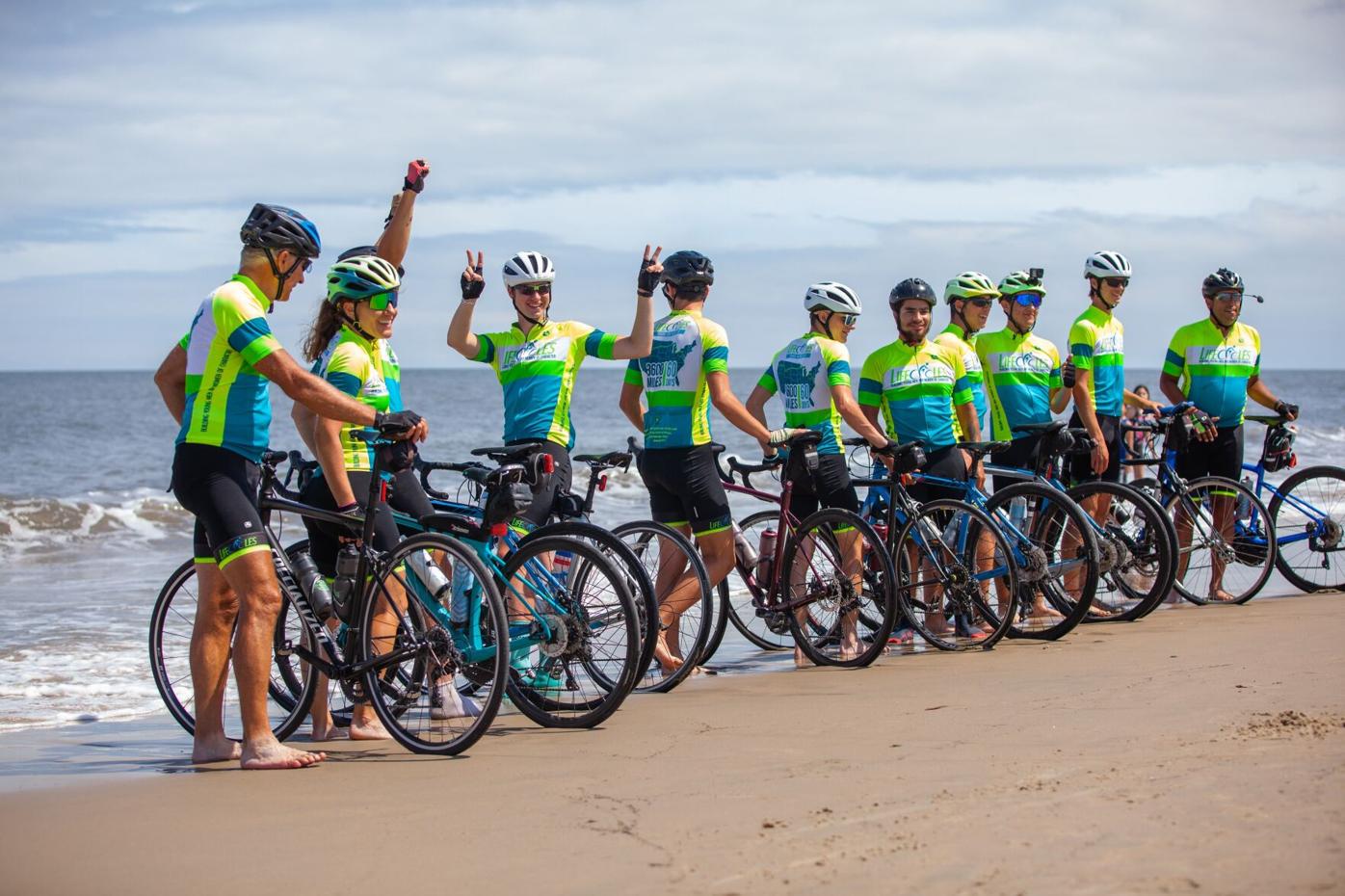 The Lifecycles group dips their bike tires into the Atlantic Ocean at Cape Henlopen in Delware after finishing their cross-country ride. 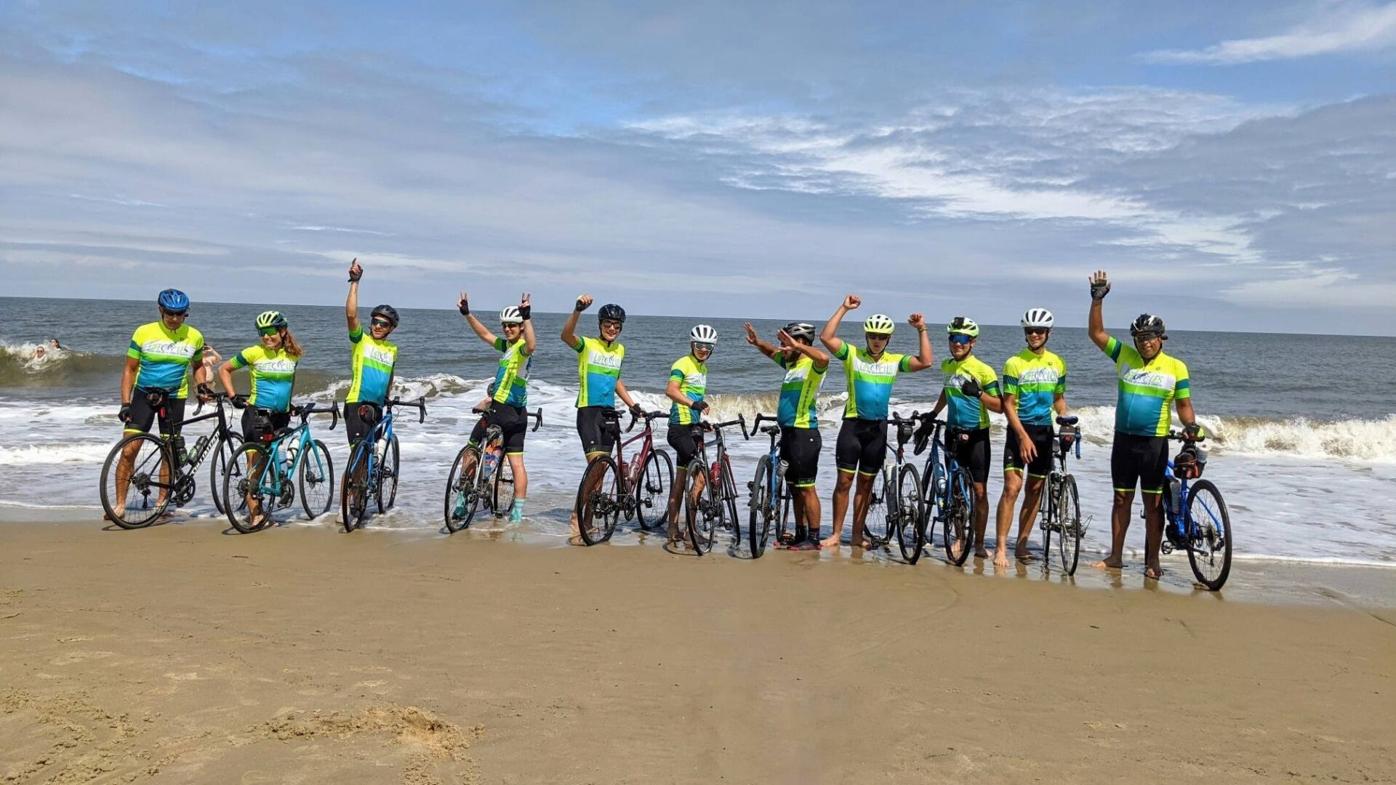 In the early morning hours of June 10, Zach Greineder dipped the back tire of his Giant Contend AR3 bike into the Pacific Ocean. He was one of eight young men and three adults standing along the shore at Sunset Beach in Oregon. “We dipped back tires in the ocean then got on the road and thought, ‘How in the world are we going to get to the other side?’ ” said Greineder, 17, of Millersville.

By the “other side,” he meant of the country.

Greineder, a freshman at Thaddeus Stevens College of Technology is one of eight young men ages 16-21 and three adult leaders from Lifecycles – a Lancaster-based group that seeks to build young men and women of character through cycling and spiritual development – that recently completed the ride of a lifetime.

The group, which includes about 70 students and leaders, is divided by age, sex and skill level. Members are able to take part in a Christian-based curriculum, as well as weekly rides and longer challenge rides. The young women’s teams were added three years ago. Members of the most advanced young men’s team – the Falcons – made up the group that went on the cross-country ride, the longest ride in the group’s history.

One of the Lifecycles mottos is “Do hard things,” and they put that slogan to the test as the group embarked on a ride that stretched 3,700 miles across the country from Sunset Beach, Oregon, to Cape Henlopen, Delaware.

Sixty days later, Greineder and the group were standing on the beach in Delaware dipping their front tires into the Atlantic Ocean.

“I never thought I would bike across the country, and here I am,” says Greineder, recalling the day.

The group traveled through 14 states, biked 115 miles in a single day, pushed through 105-degree heat and extreme winds and cycled over Beartooth Pass in Wyoming, which is nearly 11,000 feet above sea level.

Greineder says his personal highlights include seeing the Montana landscapes and riding around the Great Lakes in Michigan. The mountains in Washington state tested Greineder early on in the trip, he say.

“I’d never thought in a million years I’d be able to bike over those mountains, but I kept on going,” Greineder says. “There’s no denying it’s a hard thing, but in the moment, you’re just pushing yourself beyond the limits.”

The group mentality and his spirituality were key motivating factors, Greineder says.

“Everyone was motivating me, which really helped,” Greineder says. “Anytime I was going through a hard time, I would pray or I would think about something like in the Bible, and just think about that instead of thinking about going up a mountain or a long flat.”

Challenging teens (and adults, too)

Michelle Deller, 46, was one of three adult leaders on the trip.

“Lifecycles is important organization in today’s culture,” says Deller, of New Danville. “Especially to challenge teens to do something hard physically.”

Deller organized the ride, which was supposed to take place last summer but had to be rescheduled due to the COVID-19 pandemic. Deller handled booking hotels, and other leaders planned the route and organized nightly devotional services.

The cross-country ride was not only a first for the young men, but for Deller, too. Previously her longest bike trip was a nine-day ride in Thailand. According to Deller, the group put in 247 hours of pedaling during the trip and averaged about 70 miles a day,

Deller says the group is always challenging the young men and women to do something difficult to help them develop character and experience the reward of accomplishing something they didn’t think they’d be able to do.

“You can challenge yourself to do something that seems impossible, but each pedal stroke adds up and can be something incredible,” Deller says.

Finding my way back to a church community [column]

Why church? There seems to be an obvious answer if you attend a place of worship, but I’m di…

How do plants react to different types of music? This science fair winner has the results [video]

Scientists have studied music and its effects in humans. But what about its effect on plants?

The Torah commands Jews to abstain from working during Yom Kippur, the Day of Atonement. The holiest day in the Jewish religion starts at sund…

Reverberate, an evening of Christ-centered outdoor worship, stories and music, will be held from 7 to 9 p.m. Tuesday, Sept. 14, in Long’s Park…

Jean Parvin Bordewich spent two decades working on staff in the U.S. Congress. So when she was inspired to write two recent plays, she was nat…

LancasterHistory has announced its series of Regional History Colloquium talks and Presidential Lectures for this fall. The series will be hel…

Fires, floods and accidents, oh my! Every day, there are people who read the news in the morning and then find themselves featured in it that …

Early fall used to be the time of year for getting excited about new seasons of my favorite TV shows.

Organist Tom Breneman has a favorite quote about music, from Martin Luther in 1517.