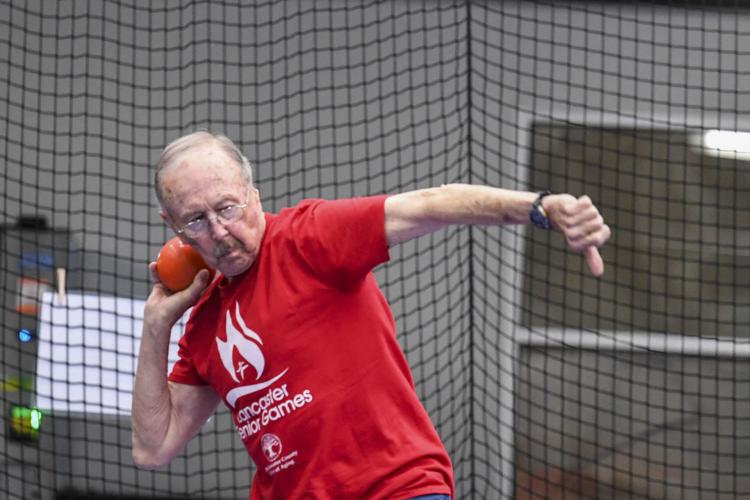 David York throws in the shot put competition on Wednesday, May 8, 2019. More than 1,000 Lancaster County residents competed in the 32nd annual Lancaster Senior Games, held at Spooky Nook. The five-day competition hosts 56 events, ranging from darts to the home-run derby. 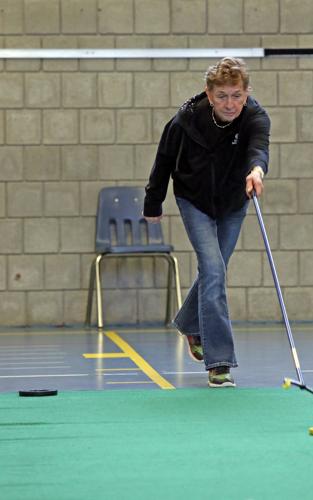 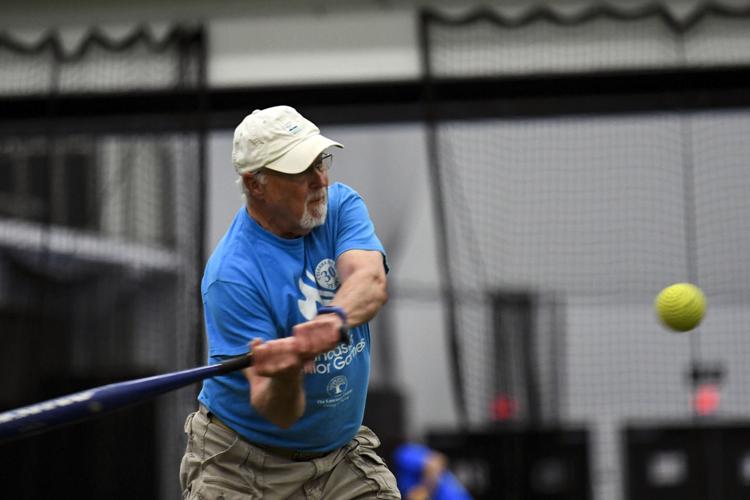 Wayne Boggs gets ready to swing on a ball during the home-run derby on Wednesday, May 8, 2019. More than 1,000 Lancaster County residents competed in the 32nd annual Lancaster Senior Games, held at Spooky Nook. The five-day competition hosts 56 events, ranging from darts to the home-run derby. 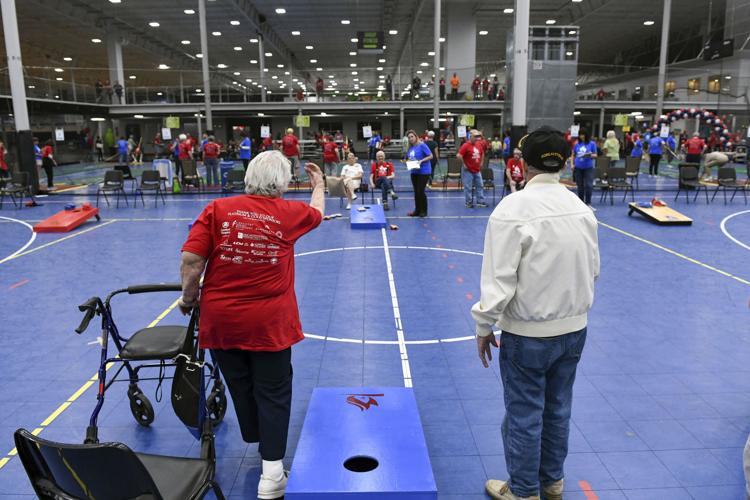 The Lancaster Senior Games, the week-long event featuring athletic contests and activities for people over 55, returns Monday after a two-year hiatus due to the COVID-19 pandemic. And if there’s anything we’ve learned during two years of social distancing, Zoom events and lockdowns, it’s the importance of social and physical activities — especially for seniors.

“I think everybody is anxious to see people they haven’t seen in two years,” says Pat Fellenbaum, 74, who founded the Lancaster Senior Games in 1989 and is now a community representative on the board. “A lot of people connect with friends. So, everybody is anxious to do that, plus have a good time while they’re doing it. It really makes me feel good. You take a big sigh of relief that, maybe, we’re getting back to normal.”

The 32nd Lancaster Senior Games continues through Friday at Spooky Nook Sports near Landisville and other Lancaster County venues and parks. Registration for the 2022 Senior Games is closed, but the games are open to spectators.

Jack Neal, a volunteer referee who is also participating in 14 events during the Senior Games, is excited to be getting back to the games.

“It’s something that has been greatly missed,” says Neal, 73 of East Hempfield Township. “This is like senior camp. You see friends there — some that you haven’t seen in a long time — and you make new friends. That’s a big benefit.”

This year’s event has 807 participants and more than 325 volunteers to assist with managing the event and refereeing.

“I’m one of many,” says Neal, whose wife Sandy also volunteers and participates in the games. “As a ref, it’s not the NBA or the NFL. People mostly referee themselves. We’re just there to supervise. That’s sort of the sportsmanship that goes along with the Senior Games.”

The games are competitive, especially the shuffleboard and bocce ball tournaments. But it’s a friendly competition – with a strong emphasis on “friendly.”

“People that previously participated are telling us that they’re really happy to get back to doing something fun, and new people are looking forward to experiencing the games,” says Lisa Paulson of the Lancaster County Office of Aging – the organization that coordinates the Senior Games. “It’s a great event that brings a lot of smiles and laughter.”

Neal agrees that the opportunity to have fun while being active is a big draw to the weeklong event.

“I have a friend who is a doctor, and he said the number one item late in life is keep moving,” Neal says. “This gives you an opportunity to do that and have fun. That’s something I want to emphasize, it’s a fun week.”

And that was the idea behind the Senior Games in the first place.

“That’s one of the reasons we do it. We try to tell people to get out and enjoy the sports and activities and meet people. We don’t put so much emphasis on the competitiveness, but there is competition,” Fellenbaum says. “One of our goals is to get people out and doing things so that mentally and physically they stay sharp. We watch so many people who retire and do nothing, and unfortunately, they don’t live very long it seems. You’ve got to keep moving and keep going and keep strong.”

Pat Fellenbaum’s husband John recalls being impressed one year by the fact that 23 Senior Games participants were in their 90s.

“One of the best highlights that I can remember is we had two fellows who had been in World War II and they hadn’t seen each other since they left the army, and they met up at the Senior Games. That was a really neat story,” Pat Fellenbaum says.

Fellenbaum was inspired to bring Senior Games to Lancaster when she was working for the Lancaster Recreation Center and saw West Chester was holding games for seniors. She says the Lancaster organization tries to keep up with trends and introduce new events each year like cornhole, ladder golf and even video games including Nintendo Wii activities.

New to this year’s event even is an acrylic canvas painting session. Fellenbaum appreciates how inclusive the event is, especially for participants who may not be physically able to compete in other categories. Plus, painters get to take their creations home after the competition is over.

Judy Anttonen, of Millersville, has been participating in the Lancaster Senior Games since she was eligible at 55.

“I’m 81 years old. There was no Title IX. There was no opportunity,” says Anttonen.“I had intramurals in high school and I swam for the YMCA. I was a tomboy.”

“I didn’t start running until I was in my 40s,” says Anttonen, who regularly runs 5Ks and has run a half marathon and multiple triathlons.

Anttonen, who is a serious competitive swimmer, says she’s scaling back on the number of events she’s participating in this year due to a national swimming competition taking place three days after the Senior Games.

But even her scaled-back schedule can make an athlete years her junior tired just reading it; Anttonen is planning to participate in cornhole, shuffleboard, basketball, table tennis, badminton, walking, softball throwing, soccer penalty kicking, frisbee golf, darts, billiards and par 3 golf. Oh, and all the swimming events too, she says.

Yet, with all her personal drive to compete, Anttonen says the Senior Games are more about the camaraderie and the fun than anything else.

Allowing spectators adds to the fun, too. Paulson says many participants particularly enjoy the role reversal of having their children and grandchildren in the stands cheering them on.

“If you’re looking for a fun time doing a variety of sports you should come out this year and see what it’s like and sign up for next year,” Neal says. “You’ll see a lot of friends and make new friends.”

Normally this time of year, Dave Martin and his rag-tag group of pickleball friends would be…

Find more information, the list of sponsors and a complete schedule of events at lancseniorgames.org.

Book cowritten by Lititz author celebrates joy of being a grandparent

Throughout her life, Shirley Showalter has loved being a teacher, a professor, a college president, a wife, a mother and an author.