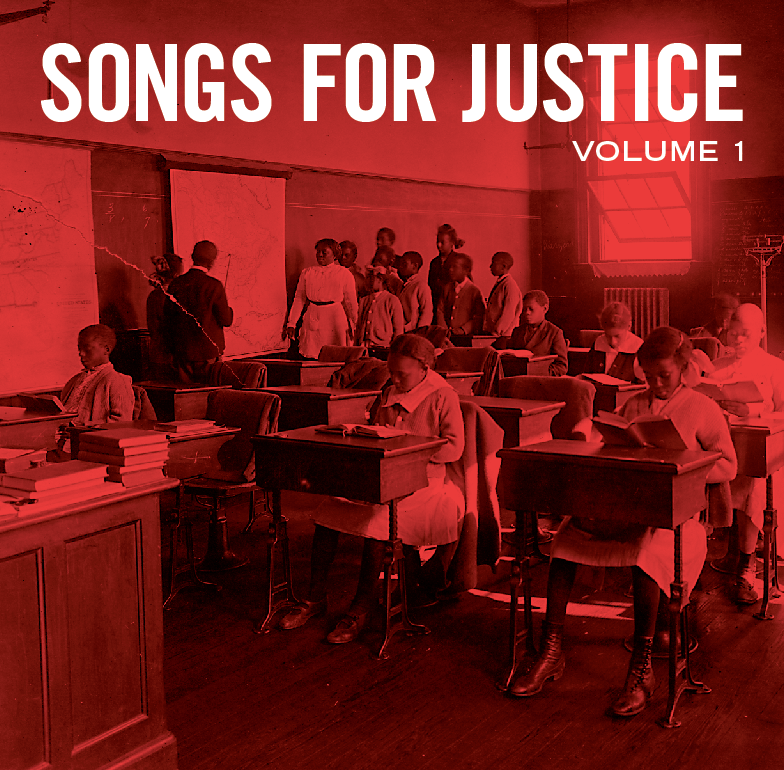 The front cover of the first single of Music for Everyone's Songs for Justice project. The Library of Congress photo used for the single's cover depicts students learning in Thaddeus Stevens School around the turn of the 20th century. 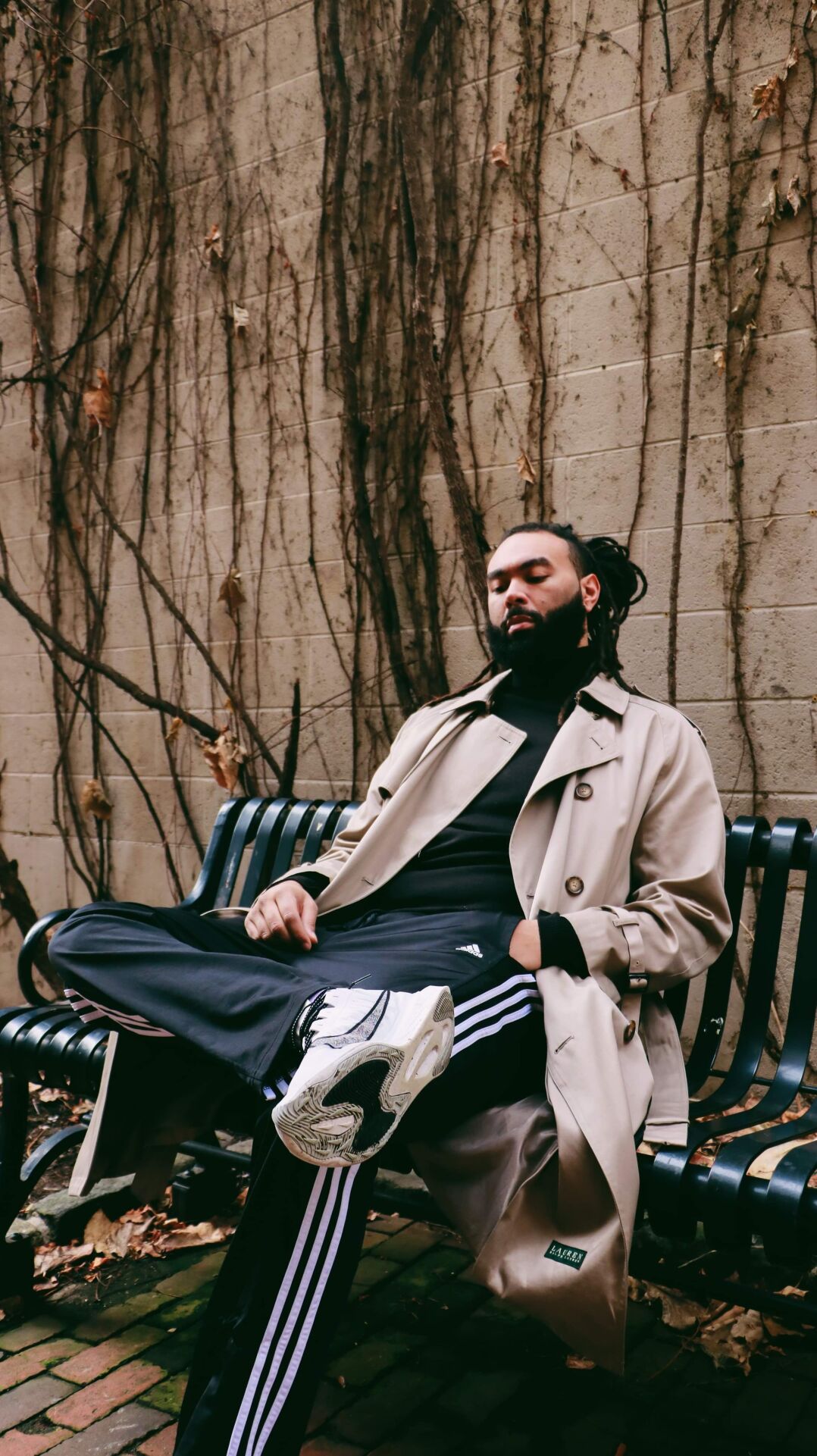 Terian Mack, pictured here, is the first artist participating in Music for Everyone's Songs for Justice project. His song, "Believe," will be the A-side of the first vinyl single, to be released later in April. Photo by Joshua Beltre/Jazz White Collective.

The front cover of the first single of Music for Everyone's Songs for Justice project. The Library of Congress photo used for the single's cover depicts students learning in Thaddeus Stevens School around the turn of the 20th century.

Terian Mack, pictured here, is the first artist participating in Music for Everyone's Songs for Justice project. His song, "Believe," will be the A-side of the first vinyl single, to be released later in April. Photo by Joshua Beltre/Jazz White Collective.

The song begins with an industrial beat and a minor key-laden melody, before a booming voice shines through with an inspirational hook.

The song is “Believe,” and the voice belongs to Lancaster’s own Terian Mack. An artist for much of his life, Mack’s style of introspective hip-hop shines through in “Believe.” While it was originally released as part of Mack’s 2019 album “Babylon the Great,” the song will be given new life as the first single in nonprofit Music for Everyone’s upcoming “Songs for Justice” project.

The initiative, almost a year in the making, unites Lancaster musicians, poets and visual artists around the release of a series of vinyl records, each dedicated to different social justice and civil rights platforms. The 45 RPM records will feature an original song on the A side, with the B side containing the reading of a historical speech by a prominent Lancastrian.

Joining Mack on wax is current president of the Thaddeus Stevens School of Technology, Pedro Rivera, who fittingly will read Stevens’ April 11, 1835, speech in opposition to the repeal of the Free Schools Act of 1834 in the Pennsylvania House of Representatives. The first Songs for Justice record will also feature the poem “Until We’re Not” by Le Hinton and artwork by PAVAA Gallery co-owner Gerri McCritty.

The first record was originally scheduled to release today, but due to a delay at the record-pressing plant, will be released before the end of April.

According to Music for Everyone founder and executive director, John Gerdy, the project was born out of the Black Lives Matter protests of 2020, following the death of George Floyd, and the need to do more than offering words.

“Most organizations and businesses did their social justice statement, and you know, most of those were fairly lame,” Gerdy explains by phone. “They all sort of said the same thing, you know, ‘Black lives matter’ and ‘We have to do better’ and ‘We’re all in this together.’ But we said, we have to do something more, and something concrete, not just words, something with action.”

Each record will benefit a different Lancaster organization, and those organizations will be given up to 100 copies of the record to do with as they please, including selling them as fundraiser items. The first benefiting organization is the Lancaster Education Foundation.

When Music For Everyone asked Mack for a submission, he only submitted “Believe” because he felt so strongly about it.

“The message in the song means a lot to me, and it was actually a poem before it was a song,” Mack says. “I was sitting on the poem for years, honestly, and then the opportunity came to turn it into a song. It’s always been special, so once (Music For Everyone) said the idea, I instantly knew that was the song.”

Other than some CD releases when he was younger, this single will serve as Mack’s first physical release (and yes, he says he still needs to get a record player so that he can play it). Dominique Jordan, who is not only a friend and fan of Mack’s but a poet and musician as well, is contributing an original poem on a future “Songs for Justice” release.

“Terian Mack is sonically ahead of his time, so as soon as that ‘Believe’ track comes on, (when people hear it), whether they’re listening to it or not, they’re internalizing the energy,” says Jordan, who refers to himself as an “artivist.” “The spirit is cultivating inside of them to help them manifest whatever is necessary for us to come together and change the future, and be more sustainable in our relationships with each other and the planet.”

After leaving a job at QVC in April, Mack has been hard at work on an official album follow-up to “Babylon the Great,” laying down tracks with producers Keyon Christ and Johan Lenox, who have worked with the likes of Kanye West and Travis Scott.

Mack will also take part in a virtual discussion on the role of art in social change on Wednesday, April 7, with Rivera, Hinton, McCritty and Ann Womble, executive director of the Lancaster Education Foundation.

For Gerdy, “Songs for Justice” isn’t just an encapsulation of the last 15 years of Music for Everyone’s work in education — it’s a way that he himself can get educated.

“That’s a big part of this thing — we’ve all got to accept responsibility and accountability and educate ourselves,” Gerdy says. “Particularly white America. Let’s be honest, it’s like, we created this, we’re responsible for it and everyone needs to do whatever they can possibly do, to the best of their ability, to try to make a difference with whatever resources they have at their disposal. I think there’s been a shift. More people are stepping out and trying to be part of the solution. We’re convinced that there’s a lot of organizations and businesses that want to do something more concrete, but they don’t know what to do.”

The social justice role of businesses and organizations was put under a microscope following the protests nationwide following the deaths of Floyd, Breonna Taylor and others in the spring and summer of 2020. In Lancaster County, businesses such as the restaurant Luca faced backlash from former employees for not speaking out about Black Lives Matter. The restaurant closed for two weeks and then reopened after announcing it was working with the Lancaster chapter of the NAACP to help “use (their) platform for positive change.”

“I think if we’re talking about businesses that aren’t necessarily Black- or brown-owned but want to support the cause of Black Lives Matter, you have to be intentional about what you’re doing,” says Jordan, who is also a co-host on The Cultured Professional’s podcast “Hip-Hop & Politics.”

“And intent doesn’t always equal impact, right? I have a saying that I use, which is ‘What that impact do?’ So, like, if you want to jump into this space, you have to lean on the people that are being oppressed. One thing I can really respect out of someone like John Gerdy, who I don’t really know, is that he talks to me like I’m the subject matter expert of my experiences. A lot of, for lack of a better term, powerful white men don’t do that. (John) basically asked me to spread some more insight on why people feel the way they feel. And I’m not the subject matter expert, but again, I am the subject matter expert of my experiences. I think what it really takes is not just being willing to have the conversation, but also being willing to stop, listen and internalize the information.”

Future “Songs for Justice” releases will center around different cultural experiences, including those dedicated to immigrants and the LGBTQ community. Gerdy says that Music for Everyone has releases planned for dates spanning the next two years.

“That’s the beauty and power and potential of music — it’s the universal language, which means that it provides a broad playing field to leverage that power and potential,” Gerdy says. “It’s an educational tool, it’s a community-building tool, it’s an economic driver. Our mission has continued to evolve, and the reason we’re able to do that is because we try to be a very nimble organization and always be aware and recognize opportunities in which we can leverage our resources and brand and contacts to hopefully, at the end of the day, contribute in a positive way to our community.”

Both Mack and Jordan are excited, not only for themselves to feel the spotlight, but to see that light shine on other under-represented artists throughout Lancaster County.

“I can listen to Terian every day, but there’s a ton of artists that have great music that no one has ever heard of, and some may not have, so the fact that Music for Everyone is doing this not to big themselves up, but to put Terian Mack and other artists in a light that we’ve never been seen before, now it’s on us to keep that energy and stand up for the masses,” Jordan says. “I’m excited to be a part of it, and it’s an honor just to be a part of it, because I know it’s going to reach so many more people than we ever thought.”

For updates on the Songs for Justice project, visit musicforeveryone.org/songsforjustice.

After a winter like Lancaster County has had, it does a body good to get some quality spring…

Occasionally, the mundane minutiae of everyday life can add up and reveal something powerful.

Break out your record players - Music for Everyone is dropping singles beginning in April.

Not everyone can pay the bills by playing the guitar.

Exploring the wild and weird corners of TikTok [Unscripted column]

Every night, I stare at my phone for upward of an hour, my face illuminated by the glow of the screen mere inches from my nose.

She remembers friends, adventures in the former East Germany [I Know a Story column]

When my husband and I drove across East Germany (the German Democratic Republic/GDR) in 1970 on our way to West Berlin, I could never have ima…

Want to surprise Mom with a concert for Mother’s Day? This nonprofit can help

Moms are special every day of the calendar year, but admit it, you try a little harder come Mother's Day.

How Penn Manor turned its spring musical into a filmed production, premiering Friday

A few Penn Manor High School teachers refused to let the pandemic steal one more milestone from their students’ careers. The show, they decide…

When all is said and done with the pandemic era, I’ll be happy to leave many of this time period’s cultural artifacts behind.

It has been a long time since it was apropos to report box office numbers for major motion pictures.

With a summer off from "Saturday Night Live" duties, comedian Melissa Villaseñor is hitting the road.

Jeremiah Wilson was 30 minutes from his destination.