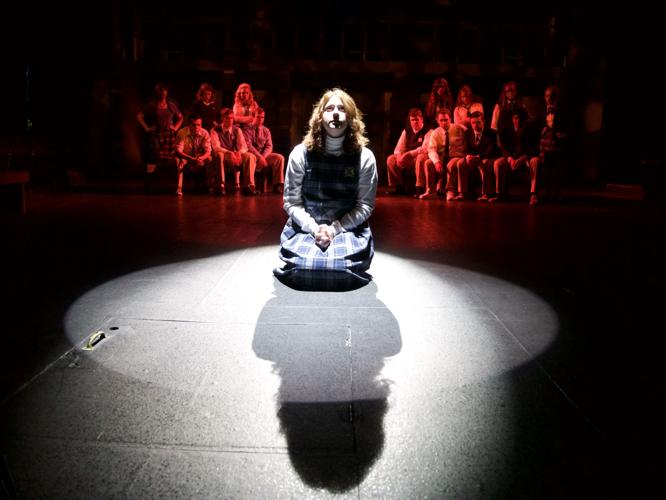 In one of the opening scenes of "Carrie," Natalie Young as Carrie says a prayer as the cast of menacing peers watches in the background. 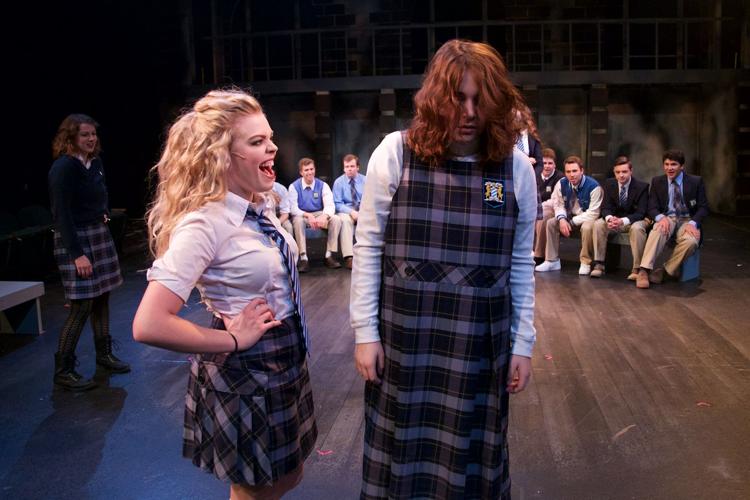 Rachel Faust as Chris menaces and Natalie Young as Carrie in the Ephrata Performing Arts Center production of the musical "Carrie." 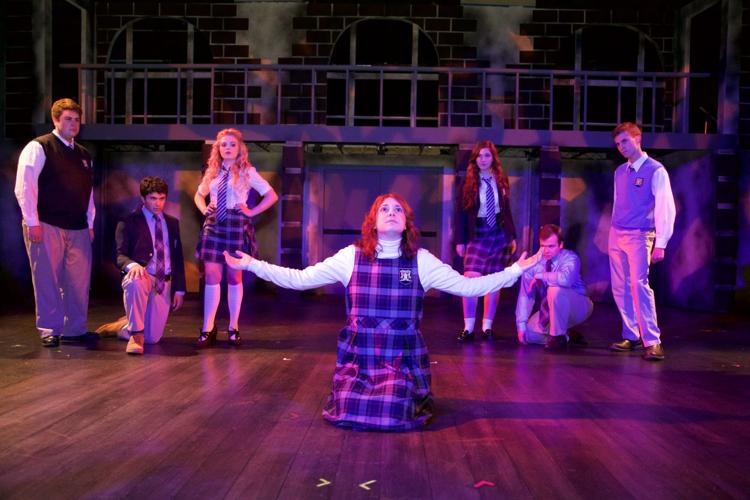 The cast of EPAC's "Carrie"

In one of the opening scenes of "Carrie," Natalie Young as Carrie says a prayer as the cast of menacing peers watches in the background.

Rachel Faust as Chris menaces and Natalie Young as Carrie in the Ephrata Performing Arts Center production of the musical "Carrie."

The cast of EPAC's "Carrie"

Stephen King’s novel “Carrie” struck a nerve when it was published in 1974. The story of a girl mercilessly bullied by her classmates and getting her revenge at the prom had enough reality in it to send shivers down all our spines.

So how does it hold up some 40 years later in “Carrie: The Musical,” which opened Thursday night at the Ephrata Performing Arts Center?

Thanks to a knockout cast led by Natalie Young as Carrie, this production is superbly fun and might just send a little shiver down your spine.

The show begins with the chorus of teens reminding us that it isn’t easy being a teenager, that everyone feels the pressure and insecurity.

Of course, those very same kids have no problem bullying fellow student Carrie White, who can’t play the high school game. Her hair hangs over her face and she can barely say a word to anyone because she’s so scared and shy.

After a horrible incident at school, things get way worse.

Carrie gets her first period and has no idea what it is. She comes screaming out of the showers, scared she’s dying.

The girls have a field day with her, taunting her and throwing tampons at her. The gym teacher, Miss Gardner (a wonderfully funny and warm Trish Corcran) breaks it up and forces the girls to apologize to Carrie.

This doesn’t sit well with Chris (a fabulously nasty Rachel Faust), the leading bully in a high school full of them.

She thrives on taunting Carrie while her good friend, Sue, begins feeling guilty about participating in the bullying. The show emphasizes Sue’s guilt a lot and some of the scenes are a little hokey, but Heather Bounds handles them perfectly, being nice but not saccharinelike.

When the incredibly spoiled Chris is told she can’t go to the prom because she won’t apologize, she seeks her revenge. Her skanky boyfriend, Billy (Josh Yannuzzi, who does skanky quite well), loves taunting Carrie and comes right on board. So do a bunch of other kids.

Heather tries to do something nice for Carrie by asking her boyfriend Tommy (an earnest Andrew Patterson) to take her to the prom.

This will backfire, of course.

Carrie has more problems than the nasty kids at school. Her mother, Margaret (a magnificent Bobbi Bear), is deranged. A religious fanatic, Margaret keeps telling Carrie how evil men and sex are. When she discovers Carrie has had her first period, she is furious. Carrie is now a woman, and that is bad. She locks her in the basement.

The scenes between Young and Bear are tour-de-force all the way. Both have amazing voices and know how to put forth a song.

And Margaret’s turning words from the Bible into excuses for murder are chilling.

Unlike the rest of the show, the scenes with Margaret have no humor; they are full of dread. But Bear is so good that you feel for her in her insanity.

The humor in “Carrie” is a tricky thing. This is not a campy show; it plays the story straight.

Young is able to give Carrie depth and a heartbreaking excitement at the prom. But there is little attempt to give characters such as Chris and Billy any depth. These kids are nasty! And Carl Bomberger is funny as the wry English teacher who often commiserates with Miss Gardner about how bad these kids are.

Director Ed Fernandez does a fine job balancing the tone and helping his actors see the emotion in the midst of the show. Kristin Pontz does a fascinating job with the choreography, adding some “Spring Awakening” moves to the energetic, spry musical numbers.

Voices are out of this world, especially when everyone sings together and music director Zach Smith keeps up with them.

One criticism: The big horror moment at the prom (I won’t spoil it for those who don’t know the story) wasn’t as climactic as it should have been. The way it was staged muddies the drama and deflates some of the potential power of it.

But there is much to enjoy in “Carrie,” and it is wonderful to see the deep talent in these young actors.