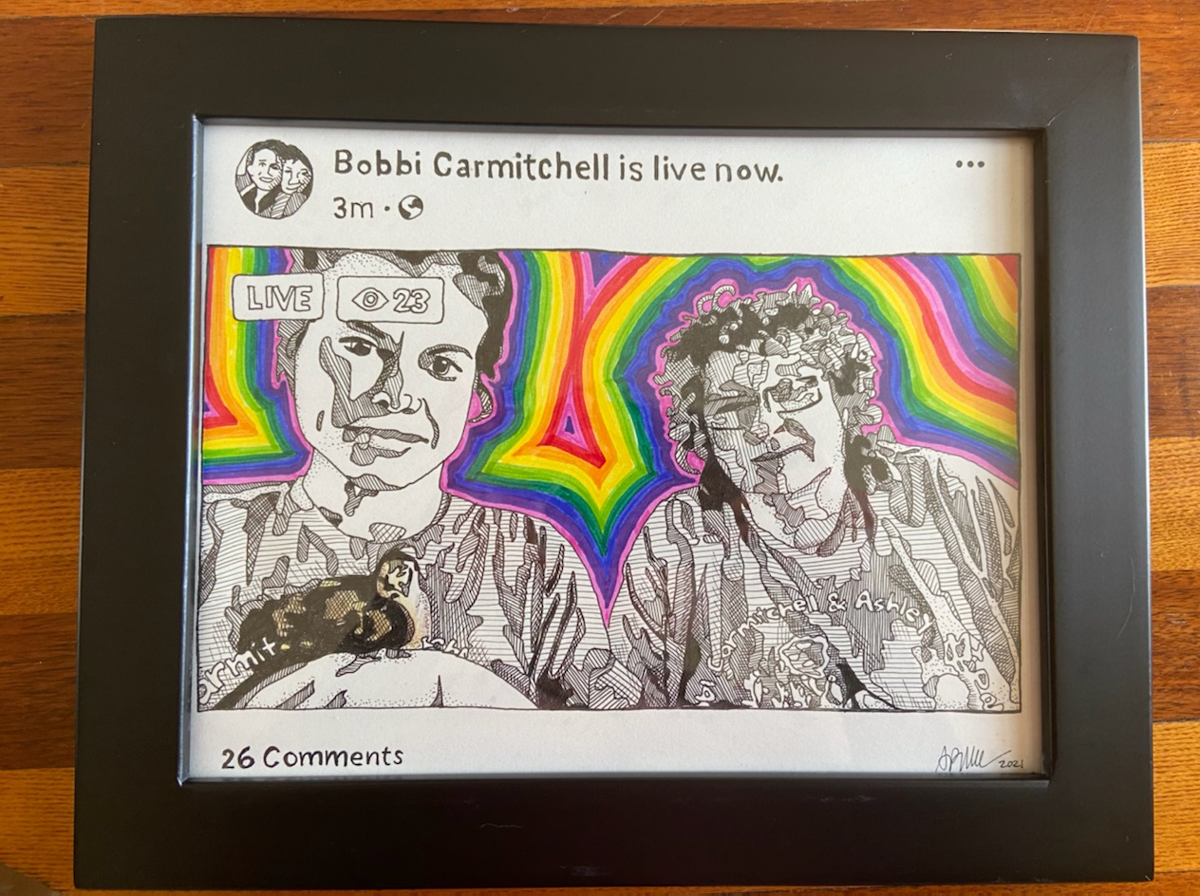 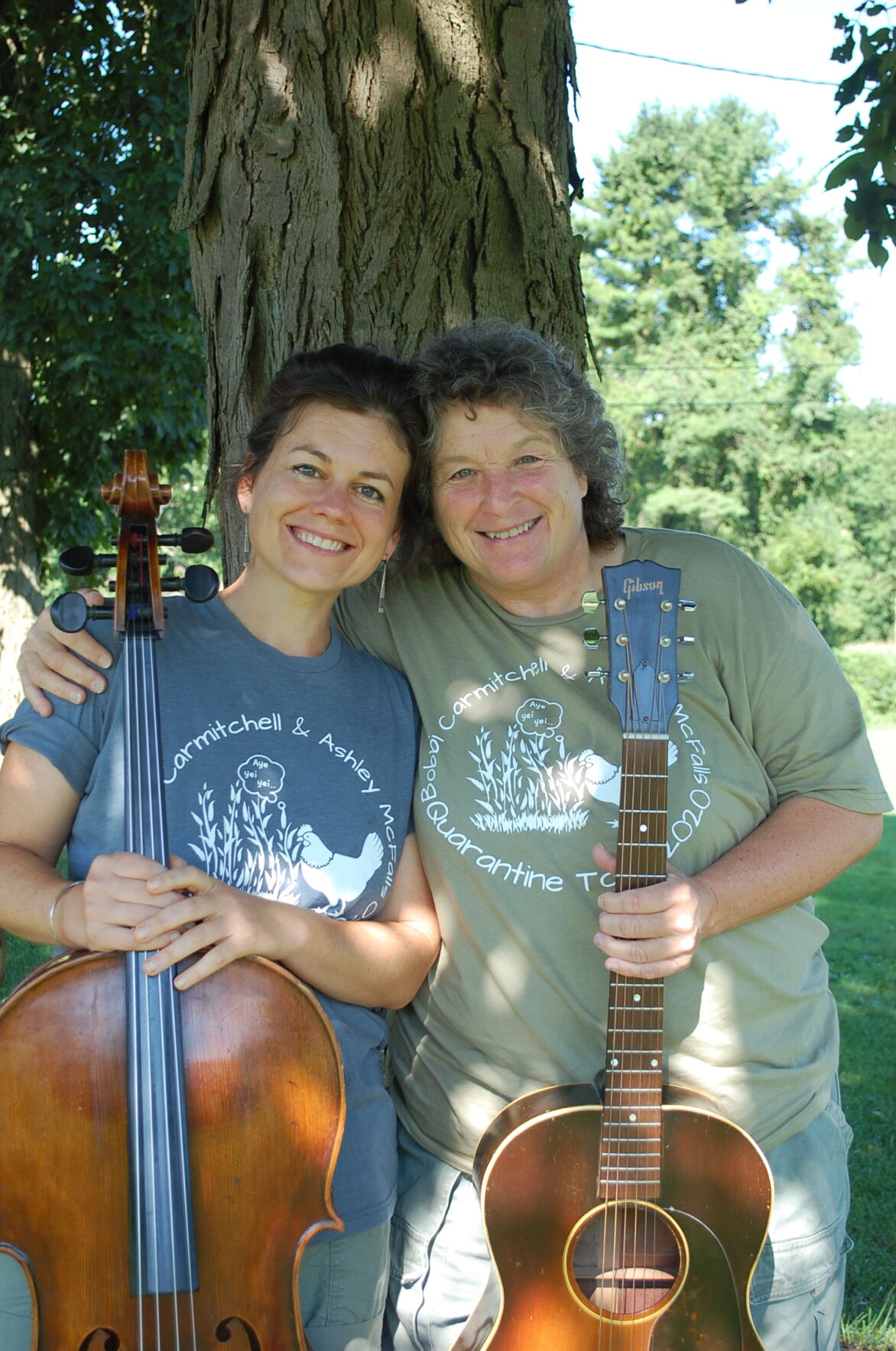 Bobbi Carmitchell and Ashley McFalls, pictured in the t-shirts created to commemorate the duo's daily livestream performances. Photo courtesy of the artists.

Bobbi Carmitchell and Ashley McFalls, pictured in the t-shirts created to commemorate the duo's daily livestream performances. Photo courtesy of the artists.

On March 13, 2020, local musicians Bobbi Carmitchell and Ashley McFalls set up a few mics and amps in their home to try out a livestream performance for the first time.

When COVID-19 initially closed music venues, Carmitchell, a four-decade songwriting veteran of the Lancaster music scene, and McFalls, a cello player who has played with local group Abigail's Garden, weren't sure when they'd play live in-person again. So they thought, why not play live on the internet for a while and see how it ends up?

On Jan. 6, the duo gave their 300th consecutive virtual performance on Carmitchell's personal Facebook page. Over the course of their 70-minute show, they averaged 82 viewers and wound up with over 800 comments.

The evening's show was a mix of folk favorites that Carmitchell and McFalls play frequently, such as Joni Mitchell's "Free Man in Paris" and John Denver's "Sunshine On My Shoulders." Other songs on the night's setlist referenced recent political events, with a brief nod to the Georgia senate races with a snippet of "Georgia On My Mind" and "This Land is Your Land," and the Indigo Girls' "Shame On You," which Carmitchell and McFalls said was in response to the insurrectionists who stormed the U.S. Capitol building only hours earlier.

With any sort of regularly scheduled event with dedicated fans, Carmitchell and McFalls' livestreams have certain beats that viewers can count on: saying hello to the dozens of people in the comments individually and by name, usually accompanied with a "Hey, how's your arm doing today?" or an "Oh jeeze, I'm so sorry to hear about your granddaughter." And of course, there's the race to see who will be the first to comment on the video, a virtual sprint usually involving a dozen or so of their most hardcore followers.

There isn't really the standard transactional relationship between musicians and "fans" happening here. The duo says they get just as much out of the performances as the listeners do.

“I think what happens when we play, because there’s two of us and we’re partners, is it’s a visit in a living room with two people who really love each other,” Carmitchell said in an August 2020 LNP interview, around the time the pair had reached 150 performances.

Performance times have changed throughout the duo's run, but currently, viewers can check out the daily concerts at 7 p.m. on Carmitchell's Facebook page, which can be found at facebook.com/bobbi.carmitchell.

Halfway through the 300th show, McFalls discussed some of the gifts they'd recently received from friends and admirers. She showed viewers a piece of fan art - a hand-drawn image of the two of them in that same rectangular video box they've been in for at least an hour for the past 300 days - by regular viewer Patty Wilson. McFalls read the letter that accompanied it, written by Sabrina Kreps:

“Bobbi and Ashley, as artists, you have given us all a gift during this pandemic, a gift of being witness to your unending talents, wit, humor, caring, support and love. The community that you are both the inspiration and caregivers for has been healing and uplifting in a time in our world history we never thought imaginable.

"I believe it has been therapeutic and validating, as so many are limited with human contact during quarantine. You feel seen, you feel heard, you matter. I hope when you look sat this piece of art in the years ahead, you remember what you did mattered most during the COVID-19 pandemic. You opened your hearts and created a safe space for us to gather online when we could not be together. Thank you for a magnificent 300 days. The best is yet to come."

In lieu of a 'Spotify Wrapped' list, a look at favorite musical moments from 2020 [Column]

Another year down, and another year where I’m inundated by my friends sharing their “Spotify…

When it comes down to it, was 2020 really a good year for anything? The most positive spin y…

It seems like a lifetime ago, but the first-ever Central Pennsylvania Music Hall of Fame too…

In-person events for the 2021 Rose & Shamrock Festival have been canceled, according to festival chairperson and Paloma School of Dance ow…

Zenkaikon in-person events canceled in 2021, will be held virtually

The organizers behind Zenkaikon have announced that the event won't be having any in-person events this year.