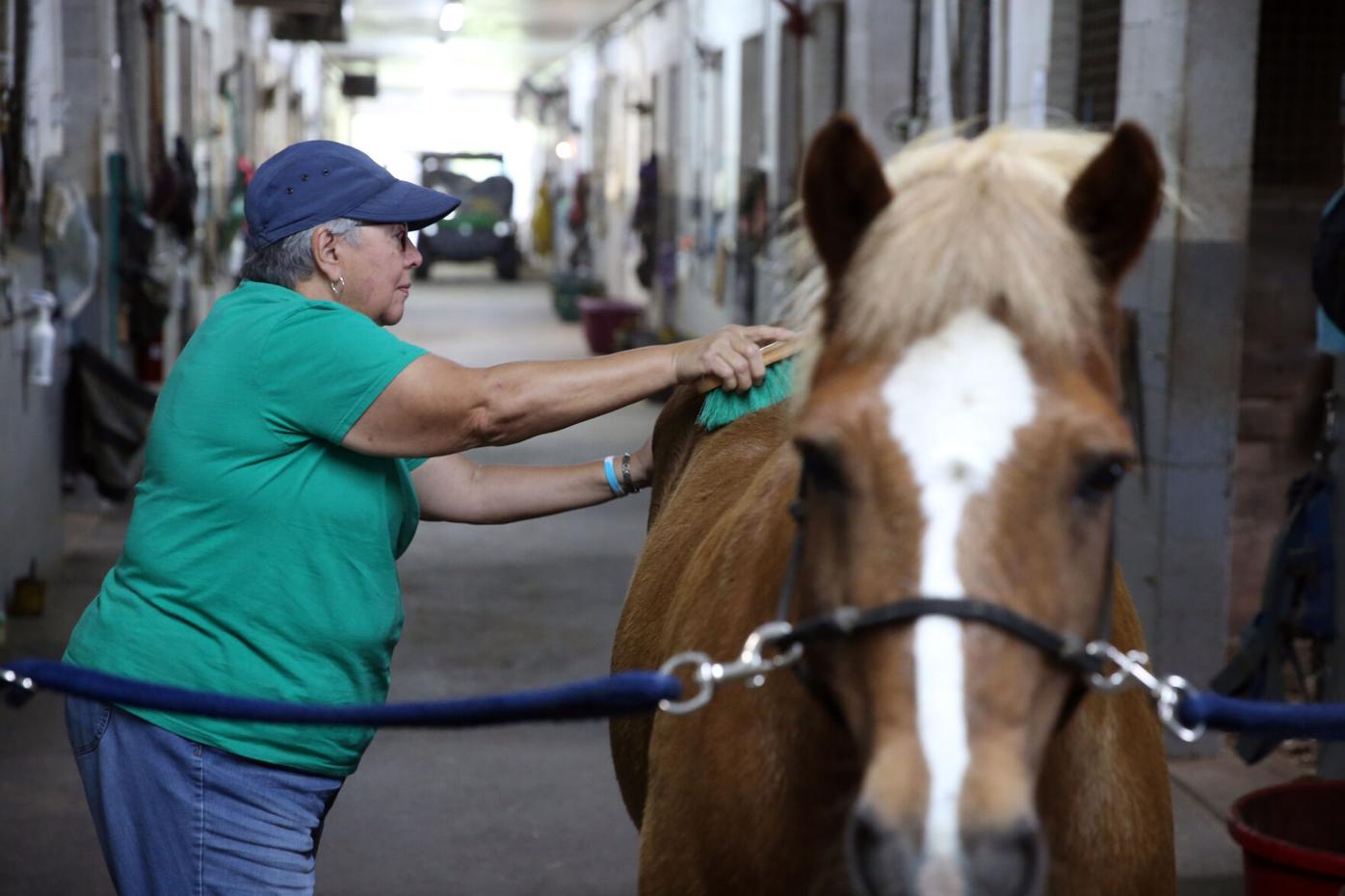 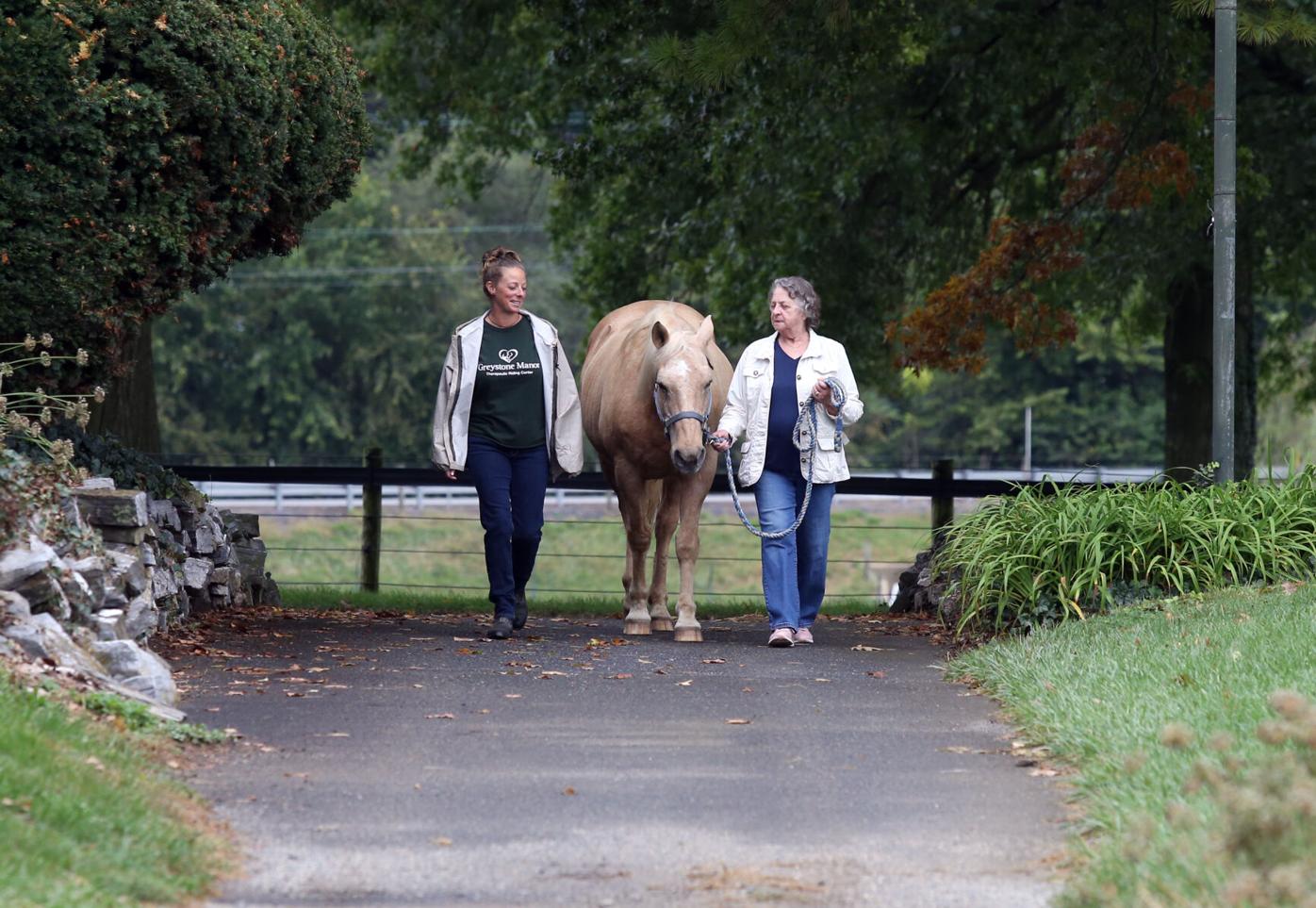 Instructor Krisinta Weaver, left, walks with her grandmother Naomi Strothers as they lead Neptune from the pasture during a Silver Saddles program at Greystone Manor Therapeutic Riding Center in Lancaster on Tuesday, Oct. 5, 2021. 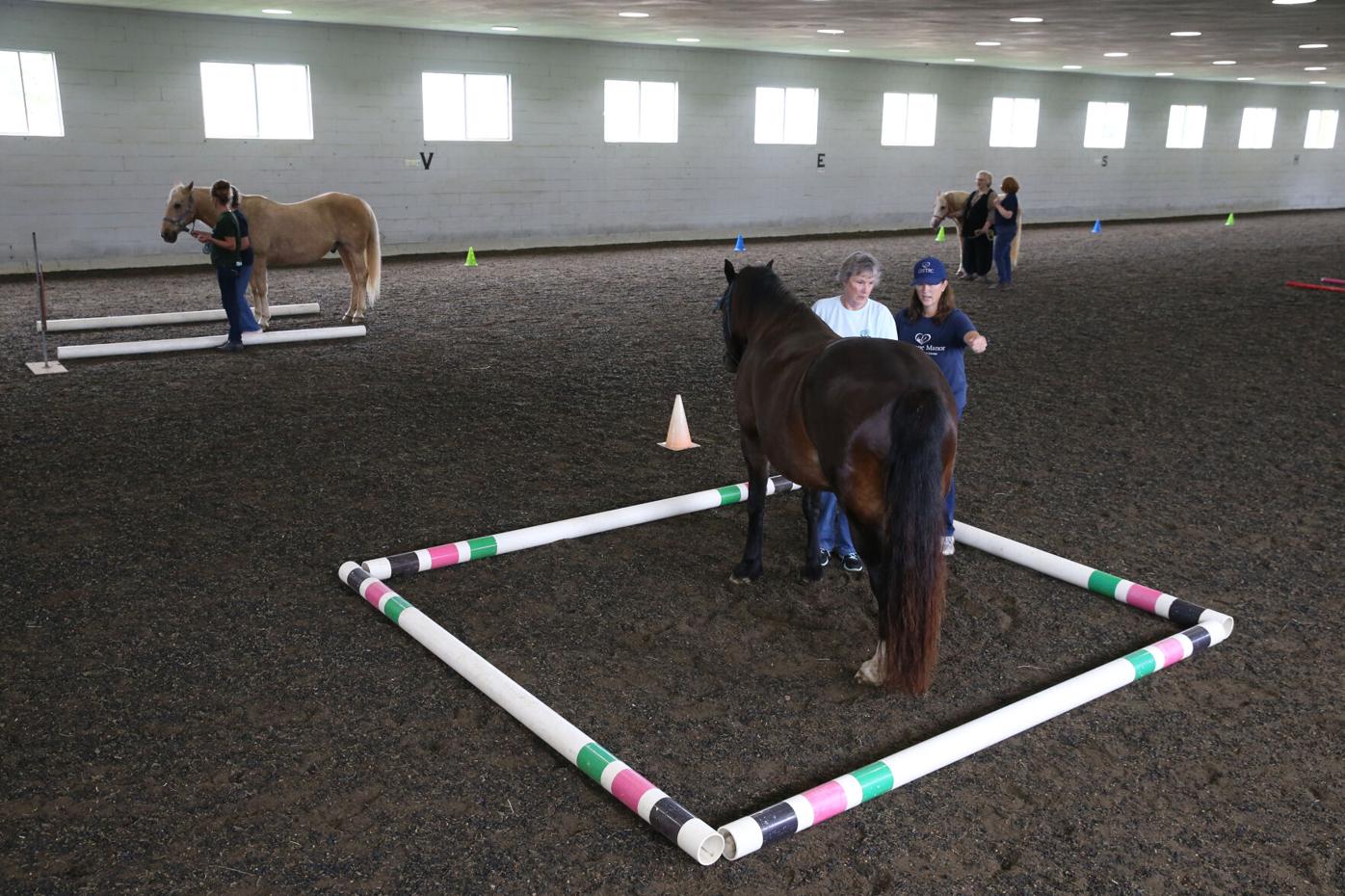 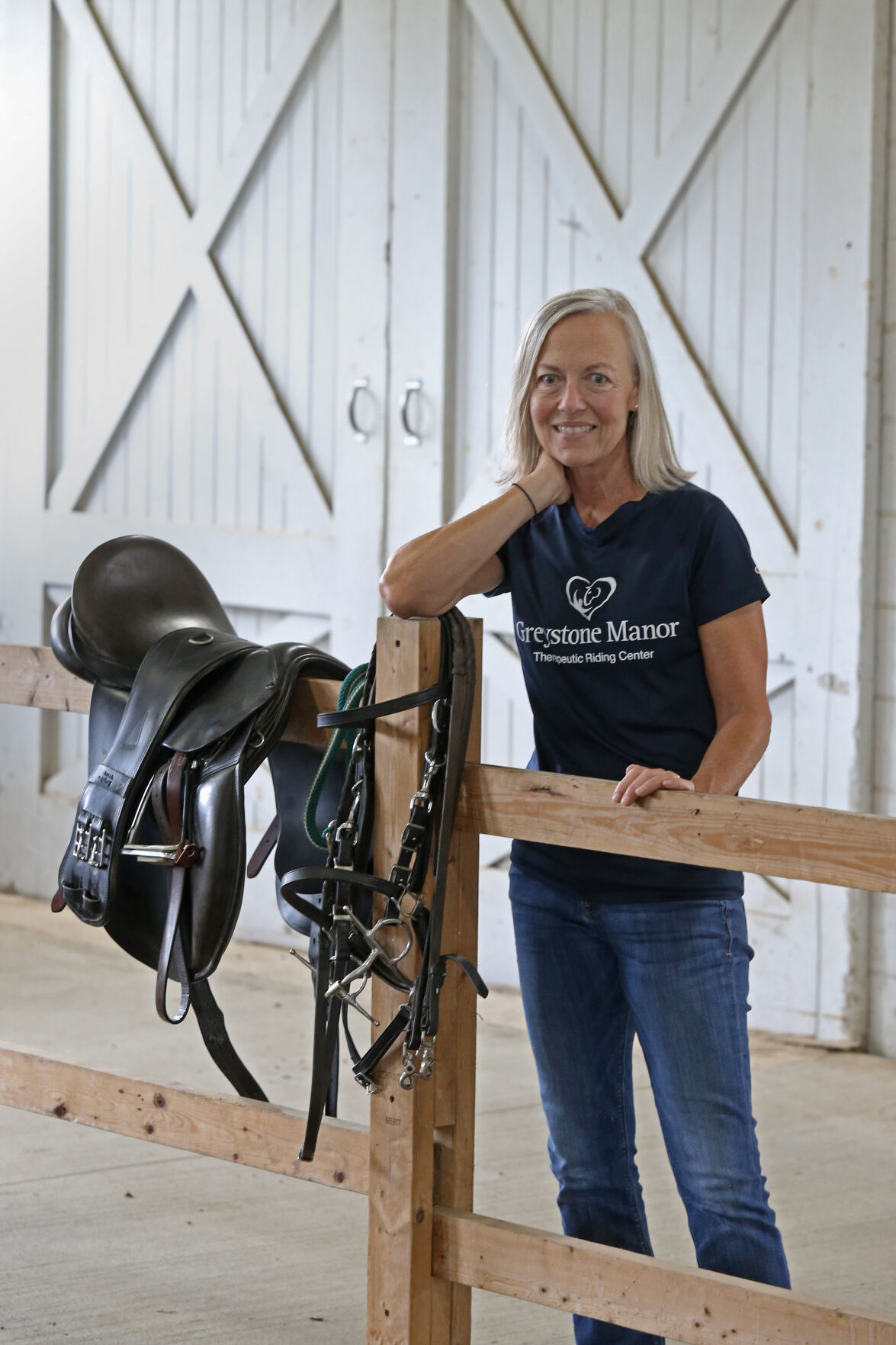 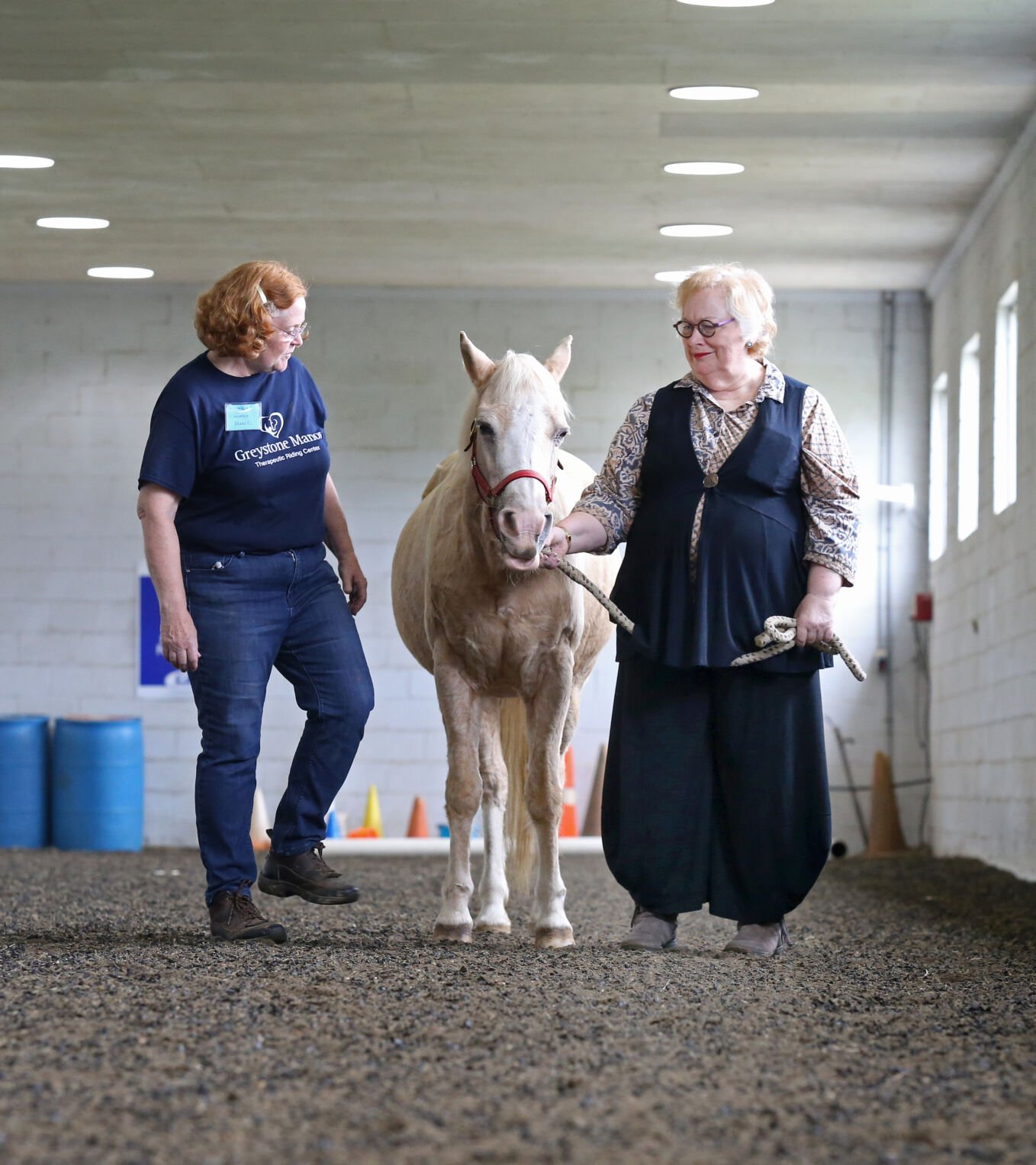 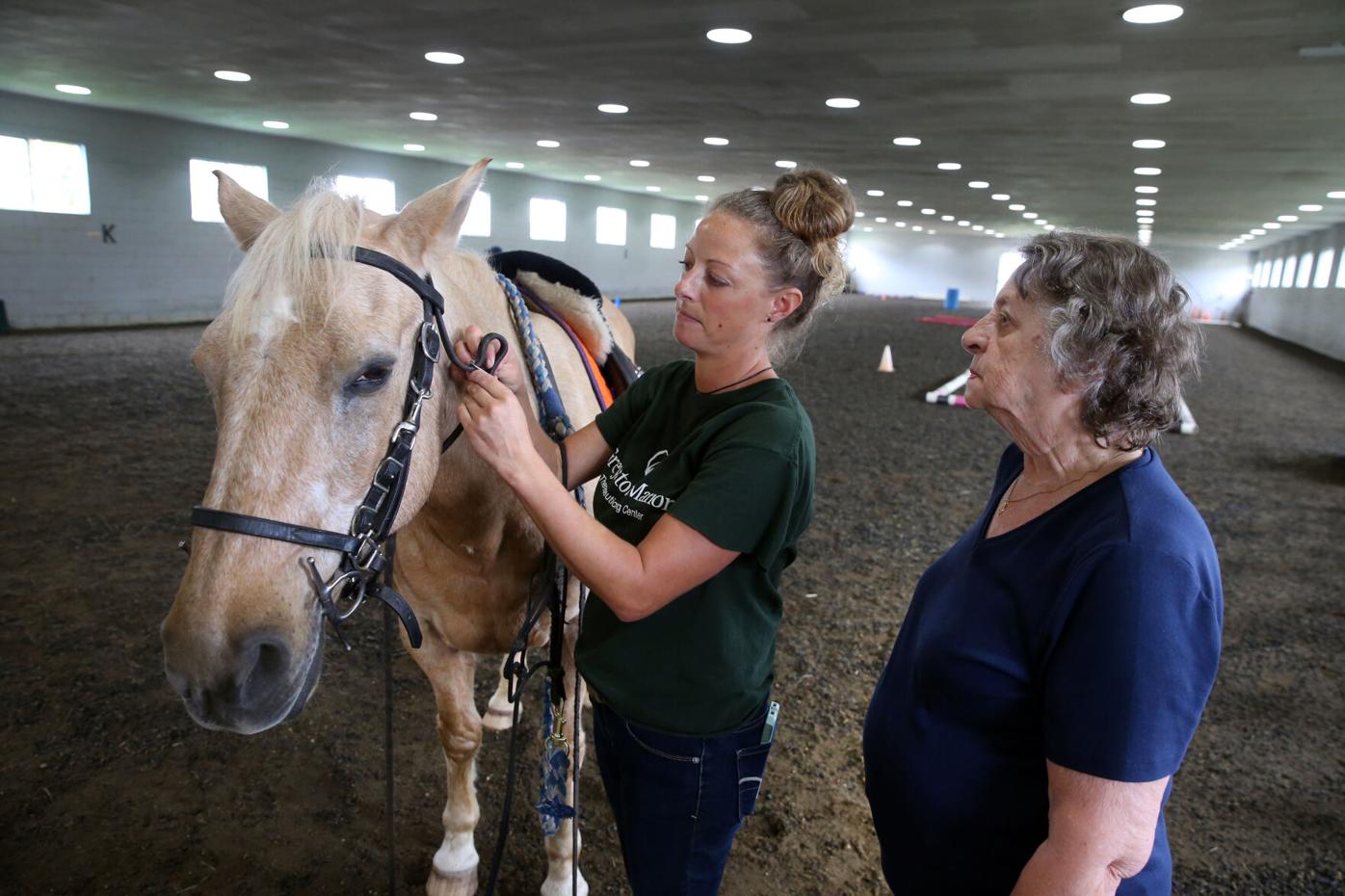 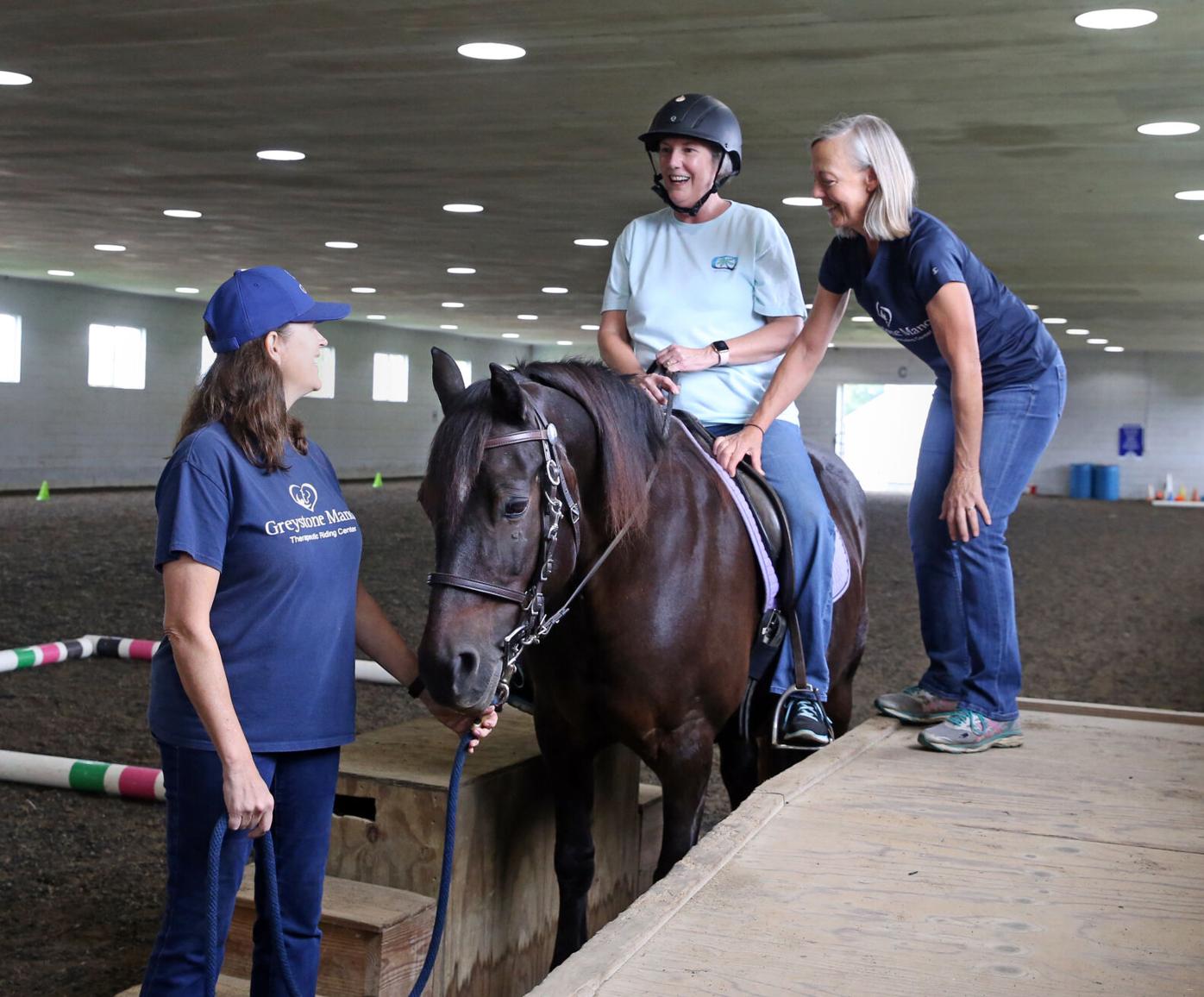 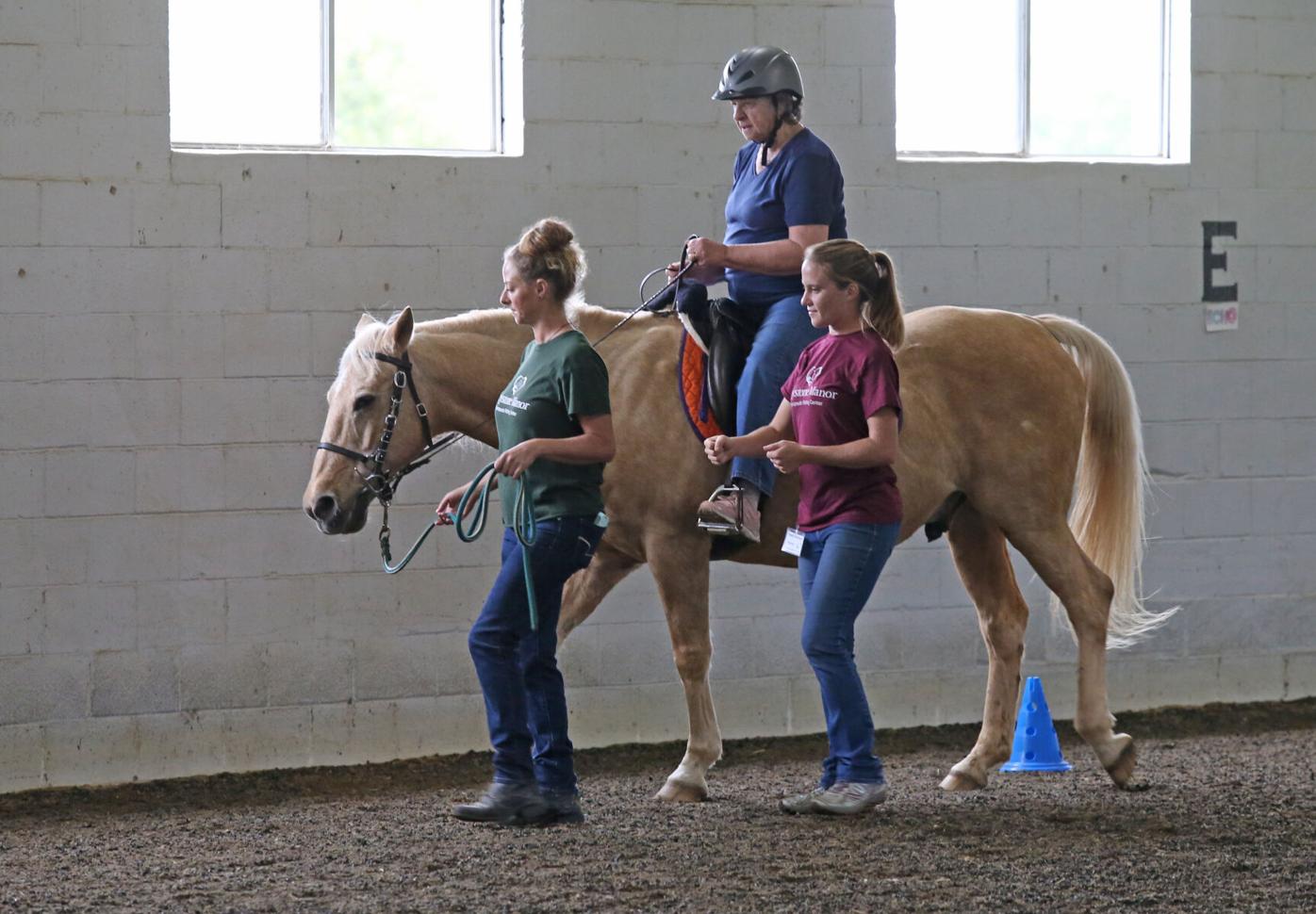 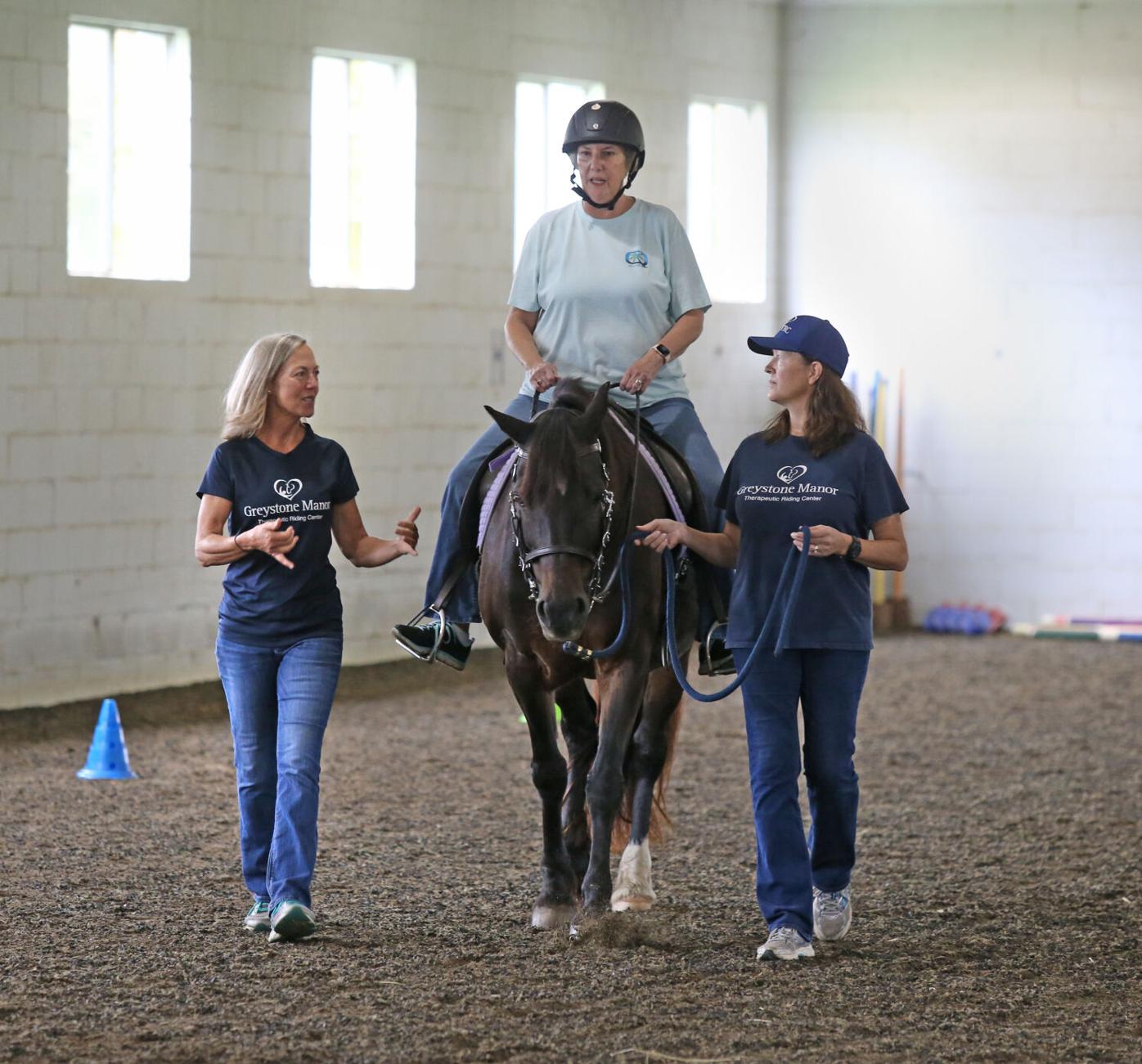 Instructor Krisinta Weaver, left, walks with her grandmother Naomi Strothers as they lead Neptune from the pasture during a Silver Saddles program at Greystone Manor Therapeutic Riding Center in Lancaster on Tuesday, Oct. 5, 2021.

If a picture is worth a thousand words, then a recent snapshot of Landis Homes resident Susan Fast and a Welsh Cob pony named Little Lacey speaks volumes.

In the photo, Fast, 75, is smiling contentedly as she rests her forehead against Lacey’s cream-colored mane and curls her arm gently around the horse’s neck.

Fast, who grew up as a city girl in New Jersey and later lived in San Francisco, moved to Landis Homes three years ago. While she says the move to Lancaster County has been a very good one, the pandemic took its toll.

“I don’t have any pets,” Fast says. “When COVID hit, we weren’t allowed to hug anything.”

So when Fast learned of a program called Silver Saddles through the Pathways Institute of Lifelong Learning, she jumped at the chance to make that much-needed human-animal connection.

“I’ve given lots of big hugs,” Fast says of her time in the four-week program this fall. “It’s satisfied a couple of things.”

Developed by staff at Greystone, Silver Saddles is a program for seniors 55 and over that gives participants the chance to experience the horse-human bond while learning grooming, leading and natural horsemanship skills as well as the basics of equine behavior.

While Greystone is better known for its equine-assisted activities for children and adults with special needs, Silver Saddles is a way to extend the center’s mission, says instructor Linda Leiden, who developed the senior program with fellow instructor Deb Jeffrey.

“We wanted to utilize the horses in a light way and also extend the program out into the community,” Leiden says. “There’s such a large senior population in Lancaster County. … I just know as you get older and lose friends or kids move away … the social, emotional, physical, cognitive stretching needs to keep happening to feel young, no matter what’s happening to your body.”

The sensory nature of horses makes them the perfect vehicle to do just that, Leiden says.

“They’re extremely honest,” she says. “We tend to be incongruent. We tend to say one thing when we’re feeling something different. That doesn’t work with horses. You have to be connected, and that’s really healthy for us humans.”

Silver Saddles connected with the Pathways Institute for Lifelong Learning with a little help from Diane Garrett, a volunteer at Greystone Manor who also happens to be a resident of Landis Homes, a hosting site for the Pathways program. While many of the 40-55 courses offered in the fall and spring are lecture-based, Silver Saddles offers an enrichment opportunity that perfectly aligns with the Pathways mission, says Pathways director Anastasia  Petrovskaya.

“We look at a person who is body, mind and spirit altogether,” she says. “It’s not just learning information like lectures. It’s also providing experiential opportunities where participants can engage and fully learn using their senses and also practice what they learn.”

After delays due to COVID-19, Silver Saddles got out of the gate slowly this spring, with an initial group of four participants. A second session was held this fall. The group meets once a week for an hour and a half. Although it’s an unmounted program, participants have the option of riding during the fourth and final session.

The program begins with a walk-through to meet the horses at Greystone, with staff pairing participants and horses based on a variety of factors, from size to personality. All participants are also paired with a Greystone volunteer.

The curriculum is a blend of equine history and education and activities that progressively deepen the relationship between human and horse. Participants learn about horse care, safety, grooming and massage, how to apply and release pressure to get their horse to work through a showmanship pattern, how to be mindful of relaxation and breathing, and how to become in tune with what their horse is feeling.

“Horses, as herding animals, are always seeking to be comfortable. They’re very honest, they’re very sensory and in tune to our sensory way of being,” Leiden says. “They will show us, the way they move their body, if we’re approaching them in a connective kind of way. It’s very rewarding.”

The curriculum is purposely loose, Leiden says, so instructors and volunteers can observe and take cues from what happens in class, and take detours if necessary.

“What I enjoy with groups like this is there’s a different takeaway with each participant,” says Stephanie Fleck, Greystone Manor program director. “It’s not a cookie-cutter activity.”

For some, the program offers physical exercise. For others, it’s social or emotional engagement. Still others enjoy the cognitive benefits of learning something new.

The four women who completed the most recent fall session had different motivations for participating.

Susan Fast was looking for that emotional connection, but she also wanted to learn more about an animal that has always captured her fascination. Fast learned how to ride at camp when she was 14 and recalls having her horse roll as she led it back to the barn. She was left with the dirty job of cleaning its saddle.

“They know their weight and their power,” she says. “That stuck with me.”

Julie Wise, 62, of Millersville, also rode as a teenager and signed up for Silver Saddles to get reacquainted with horses.

For Pam Neidig, 72, of Washington Boro, getting up close and personal with a horse was a new learning experience that checked an item off her bucket list.

“This is something organized,” she says of Silver Saddles, “not just me walking up to a horse at the neighbor’s farm.”

Naomi Strothers, 82, of Ephrata, joined Silver Saddles to overcome a lifelong fear - at the urging of her granddaughter, Kristina Weaver, a program and volunteer assistant at Greystone. Some 70 years ago, while Strothers was riding in a car with her sister, a spooked horse ran on the road and crashed into their windshield. Years later, she encountered five mules in the middle of Main Street in Terre Hill while driving home from work late one night.

“I thought, ‘I’m getting older. I’m not doing this anymore. I’m not going to be scared of horses anymore. It’s time to get over that,’ ” Strothers says, adding, “I feel so much more comfortable with them.”

In the final session of Silver Saddles this fall, Strothers’ newfound comfort is on full display as she picks up the hoof of an energetic quarterhorse named Neptune to clean it of dirt and dust.

Nearby, a Welsh Cob named Violet dozes off as Wise brushes her forelock and mane.

“Grooming is a great introduction for them,” Fleck says. “It’s just a confidence builder.”

Leiden notes that the horses are ground-tied, meaning they are standing still on command without actually being tied to anything.

“If the horses didn’t feel safe they wouldn’t stand. They could choose to walk away,” she says. “The fact that they want to be with us is incredible.”

Obviously, not just any horse is suitable for such therapeutic programs. Generally, they look for horses that are “uncomplicated,” have a low flight response and a nice gait, Jeffrey says, adding they also want horses that have personality, want to engage and are not overly sensitive.

But even these horses, just like their human partners, have their own idiosyncrasies.

Bailey, a Halflinger cross, is built to pull and tends to be a bit more stubborn, Leiden says. He needs someone with gumption, but he connects well socially and emotionally.

“His partnership with Pam is really good,” Leiden says. “She’s not afraid to ask him to do something.”

Toward the end of their final session together, Pam breaks into a light jog on foot as she leads Bailey around the arena.

Wise and Strothers have chosen to ride, so their volunteer partners take them through the process of saddling their horses. Weaver admires how her grandmother looks in a helmet before helping her onto Neptune. Both women are all smiles as they take their horses through several maneuvers, always flanked by volunteers and staff.

When someone asks how it feels, Wise responds, “Like 45 years ago.”

After her ride, Strothers dismounts with some help, and a little giggle, as her feet finally hit the ground.

“Wonderful,” she says. “I really enjoyed it.”

With Little Lacey back in her stall, Fast reflects on the past four weeks, that familiar contented smile on her face.

“I was told right off the bat she is face-sensitive,” Fast says of Lacey. “She let me do her forelock and touch her cheek and I felt really gratified that she was comfortable with that. It was a real treat.”

Garrett, the Greystone volunteer who served as Fast’s partner for the four-week session, is also the one who captured that touching moment between Fast and Little Lacey on her phone.

“There’s something about horses. They are so good for the insides of us,” Garrett says. “Little Lacey was a perfect match for (Fast). They really bonded.”

Fast has a theory about that.

Lacey is 25, which in horse years, Fast says, makes them about the same age.

“Two old girls together,” she says.

Founded in 2005, the Pathways Institute for Lifelong Learning is a program of Messiah Lifeways for those 55 and over. While Landis Homes serves as a host site in Lancaster County, the program is open to the public.

The Pathways program offers a spring and fall term each year modeled after college-level courses. Classes are taught by current and retired educators or experts in a particular field.

Each term, Pathways offers about 50 courses with more than 500 participants.

Greystone Manor Therapeutic Riding Center is considering expanding its offerings in the future, instructor Linda Leiden says. Although the Silver Saddles horsemanship program is open to both men and women, only women signed up for the spring and fall term this year, leading to thoughts of a Silver Cowboys program exclusively for men, she says.

A number of participants in the inaugural session also have requested a riding program. Other possibilities include a horsemanship program for those with mild dementia.

Whatever the future holds, Leiden says she’d like to see the horse-human connection last long after the four-week session ends. The hope is that participants will return to Greystone as volunteers, or simply to attend the center’s horse shows and galas.

“We want the Silver Saddles group to maintain their relationship with our community no matter how it looks,” she says.

To learn more about the Pathways Institute of Lifelong Learning, email info@thepathwaysinstitute.org, call 717-591-7213 or visit ThePathwaysInstitute.org.

Heart disease is the leading cause of death for men and women in the United States.