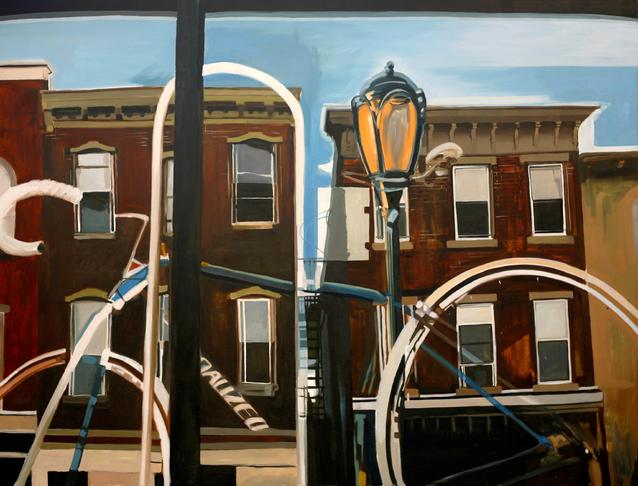 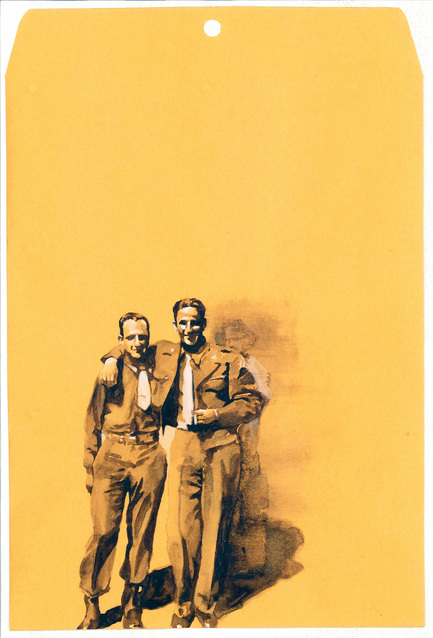 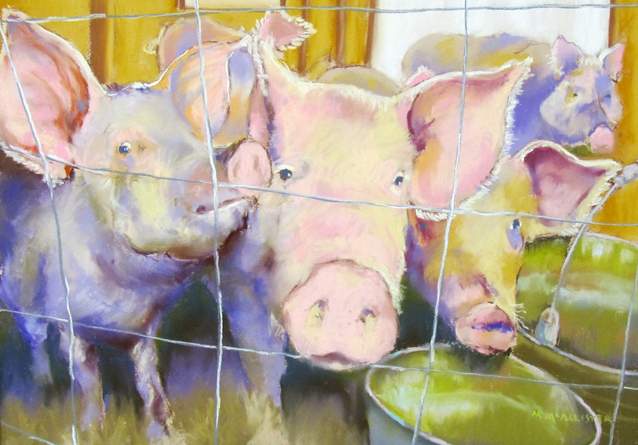 This month, the men have it at Red Raven Art Company.

The January exhibit is "Man Up," an all-male revue of talent from four seasoned artists and one emerging artist, all geared up to show the male perspective when it comes to art.

"I wouldn't say that my art is necessarily recognizable as male, but it does tend to be sharp and more angular than a softer, more organic style," says artist Robert Libby. "I think I come from a more engineering, architectural perspective, which might be considered more masculine."

Libby is joined by featured artists Scott Cantrell and Michael McAllister, along with highlight artist Barry Root and emerging artist Jason Rowles. The Man Up exhibit will run through Jan. 26 at Red Raven.

Each year, Red Raven features a women's exhibit, and the Man Up exhibit offers the guys a chance to shine.

In many ways, there is a definite sense that the art is done by men, mostly because of subject matter. There are architectural paintings, cars, machinery, photography, bicycles and images of male bonding.

"I guess you could say it's a guy's show," says Cantrell, who is fond of capturing the past on canvas.

His painting "Past, Presents #73" shows two soldiers together, obviously bonded through their wartime experiences. He uses a bold golden yellow wash of color to offset the sepia tone painting of the soldiers in their olive drab uniforms.

Cantrell also looks back at lost technology, with a Polaroid camera next to an instant snapshot taken with the now-extinct camera. Titled "DOA 9," Cantrell views a form of photographic technology that once seemed so vibrant and trendy, then became obsolete.

"I work mostly with traditional art materials such as pencil, paper, paint, canvas, photo and ink, referentially commenting on the illusions created with these materials," Cantrell says. "I am always being reminded that memory is fleeting and that it is completely individual. Driven by the fundamental fear of forgetting, ultimately a fear of death, my work is part of a grieving process personal and historical that seeks for some kind of resolution."

"In my work, I look at the reflective surfaces as they create their own worlds," Libby says.

His painting "Can't Stop" has all the guy elements of shiny chrome and lacquered black in a vintage automobile. The reflections play off each other, from the car to the store front window to the windshield glass, until it is nearly impossible to tell what is real and what is a reflection.

He employs a similar technique in "I Can See for Miles and Miles and Miles," with a shiny Specialized bicycle next to a lamp post with a row of buildings that create reflections from their windows above the urban landscape.

"In the reflected, the transparent, and the glass, there abstract worlds that exist in every moment of every aspect of life," Libby says.

Michael McAllister is the most seasoned of the Man Up artists, having been a professional artist for more than 50 years. He splits his time between working in his studio in Yardley, Pa., and painting in Todos Santos Baja, Mexico.

"My goal in painting is to interpret my very personal reaction to a scene or object so that the viewer also forms a reaction which, while not necessarily the same as mine, is no less personal," says McAllister, listing his influences as artists Edward Hopper and Wolf Kahn.

Like some of the other guys in Man Up, McAllister enjoys painting old vehicles. His images also contain elements of plein-air landscapes, as in "Victorian Reflections," a painting featuring a glossy black antique car bumper that reflects trees, sky and a row of gingerbread architecture. He also has some fun on the farm with his comical pastels portrait of three pink and cream pigs in "We're All Ears."

To round out the all-male cast of characters, illustrator Barry Root is the featured artist with his big, bold visuals of city scenes and slice-of-life images of people. He has illustrated children's books with his vibrant style, including "Dream Big: Michael Jordan and the Pursuit of Olympic Gold" and "Passing the Music Down." Emerging artist Jason Rowles is a recent graduate of Kutztown University, with his intriguing paintings of colorful graffiti amid urban decay.

"My fascination with graffiti has taken me to many places that have long been forgotten by society," Rowles says. "I study the abstractions painted on the walls of abandoned factories and defunct warehouses and amusement parks in hopes to better understand their often-cryptic messages."