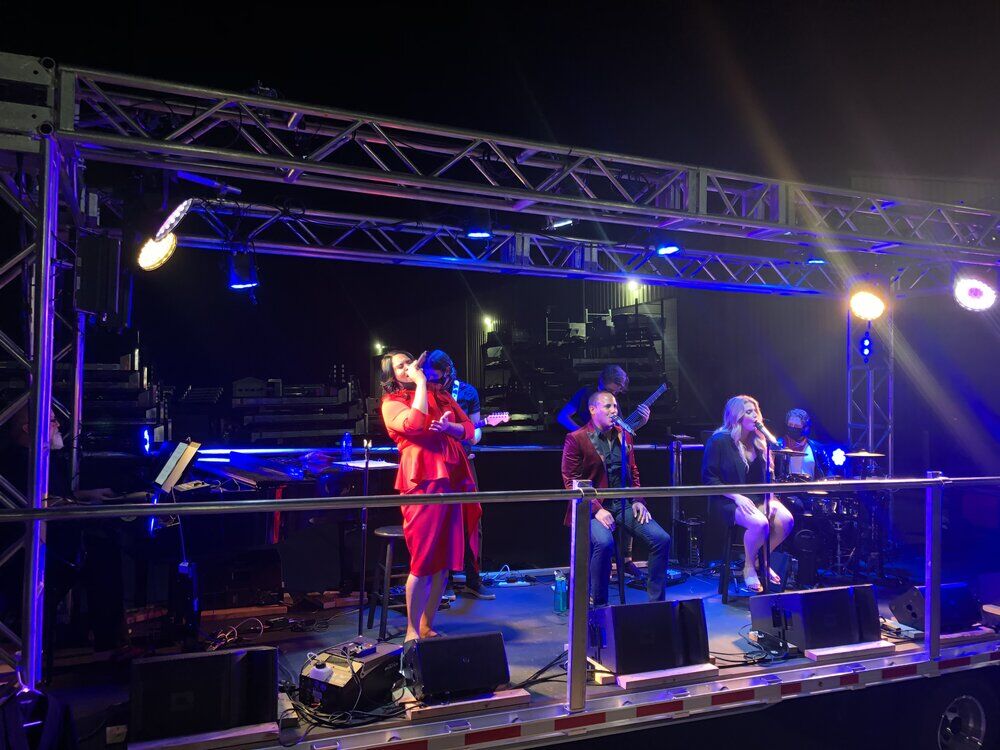 Prima musicians performing during one of the theater's outdoor shows in 2020. Photo courtesy of Prima Theatre. 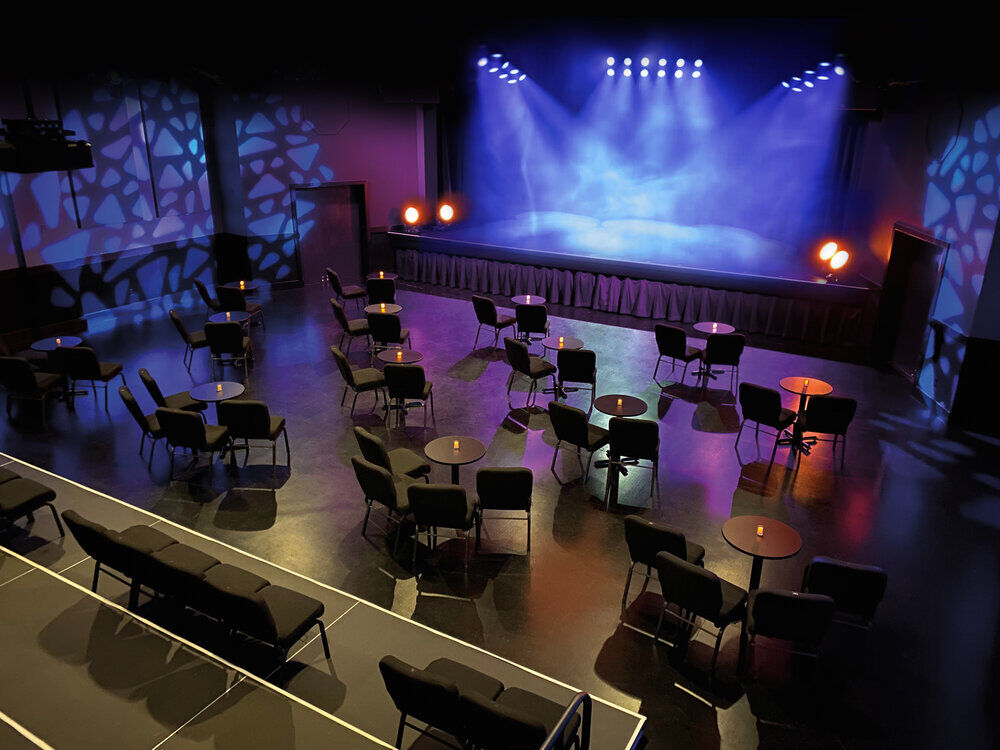 Prima musicians performing during one of the theater's outdoor shows in 2020. Photo courtesy of Prima Theatre.

When you gather together a school administrator, health professionals and local leaders, who wins in a fight? Maybe that’s not the right question.

When you gather together a school administrator, health professionals and local leaders for a virtual singing competition and fundraiser, who wins? If you ask Prima Theatre founder and artistic director Mitch Nugent, well, everyone does.

The event, which takes place at 8 p.m. Friday will be free to stream on demand Valentine’s Day weekend (Feb. 12-14). There is also a VIP option, which includes a gift basket of items from local businesses, as well as an invitation to watch a virtual chat between Nugent and Broadway star Adam Pascal, for $150.

“The last thing we all need is another boring fundraiser, right? So how can we make it fresh and theatrical so that it feels like Prima?” says Nugent of the theater’s first big event of 2021. “The concept of a lighthearted friendly competition is something that is oh so American, right?”

The event will be hosted by new Prima board member Thaddeus Lee, a Comcast vice president who managed to sidestep the singing aspect of the event.

“I told Mitch, ‘You know what? I don’t know that I can get up and sing and compete,’ ” Lee says with a laugh over the phone. “I don’t think I’d raise enough money, so I think they got the right people.”

The event follows a year filled with the specific type of scrappiness that Prima Theatre has exuded in its decade of operation in Lancaster city. As with any real boxing match, there are some ringers — for example, Manolas once performed at Veteran’s Stadium in Philadelphia with the University of Pennsylvania Glee Club, and nearly all of the “competitors” list themselves as longtime fans and patrons of Prima’s efforts.

“There’s a novelty to seeing local leaders stretch beyond their comfort zones at a time in which, goodness, even with pandemic standards, is anything but comfort zones these days,” Nugent says. “For them to do that, it’s almost like going to the circus, it’s entertainment a little out of your normal day-to-day operations. These five folks were courageous enough to put their necks out for an organization that they have a heart for. The kudos goes to them.”

By and large, 2020 served as a return to Prima’s nomadic roots. Though the organization has had a permanent home at 941 Wheatland Ave. since 2018, Prima players performed everywhere but on their own stage over the last 10 months. Instead of people traveling to the theater, the theater traveled to hundreds of Lancaster residents by way of home concerts, drive-in concerts and parade caravans through the city’s streets.

“I say this a lot, but the currency of the future is agility, and Prima has certainly demonstrated that,” Lee says. “They have been nimble, agile and adaptable, and that to me is going to be a core tenet of any organization or business that needs to be successful in this type of environment where we have things that are beyond our control. I think Mitch has demonstrated an uncanny ability to recognize when those pivots need to happen. And to me, the caroling was an example of that, the ‘Brave and Beautiful’ show was an example of that. Taking the art to the people is something that he’s not shied away from.”

Prima’s 2021 schedule is a mix of the popular and the personal, filled with music that intends to appeal to “whatever end of the political or demographic spectrum you are on,” according to Nugent.

In March, Prima will premiere “Sammy & Sinatra,” a tribute to two of the most famous members of the Rat Pack, Frank Sinatra and Sammy Davis Jr. Nugent says the original show will touch on how the duo’s relationship weaves through pop culture, politics and prejudice. Currently, the plan is for “Sammy & Sinatra” to swing its way through the bustling streets of Lancaster city in a classic car during the first three weekends in March.

“When you pull up with a car in front of someone’s house and see 75 people coming out of their homes, socially distanced but there, you feel like something is happening,” Nugent explains. “It’s tear-jerkingly beautiful when you get a bunch of neighbors out who haven’t been outside. Or businesses. People spend so much money on their holiday parties and staff appreciation luncheons and no one knows what to do with those. But if you can get your neighborhood or staff together outside for 15 minutes of pure existential glory, it’s like a flower that blossoms."

“You know it’s not going to last forever, but it’s still beautiful and memorable,” Nugent adds. “Life’s greatest moments are those little blips that we share with others. You don’t remember the TV series you binged last month, but you do remember those shared experiences.”

The million-dollar question — whose price seems to tick up incrementally as the pandemic continues — is when patrons will be able to experience shows in the theater again. The normally 250-person venue can now seat 70 comfortably, thanks to the new slate of private tables that will be the functioning normal for the foreseeable future. In June, Prima premieres a tribute to the music of Queen and Journey, which you will potentially either hear echoing through the streets downtown, or, if Nugent and Prima get their way, in a comfortable seat on Wheatland Avenue.

“Our absolute dream would be to do Queen and Journey in the theater. Do I have an expectation that will happen? Nope!” Nugent says. “Even if things are ‘legal,’ there’s the difference between what is physically, health-wise safe and the psychological preparedness. I think the reality is in the fall.”

The virtual “Stage Brawl” event, while not featuring any participants who would list “singing” as the first, second or even third most prominent part of their respective resumes, exists to propel Prima forward into 2021. Nugent says he’s not worried about what the future holds because of the resourcefulness the theater has shown both in the last decade, and more specifically, the last year.

“I think in a time like this, it’s easy to forget that there’s beauty in the world. I mean, we had COVID, we had the racial and civil unrest in our society,” Lee says. “You talk about people feeling down and blue ... music is a language that everyone speaks, right? If you want to hear something that is going to lift your spirit, music does that for you.

“These artists have found a way to keep us engaged,” Lee adds. “I feel like so often, we get stuck in a tunnel of darkness, and I think music is a way to bring us to the light.”

Ephrata Performing Arts Center survived a flood, a fire and a pandemic in 2020, and the vene…

For four decades, if you were driving to 121 W. Frederick Street in Millersville, it was to …

Thirty-five years ago next month, my brother and my dad helped me lug an old blue sofa, a de…

I’ve been admiring stately tundra swans at Middle Creek Wildlife Refuge this winter, as I have the last several winters. And seeing them remin…

Dolly and Porter. Loretta and Conway. Brett and Stephanie?

If you're tired of being on Zoom for meetings at this point, imagine having to spend 24 hours using the platform.