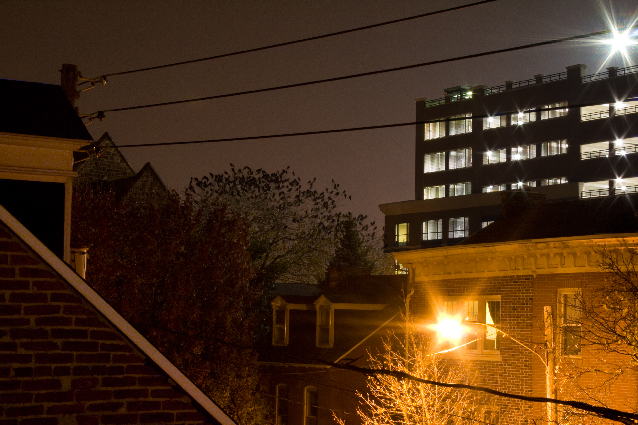 Crows fill a tree in a city nightscape in a photograph by A.J. Nutter, part of an exhibit opening at the Painted Desert Gallery tonight. (A.J. Nutter) 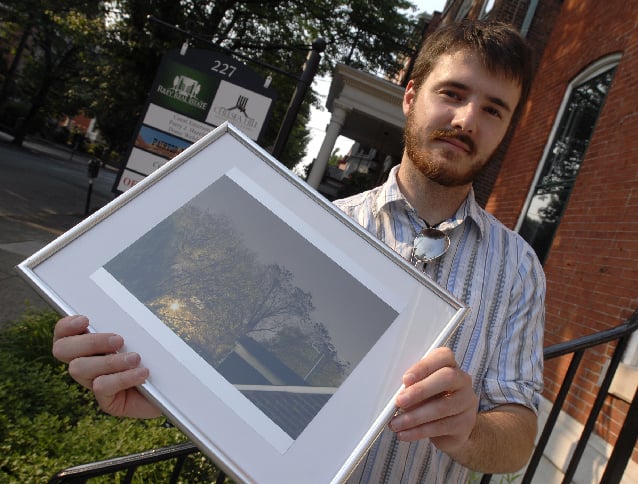 A.J. Nutter is shown outside the Painted Desert Gallery on Duke Street with one of his photographs. (Justin David Graybill)

Crows fill a tree in a city nightscape in a photograph by A.J. Nutter, part of an exhibit opening at the Painted Desert Gallery tonight. (A.J. Nutter)

A.J. Nutter is shown outside the Painted Desert Gallery on Duke Street with one of his photographs. (Justin David Graybill)

Admit it. Every time you see a flock of birds land on telephone wires or, worse yet, on a swing set, a little part of your brain thinks about "Alfred Hitchcock's The Birds."

The Painted Desert Gallery, 227 N. Duke St., will be offering two showings of the film with a new soundtrack written by musician/artist A.J. Nutter Friday at 5:30 p.m. and 7:40 p.m.

"I had seen it and enjoyed it, but I wasn't obsessed with 'The Birds,'" Nutter says. "There were other Hitchcock films that were more famous, like 'Psycho' and 'North By Northwest.' But working on this project gave me a whole new perspective on the film."

While Nutter always loved Hitchcock, it was actually the 2003 movie, "Open Range," with Robert Duvall and Kevin Costner, which got this project rolling.

No, there was not an attack bird in the film, but there was, according to Nutter, a very bad film score.

"I thought the soundtrack was so awful and I thought I could write one," Nutter says.

He looked for movies that didn't have musical soundtracks and one of them was "The Birds."

"It has sound effects. I suspect they thought it would be more dramatic with just bird sounds," Nutter says.

He watched the film and found it held up pretty well as a thriller. He especially liked the fact that there were no computer-generated special effects.

"It had a little bit more reality to it," he says.

Nutter mainly used a wire organ, which is a manipulated computer sound. "It sounds very much like an organ," he says. "The sound is more eerie."

Nutter learned not to overdo the soundtrack, discovering that too much music could take away from scenes. Silence was sometimes the most dramatic quality to a scene.

"I wrote a lot of music and played around with it a lot," he says, noting that as he tinkered with it, a lot of the music was cut out.

He likes the results.

"It was surprising how well some of the tracks fit into certain scenes," he says.

Because of royalty costs, there will only be two showings. While there is no admission charged, Nutter says donations to the project will help create a limited vinyl release of the soundtrack. Details will be available at the gallery.

Birds are also the subject of Nutter's photo and video exhibits at Painted Desert.

"We will be screening the film in one room and in the other room, prints and a video installation will be on display," Nutter says. "The large majority are crows. I have been documenting them for a while."

The photos were taken at night with long exposures. Many were taken near his apartment off of Duke and James streets, near the cemetery.

"It's interesting, especially here in the city, that there are so many of them. They like being close to light and street lamps."

Nutter reports no mysterious attacks or nasty pecking like in the film, but he did note that his car was assaulted.

"I am a little bit more aware about where I will park my car," he says with a sigh. "The droppings were a big problem."

"The Birds" film showing with