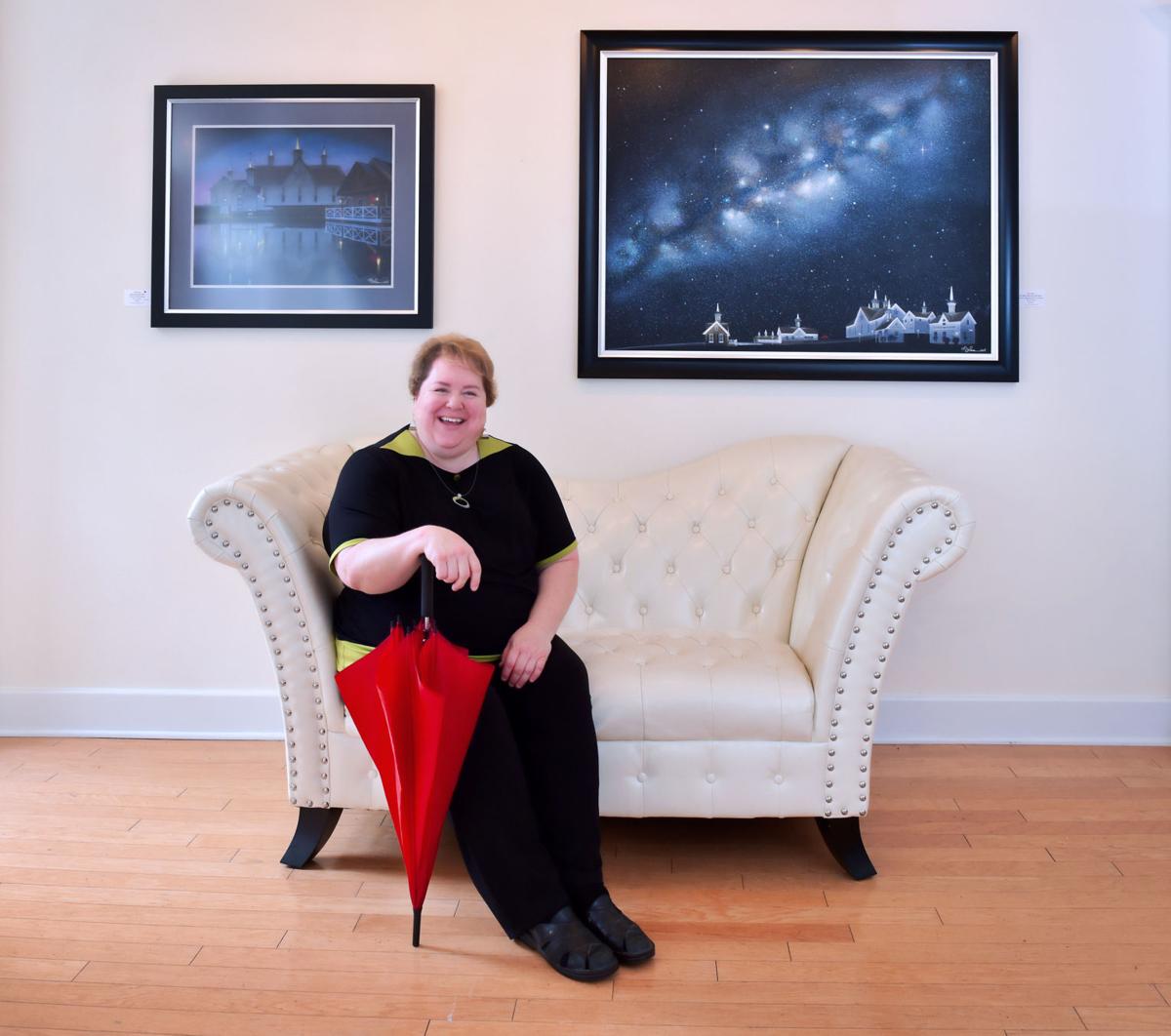 Liz Hess with some of her new Star Barn artwork. Monday, October 8, 2018 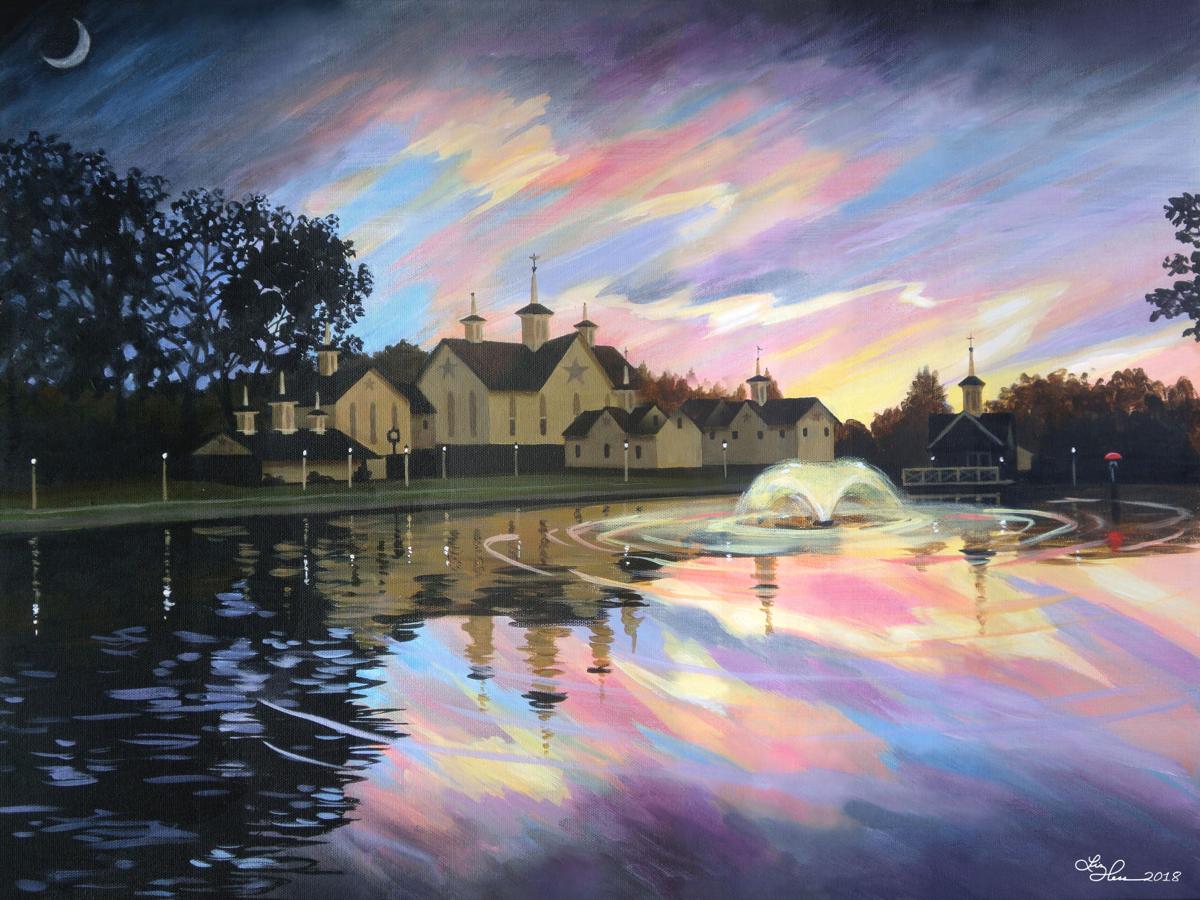 'Moonrise Sunset at the Star Barn' 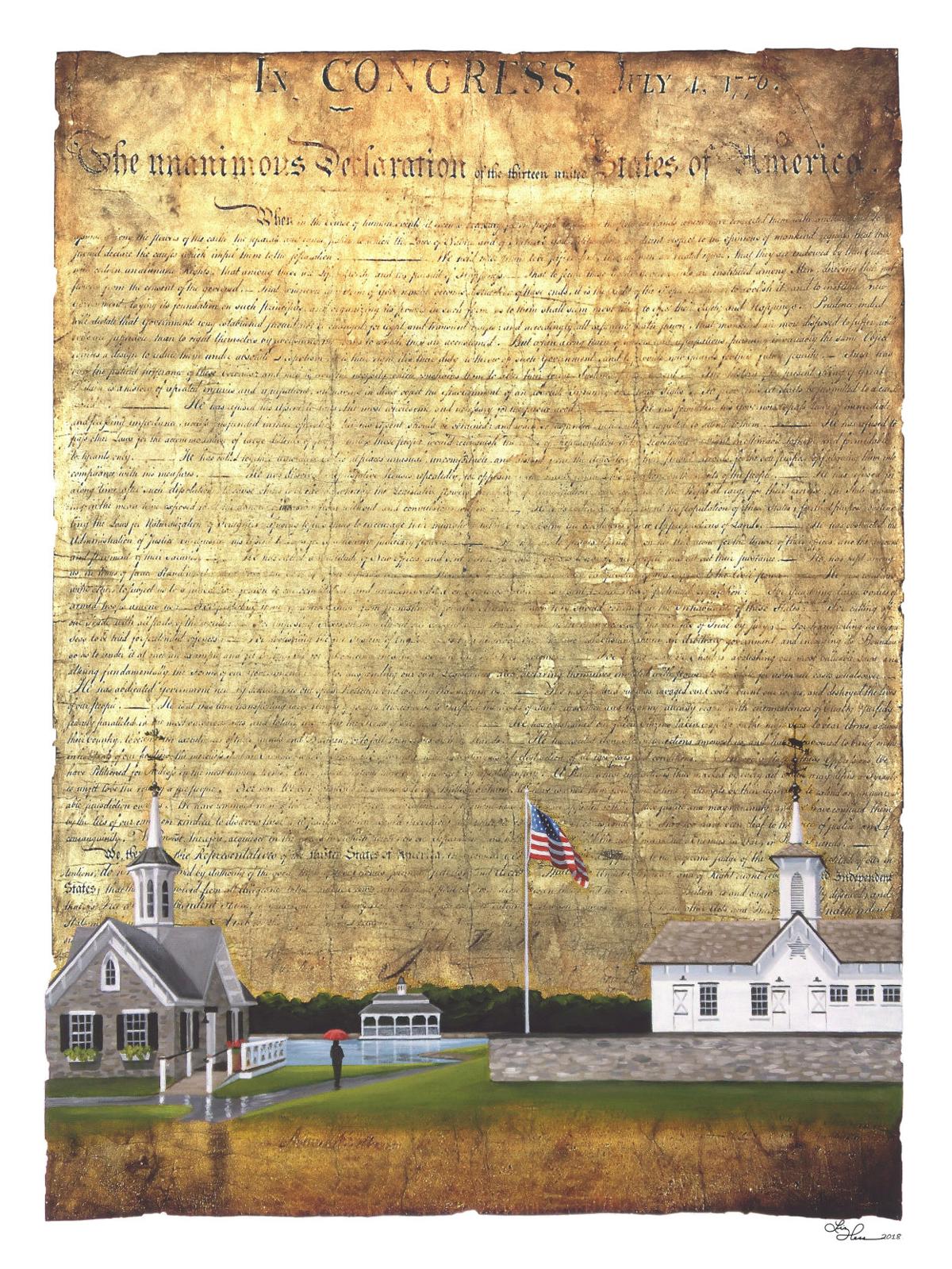 'Old Glory at the Star Barn' 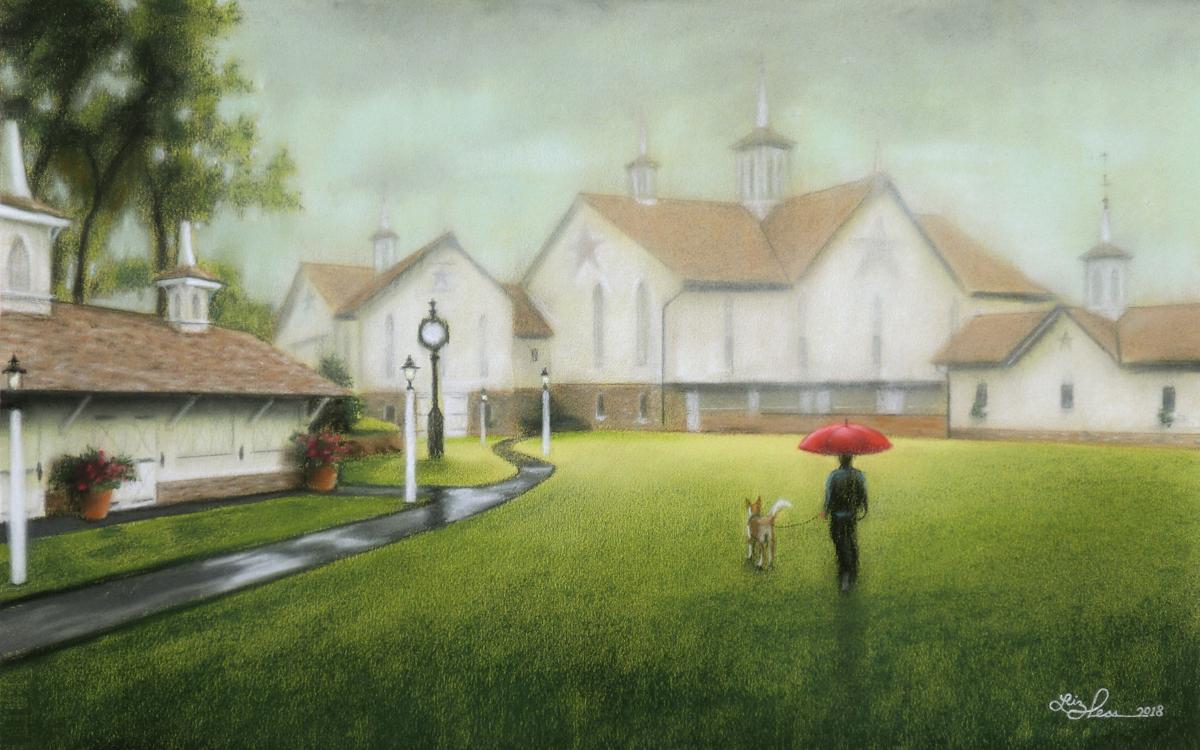 Unlike many Lancaster artists, Liz Hess never painted the Star Barn when it sat along Route 283 in its dilapidated glory for so many years.

“I thought there were enough images out there. I didn’t need to add to them,” Hess says.

Then David and Tierney Abel, who moved the Star Barn to the grounds of their home in West Donegal Township and restored it, commissioned her to paint the barn with all its cupolas, steeples and spires

That was in March.

Abel gave her a tour of his property.

“When you come around the corner on this windy road, you just see the spires,” Hess says. “Then more emerges, and then you see the entire Star Barn.”

But there is more than just the barn and its outbuildings.

“There are 275 acres, with gardens, vineyards, orchards, and there is a beautiful stone cottage on the lake.”

Hess was in love.

“I said I would create whatever they wanted, but I needed to do a show. There are so many angles and vignettes,” she says. “I wanted to showcase it because it’s never been seen like this before.”

Hess started coming to the Abels’ property in the morning, at dusk, midday and on sunny and rainy days. The Star Barn always held new ideas for her.

She works in acrylic, watercolor and pastel. The paintings range in size, some small, others quite dramatically large. And yes, her famous red umbrella shows up in many of the pieces.

Hess did wonder if people would keep their hearts attached to the old Star Barn, which was built in 1877 by a Methodist minister. There was something intriguing and beautiful about the dilapidated barn. Would people be interested in this new version?

Hess got her answer when the show opened on First Friday at her gallery on Prince Street.

“I sold two-thirds of the show,” Hess says. “It was a great weekend.” Those sold paintings will remain on the walls until the end of October along with the rest of the show.

Hess was very careful to be accurate with the details of the barn and its surrounding buildings, but her imagination takes flight as well.

“Moonrise, Sunset at the Star Barn” is a lovely, colorful acrylic offering some of the colors we see in the sky at both times of day.

“Old Glory at the Star Barn” features a backdrop of the Declaration of Independence, with a portrait of the Star Barn at the bottom of the painting.

With the lake in front of the Star Barn, Hess is able to offer various kinds of reflections in the work.

Muted browns give the watercolor “Star Barn Sepia” a special glow, and the man with the red umbrella adds a bop of color.

A couple hugs each other at their wedding, with a red umbrella keeping them dry in “Star Barn Nuptials.”

Some of the work Hess created has a celestial feel to it, especially “Milky Way Over the Star Barn,” a large acrylic.

“I started by painting the entire canvas black,” Hess says. “Then I began putting in white slashes. It looked like a caterpillar going across the canvas. Then I took an old toothbrush and spent hours flicking paint — lavender, blues and browns — onto the canvas until (it became) what I thought the Milky Way looked like from a Hubble spacecraft image.”

Hess is not done with the Star Barn.

“I want to do the Star Barn at Christmas. I love snow and winter, so I want to work on new scenes,” she says.

Part of Gallery Row on Prince Street for 16 years, Hess, who is self-taught, feels blessed.

“I love painting what I paint,” she says. “I am so grateful and thankful (that people like my work.) I always want the gallery to feel welcoming.”

And in case you’re wondering, the origin story of the red umbrella is pretty simple.

Hess was in Venice in winter, preparing for a show on Italy, and she painted a wonderfully melancholy scene.

“I loved the mood, but it needed a pop of color. Since is was snowing, I thought about an umbrella, and then I wondered what color it should be. Yellow? Blue? Red?”

She knew red was it. She added the umbrella into a few paintings, and they ended up selling first when she put on the show.

She did the same thing when she went to Paris the following year and painted four or five umbrellas. Again, the red umbrella paintings sold first.

“It really is a win-win,” she says with a smile. “I love painting what I paint.”

What: “The Star Barn” exhibit.