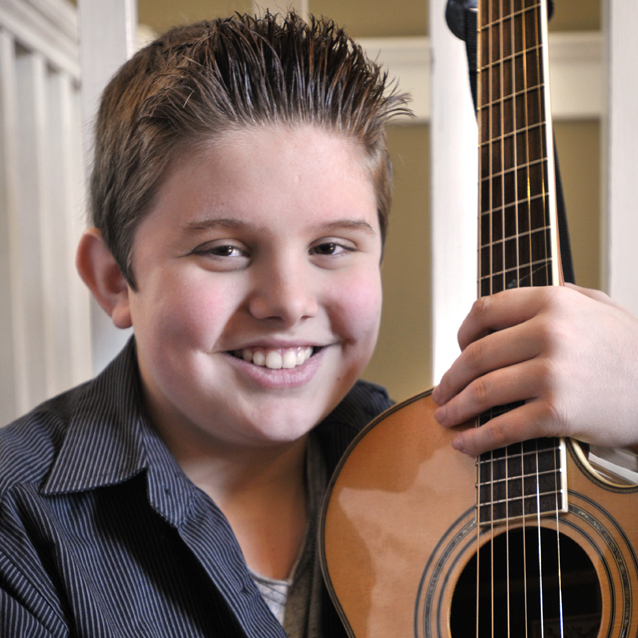 Sebastian Janoski poses with his guitar in his Lititz home. (Dan Marschka / Staff) 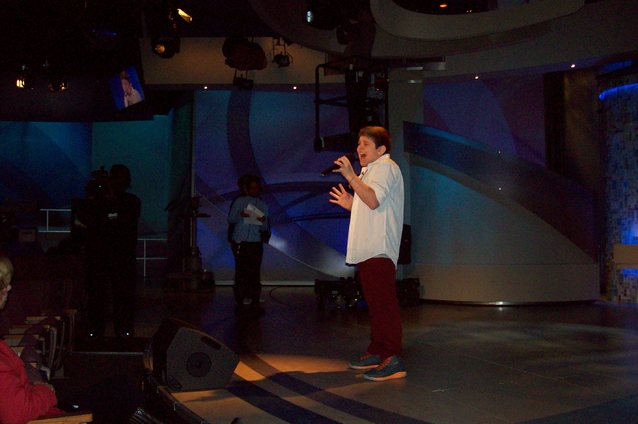 Sebastian Janoski performs during a special segment of Katie called "One to Watch," which features singers who have made it big on YouTube. (Photo provided by the Janoski family) 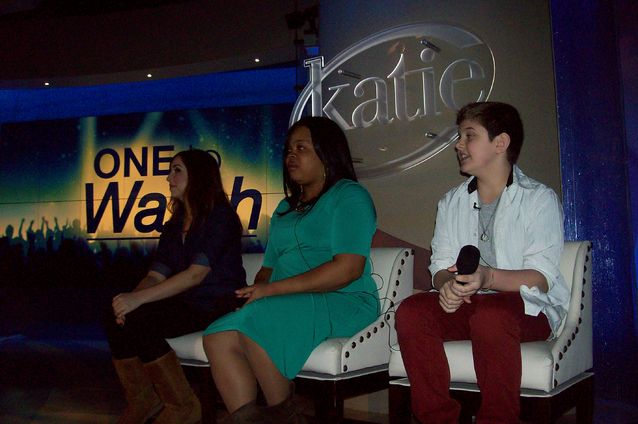 Sebastian Janoski waits with two other performers during a special segment of Katie called "One to Watch," which features singers who have made it big on YouTube. (Photo provided by the Janoski family)

Sebastian Janoski poses with his guitar in his Lititz home. (Dan Marschka / Staff)

Sebastian Janoski performs during a special segment of Katie called "One to Watch," which features singers who have made it big on YouTube. (Photo provided by the Janoski family)

Sebastian Janoski waits with two other performers during a special segment of Katie called "One to Watch," which features singers who have made it big on YouTube. (Photo provided by the Janoski family)

Sebastian Janoski is 13 years old, but - surprisingly, for someone his age - he ranks the Beatles, Michael Jackson and Aretha Franklin above the likes of Justin Bieber, Miley Cyrus and Taylor Swift.

"I really don't like a lot of the newer singers," the Lititz boy says. "It's not really my music."

His musical tastes have served to fuel his musical aspirations. Sebastian, who already has spent six years making his way as a performer, will be featured Tuesday afternoon on Katie Couric's talk show, "Katie."

The 3 p.m. broadcast on ABC is a special segment called "One to Watch," which features singers who have made it big on YouTube.

Sebastian and the other contestants - two women, much older from his perspective, at 27 and 30 - performed for judges Clive Davis and Jordan Sparks.

Sebastian credits a creative family - particularly his aunt, Ann Straley, who sings in several local bands - with lighting his artistic fires at an early age.

"I started singing when I was really young, like when I was 3," he says. "I decided it was something I wanted to do when I was 5 or 6. I've been performing since I was 7."

His appearance on Couric's show came about after he recorded a video of himself singing "Ho Hey" by the Lumineers.

"It was a song I'd just learned that day," he says. "My dad sent it to the Katie Couric show. Apparently, they liked it."

A show representative called Sebastian's parents on Feb. 10 and asked them to bring their son to Couric's New York studio to tape an appearance bright and early on Feb. 13.

Sebastian spent several hours there - rehearsing, getting his makeup and hair done, hanging out backstage in the green room and "seeing how everything worked."

It was fun, he says, chatting with Couric during his interview.

"She asked me a few questions," Sebastian says. "She seemed really nice. She was cool."

For his performance, he sent in a list of four songs, including classics such as "Imagine" and "House of the Rising Sun." Network executives chose "One More Night" by Maroon 5 - mostly, Sebastian says, because it was the easiest song for which to acquire licensing rights.

"I haven't been doing it for long, maybe a few weeks," he says. "But it has a nice beat to it, and it's really nice to sing."

He usually accompanies himself on guitar, but in this case the studio provided an instrumental track for Sebastian to sing with.

He was a little nervous, he admits, but says he "was pretty comfortable."

Perhaps that's because he's already honed his skills in front of crowds, singing the National Anthem for the Lancaster Barnstormers, performing in musicals at Ephrata Performing Arts Center and American Music Theatre, singing at open-mic nights in various local venues and sometimes putting a tip jar on the sidewalk and busking on street corners for Second Friday events in Lititz.

Last year he auditioned for the seventh season of NBC's "America's Got Talent." He made it to the top 200 out of 100,000 hopefuls who tried out for the show and was able to sing in St. Louis for celebrity judges Howie Mandell, Sharon Osbourne and Howard Howard Stern. But he didn't make it onto the show.

An eighth-grader at Our Mother of Perpetual Help, he's scheduled to perform in April at the LAUNCH Music Conference in Lancaster and in May at the Fulton Opera House.

After his performance for Katie Couric, judge Clive Davis told Sebastian he "should always have a plan B," just in case a musical career doesn't pan out.

"I don't really agree with that," Sebastian says with a smile. "It's all about performing. That's all I do. ... I really feel that's what I'm meant to do."

"My dream school is Juilliard," he says, "if I'm not famous by then."