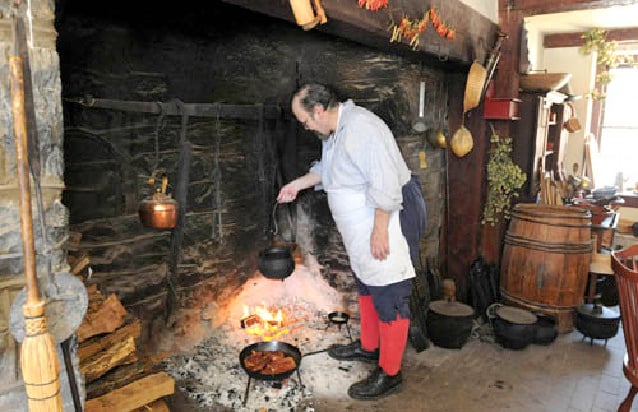 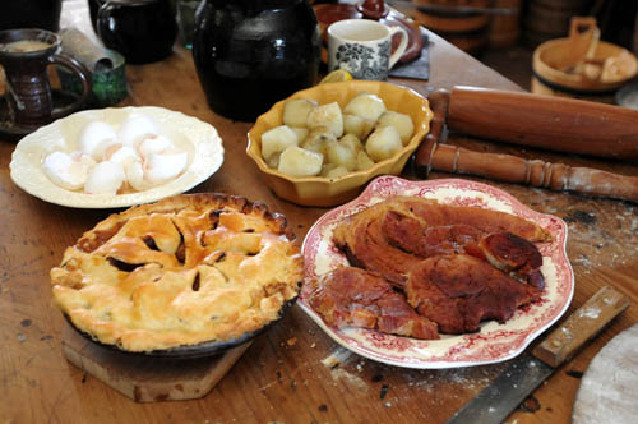 Juicy ham steaks sent a savory aroma into the air from the long-legged, cast-iron frying pan over a bed of glowing embers.

Nearby, potatoes boiled in a black kettle, and browning butter sizzled in a small pan.

The tables in the 18th-century tavern at Landis Valley Farm Museum were already filled with finished pies, cookies and loaves of bread, as well as noodle dough drying "leather hard" before being cut into strips.

Thomas Martin has had a busy day.

Martin, Landis Valley's resident chef, will teach a class on open-hearth cooking this weekend during the museum's three-day Winter Institute.

Many of the one-, two- and three-day classes, which start today, are already filled, museum educator Timothy Essig said Tuesday.

But the Winter Institute is a 14-year-old annual tradition, he noted. The Summer Institute, which has similar offerings, has been running for more than 50 years.

So, if you can't get a slot this weekend, there's always next time.

The open-hearth class is a popular offering that usually fills up quickly, Essig said.

"This year, we are doing two funerals and a wedding," Martin said.

The historical focus, he explained, is on the 1750s wedding of Benjamin Landis, who established the first community at Landis Valley, plus the funerals of Jacob Landis in 1848 and Nellie Mae Landis in 1914.

Most weddings in the 18th and 19th centuries were informal affairs, Martin said. "It was usually a matter of going to the minister, and that was it."

The Amish, on the other hand, did weddings in a big way, often serving two meals to 300 or 400 people.

"It's a three-day affair," Martin said. "The first day is for preparing the food. The second day is the wedding. Then the third day is the cleanup."

"There weren't a lot of vegetables," Martin said. "It was mostly sweets."

The class will focus on the preparation of the foods as well as the actual cooking. For instance, Martin said, in Pennsylvania Dutch society, "if you can't roll your noodles and your pie dough in a complete circle, you're not eligible for marriage."

Most foods are cooked over embers, he noted, not an open flame. And temperatures are monitored by feel, not a thermometer.

"If you can stick your arm in the oven for about 10 seconds without burning it, it's at about 400 degrees," Martin said. "That's good for loaves of bread and fruit pies."

With experience, he said, a cook can gauge the temperature just by looking at the embers.

Participants also will peel fruits and veggies, roll dough and wash the dishes. "That's part of it, too," Martin said.

Martin, who's been working the stove at Landis Valley for 27 years, said his interest in cooking was sparked at his grandmother's knee. Although she used a conventional oven, he used to watch her bake pies weekly when he was a child.

"The first time I smelled homemade bread, I was hooked," he said.

He's largely self-taught, combining a smattering of classes with research "and a lot of trial and error."

"If you know how to cook on a regular stove, this really isn't that difficult," Martin said. "You just can't have a fear of fire."

The effort, he said, is worth the experience - especially when you taste the food.

"It's a whole world of difference," Martin said. "People who have eaten open-hearth food will attest to the fact that it does taste better. … Your food has more flavor. More color."

And there's more to it than that, Essig said.

"When you do something with your own hands, you often feel it's better than something you bought in the store," he said.

"When you make something from scratch, there's a purity in its taste, in its appearance," Essig added. "Call it nostalgia. Call it 'simpler times.' But our classes help to carry on our community traditions."

Most of the people in Martin's class this weekend are repeat visitors, Essig said.

One, he said, has been coming for nearly half a century - missing only a few classes here and there for childbirth.

"People get intimately involved in what they're doing when they take these classes," he said.

The next Summer Institute runs June 14 to 17. To register, call the museum at 569-0401 or visit online at landisvalleymuseum.org.

The summer series includes more outdoor activities, including milking and dairying, as well as seminars and field trips on architecture, gardening and 18th-century medicines.

"People talk about a Pennsylvania Dutch culture. Well, this is an American culture," Essig said. "And preserving that is our mission."