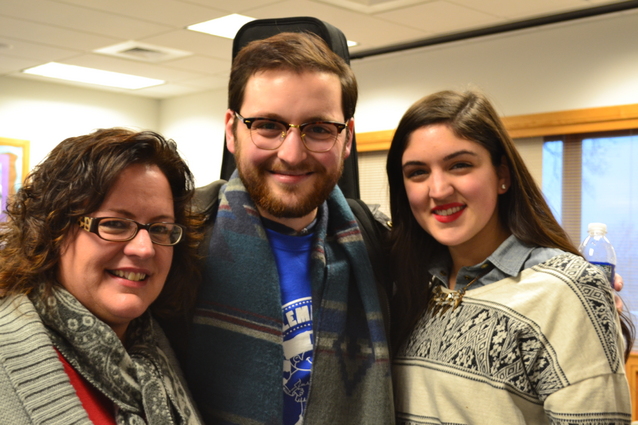 James Wolpert shares a moment with his mom, Margie, and his sister, Rachael. (Cindy Hummel/Correspondent) 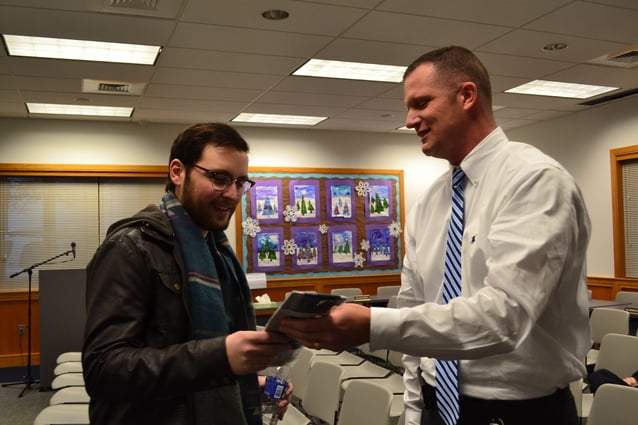 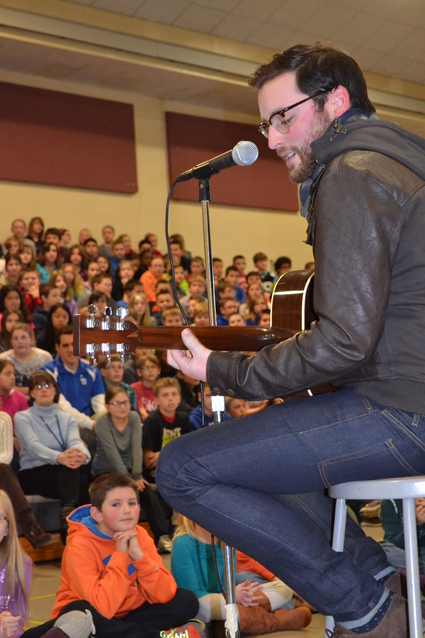 James Wolpert shares a moment with his mom, Margie, and his sister, Rachael. (Cindy Hummel/Correspondent)

James Wolpert may be a worldwide star since his appearances on "The Voice," but at home in Strasburg, he remains one of the family - at least until the Wolperts leave their house.

During a visit home for the holidays, Wolpert paused for an interview on Friday following a tour of Lampeter-Strasburg schools.

He was accompanied by his sister, Rachael, and mother, Margie. His Dad, Bud, was at work.

Without warm clothes for shoveling snow these past weeks, the singer got out of snow-removal duty, his mother, Margie, said. Wolpert said sleeping in on snowy days helped as well. Still, Margie Wolpert said, America's idol must empty the dishwasher when asked.

Wolpert said he returned home from Los Angeles in time to go Christmas shopping and drew attention from other customers. Going to the movies and out to dinner with his family, fans surrounded him.

Wolpert's sister, Rachael, a Texas college freshman, recalled that an entire engagement party at the Federal Taproom came to meet him.

The singer said he never wears sunglasses or disguises. In fact, he goes out in public without his trademark glasses when he wants to blend in.

"It is the Clark Kent effect," he said.

Rachael said she has stage fright and did not mind her brother taking the spotlight. She said the biggest change in her life since James became famous is that far more people are following her on Twitter and Instagram.

Wolpert's life has certainly changed since graduating from Lampeter-Strasburg in 2009.

One visible change upon his return home was a sign at The Strasburg Country Store and Creamery advertising "Wolpert Win and Creme," containing chocolate ice cream, dark chocolate chips, mini-marshmallows and Snickers bars.

Wolpert liked the treat, although he said he might have added M&Ms.

He also returned to Strasburg as the second reality television star on his block. Chef Barbie Marshall, who appeared on Hell's Kitchen, lives just a few houses away.

One of the biggest challenges, Wolpert said, was the "insane schedule" of being on "The Voice." Contestants worked seven days a week. After elimination rounds, remaining contestants had to wake up at 7 a.m. to start rehearsing again.

Wolpert learned songs he had never heard before and new arrangements of familiar works. Contestants had two 45-minute sessions with their coaches each week.

The frantic pace, with no time for things like the severe sore throat that Wolpert suffered through, made for nervous moments.

"Everything that is happening for you is so big," Wolpert said. "You just have to let it wash over you and try to forget the implications."

Each week, he and fellow contestants had to combat their nerves by showtime.

"You realize that people have invested millions of dollars and lots of time, and it's up to you to make sure it is a success," Wolpert said.

The journey started when Margie Wolpert suggested her son try out for "The Voice." He also got encouragement from his cousin, actor and Conestoga Valley grad Jonathan Groff, who is the voice of Kristoff, the male lead character in the Golden Globe-nominated Disney animated movie, "Frozen" and whose HBO series, "Looking," debuts Sunday.

Groff also visited Wolpert at The Apple Store in Pittsburgh, where James worked fixing computers. Wolpert recalled his cousin again trying to convince him to try out for "The Voice."

So Wolpert joined thousands of other hopefuls waiting in New York City in January 2013 for a chance to sing, if even for seconds. He flew back and forth between Los Angeles and Pittsburgh for callbacks and interviews.

"The Voice" gave him a date for when a decision would be made. When that day passed, Wolpert went on with life at The Apple Store, where he had begun working after dropping out of Carnegie Mellon University after two years.

At the Apple Store, he finally got the call informing him that he had made it on the show. He recalls dropping everything - including a customer's computer - upon hearing the news.

The Marriott at Burbank became his new home. He and Cole Vosbury, who also finished in the show's top five, became roommates and close friends soon after. Wolpert said he also keeps in touch with contestants Tessanne Chin, Jacquie Lee, Matthew Schuler and Caroline Pennell.

Wolpert no longer has contact with Adam Levine, who was his coach on "The Voice" and was also named the "Sexiest Man Alive" during the show's season. To the disappointment of an L-S parent who heard otherwise, Levine did not accompany the local hero on a visit to L-S schools on Friday.

Originally thinking he would pick Blake Shelton as his coach, Wolpert trusted a gut feeling to pick Levine after listening to the four coaches making their case. Levine is as friendly and down to earth as he appears on camera, Wolpert said.

He was scheduled to leave town Monday, but will be back for concerts Feb. 15 and 16 at The American Music Theatre.

The Feb. 15 concert sold out, and the second concert has been added. Vosbury will appear with Wolpert at both concerts.

Wolpert said he is "very hesitant" to sign with any major label just yet. He has been talking with potential agents and managers.

So what music does Wolpert have on his own playlist?

"I am very curmudgeonly about music," Wolpert said.

When he finds a song he likes, he listens to it repeatedly. Favorites include Queen, Steely Dan and Jack White.

Before heading back to LA, Wolpert spent the weekend watching a Friday night performance of Willy Wonka and the Chocolate Factory at Martin Meylin Middle School.

He also spent time with friends who are also home for the holidays.

After living the life of a television star, Wolpert never forgot Strasburg.