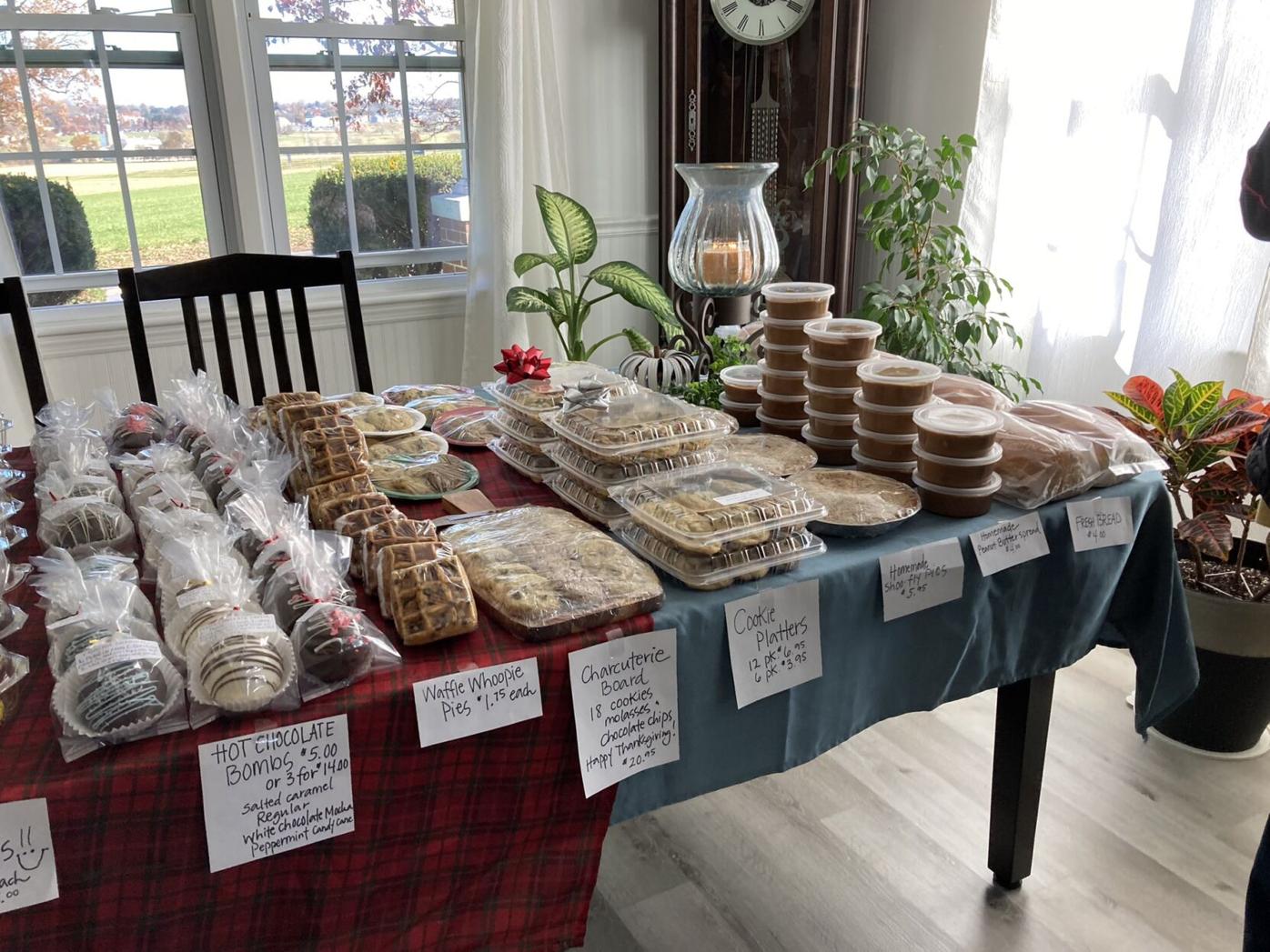 Some of the cookies and treats for sale at Linda Stoltzfoos' house during the Amish Farm & House Amish Christmas cookie tour, on Nov. 19, 2021. 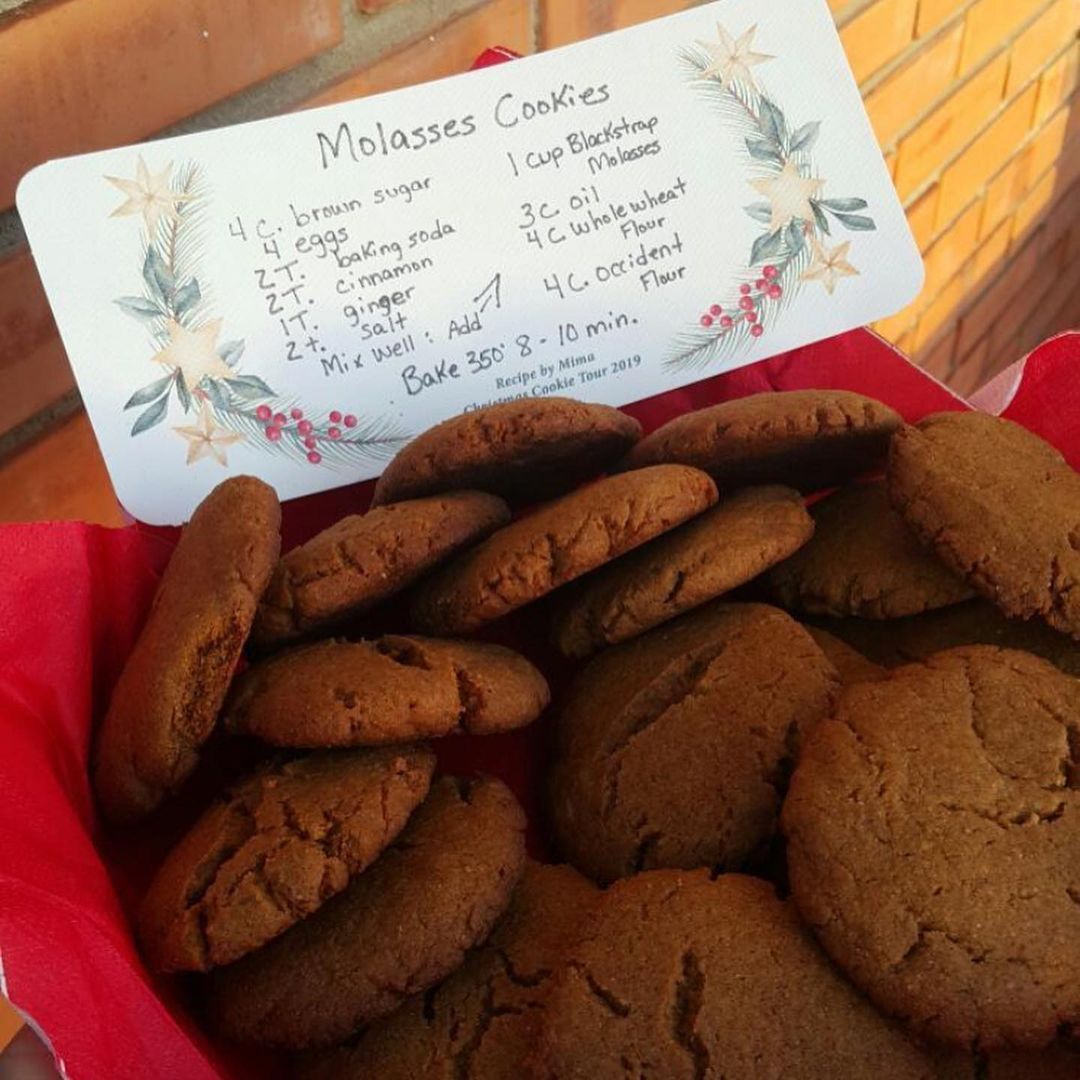 Molasses crinkles alongside a handwritten recipe.

On a recent crisp day in Lancaster County, tour bus driver Debi Fultz spent more than two hours driving a filled bus from house to house, all in the name of Amish Christmas cookies.

As Christmas draws closer, Amish bakers stock up on sweets to sell or give to the community, and there's now an entire tour dedicated to that, hosted by the Amish Farm & House.

The tour took visitors on a trip to three houses across the county, driving through Ronks, Intercourse and Bird-in-Hand.

On the back of the recipe cards are some Amish Christmas fun facts! pic.twitter.com/gLHWIU0yDZ

Fultz peppered in fun facts about the Amish and their culture in between houses. For starters: anyone who is not Amish is considered English, regardless of their heritage, background or where they've lived.

The first house our tour bus stopped at was that of Linda, a young Amish woman who baked chocolate chip cookies and molasses crinkles to give to the tourgoers. Fifteen people gathered in her home comfortably, as the open floor plan was accommodating for many guests.

Tables featured delicious-looking baked goods that were all for sale, including whoopie pies made with Belgian waffles, tons of cookies and baked goods, as well as dried fruits that were supposed to last for 25 years, Linda said with a laugh.

The first stop on my cookie tour was to the house of Linda Stoltzfoos, who loves to bake for the Christmas season. She lives with her husband and her sister, as well as her sister’s kids in Ronks. She gave us chocolate chip cookies and molasses crinkles, as well as recipes. pic.twitter.com/xWyPJgfjy7

(A note for readers interested in going on this tour: Bring cash if you want to buy things. Some Amish businesses accept credit cards, but it's uncommon to accept anything other than cash or checks in a home setting, Fultz says.)

Tours will vary based on the crowds who go. The people that LNP|LancasterOnline was on tour with were primarily of retirement age, but the group did include a young family and one child. The attendees were a good mix of local and out-of-town folks.

The lone child on this particular tour day, knowing what Fultz had mentioned in the bus ride on the way to Linda's family home, proclaimed, "I'm not Amish, I'm Irish!" The child then paused for a moment. "English!"

Linda talked about her family's Christmas traditions, to which she concluded that they're similar to how most English Christians enjoy Christmas. All hosts on tour emphasized the role of family — Linda lives with her husband, her sister and her sister's children.

Afterwards, the tour went to Mary Ann and Elam's house in Ronks.

Next, we visited Mary Ann and Elam Esh’s house. Mary Ann offered snickerdoodle cookies and ornament ball cookies. They had several things for sale while there, lots of decorations, some canned fruits and jams. pic.twitter.com/K4bqqBuprA

Mary Ann offered lemonade, no-bake ornament treats and snickerdoodle cookies, as well as the recipes for the sweet treats.

Her house was also open and accommodating for a crowd, and featured some canned goods, like fruits and jams, as well as handmade purses, painted signs, baby burp blankets and clothes for children.

She, her husband, and her seven children are going to New York state this year to visit family for Christmas. Their traditions are to all gather at a location, which changes each year, and celebrate all together.

The last house the tour visited was that of Rachel and David in Intercourse.

And lastly was Rachel and David Esh’s house, where they gave us pecan cups and Santa’s Confections (a cookie ball with tons of good stuff in it). pic.twitter.com/lbOnSIvyA5

After the couple gave out the cookies and recipes, David talked about his buggy, which he's had for over 30 years. The aforementioned child on the tour and his mom got their picture taken in the buggy as David explained the ins and outs of owning one.

Most people took the cookies they got and put them into a bag to be enjoyed later, and all houses gave out samples of cookies to try while there.

Tour-goers will leave with several cookies to try immediately or at home, as well as a ton of facts about Amish culture. Even those who are local to Lancaster County would likely leave having learned something new.

The tour continues on Fridays and Saturdays through Dec. 18.

Try 4 types of Amish Christmas cookies on this holiday tour, come home with the recipes to make them

Broadway hit musical 'Waitress' comes to Hershey Theatre; here are 4 things to know before you go

From retail to styling for the Met Gala: Lancaster native Manny Jay soars in the world of fashion

7 events in Lancaster County this weekend, from Christmas Spirit Light Show to a Belsnickel appearance

Even on the weekend after Thanksgiving, there is still plenty to do in Lancaster County - and some of it is free.

Disney Princess concert, featuring songs from 'Aladdin,' 'Frozen' and more, will make stop in Lancaster in 2022

For one night in Lancaster County, young and old Disney fans alike can sing in person alongside their favorite Disney princesses.

If you've ever seen dozens of festively dressed bar-hoppers in downtown Lancaster, you've likely seen part of the Santa Stumble.

Taylor Swift dance party announced at Phantom Power; here's how to get tickets

A two-part TikTok video comparing Pennsylvania towns, roads and boroughs to made-up places in a fantasy drama has gone viral.

I say this as a secular person: Read the Bible. It will make you a better writer.

Where to see Santa in & around Lancaster County for Christmas 2021

Santa Claus is comin' to town -- many of them, throughout Lancaster County and beyond.

5 events in Lancaster County this weekend, from 'Les Mis' at EPAC to MewithoutYou at Phantom Power

The end of November and start of December signifies the start of the holiday season for many who celebrate: it's the time of the year for good…

December First Friday: 12 things to do in Lancaster County, from an artisan market to weaving classes

December's First Friday in Lancaster has a little bit of everything.

Christmas lights are back in action in and near Lancaster County as people prepare for the upcoming holiday season.

37 holiday events in Lancaster County to go to this week, from pet pics with Santa to holiday markets

The holiday season is here, and Lancaster County has several ways for you to celebrate.

Martha De Laurentiis, a producer known for her work with films "Hannibal," and "Red Dragon," as well as the TV show spinoff "Hannibal," died a…