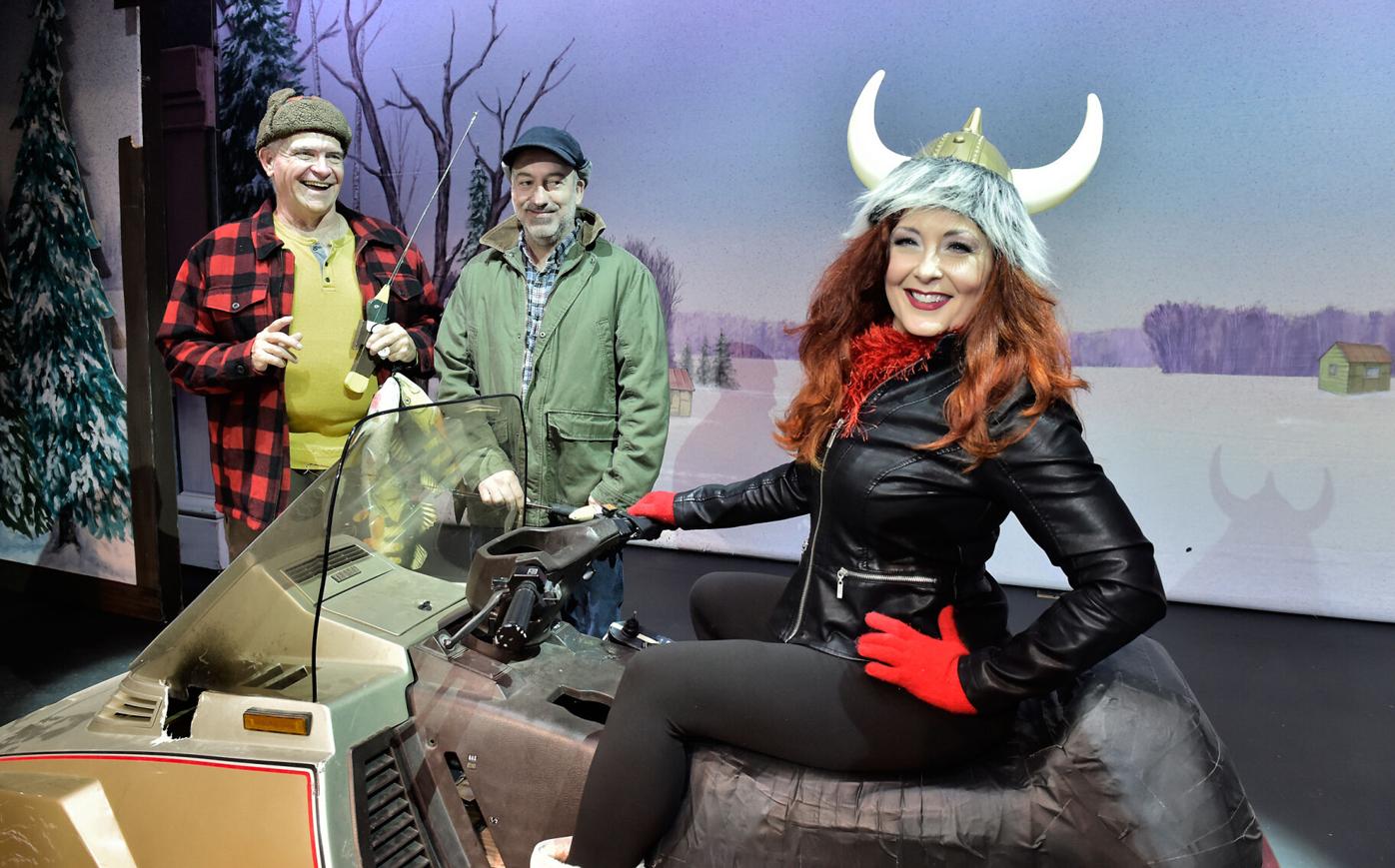 From left, Rob Summers as Max, Luther Chakurian as John and Miranda Jane as Ariel rehearse a scene from the musical "Grumpy Old Men," returning to the Dutch Apple Dinner Theatre Aug. 5 to Sept. 4. 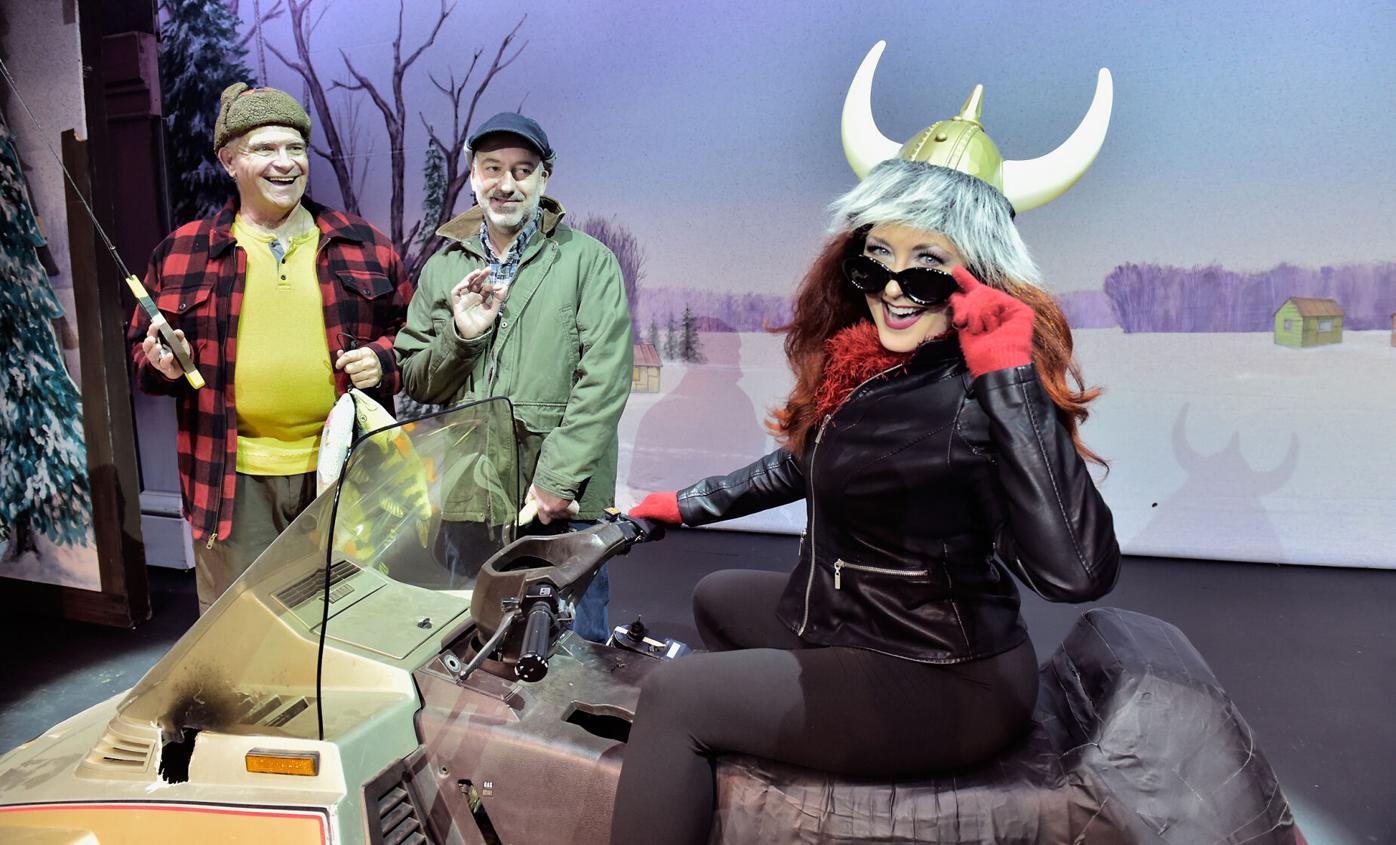 From left, Rob Summers as Max, Luther Chakurian as John and Miranda Jane as Ariel rehearse a scene from the musical "Grumpy Old Men," returning to the Dutch Apple Dinner Theatre Aug. 5 to Sept. 4 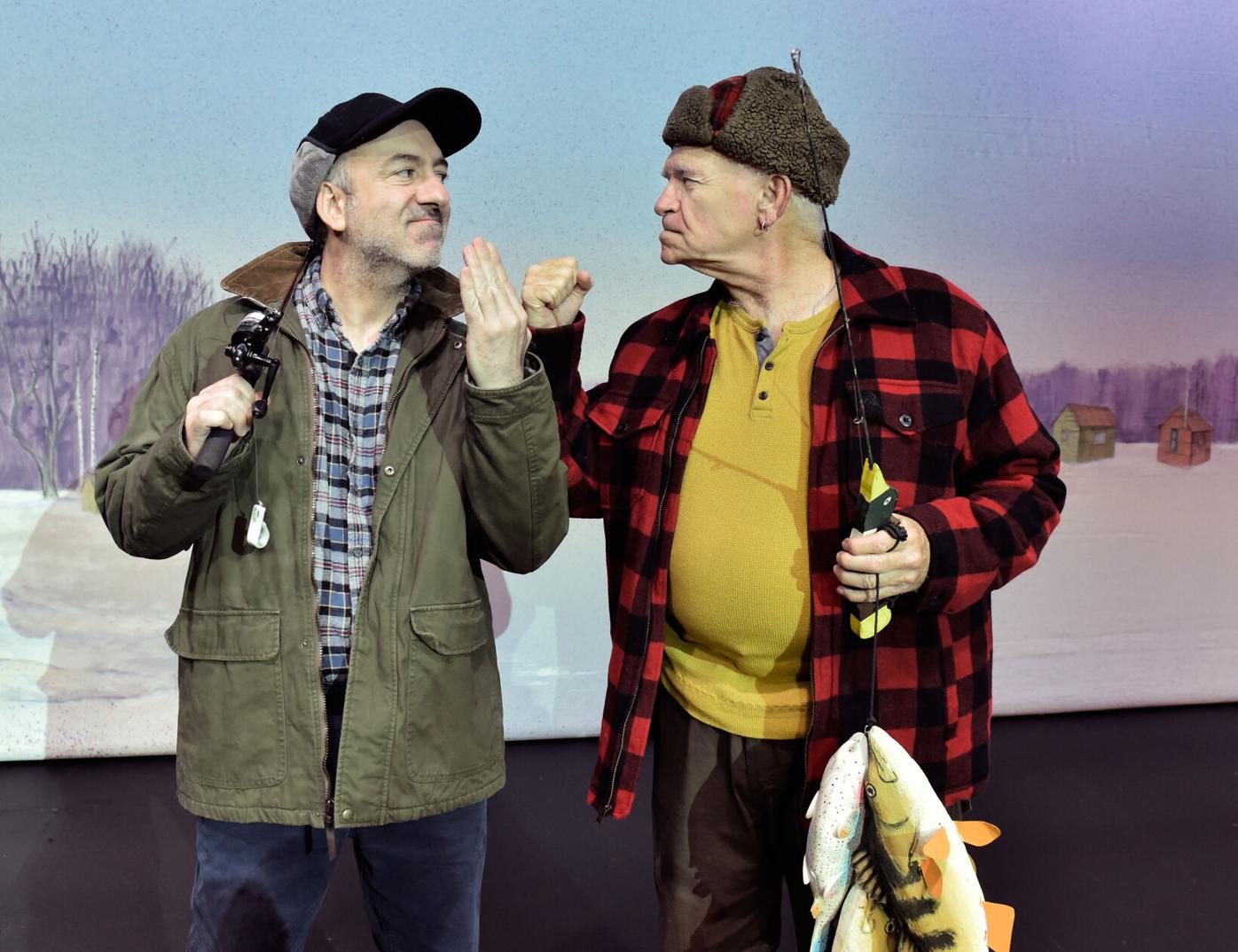 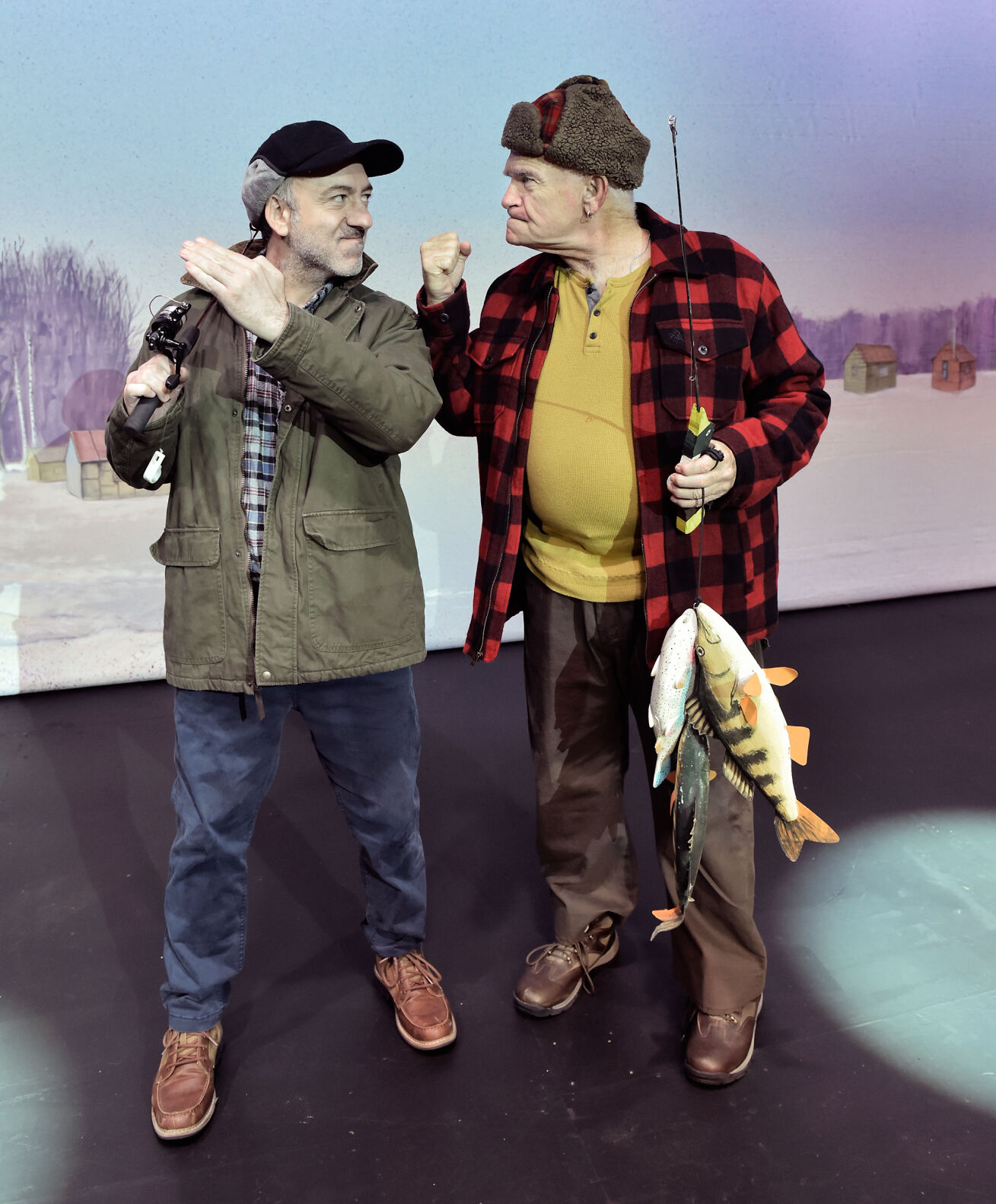 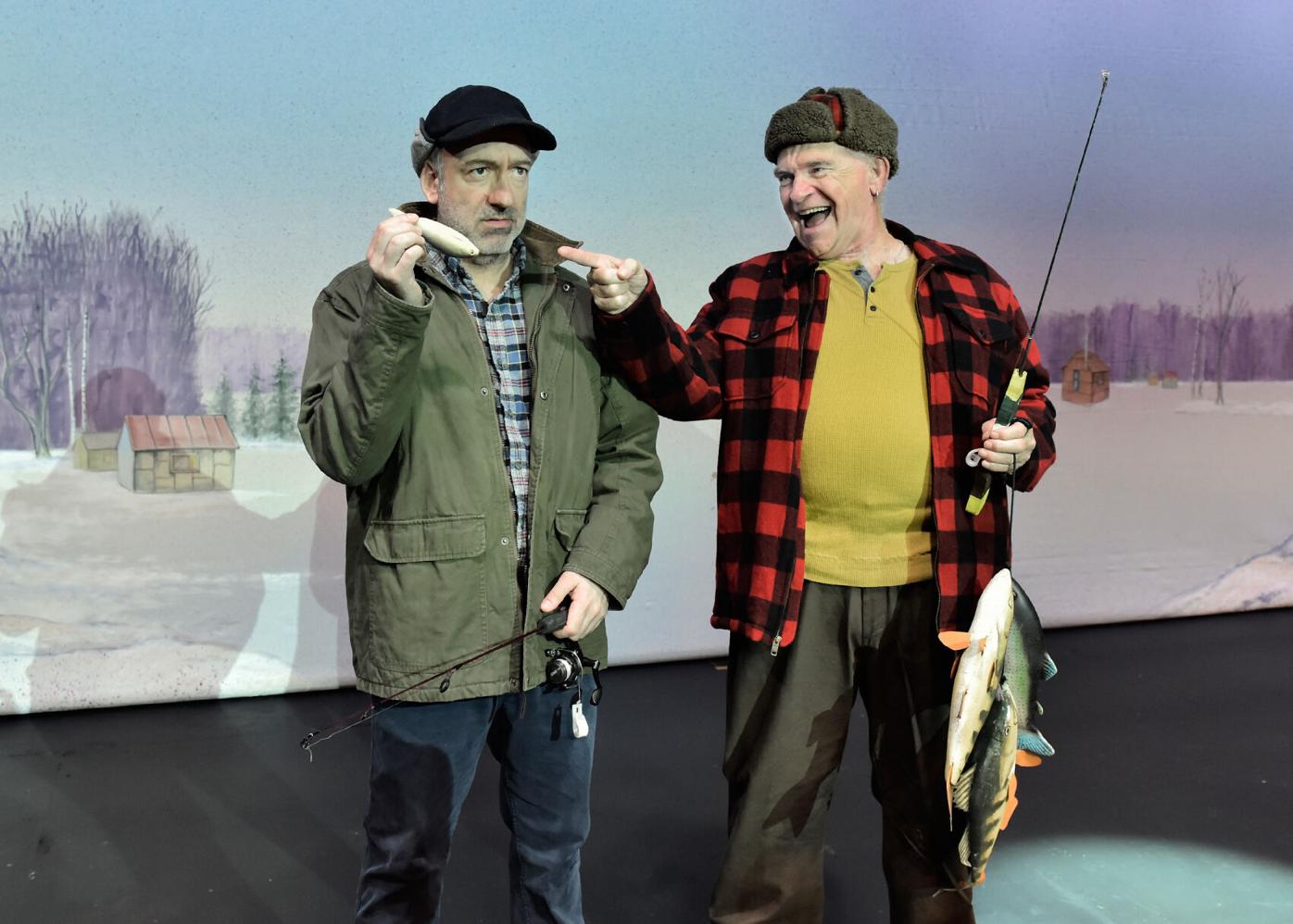 From left, Rob Summers as Max, Luther Chakurian as John and Miranda Jane as Ariel rehearse a scene from the musical "Grumpy Old Men," returning to the Dutch Apple Dinner Theatre Aug. 5 to Sept. 4.

In March 2020, three actors were fresh off a successful Florida run of a show based on a hit 1990s comedy film.

Then the COVID-19 pandemic hit, closing down theaters across the country.

A year and a half later, the trio is back in town, reprising their roles as a pair of long-feuding widowers and a woman who warms their hearts and those of the other residents of Wabasha, Minnesota.

“Grumpy Old Men,” a 2018 musical based on the 1993 comedy film starring Jack Lemmon, Walter Matthau and Ann-Margret, reopened at the Dutch Apple on Thursday.

“I remember, it was St. Patrick’s Day (2020) when I was driving away from here,” to return home to Little Rock, Arkansas, says Jane, who plays Ariel Truax in the show.

“I walked into that rehearsal room that first day with a different mindset,” she adds. “It definitely renewed for me that, holy smokes, this thing we get to do is so special. This is such a gift.”

“We actually get closure,” says Summers, who plays Max Goldman. “Because we started this run. And it’s like life interrupted. And now we get to come back and get closure and feel we’ve accomplished (this).”

Since March 2020, Summers has performed in two shows at the Broadway Palm. He also contracted a mild case of COVID-19 that temporarily took away his sense of taste and smell.

“It kind of punctuates what was taken away from us because of the pandemic,” says Chakurian, who plays John Gustafson in the musical and hasn’t performed on a theater stage since March 2020.

“The show really does teach us to live in the moment and to appreciate what’s in front of you and to not take for granted the people and the things in your life,” Chakurian says.

While the stage version of “Grumpy Old Men” has a similar plot to that of the movie, “We are not the movie,” Jane says. “People will recognize the set-up and the story line immediately. ... People who love the movie will love the show.”

But “the material has been adapted for the medium in which it’s being presented,” she adds. “There are a lot of differences.”

The “grumpy old men” of the show’s title, Gustafson and Goldman grew up together and were best friends until 50 years ago, when one married the woman the other loved. They’ve been feuding ever since — regularly calling each other “putz” and “moron.”

Chakurian and Summers say that, despite their feud, the men both seem to be subconsciously missing each other’s friendship, and secretly hoping Gustafson’s son and Goldman’s daughter will become a couple.

Ariel, an artist who’s come to Wabasha to teach literature, “basically blows into town and injects this sleepy, snowy, cold Minnesota town with life and color and vivaciousness that this community’s not used to,” Jane says, “and kind of takes them by surprise.

“The entire town is really a family,” Jane says, caring for each other, but also squabbling like a family sometimes does.

“And so Ariel comes into town with a completely different perspective and viewpoint and seize-the-day sort of mentality that in their entrenched community they’ve lost sight of. ... She gets everybody looking at things a little bit differently.”

Her love for literature, art and music appeals to Gustafson, Chakurian says.

And Max “has a profound sense of loneliness, and when (Ariel) walks into town, he’s kind of going, ‘wow,’ and the feud and all the old feelings come up again,” Summers says.

While the show will appeal to an older audience that will identify with the senior life experiences it presents, Chakurian says younger audience members will connect with the show through the comedy.

“This show will make you laugh,” he says. “We have a good time.”

Jane notes there’s a wide range of ages and personalities among the other residents of Wabasha — from the high schoolers to a 94-year-old Grandpa, from athletes to the mailman, and from local gossips to the “town dingbat.”

“There’s not anyone in this show that you haven’t met in your own life,” Jane says.

“And I think the love the whole town has for each other” will appeal to audiences of all ages, Summers says, “because, to me, that’s the throughline of this entire show.”

• What: The musical “Grumpy Old Men.”

• When: Opens Thursday, Aug. 5; runs through Sept. 4. Tuesdays to Sundays at various times, evenings and matinees.

• Safety information: The Dutch Apple recommends all audience members wear masks while in the theater except when eating and drinking, and practice social distancing. For the theater’s COVID-19 safety information, visit: dutchapple.com/covid-19-safety-measures.

The Lancaster Science Factory is putting some of its programs on wheels.

On May 26, 1962, at least two Lancaster County music institutions were officially born.

In the back of the old Huber’s West End Market, there’s a makeshift market with bowls of kal…

Humane Pennsylvania shelters rescued 17 dogs from Puerto Rico; here's how you can adopt one

Humane Pennsylvania shelters recently rescued 17 dogs from Puerto Rico, and some of the anim…

How to watch, stream Sight & Sound Theaters' 'Ruth' this Friday

It's BLT season: Here's where to get fresh tomatoes, bread and more in Lancaster County

Attention tomato lovers, please report to the kitchen sink for a very important message: The…

Lancaster County has a new brewery guild; here's how to get the first collab beer

The Lancaster County Brewers Guild West Coast IPA will soon be on tap.

I have never been married, but I’ve been blessed with many kids through my eight brothers and two sisters.