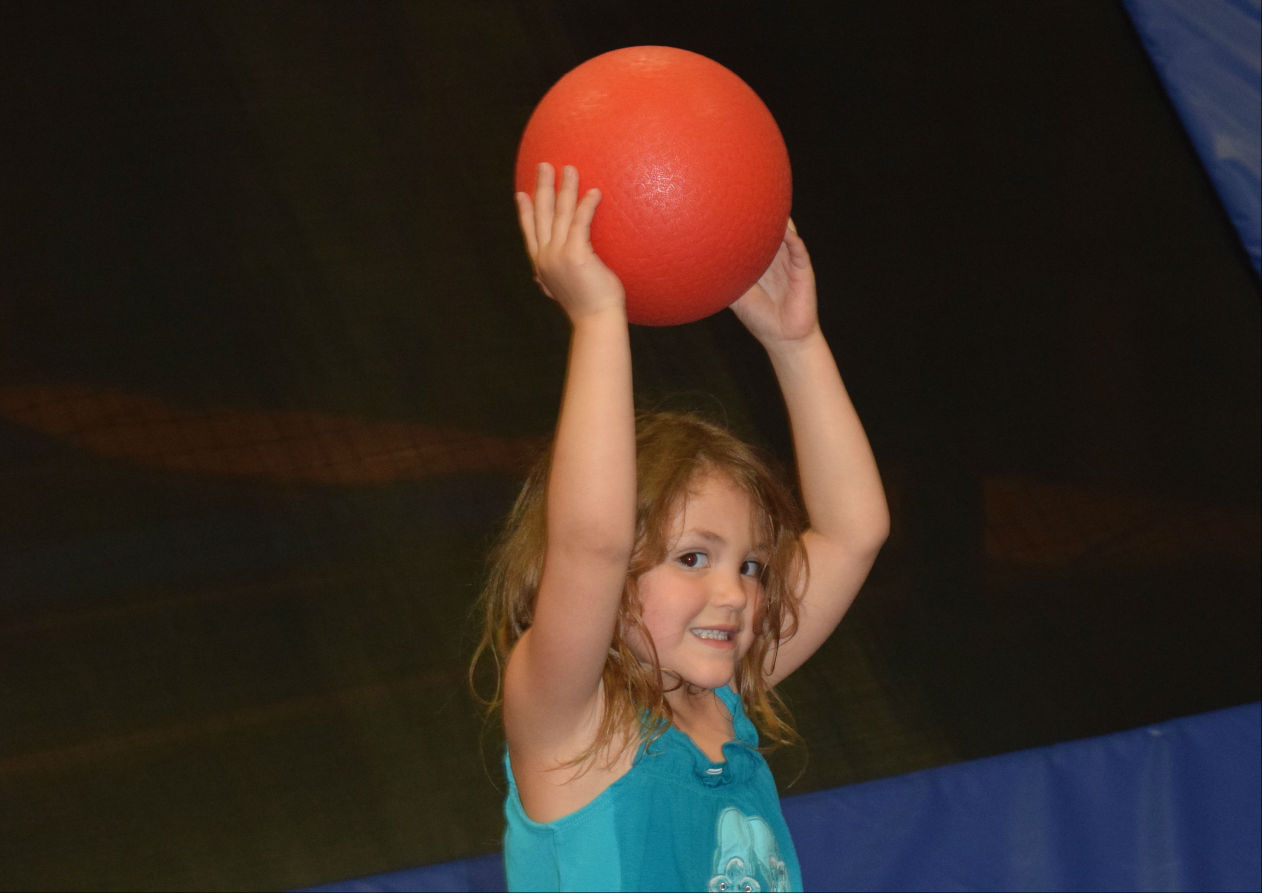 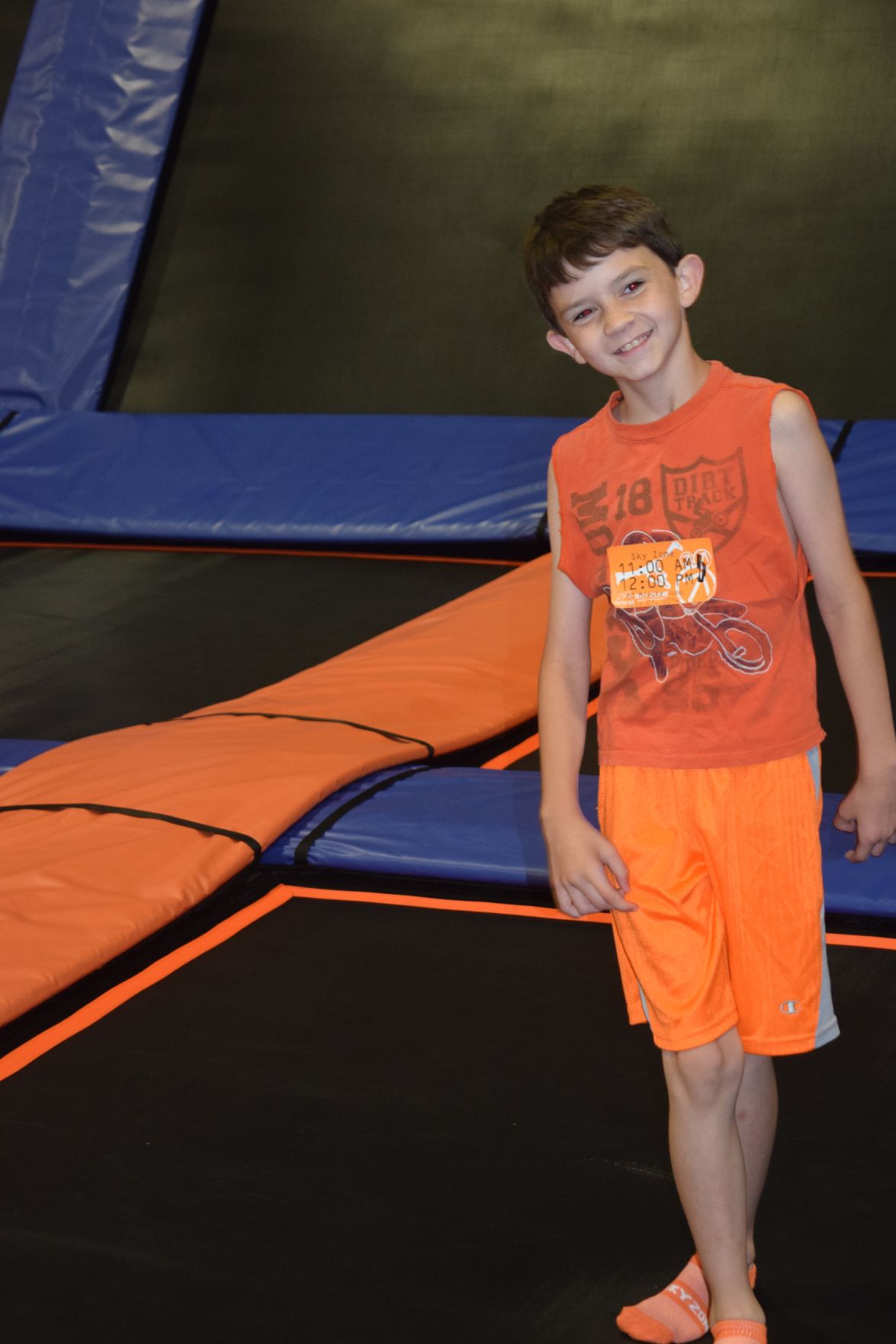 Sky Zone — that indoor trampoline park you've probably heard about — has just opened in Lancaster, and I've decided (with encouragement from two energetic kiddos) that I must experience the thrill of fitness that flies high. The excitement of trampolines as far as the eye can see. The adrenaline rush that comes with jumping.

So off we go to Hempstead Road.

"You're not going to have, like, some kind of heart attack or something, are you?" asks my grandson Connor, 10.

"Um, grandmas can jump, too," pipes in Arianah, soon to be 5 and not yet into sarcasm.

"Yeah, but they get out of breath. Plus they break legs and hips and stuff," retorts Connor.

I start to ask questions as I drive. Connor has seen the TV commercials, and he's researched the franchise on the Web. He knows everything.

"So," I say, "will we all be on a gigantic trampoline? Will I be jumping with teenagers? Will I fall down when other people jump? Are the walls made of trampolines, too? Is there an edge, like where people can fall off?"

"M'Mere," says Mister Double Digits. "You're just going to have to wait and see."

Cue the ominous music. The soundtrack that plays just before the grandmother is eaten by the shark, or breaks her hip.

We arrive. The room is bright and clean, full of blue and orange, and hopping with kids and Michael Jackson's "Billie Jean." Lots of parents — and grandparents — are observing — just watching! — from a sensible and smart area where they look down and see the trampolines from tables.

I hand the signed waivers to the friendly girl at the check-in desk. Waivers mean danger, right? I'm signing my life away! I'm waiving my right to blame anybody else but myself.

We each get a pair of sized "Sky Socks," orange with grips on the bottom. No-slip grips, to keep people like me from breaking hips.

As we put on our Sky Socks, a jovial Court Monitor named Jack rattles off The Rules.

"She can't do flips," says Connor. "Especially not double flips."

We proceed up the steps to the first trampoline area: a dodgeball court.

"Let's play that later," Connor suggests. "Let's go over to the Open Jump."

The Open Jump is a large area with a whole bunch of personal-sized trampolines that are separated by foam walkway thingies.

"One person to a trampoline," says the Open Jump Court Monitor. "No double jumping."

I try a tentative little jump. It's been maybe a decade since I've done this. (Our backyard trampoline broke and it's never been replaced after our kids were grown. And anyway, my favorite thing to do on that trampoline was to lie flat on my back under the summer stars, sky-gazing.)

Connor falls to the ground, laughing.

"The rules say don't lie down," I respond.

After about five minutes of this Super M'Mere stuff, my heart is pounding hard.

"Man, this is a workout," I pant. Sweating, I make my way off the Open Jump area to get my camera. I'll just take some pictures of the kids, rest up a bit.

Next, we head to another dodgeball court, where a game is in progress. We join the next round, and I'm out. Pretty quickly. Hey, teenagers are in this game, and their aim is good! They always shoot for the grandma girls first.

After a few games of dodgeball, we go to the Foam Zone, where 10,000 pieces of giant foam blocks cover what must be a trampoline bottom.

The kids do it first. I snap pictures. And then, I get in line.

"Do a flip!" encourage the kids. "You're allowed to do a flip into the blocks!"

I haven't done a flip since I was about 26, and that was probably into a swimming pool.

The kids do flips. I just jump in, gently. I fall into the foam, which is kind of like being in a ball pit, but with a different shape. And it's foam. And there's a trampoline. It's actually pretty relaxing . . . until you try to get up. And out.

"Uh, do you ever have to help older people get out?" I shout to the teenage Court Monitor. She just smiles. She doesn't know I'm serious. The kids are laughing.

I heave myself up and out of the Foam Zone.

We try the Basketball Court. I don't make a basket.

That doesn't work, either, but it's fun.

A few more games of dodgeball, another Open Jump, and our hour is up. Sixty minutes goes quickly when you're flying like a bird, like a plane, like a Super Grandma. I didn't have a heart attack. My legs are not broken, and neither is a hip.

"That was great," raves Arianah. "I can't wait to go back to Sky Zone!"

Me, neither. Next time, I might try a flip. Or not.