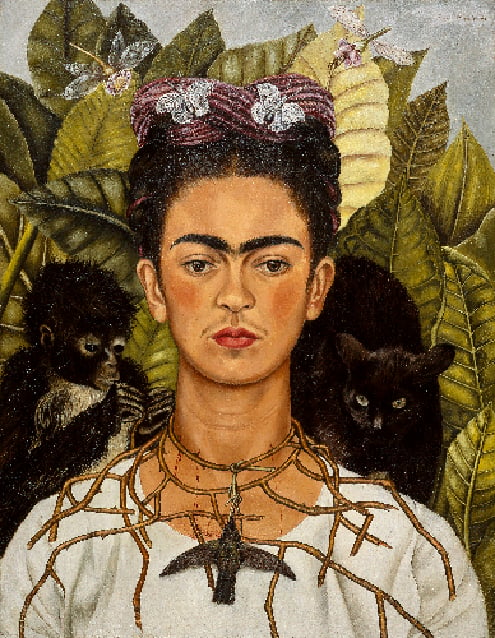 "Self-portrait With Thorn Necklace and Hummingbird" 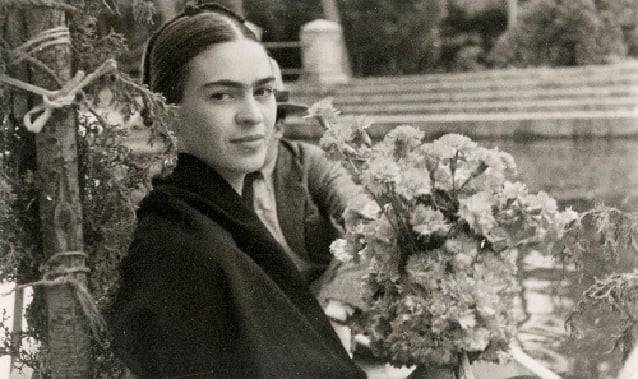 Frida Kahlo and flowers, from a 2008 exhibit at the Philadelphia Museum of Art. 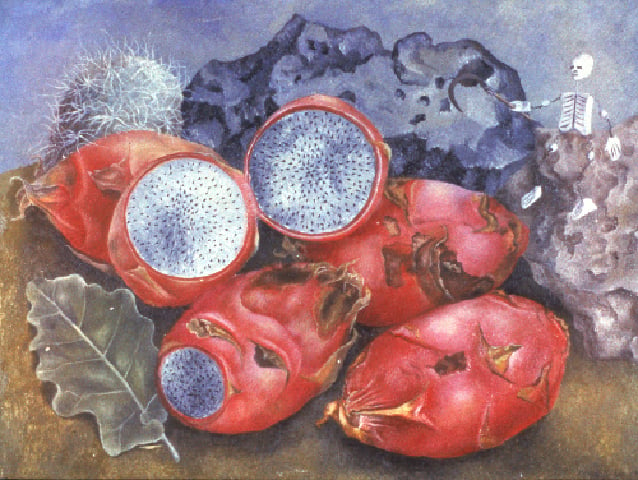 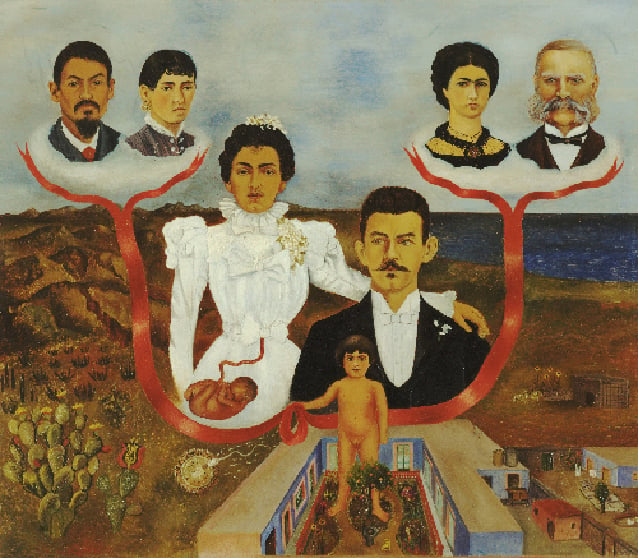 "My Grandparents, My Parents, and I (Family Tree)" 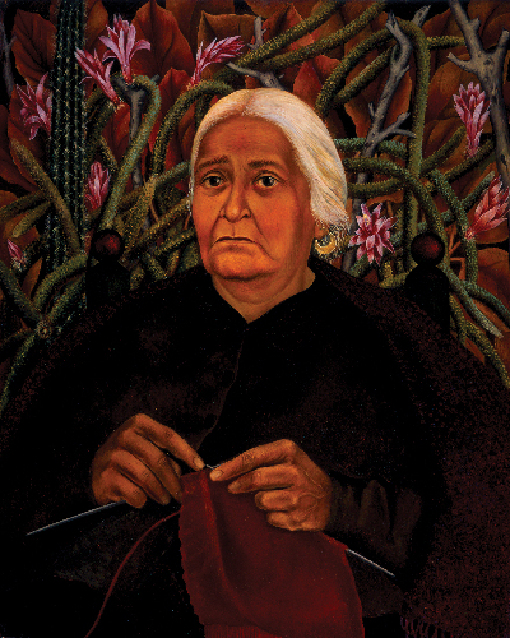 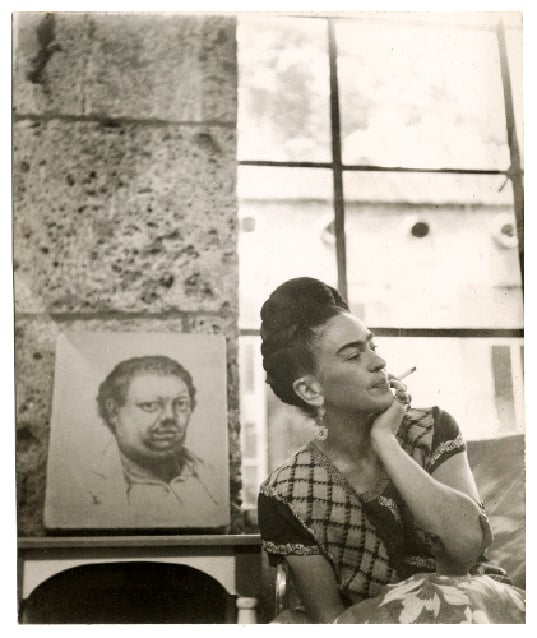 One of many photographs from the private collection of Frida Kahlo on display at Philadelphia Museum of Art.

"Self-portrait With Thorn Necklace and Hummingbird"

Frida Kahlo and flowers, from a 2008 exhibit at the Philadelphia Museum of Art.

"My Grandparents, My Parents, and I (Family Tree)"

One of many photographs from the private collection of Frida Kahlo on display at Philadelphia Museum of Art.

Frida Kahlo is one of the most famous female artists of all time. Over the next few months, we're going to become very familiar with one of her paintings, "Self-portrait With Thorn Necklace and Hummingbird," because it's the signature piece heralding a major exhibit of her work at Philadelphia Museum of Art.

The painting is a fine example of her series of expressionless, head-and-shoulders self-portraits - each marked by her distinctive single-wing eyebrow - that stare back at you as though you're looking into a mirror. The museum has gathered 11 of these arresting portraits along with 29 other paintings to celebrate the centenary of her birth. The exhibition is not as large as the retrospective at London's Tate Modern a couple of years ago, but nevertheless it should please Kahlo devotees with the following major works: "Frieda and Diego Rivera" (1931), "Henry Ford Hospital" (1932), "My Dress Hangs There" (1933), "A Few Small Nips" (1935), "The Suicide of Dorothy Hale" (1939), "The Two Fridas" (1939), "Diego and Frida 1929-1944" (1944), "Moses" (1945) and "The Love-Embrace of the Universe" (1949), together with two pictures that have never before been displayed in public, "Me and My Parrots" (1941) and "Magnolias" (1945).

Virtually all of the paintings revolve around Frida and reflect the personal, political, historical and cultural interests that pervaded her life. The exhibition organizers have done a good job explaining all this with captions and a 20-stop audio tour in both English and Spanish, the artist's mother tongue.

Kahlo (1907-1954) was raised in a suburb of Mexico City. "My Grandparents, My Parents and I (Family Tree)" (1936) lays out the Kahlo genealogy, showing her grandparents, parents and three images of the emerging Frida from the moment of her conception, as a sperm zeroes in on an egg, to the fetus growing in her mother's womb, to a little girl standing in the family home. Her mother was half Mexican Indian and half Spanish; her father was a German immigrant. This bloodline was at the root of Kahlo's struggle to reconcile her mixed-race cultural heritage with the changing social and political order (she was an avowed communist) of the 20th century. This tension shows up in many of her paintings.

Not that she ever intended to be a painter. Kahlo wanted to be a doctor, but at the age of 18 a collision with a tram on a bus ride home changed all that. The impact broke her spine in three places and fractured her right leg, collarbone, ribs and pelvis.

From 1925, her life became a battle against the slow deterioration of her body. Flat on her back and faced with months of inactivity, she took up painting with an easel suspended over her bed (the setup is shown in her pain-filled painting "Without Hope," [1945]) and discovered a talent she never knew she had. Using herself as a subject, she painted her first self-portrait from a mirror rigged over her head.

Throughout the exhibition, startling and often disturbing images of Kahlo's broken body and its attendant problems assail you from every side. "The Broken Column" (1944) portrays her damaged vertebrae as a fractured column held together with a therapeutic steel corset resembling some medieval instrument of torture. Nails of anguish pierce her skin, and all is set against a bleak landscape with dangerous-looking fissures.

Kahlo was an ardent student of her Mexican-Indian heritage and the culture's transition from ancient to modern ways. This finds expression in several paintings including "Self-portrait on the Borderline Between Mexico and the United States" (1932). On one side is pre-Columbian Mexico, a primitive and somewhat barren landscape with Aztec artifacts and flowers; on the other stand the mighty Ford auto factories and American electrical trappings.

Her paintings also portray the consequences of what she described as the second disaster in her life, her relationship with the most famous artist and muralist in Mexico, Diego Rivera. Twenty years her senior, with a string of illegitimate children and a failed marriage behind him, Diego entered into a stormy union with Kahlo. They married in 1929, divorced 10 years later and remarried a year after that. Diego had a major problem with fidelity and even claimed his doctor had advised him against it for the sake of his health. Things came to a head when Diego had an affair with Kahlo's younger sister.

The divorce prompted Kahlo to paint "Self-portrait with Thorn Necklace and Hummingbird" (1940), the centerpiece of this exhibition. It shows Frida wearing a necklace of thorny twigs with a dead hummingbird for a pendant. In her white dress, she looks like a Christian martyr. A monkey and a cat perch on her shoulders. Small animals and pets often appear in Kahlo's self-portraits as substitutes for the children her broken body would not let her bear. But this is no happy family: The monkey is tugging at the thorns and making her bleed, while the cat is getting ready to pounce.

There is much more at this exhibition related to other facets of Kahlo's beliefs, interests and politics. A display of more than 100 photographs from Kahlo's personal collection breathes life into her paintings. There also are examples of pre-Columbian folk art, which provide insight into her Mexican cultural heritage.

All in all, it's a fascinating and totally absorbing show by a first-rate artist. Kahlo once said, "I never painted my dreams; I painted my own reality." The exhibition does an excellent job of telling us about her reality and why she painted what she did the way she did. Allow yourself 2½ hours to do it justice.

The Frida Kahlo exhibition at Philadelphia Museum of Art, Benjamin Franklin Parkway at 26th Street, runs through May 18. The museum is closed Mondays. Tickets range from $10 (children 5 to 12) to $20. Children under 5 are admitted free. Discounts are available. Tickets include a free audio tour. For ticket information, call (215) 684-7469 or visit www.philamuseum.org.