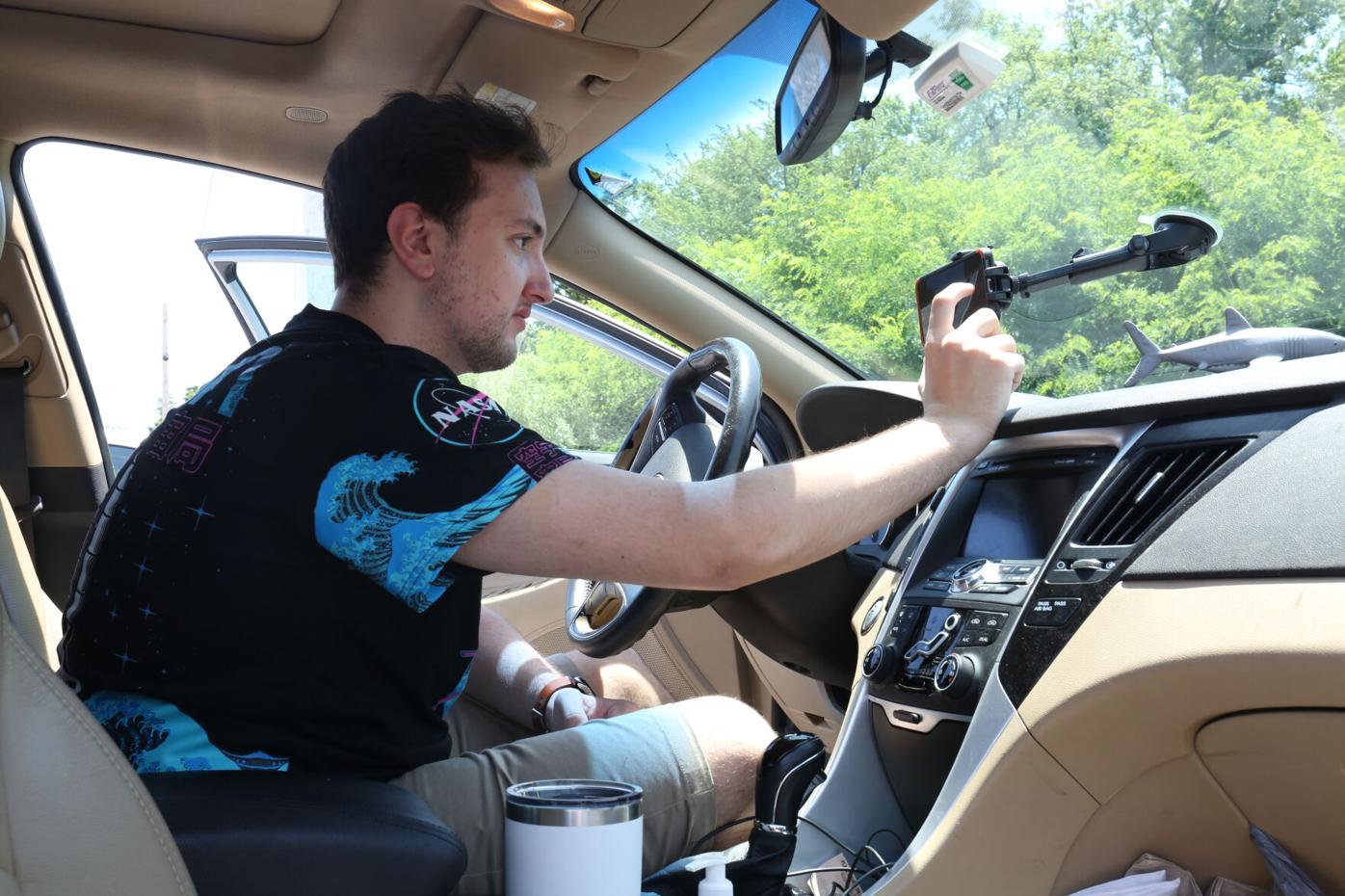 Franklin & Marshall student, Tyson Gates records videos of his road trips and post them online. Many viewers find the videos to be a form of ASMR. 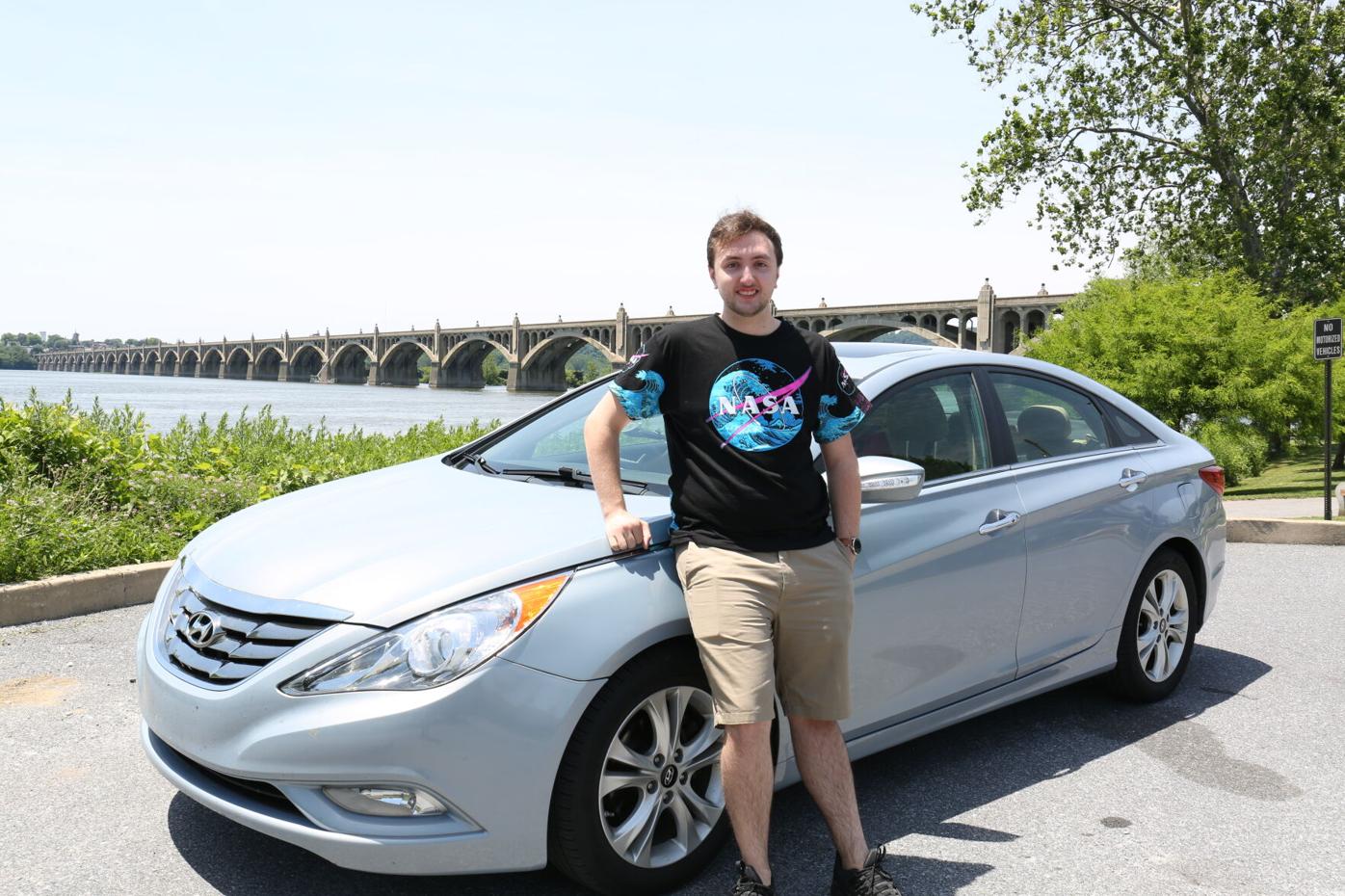 Tyson Gates, a junior at F&M, at the Columbia Crossing River Center. 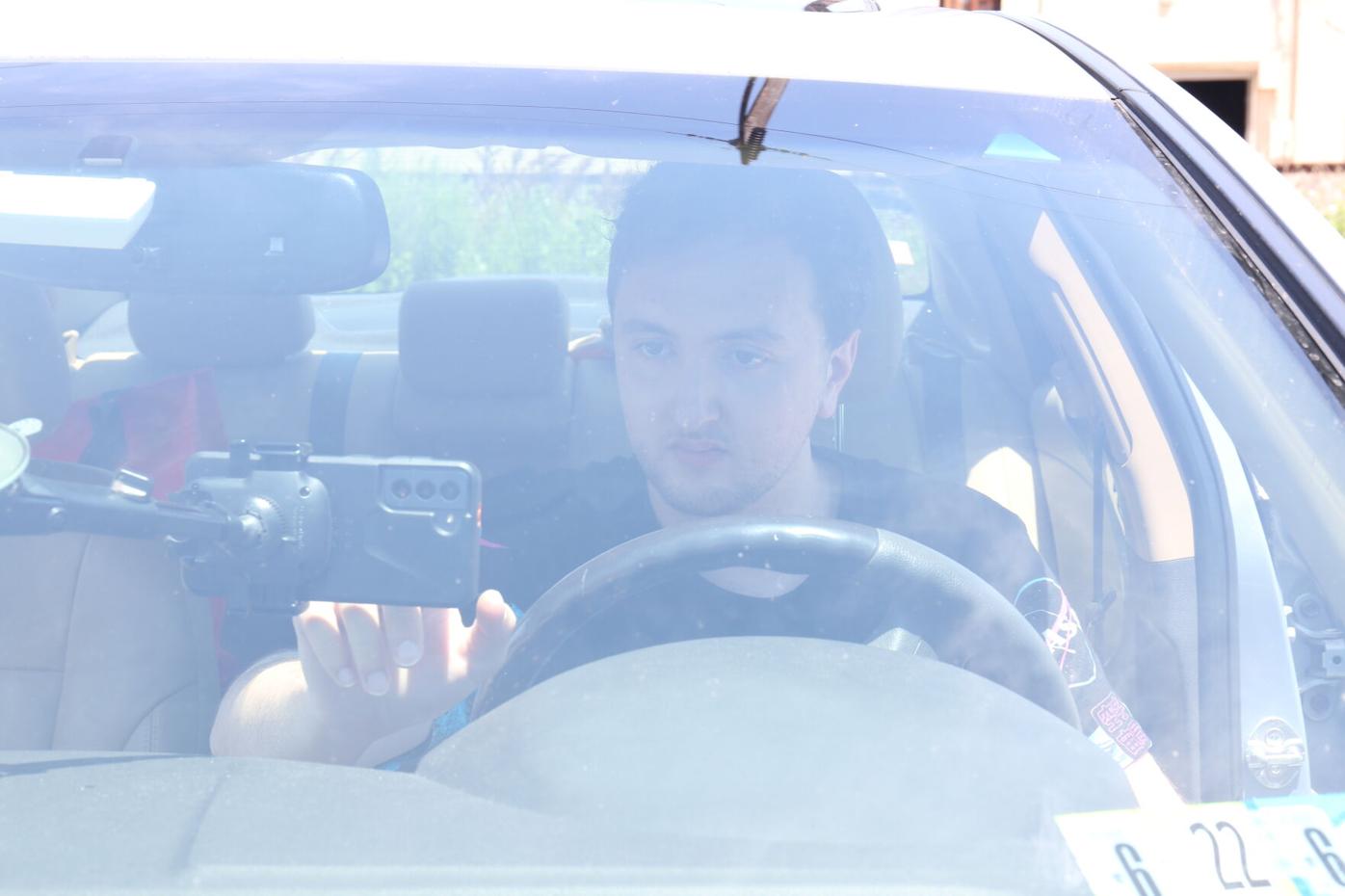 Tyson Gates, a junior at F&M, adjusts his phone on his windshield mount before making a recording of a drive around Columbia and Wrightsville.

Franklin & Marshall student, Tyson Gates records videos of his road trips and post them online. Many viewers find the videos to be a form of ASMR.

Tyson Gates, a junior at F&M, at the Columbia Crossing River Center.

Tyson Gates taps the brakes on his 2011 Hyundai Sonata and slows to a stop at the stop sign. He waits for a cyclist in a bright green shirt to pass, then exits the parking lot at the Columbia Crossing River Trail Center.

He makes a left and brakes again as he falls in behind a compact SUV at the red light. To the left, the leaves of a bushy plant growing beside the road tremble in the wind. The sky is bright blue. It’s a beautiful day for a drive.

Nothing happens for several seconds, then the light turns green and Gates slowly accelerates as he moves through the intersection.

Sliding the cursor ahead ten minutes and pressing the play button on YouTube finds Gates softly rumbling over Veterans Memorial Bridge spanning the Susquehanna River. Five minutes later, Gates is coasting down a leafy expanse of Lincoln Highway in Wrightsville.

This trip around Columbia and Wrightsville is one of many videos that Gates posts on his YouTube channel. Viewers feel like they’re riding along in the passenger seat of Gates’ Sonata, but without having left the couch.

Gates, a 20-year-old junior astrophysics major at Franklin & Marshall College, started recording his road trips and posting them online in 2020. The videos, besides being an interesting way to experience the rural roads and highways of Lancaster County and the East Coast, act as an ASMR stimulus for many viewers.

ASMR has crept into popular culture in the resurging popularity of Bob Ross’ “Joy of Painting” episodes, scenes in movies like “Battle of the Sexes,” and even a Super Bowl beer commercial. An entire subset of content creators, called ASMRtists, create videos featuring an array of sounds from soft whispering, to hair clipping, ambient nature sounds and more. All are designed to relax their audience.

Gates, of Etters, York County, posts recordings of his drive on his YouTube channel and Reddit (r/drivingasmr). The driving videos are gaining viewers, with about 3,000 views per month and one of a nighttime drive on I-4 through Orlando, Florida, surpassing 2,000 views. Gates says he didn’t watch many ASMR videos before recording and sharing his own, though he was aware of them.

“The ones that I knew about were mostly like whispering or like clicking fingernails and those didn’t really do anything for me,” Gates says. “But then I started making the driving ones, and I realized other people make those too.”

Gates says now he enjoys watching driving videos by other ASMRtists such as Mileage Mike, who also posts his trips on YouTube.

“Sometimes I even sit and rewatch my own videos,” Gates says. “It’s both relaxing and it reminds me of the drives that I’ve taken.”

Gates says he’s always been fascinated with driving and highways. Gates grew up in Florida but later moved, with his father, to Pennsylvania. From ages 11-15, Gates lived in the small town of Everett in Bedford County, a town that bills itself as “a beautiful destination along the Lincoln Highway.”

“I used to live underneath (U.S. Route) 30 in Everett, like literally under the highway,” Gates says. “Trucks on the highway going by would help me go to sleep.”

Gates recently covered the entire East Coast in a couple of months and says eventually he’d like to drive in all 50 states. He even has a favorite highway: Interstate 95.

“I went to Maine and then on the way back I took 95 the whole way, so that I could get more of it. There’s only a couple small patches of 95 that I haven’t been on,” says Gates, who spent many hours as a child with his family driving on 95 to visit relatives in Florida.

Gates says he’s even considered writing a research paper about I-95.

“There’s so much about 95 that makes it the most important highway in the country, if not the world,” says Gates, noting that the highway connects major cities.

Gates has always had an interest in cinematography and recording ambient sounds. During a return trip from Franklin County, Gates was inspired to hit record on his phone.

“I was coming back from Michaux State Forest,” Gates says. “I just noticed that the road was very empty, and I heard the sounds of the bugs in the woods and the wind through the trees, and I thought, this might be a nice way to relax. And I decided to record that trip.”

Watching Gates’ videos on YouTube is perfect for anyone who feels most relaxed in the passenger seat of a car, idly watching the scenery pass by and listening to the sounds of the road. He attaches his phone to a windshield mount and records the sights and sounds as he drives. The microphone automatically records binaurally – so the ambient noises seem ultra-realistic.

“I like the sound of the tires against the road and the air whooshing by the car or when cars pass me and I can hear them the whole way as they move from behind me to in front of me,” Gates says.

Gates has received lots of positive feedback on his ASMR videos. Besides just being enjoyable and relaxing, they can help some people with anxiety.

“There was one person recently that commented that they have a fear of driving on the highway,” Gates says. “But they saw one of my videos of driving on National Harbor and that helped reduce their anxiety.”

Gates’ YouTube channel has videos documenting everything from local drives around Lancaster and York counties to longer road trips up and down the East Coast from Maine to Florida. Some of the videos show the entire drive and some just a scenic portion of the trip. The videos, which play at normal speed, typically range from 15 minutes to two hours.

Gates makes many of these trips with his best friend, Holly Martin, a biology student at Millersville University. Martin says, in a sense, she gets to enjoy the road trips more than once.

“Tyson and I have gone on so many road trips together,” Martin says. “(The videos) are super relaxing. I love falling asleep to the sound of driving. It makes me feel like a passenger in the car.”

As summer hits its peak vacation season, Gates, who thinks people are often in too much of a hurry, sees the car trip as the ideal way to travel.

“Having that contact with the road is a way to more intimately see the areas around you,” Gates says – even if it is on video.

On a balmy afternoon in late May, some kids are getting up to some Christmas mischief.

Join Tyson Gates on his travels by checking out his YouTube channel at Tyson Gates on YouTube and on Reddit on his Driving ASMR (r/drivingasmr) subreddit thread.

Gates has traveled extensively up and down the east coast. But if you’re looking for a shorter, but still scenic road trip, Gates has a few more local recommendations.

“I really like going down to Cunningham Falls State Park in Maryland and driving historical MD 77 through there,” says Gates. “Maryland has a lot of trees and plants in the medians along the highways especially on 83. I think that’s a nice drive.”

“I like going to Michaux State Forest and Colonel Denning State Park in Cumberland Country,” says Gates. “The Shawnee State Park in Bedford County is another good one.”

Routes with odd numbers run north and south, while even numbered run east and west.

The lowest numbered east-west routes are in the south. For example I-10, the southernmost route stretches from Santa Monica, Calif. to Jacksonville, Fla., while I-90 runs from Seattle, Wash. to Boston, Mass.

In 1950, 7th grade in one-room schoolhouse made memorable by new teacher [I Know a Story column]

Two distinct happenings in the summer of 1950 stand out in my mind: The beginning of a war and meeting my new seventh grade teacher.

Intergenerational conflict is one of the oldest themes in comedy.

This Lancaster ophthalmologist has an eye for nature photography; see his work at the North Museum

A new nature photography exhibit at the North Museum’s STEAM Art Gallery celebrates taking a closer look at the world around us.

DAUPHIN -- An archaeological dig in Fort Halifax park revealed a fort dating back to the Seven Years War according to media reports.