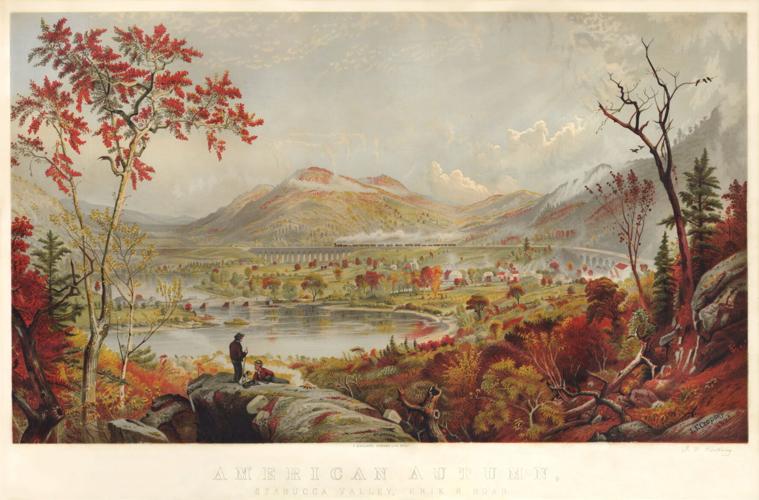 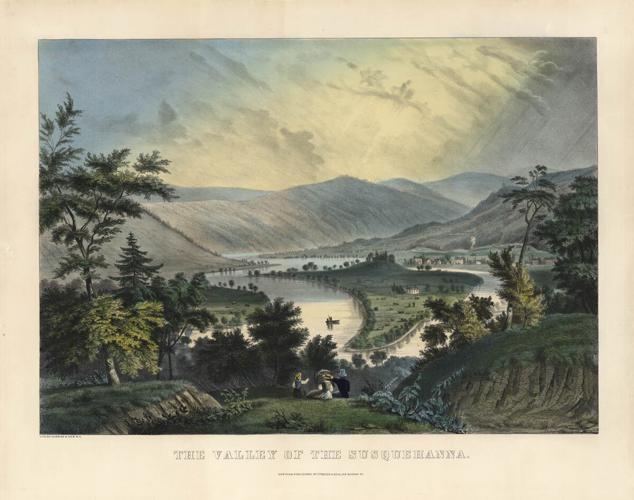 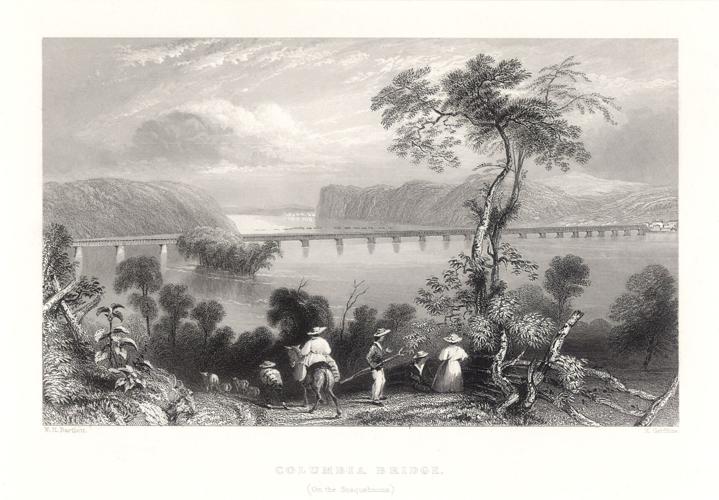 A 1838 steel-plate engraving from William H. Bartlett’s “American Scenery” is featured in the “Drawing on the Susquehanna” art exhibit at the Demuth Museum. 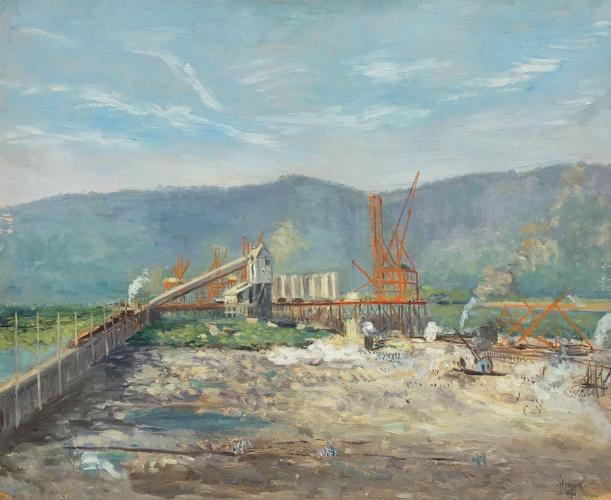 “Construction of the Safe Harbor Dam” a 1930 oil on canvas painting by the Pennsylvania Dutch artist Harry Martin Book is one of the works featured in the exhibit. Construction on the dam began in April 1930 and was completed in December 1931. 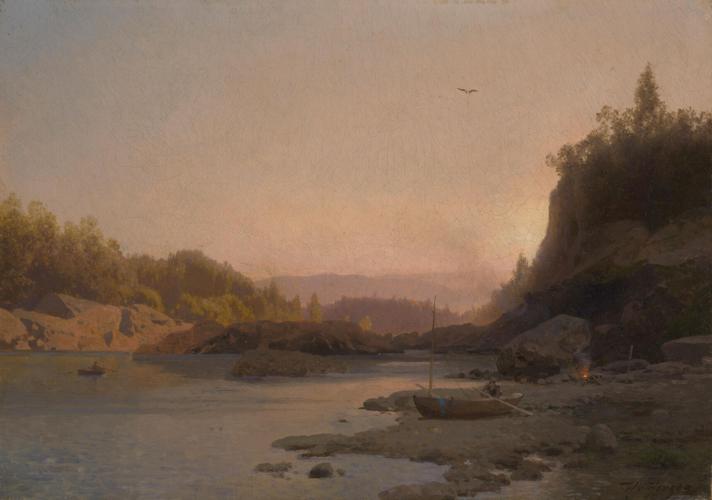 A painting by Herman Herzog will be a part of the Demuth Museum's "Drawing on the Susquehanna" exhibit.

The Susquehanna River has always been an important source of inspiration for painter, mixed media artist and curator Rob Evans. Evans, 62, grew up in the suburbs of Washington, D.C., but spent the summers at his grandparents’ house in the hills of Wrightsville roaming the forests.

“It was like paradise,” says Evans, who now lives in a farmhouse in Wrightsville overlooking the river. “The river kind of permeated my psyche. It really became a part of who I was and who I would eventually become.”

“Drawing on the Susquehanna: Four Centuries of Artistic Inspiration and Commerce” features 60 works of art spanning, primarily, from the early 1600s to the early 1900s and is on display at the Demuth Museum in Lancaster from Aug. 6 to Oct. 30.

“The exhibit is a good representation of the river and how it influenced artists from centuries ago to present day,” says Greta Rymar, the collections and exhibitions coordinator at the Demuth Foundation. “The show is really important and interesting because it combines fine art, nature and history to engage the audience.”

The river as a muse

Though Evans isn’t including any of his own work in the abridged version of this traveling exhibit at the Demuth, he has featured the Susquehanna River prominently in paintings of the dramatic sweeping views from his grandparents’ former “Roundtop” residence as well as moody atmospheric images of the river from different views from the shores. The river is a major muse for Evans the artist, but as a curator, Evans is making the case for the Susquehanna River as the original source of inspiration for American landscape painters, and even James Fenimore Cooper, one of the country’s earliest novelists.

“The American landscape school really was born out of the Susquehanna and that led to the Hudson River School, which later got all the glory and the name attached to it,” Evans says. “But the Susquehanna, I think, had an even earlier impact.”

To support this theory, Evans has included several images and artifacts, including a book with an engraving of a painting by Thomas Cole for his close friend James Fenimore Cooper’s novel “The Last of the Mohicans” that predates the Hudson River School. An earlier novel, Cooper’s 1823 “The Pioneers” also called “Sources of the Susquehanna” takes place in the headwaters of the Susquehanna in New York and, Evans says, is really the first major American novel set in America.

Perhaps a stronger piece of evidence for Evans’ theory featured in the exhibit is a rare book he was able to obtain through the help of a patron of the arts. “Lucas’ Progressive Drawing Book” by Fielding Lucas Jr. was published in 1827 is an instructional drawing manual consisting of 16 hand-colored images, mostly rivers, five of which are the Susquehanna River.

“Drawing on the Susquehanna” begins with an even earlier piece of art: a piece of a Native American petroglyph that broke off a rock and washed up at the Safe Harbor Dam. The petroglyph was a part of an archeological collection Evans was able to acquire along with a couple other artifacts.

“They were really the first true artists of the Susquehanna — long before the Westerners came and kicked them out,” Evans says. “They were using actual river materials like clay to make pots.”

The exhibit flows through time to see how artists, including local painters like Lloyd Mifflin of Columbia and Julius Augustus Beck of Lititz, depicted the river and the ever-changing landscape.

“What’s really fascinating about the exhibit is you see through the eyes of artists the gradual progression,” Evans says. “You see the wars between the native population and the settlers, you see them eventually get pushed out, then you see the development along the shore — the canals and railroads and then eventually the dams and power plants leading up to what we have today. It’s all documented by artists over 400 years.”

The exhibit tracks artistic interpretations of the changes of the river, the landscape and the people that live and work along the river, but it also tracks the way art was made and disseminated to the public. The exhibit features prints from books sold via subscription that people would be able to hang on their walls, marking the first time an average person could own something by an artist like Thomas Cole.

“Many of these artists used the current printing technologies of the time to get their work out there,” says Evans, who also experiments with technology and art with his mixed media work or his line of NFTs. “It’s the beginning of mass production and dissemination of the artist’s work.”

Artists also partnered with newspapers, timber companies and other businesses to document what was happening along the river, Evans says. And lithographs and prints of bridges, railroads and canals being constructed along the river appeared on the front pages of newspapers across the country. With artists doing the river’s public relations work, the Susquehanna quickly became a national and even international destination.

Some of the artists partnered with timber companies, other businesses and newspapers to tell the stories of what was happening along the river. “It’s amazing to me how much the Susquehanna has been sort of forgotten about,” Evans says. “It was, at one time, one of the most important rivers in the nation.”

What: Drawing on the Susquehanna: Four Centuries of Artistic Inspiration and Commerce.

Cost: Admission is by donation with a suggested donation of $5 per person.

The 1719 Museum looks to grow programming with a working 18th century garden; here's how you can volunteer

An 18th century garden was everything from a source of food to an apothecary.

Hang out in a Columbia cemetery at this September fundraiser; here's how to get tickets

The picnic in the cemetery features live music, dancing and some history.

The largest dollhouse built by late Lancaster County craftsman is up for auction; here's how to bid

The biggest of Benjamin Brubaker's tiny toy houses is featured in Morphy Auctions Aug. 9 and 10 sale.

Soft pretzels, sold on the street from a basket, were big business in the 1960s [I Know a Story column]

If you frequented downtown Lancaster in the mid-1960s, surely you remember a gentleman by the name of Vic Rittenhouse, who sold soft pretzels …

From ancient Rome to Jazz Age Chicago and from an Amish farm to 19th-century London, local stage companies will take audiences on a world tour…

Heralded as America’s “refugee capital” of the east in 2017 by the BBC, Lancaster city is one of the most culturally diverse cities of its siz…

Wrightsville Borough Council in York County approved a noise ordinance at its Aug. 1 meeting, responding to complaints from residents about lo…

Eleven Lancaster County artists have been named finalists in the 55th annual Art of the State exhibition, the State Museum of Pennsylvania ann…

“Rare food for a lunatic” ... “a thing that happens once in a million years” ... “Shakespeare, could he read it, would be glad that he was dead.”

Make art with your dog at this event, which benefits the Lancaster Center for Animal Life-Saving

Dogs can get their paws dirty in the name of art during LSJ Studios' two-day fundraising event.