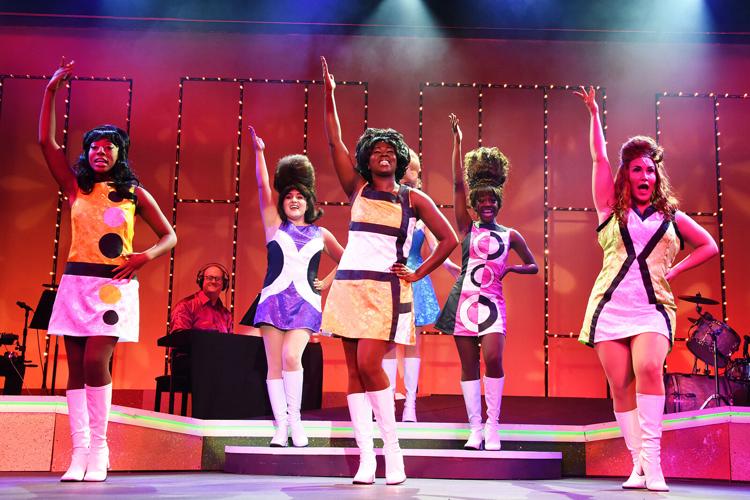 The cast of the jukebox musical “Beehive,” opening Jan. 21 at the Dutch Apple Dinner Theatre, performs songs by 1960s artists from Lesley Gore to Aretha Franklin. 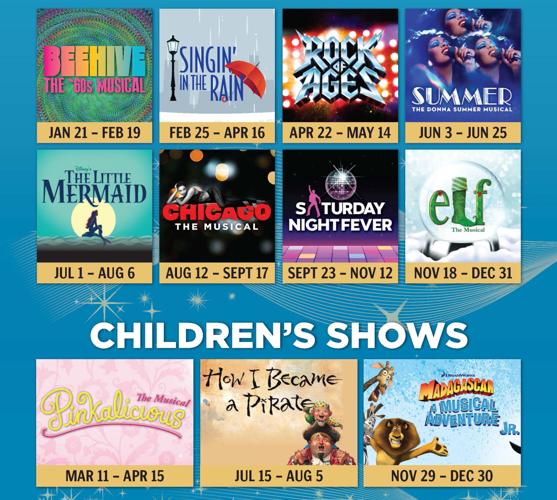 The Dutch Apple has a varied season of musicals in store for 2022 audiences. 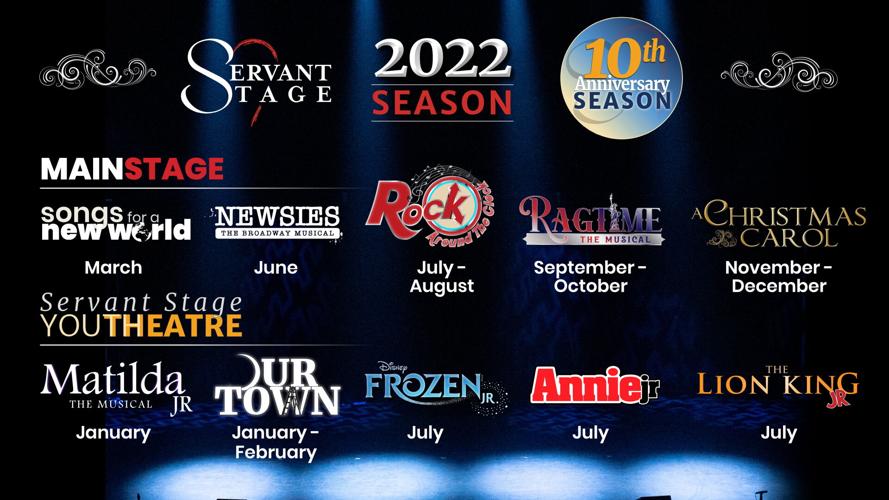 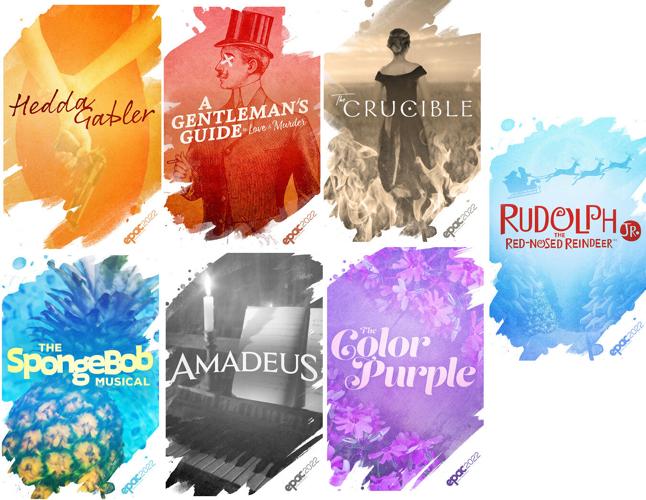 Theaters in Lancaster County have had to deal with a variety of issues since the COVID-19 pandemic began — from months of being completely shut down to navigating rules about vaccinating, masking and social distancing.

Many area theater companies have announced their 2022 seasons, which they’re opening over the next couple of months.

This is the first in a series of upcoming stories about local theater companies’ 2022 seasons of musicals and plays.

The Dutch Apple was one of the first theaters in the area to reopen after the COVID-19 pandemic hit — upgrading its ventilation system, making changes to how its buffet was served and operating at reduced capacity in order to keep tables socially distanced.

“We’re pretty much back to the way we were, pre-COVID,” says David Prather, president and co-owner of the Dutch Apple. “We’ve put all the tables and chairs back the way they were, and the buffet is the way it was, as well.”

“It is a crowd favorite,” Prather says. “It’s basically a jukebox musical of all the favorite female groups of the ’60s,” such as the Chiffons and the Supremes, and female singers from Aretha Franklin to Janis Joplin.

“It’s a Broadway staple,” Prather says. “We are currently doing it in our theater in Florida. ... It is a brand-new production with new sets and costumes.

“We like to have kind of an old-school Broadway musical favorite in our lineup each year, and ‘Singin’ in the Rain’ fits that bill,” Prather adds.

“It’s a show we’ve put in there to kind of draw upon a younger clientele,” Prather says. “It’s an ’80s hair band kind of jukebox musical that was made into a movie with Tom Cruise ... and it played on Broadway for quite a long time. It has kind of a cult following because of the songs that are in the show.”

— “Summer: The Donna Summer Musical,” June 3-25. This musical about the life of disco queen Donna Summer is currently on tour across the country and will make a stop at the Hershey Theatre on Feb. 14 before landing at the Dutch Apple. “The music is great, and they do a great job.” In the show, Summer is played by three actors representing three stages of her life.

Prather says the theater is working to bring new, fresh titles to the dinner theater audience — this Summer show being an example.

— “The Little Mermaid,” July 1 to Aug. 6, based on the 1989 Disney film. “‘Little Mermaid’ is probably our biggest show of the season,” Prather says. “Typically, we do a big, family-friendly musical for the summer, and this one marks all those boxes. We’re looking to do a lot of projections for this,” and adding some other surprises.

— “Chicago the Musical,” Aug. 12 to Sept. 17. “This is going to be exciting, because this is the 25th anniversary of the Broadway (revival),” Prather says. “This is the start of a national tour that will be debuting at the Dutch Apple, and it will be going on about a year-and-a-half international tour. This is direct from Broadway. It has all the Broadway creatives, including the choreography and the costuming.”

— “Saturday Night Fever,” Sept. 23 to Nov. 12, based on the 1977 film about young adults looking for love and dance trophies on the disco floor. “It’s another one of the titles that didn’t get produced in 2020 (because of COVID-19),” Prather says. “It’s the story made famous by John Travolta’s movie, with all the songs from the Bee Gees.”

— “Elf the Musical,” Nov. 18 to Dec. 31, based on the Will Ferrell film about super-cheerful Buddy the Elf looking for his real father.

“We only got about two weeks of that show in in 2020, so we’re bringing it back,” Prather says. “It’s another fan favorite.”

The Dutch Apple is located at 510 Centerville Road. Information and tickets: dutchapple.com or call the box office at 717-898-1900.

Tickets are available for matinee and evening shows with lunch or buffet or served dinners, and also for show only.

“If I had to say what the theme of the season is ... (the shows) are all about being your authentic self,” says Edward R. Fernandez, artistic director at Ephrata Performing Arts Center. “It’s personal authenticity versus what society demands. That is, basically, what the characters in these plays are dealing with.”

— “Hedda Gabler,” March 17-26, by Norwegian playwright Henrik Ibsen in which a bored woman seeks to break away from her marriage and life — which leads to her downfall. Fernandez says he fell in love with the play when he saw a PBS production when he was 14.

“I’ve wanted to do it for a very long time,” he says, “and we’re trying to do something completely different with it.” Fernandez says he was inspired by a streamed (London) National Theatre production of the play that “blew all the turn-of-the-century cobwebs from the show and made it so vital and real and up to the moment.”

— “A Gentleman’s Guide to Love & Murder,” April 28 to May 14. This English musical comedy tells a tale of hidden royal lineage and a potential murder, and features one actor playing the roles of a whole family.

“It’s based on a British movie and a book, and it’s very witty and it’s funny and it’s charming,” Fernandez says.

— “The Crucible,” June 16-25, “is a show I’ve always loved because I’m a history buff,” Fernandez says. “And there are some things I just obsess about, and one of them is the Salem Witch Trials.

“I think it’s Arthur Miller’s best work,” Fernandez says. “It’s so accessible and it’s so exciting and melodramatic, and it has all the themes I love in a show.”

Fernandez says he’s going to be approaching the work in an experimental way.

“I don’t want to give too much away,” he says, “but it’s going to be different.”

— “The SpongeBob Musical,” July 28 to Aug. 13. The show, based on the Nickelodeon animated series, follows SpongeBob Squarepants and his pals as they try to save their town of Bikini Bottom from a volcano.

“It’s a charming show, and it’s a show for the family,” Fernandez says. “It’s not seen around here a lot. ... It really tells a nice story.”

“It’s a show I just love,” he says. “It’s extremely well written, and it really is about art and it’s about creation.”

— “The Color Purple,” Oct. 13-29. “It’s a show that has not been done around here, so it’s going to be new to our subscribers, and a different voice,” Fernandez says. “And it’s going to be a professional production. The board has raised a lot of money, and we’re actually going to pay professionals to do it.”

— “Rudolph The Red-Nosed Reindeer – The Musical Jr.,” Dec. 2-18. The musical is based on the popular Rankin/Bass stop-motion-animation TV show that’s charmed audiences since 1964. “I loved ‘Rudolph’ growing up, so it’s nostalgia, and a great Christmas show,” Fernandez says. “It’s the youth show, so I’m just upset I can’t audition for it ... because I want to play Yukon Cornelius.”

Everyone who performs at EPAC this year must be fully vaccinated, Fernandez added.

Information and tickets: ephrataperformingartscenter.com, or call the box office at 717-733-7966, ext. 1.

Servant Stage Company is starting another season of presenting shows at a mix of indoor and outdoor venues around Lancaster County, with a pay-what-you-will pricing model designed to make theater accessible to more people, says the company’s executive director, Johnathan Bauer.

“The first two shows of the year are happening at the same time,” Bauer says. They are two presentations by the company’s youth theater program: “Matilda Jr.” and “Our Town.”

— “Our Town,” weekends Jan. 28 to Feb. 6 at the Magic & Wonder Theater, presented by a cast of 20 students ages 12-19. The Pulitzer Prize-winning play by Thornton Wilder tells the story of the everyday lives and loves of the early 20th-century residents of Grovers Corners, New Hampshire.

“We’ve been doing a lot of musicals for that youth program,” Bauer says, “so this is our first time doing a straight play. We wanted something that would be a different sort of challenge and a different educational experience.”

— “Songs for a New World,” weekends March 11-27, at the Junction Center, 1875 Junction Road, Manheim, is Servant Stage’s first main-stage show of the 2022 season. The theatrical work by Jason Robert Brown is a series of songs and characters tied together around the theme of a moment of decision.

“Jason Robert Brown is just a masterful songwriter, and this is our first time doing a work by him,” Bauer says. “It’s so smart and intelligent — incredible songwriting — but, stylistically, it covers a variety of pop genres and it’s something that someone who doesn’t know anything about musical theater ... can enjoy and appreciate as well.”

“That’s just a show that appeals to most people — anyone who loves Broadway,” Bauer says. “It’s got all that high-energy dancing, but it’s also just a family-friendly, standing-up-for-what’s-right, seizing-the-day kind of a story that has a broad appeal to it.”

— “Rock Around the Clock,” July 8 to Aug. 15, touring across Lancaster County, including at Clipper Magazine Stadium.

“That’s an original musical revue — we’re creating it — but it’s kind of paying tribute to the 1950s rock ’n’ roll, and that’s one that will play ... at Clipper Stadium and in community parks,” Bauer says. “It’ll be a high-energy song-and-dance show with a live rock band.”

“We are very excited to be able to do (the show),” Bauer says. “It’s a show that’s very, very relevant right now, with very challenging subject matter, but it’s a lot of important subjects to tackle.”

— “A Christmas Carol,” Nov. 11 to Dec. 18, a play with music touring across Lancaster County, including performances at the Ware Center, 42 N. Prince St.

“This is becoming a tradition for us,” Bauer says. “This particular production of ‘A Christmas Carol,’ ... is adapted word for word from (Charles) Dickens, with music added so that even the songs themselves are taken directly from the novel. It’s been well received.”

Reservations are required for most performances. Information and tickets:

Here’s a sample of what’s opening at Lancaster County theaters this month.

As an audio description narrator, Kelly Brennan adds a voice to voiceless scenes.

The TV characters we love to hate [Unscripted column]

Lately, I seem to be spending time in the company of a bunch of people who are unlikable, ir…

The Zac Brown Band has been scheduled to perform in Hershey every year since 2014, and 2022 …

It's always a great time to hike in Lancaster County, with the county's several dozen trails open to the public year-round.

3 dogs - Thelma, Patsy and Noir - going to Puppy Bowl with Charlie's Crusaders, which adopts out of Lancaster

From Sondheim to Shakespeare and Amish to Elvis, 3 theater companies preview 2022 stage seasons

The approaching spring brings with it glimpses of warmer weather, along with the relaxing of COVID-19 restrictions in many indoor venues.

Two Lancaster County theater companies have announced the names of musicals that were previously unnamed, to-be-announced shows on their 2022 …

Early rhythm and blues and 1980s hair-band rock. A murdering heir to a British peerage and a woman hiding from danger in an Amish Country inn.…

The music of Jerry Lee Lewis will be heard, instead of the music of Donna Summer, at the Dutch Apple Dinner Theatre in June.