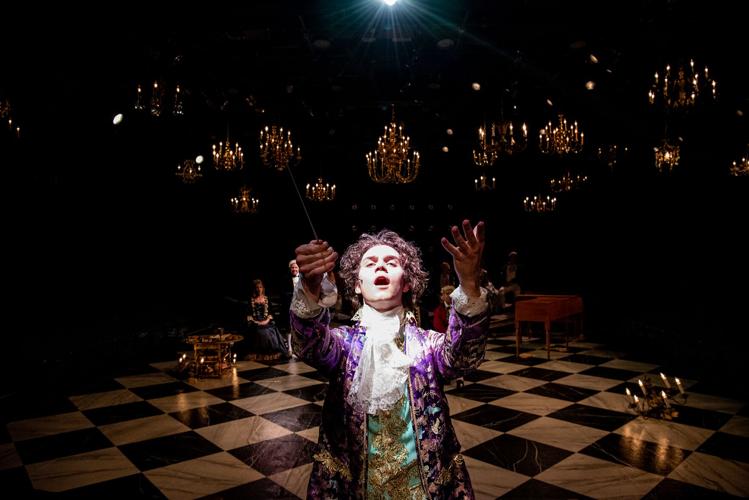 Ben Galosi stars as Mozart in “Amadeus” at Ephrata Performing Arts Center, which has show times tonight, Friday and Saturday. 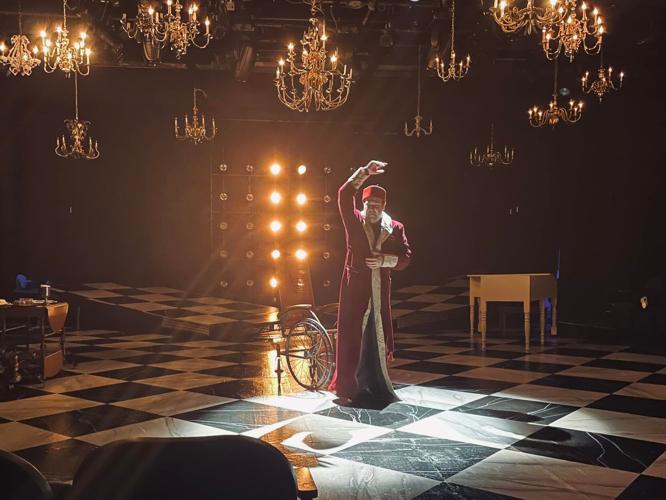 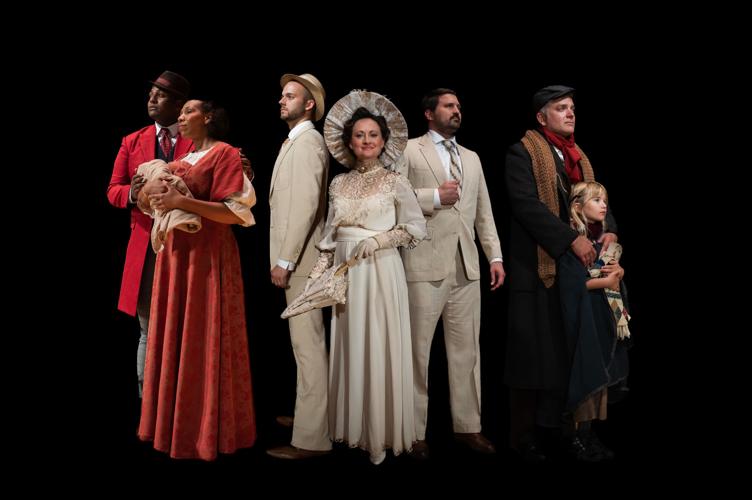 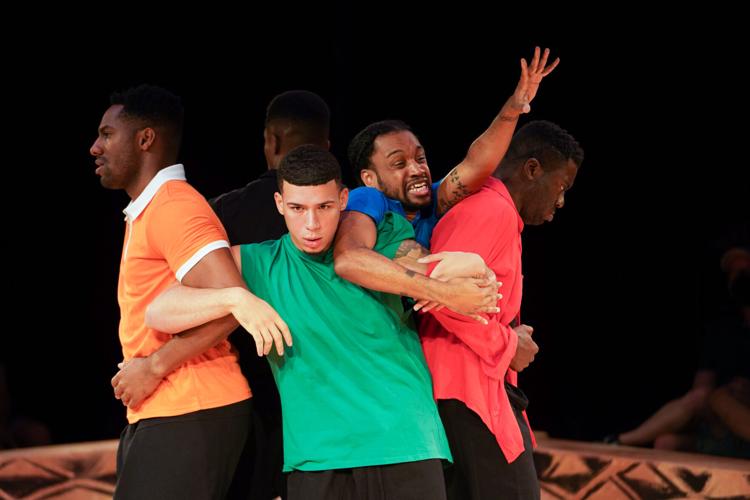 Cast members rehearse a scene from the choreopoem play “For Colored Boyz on the Verge of a Nervous Breakdown When Freedom Ain’t Enuff,” running through Sept. 25 at the Fulton Theatre. 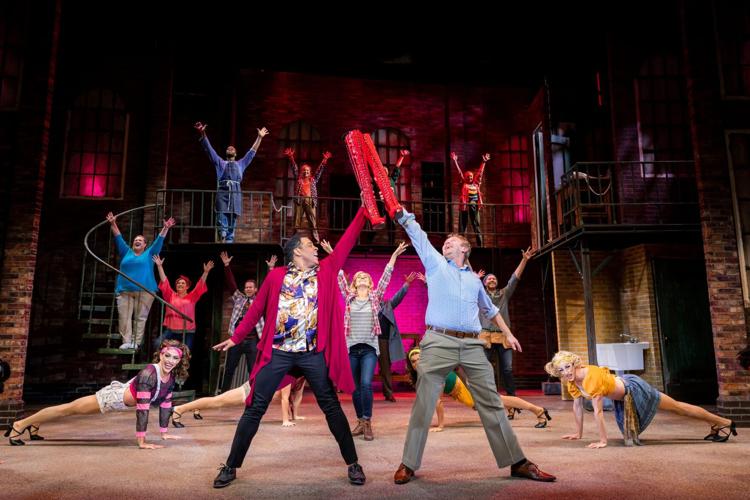 The cast of “Kinky Boots” performs in August 2022 at the Maine State Music Theatre in Brunswick, Maine. The show will move to the Fulton Theatre in September 2022 as the theater’s main-stage season opener. 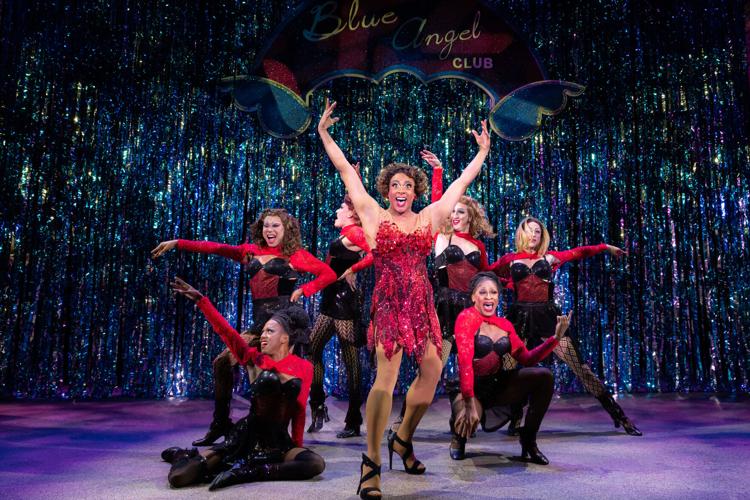 The cast of “Kinky Boots,” including Stephane Duret as Lola, center, performs in August 2022 at the Maine State Music Theatre in Brunswick, Maine. The show will move to the Fulton Theatre in September 2022 as the theater’s main-stage season opener. 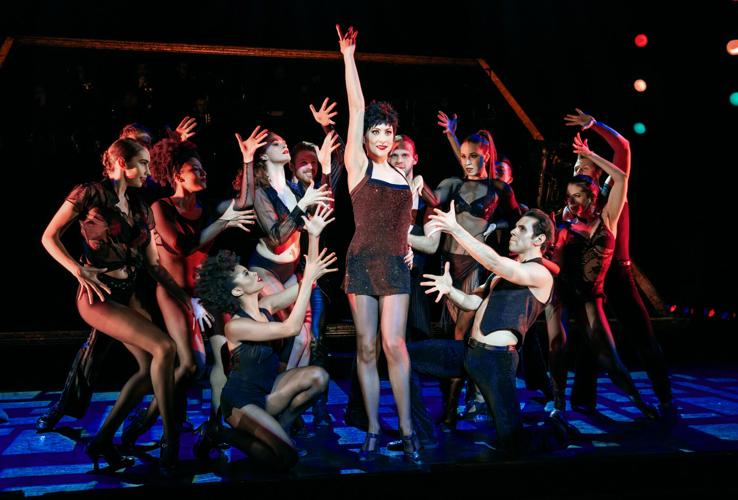 Logan Floyd, center, portrays with the ensemble performing the number "All That Jazz," in these photos taken during rehearsals of a 2020 national touring production of "Chicago." Floyd is Velma in the current Dutch Apple Dinner Theatre production. 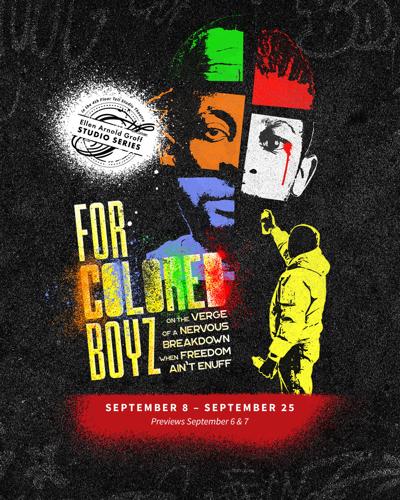 "For Colored Boyz on the Verge of a Nervous Breakdown when Freedom ain’t enuff," a play by Bryan-Keyth Wilson, is opening in September as part of the Ellen Groff Series at the Fulton Theatre.

Ben Galosi stars as Mozart in “Amadeus” at Ephrata Performing Arts Center, which has show times tonight, Friday and Saturday.

"For Colored Boyz on the Verge of a Nervous Breakdown when Freedom ain’t enuff," a play by Bryan-Keyth Wilson, is opening in September as part of the Ellen Groff Series at the Fulton Theatre.

Editor's note: A previous version of this story listed "Fade," a one-night staged reading, at Susquehanna Stage in Marietta. That reading has been postponed to Oct. 8.

These characters, along with the stories of multicultural communities establishing their place in early 20th-century America and of composer Stephen Sondheim’s beloved fractured fairy tales, are among the things audiences will experience in the plays and musicals opening on Lancaster County stages — and beyond — in September.

Here’s a taste of the shows that are opening, and continuing, in local theaters.

— Were 18th-century composers Antonio Salieri and Wolfgang Amadeus Mozart bitter rivals? Could Salieri really have poisoned the younger composer, or was that just a vicious rumor?

Playwright Peter Shaffer pondered these historical rumors, along with themes of faith, jealousy and revenge, as he wrote his Tony Award-winning play “Amadeus.” It opens Thursday, Sept. 8, at the Ephrata Performing Arts Center and runs through Sept. 17.

As an old man in the 19th century, Salieri recalls for the audience the story of how he found his popularity as court composer in 1780s Vienna threatened by a crude young genius, Wolfgang Amadeus Mozart. As Mozart and his wife, Constanze, struggle financially, Salieri seems to both be using his position to simultaneously help and hurt the couple.

— In 2021, the Fulton Theatre held its inaugural Festival of New Works: Stories of Diversity event. That festival, which produced readings of plays by writers offering perspectives from diverse voices and communities, produced a winner: “For Colored Boyz on the Verge of a Nervous Breakdown When Freedom Ain’t Enuff,” by Bryan-Keyth Wilson.

The play is being produced as this season’s first offering of the Ellen Groff Series, Sept. 8-25 in the Fulton’s fourth-floor Tell Theatre. Previews are Sept. 6 and 7.

The play is a choreopoem that gives voice to several men of color who are navigating their lives — past, present and future — amid the prevalence of disenfranchisement, racism, hyper-masculinity and stereotypes.

Performances are Tuesdays through Sundays.

— In March 2020, the musical “Kinky Boots” had just opened at the Fulton Theatre when it was forced to close because of the beginning of the COVID-19 pandemic.

The Tony Award-winning musical, with a book by Harvey Fierstein and songs by pop diva Cyndi Lauper, finally returns to the Fulton’s main stage Sept. 15 to have its run.

The musical, based on both a British film and a true story, tells the story of Charlie Pierce, who has inherited his family’s shoe factory. As he struggles to keep the factory going and his workers employed, Charlie finds common cause with Lola, a drag queen who inadvertently provides a solution for Charlie if he and his employees will keep an open mind.

Can manufacturing “kinky boots” — well-designed, large-sized footwear for Lola and her fellow drag performers — save the factory and Charlie’s relationship with his upwardly mobile fiancee? And will Lola and Charlie see they have more in common then it appears on the surface?

Audiences can find out Sept. 15 to Oct. 16, with previews Sept. 13 and 14. Performances are mostly Tuesday through Sunday.

— Diverse communities cross paths in turn-of-the-20th-century New York in the Tony Award-winning musical “Ragtime,” which Servant Stage Company will present Sept. 16 to Oct. 2 in the Performing Arts Center at Lancaster Mennonite School.Based on the 1975 novel by E.L. Doctorow and the 1981 film, “Ragtime” tells the stories of three communities — upper-class suburbanites, Eastern European immigrants and African Americans.

Mother, the matriarch of a society family, gets involved with Sarah and her boyfriend, Harlem musician Coalhouse Walker Jr., when a baby is found abandoned in her garden. Mother also meets Tateh, a Latvian immigrant with big dreams for himself and his daughter.

As Coalhouse gets into conflict with New Yorkers who damage his car, historical figures become characters in the musical, as well, from Harry Houdini to Booker T. Washington and J. P. Morgan to Emma Goldman.

The Servant Stage production is cast with more than 50 local and regional performers. Tickets are available for matinee and evening shows Fridays through Sundays. Performances are pay-what-you-will, but registering for tickets ahead of time is suggested. Visit servant

— Get out your bell bottoms, open-collared shirts, three-piece suits and platform shoes and get ready to see Tony Manero disco down when the musical “Saturday Night Fever” opens Friday, Sept. 23, at the Dutch Apple Dinner Theatre.

The jukebox musical tells the familiar story from the 1977 John Travolta movie: Tony leaves his dead-end life outside the doors of club 2001 Odyssey on Saturday nights as he rules the disco dance floor.

With humor, style and swagger, the musical explores the relationships among Tony, his friends, his family and Stephanie Mangano — the woman he falls for as the two rehearse for a disco dance competition.

Audiences will be grooving to disco-era anthems from “Stayin Alive” to “Boogie Shoes” and “Night Fever” to “Disco Inferno.” The show runs through Nov. 12.

Matinee and evening performances run mostly Wednesday through Sunday, and tickets are available with a meal or for the show only.

The Dutch Apple is at 510 Centerville Road, Lancaster. Tickets and information: dutchapple.com or 717-898-1900

— “Into the Woods,” Sondheim’s musical about what happens after the classic Grimms’ fairy tale characters think they’ve gotten their happy endings, will be presented as the fall musical of Lancaster Bible College’s Good Shepherd Players.

The students of the college’s Music, Worship & Performing Arts Department will perform the musical Sept. 16-24 in the Good Shepherd Chapel at the college, 901 Eden Road, Lancaster.

The Tony Award-winning musical, with a book by Franklin & Marshall College alumnus James Lapine, follows a baker and his wife, Cinderella and Rapunzel and their princes, Jack and his cow and other characters as they strive to get their wishes granted and contend with life’s consequences.

Tickets are available online, for Thursday, Friday and Saturday performances, matinees and evenings, at lbc.edu/events. The show is recommended for ages 12 and up.

— Broadway comes to the Hershey Theatre as the outrageous musical “The Book of Mormon” runs Sept. 27 to Oct. 3.

Created by Trey Parker and Matt Stone of “South Park” fame and celebrated Broadway composer Robert Lopez, the show is a satirical look at The Church of Jesus Christ of Latter-day Saints set to a score that’s a nod to other well-known musicals and theater tropes.

When two mismatched missionaries, elders Price and Cunningham, travel to Uganda to share their faith, they meet up with a warlord and villagers who they hope will respond to their message — a message that gets somewhat lost in translation through Cunningham’s embellishments.

This show delivers plenty of salty language and adult situations, so it’s strictly for grown-ups. Tickets for matinee and evening performances are available.

James, his cruel aunts Spiker and Sponge, a spectacular piece of fruit and a bunch of entertaining bugs will bring “James and the Giant Peach Jr.” to life at Susquehanna Stage in Marietta on Sept. 16-18.

The show is adapted from Roald Dahl’s popular children’s book about a boy who overcomes his parents’ deaths and his guardians’ mistreatment with a journey with his new insect friends.

Tickets are available for matinee and evening performances.

— “Chicago,” the Jazz Age black comedy about “merry murderesses” Roxie Hart and Velma Kelly and how their “razzle-dazzle” lawyer Billy Flynn helps them manipulate the court system, media and public opinion, continues through Sept. 17 at the Dutch Apple Dinner Theatre.

— Bird-in-Hand Stage’s political tale with an Amish twist, “Josiah for President,” continues through Oct. 21 at Bird-in-Hand Stage. A scandal-plagued congressman’s encounter with a simple, straight-talking Amish man of faith gives the politician the notion that Josiah would be a great man to run for president.

— Also at Bird-in-Hand Stage, the family-friendly “Ryan and Friends: Hilarity Happens!” continues through Oct. 22. The show features a comic take on Lancaster County life through comedy, music and ventriloquism.

Bird-in-Hand Stage is on the banquet level of Bird-in-Hand Family Restaurant & Smorgasbord, 2760 Old Philadelphia Pike, Bird-in-Hand. For tickets for either show, visit bird-in-hand.com/stage or call 717-768-1568.

Meet Pat Finnerty, the YouTuber who explains why some songs just stink [Unscripted]

Anyone can declare a song is bad.

'PAW Patrol' returns to Hershey in 2023; here's when tickets go on sale

'Friends! The Musical Parody' pokes fun at the '90s TV show; here's when it comes to Lancaster

Whether you're an original fan of the hit '90s sitcom "Friends," or someone who recently dis…

'The Staircase' on HBO Max, featuring Toni Collette and Colin Firth, has a Lancaster County connection

New year on stage: Leaders of Fulton and Prima theaters preview musicals and plays of their 2022-23 seasons

Two Lancaster theater companies had audience joy in mind as they planned 2022-23 seasons that kick off this month and next. The three differen…

While “Ragtime” is set in the early 20th century, its plotline sounds straight out of 2022.