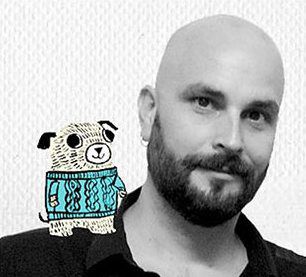 Zacharuah OHora is the author of "My Cousin Momo," the focal point of the One Book, Every Young Child campaign. 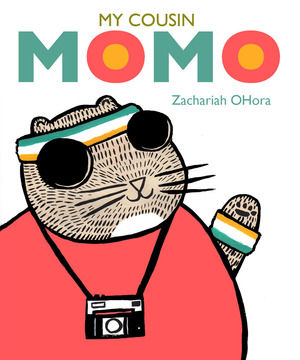 The cover of "My Cousin Momo" by Zachariah OHora.

Zacharuah OHora is the author of "My Cousin Momo," the focal point of the One Book, Every Young Child campaign.

The cover of "My Cousin Momo" by Zachariah OHora.

Zachariah OHora learned early on that he could trade his artwork for valuables.

When he was a fourth-grader, his classmates clamored for him to decorate the plain brown paper that covered their books with his fanciful drawings.

“I got good at drawing Smurfs and Garfields, and I started doing that on my own books,” OHora says. “It’s what I liked to do. And other kids would take notice of that and they would ask me to draw on their own books.

“Also, I would take payment in the form of candy bars.”

Later, when he was trying to establish himself as an artist, he would sometimes create artwork for small record labels. And the labels would sometimes send him vinyl record albums, something he now collects.

“We’ll definitely work for records and candy bars,” OHora says with a laugh.

OHora, who lives in Narberth, Montgomery County, with his wife and two sons (who are 8 and 10) is now an acclaimed children’s book author and illustrator. He no longer works for candy bars and records because publishers pay him money to create books, something that still amazes OHora.

“I still can’t believe that I can go in my studio and paint all day and someone will pay me for that,” the 44-year-old says.

OHora will share his passion for books and art when he visits Lancaster County to talk about his career and his book “My Cousin Momo,” which has been chosen as the focal point of this year’s One Book, Every Young Child reading program.

It is the second time that OHora has been chosen for the program. His first book, “Stop Snoring, Bernard!” was the subject of the 2012 campaign.

“It’s really cool to go all over Pennsylvania and meet lots of kids who otherwise wouldn’t have authors come to their school or library and see how excited they get about it,” he says. “It’s really cool, really nice.”

On Thursday, OHora will visit Eastern Lancaster County Library, Lititz Public Library and H.C. Burgard Elementary School in Manheim. His visits to the two libraries are open to the public.

During his visits, OHora says, he gives a PowerPoint presentation about his work that includes pictures of himself when he was a kid and the drawings he made at that age.

He says there is usually at least one child in the audience who he can immediately tell is determined to be an author, illustrator or both. He says he tries to give those particular kids as much information and encouragement as possible.

“They might bring drawings with them, or they might bring stories they wrote,” OHora says. “I just had a kid; this kid, Santiago — I even remember his name — he brought a binder full of pretty amazing stories, totally finished, totally drawn out. And he was so young, his mom wrote the words for him.

“But they were really good, like worthy enough to try and steal some of them,” he says jokingly.

OHora, the oldest of five siblings, says he grew up in Massachusetts in a household in which his parents, for religious reasons, forbade televisions and radios.

Because his school didn’t have a library, he says, he became intimately familiar with the neighborhood bookmobile. Also, his father regularly took him and his siblings to the local library.

“We’d go to the library every Saturday, and we’d load up with as many books as we could carry out of there,” he says.

Not surprisingly, he became an avid reader. OHora says a book that had a seismic impact on him when he was a child was “The True Story of the Three Little Pigs” by author Jon Scieszka and illustrator Lane Smith.

“The artwork was amazing,” he says. “It was subversive and very funny. That was like a lightning rod moment. That was when I decided this is what I want to do.”

As well as creating children’s books, OHora also does illustrations for publications like The New York Times and The Atlantic, along with the occasional album cover.

He says he wrote his first children’s book when he was 33 or 34, but it took four or five years until he was able to get a book published.

“It’s a very opaque business, and I didn’t know what I was doing,” he says.

A publisher eventually told him the company was going to take a pass on the book he submitted but wondered if he had anything else.

OHora decided to write and illustrate another book to submit. His wife told him to write about something he knew. OHora snores, so he wrote “Stop Snoring, Bernard!” which became his first published book.

“She had a long list of annoying things I do that are all perfect for characters,” OHora says. “All my faults are going to be on the page at some point. It’s a long list. I have a lot of material to work with.”

OHora doesn’t just rely upon himself for inspiration. One of his sons inspired “No Fits, Nilson!” after he threw a tantrum in a grocery store, and his other son helped inspire the character of Momo.

“When he was really little, he didn’t say much,” he says of his son. “He was always observing. He was a little mysterious and he had big eyes, so Momo was sort of a spirit animal for his personality.”

OHora, whose drawings are bright and colorful, says he always paints with acrylics.

“It’s very forgiving,” he says. “I like pushing the texture of the paint around. If I come up with a good color, it’s kind of like playing with frosting. I find myself drooling over a good color.”

Perhaps he should ask for partial payment in candy bars.

• What: Presentation by Zachariah OHora, whose book “My Cousin Momo” is the focus of the One Book, Every Young Child campaign.