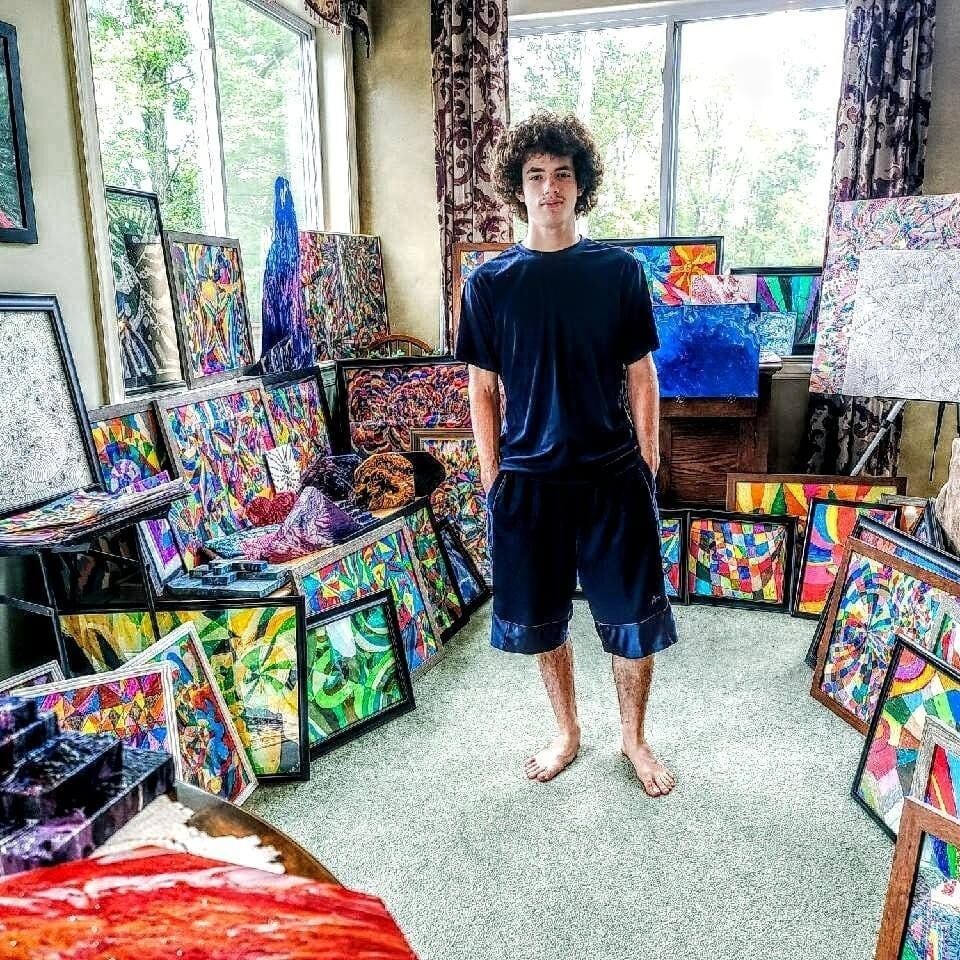 Manheim Central teen artist Joe Roach stands among some of his pieces of artwork. 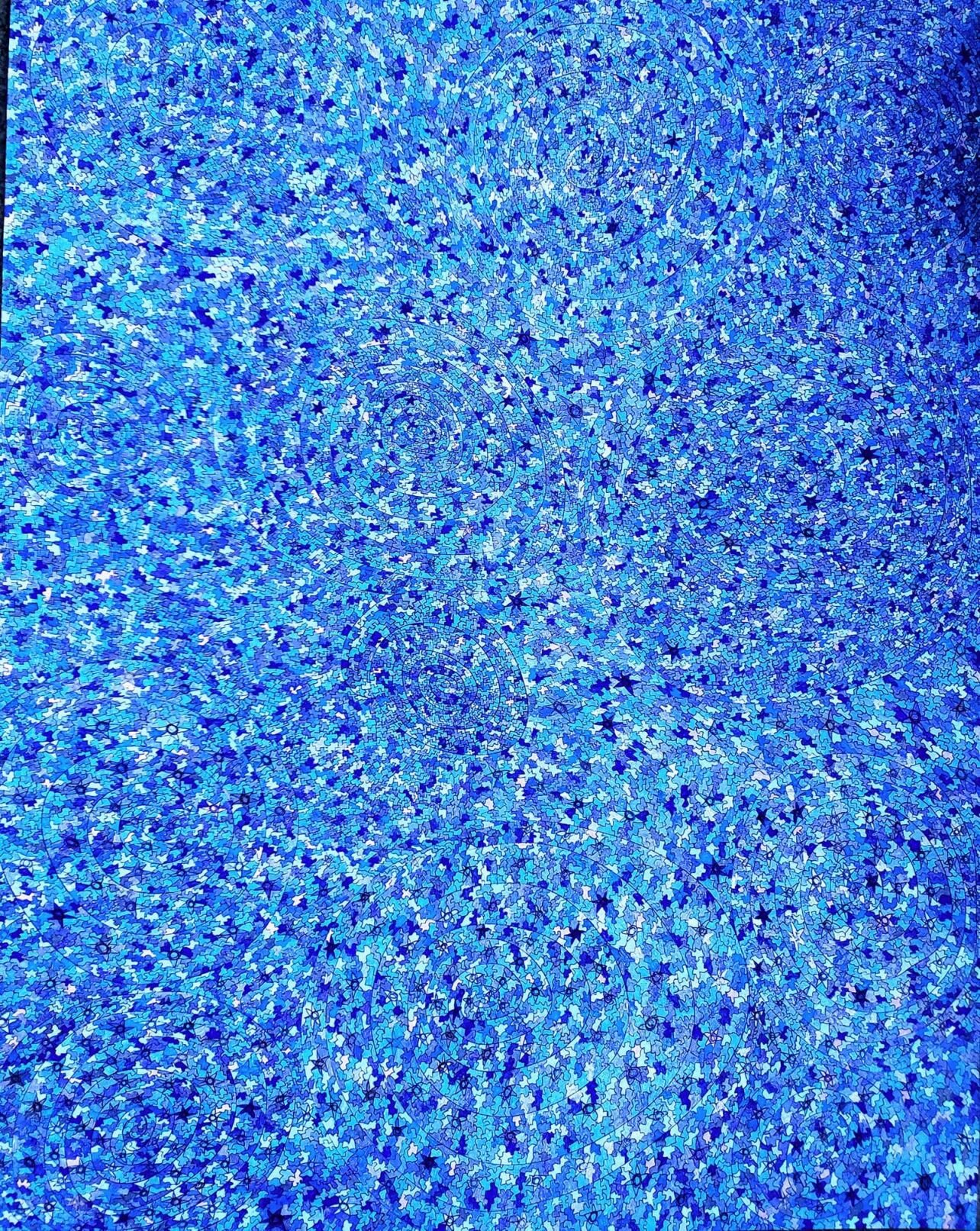 "Celestial Dream," seen above, is one of Joe's favorite pieces. He says it "feels like a puzzle of the brain and inspired by the heavens." 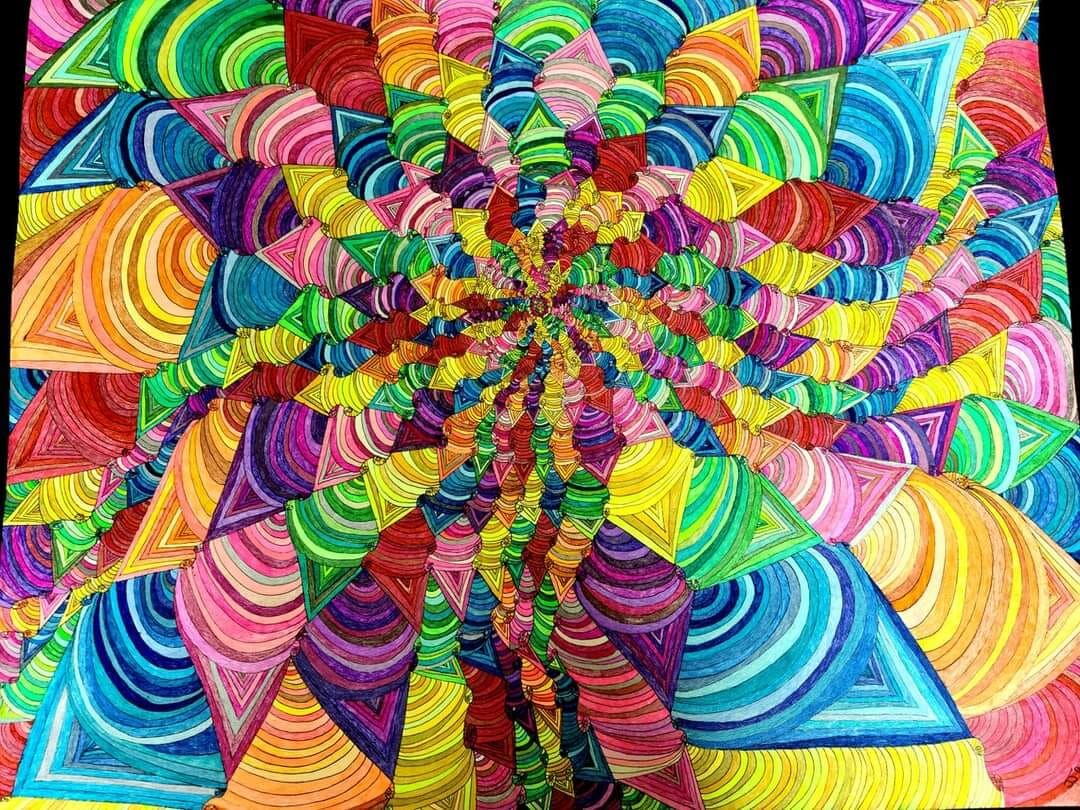 The intricate, detailed lines and vibrant images make up "Mesmoreye" by J.J. Roach.

In art, the Rule of Thirds suggests artists find greater balance in their compositions by arranging them in thirds, rather than centering them.

Joe Roach has been told he achieves this visual balance without even thinking about it.

When the 17-year-old from Manheim sits down to create one of his intricate, abstract designs, whether it’s the detailed sea of blue of “Celestial Dream” or the colorful, mesmerizing and vibrant “Mesmoreye,” he says he uses his autism diagnosis as a superpower. He says his brain’s different way of computing allows him to hyperfocus on detailed patterns.

Joe — who signs his art as J.J. Roach, after his full name Joseph James Roach — says that being on the autism spectrum gives him an ability to focus that others don’t have.

The incoming junior at Manheim Central High School will display his work at Hershey Gardens’ Gardens Cottage on Saturday, July 31, and Sunday, Aug. 1, from 10 a.m. to 4 p.m. He will be the youngest artist ever to exhibit at the gardens.

Joe was diagnosed with severe attention deficit hyperactivity disorder at birth, and autism when he was 5 years old.

Growing up on the autism spectrum presented many challenges for Joe. Joe’s mom, Carol Roach, recalls that when Joe was younger, he would run away and hide from his parents.

“He started out, we didn’t know if he’d be able to read and write,” Carol says. “He was so hyper, so unfocused, and now he’s reading and writing, and he’s doing amazing artwork.”

It wasn’t until Joe became a teenager that he developed an interest in art. While attending Manheim Central Middle School, he remembers that he would just stand at a table and scribble.

But one day, Manheim Central art teacher Julie Hibshman showed the class a picture of the yin yang symbol, a circle divided in halves by a curved line, with one half being white and the other half being black. There’s also dots of the opposite color in each half of the circle. Hibshman showed the class the yin-yang symbol and told students to interpret what they saw.

“He brought home this picture that was astonishing,” Carol says. “When we saw that picture, we knew we had something special there.”

Joe’s interpretation of the yin yang was elaborate — a prequel to intricate, abstract designs yet to come. His abstract yin yang featured black and white stripes resembling a zebra’s hide, and several scattered dots, not just the two seen on a traditional yin yang symbol.

That’s when Carol says she realized if her son really keeps working on art, doors could open. And what may have started out just as scribbles has now evolved into intricate, abstract designs. Joe says he felt supported not just by his parents, but by Hibshman at school, too.

“Julie Hibshman was kind to me unconditionally even when I would do nothing,” Joe said in an email. “She gave me a booklet to start little drawings and encouraged what she saw. She changed my life and gave me a great interest in art.”

As Joe would bring his art projects home, Carol and her husband, Jack, would buy frames and frame his artwork. Framing his artwork encouraged him to pursue art more, and it gave his parents a sense of hope.

“Whatever it is that sparks your child’s interest, run with it and grow with it,” Carol says. “Just because it looks elementary in the beginning, most autistic children can take something elementary and turn it into something super awesome.”

‘Art as a superpower’

Joe sees the positive influence of his autism.

“A huge misconception is it’s a negative,” he said in an email about his diagnosis. “If you find your gift, you can soar. This takes encouragement from school, home and friends. Really, it’s what everyone needs.”

Joe, who is the youngest of four siblings, has the support of his family. Carol says that she’s most proud of how far Joe has come.

“There’s too many autistic children to not find their superpower,” Carol says. “We look at Joey’s art as a superpower.”

When he sits down to draft one of his elaborate, detailed designs, he senses a feeling of healing and happiness because he loves the end result.

“Being creative gives me peace and helps others,” he said in an email.

Mulberry Art Studios in Lancaster city was going to do a showing of Joe’s art in April 2020, but then came the COVID-19 pandemic. Joe thrived during the lockdown and was able to take his artwork to the next level.

“His art blossomed during the COVID lockdown,” Carol says.

The gallery rescheduled his show for April 2021, which gave Joe a year to grow and develop his craft. Later, he received a commission to create more than a dozen pieces of art for Oven Industries in Camp Hill. In June 2021, Oven Industries hosted Joe’s second showing: “Night of Entrepreneurs, featuring J.J. Roach.”

The upcoming exhibit at Hershey Gardens will be his third show.

Joe describes his style of art as “intricate geometrical abstract,” which, he says, is very time-consuming. He doesn’t use special tools or reference existing patterns; what appears on the canvas just comes from his mind.

“I do not use any measuring equipment for lines or for size,” Joe said in an email. “My mind just shows up on paper. The poured paint is a welcome expression after spending hours on intricate lines.”

Nature, plants, space and sky inspire Joe’s work, and he says that his favorite artist is Vincent Van Gogh. Joe’s favorite original piece, “Celestial Dream,” could be a companion piece to Van Gogh’s eternal “Starry Night.” Joe says “Celestial Dream” “feels like a puzzle of the brain and inspired by the heavens.”

Joe says that his most intricate work can take weeks or even months to complete. He uses pens, paints and oil pastels to create his art.

His pen-based designs start with smaller, intricate shapes that appear to form together to create a larger, more elaborate design. Using outer space and galaxies as an inspiration, Joe also creates abstract pour art, in which he pours oil-based paint onto a canvas to create a swirling effect.

Joe will enter 11th grade at Manheim Central High School in the fall, and he plans to continue pursuing art post-graduation. His goal is to be able to make a living with his art and create works of art that inspire others.

“I have a passion to see others find their passion – regardless of where you are in life, with or without being on the spectrum,” Joe said in an email. “I want to bring people together and cause joy through my work.”

'All the things that you want kids to be doing': StoryWalk experience adds new dimension to libraries

Libraries are generally quiet places, so it’s not very surprising that Mailyn Dosh, 6, and h…

A look at 3,500 roses at Hershey Gardens, now in peak bloom [photos, video]

The roses at Hershey Gardens are in their full glory.

Tonight, the Long’s Park Summer Music Series will bring live music back to the park for the …

What: J.J. Roach Art Exhibit and Sale at Hershey Gardens.

Cost: The cost to attend the exhibit and sale is included with Hershey Gardens admission.

I recently saw a TikTok video of a woman from a wildcat sanctuary. As she pressed a beautiful gray cat to her face, she asked in a matter-of-f…

This Lancaster County Navy vet was paired with a service dog; here's the nonprofit that made it happen

McCormick & Co. is recalling certain batches of some of its popular seasoning blends, including Italian and Buffalo ranch seasonings, beca…

An internationally renowned artist whose work has been displayed in Paris, Rome and Beirut has an exhibit on display at a Lancaster city galle…

Obstacles and walls loomed in the distance of the American Ninja Warrior course in Tacoma, Washington. For Ivan King and Paul Fisher, finally …

Quite often to outsiders, Lancaster can be the brunt of many jokes.

Hershey Gardens plans to bring back Bug-O-Rama and — for the first time —  host the annual Penn-Jersey District Rose Show this September.