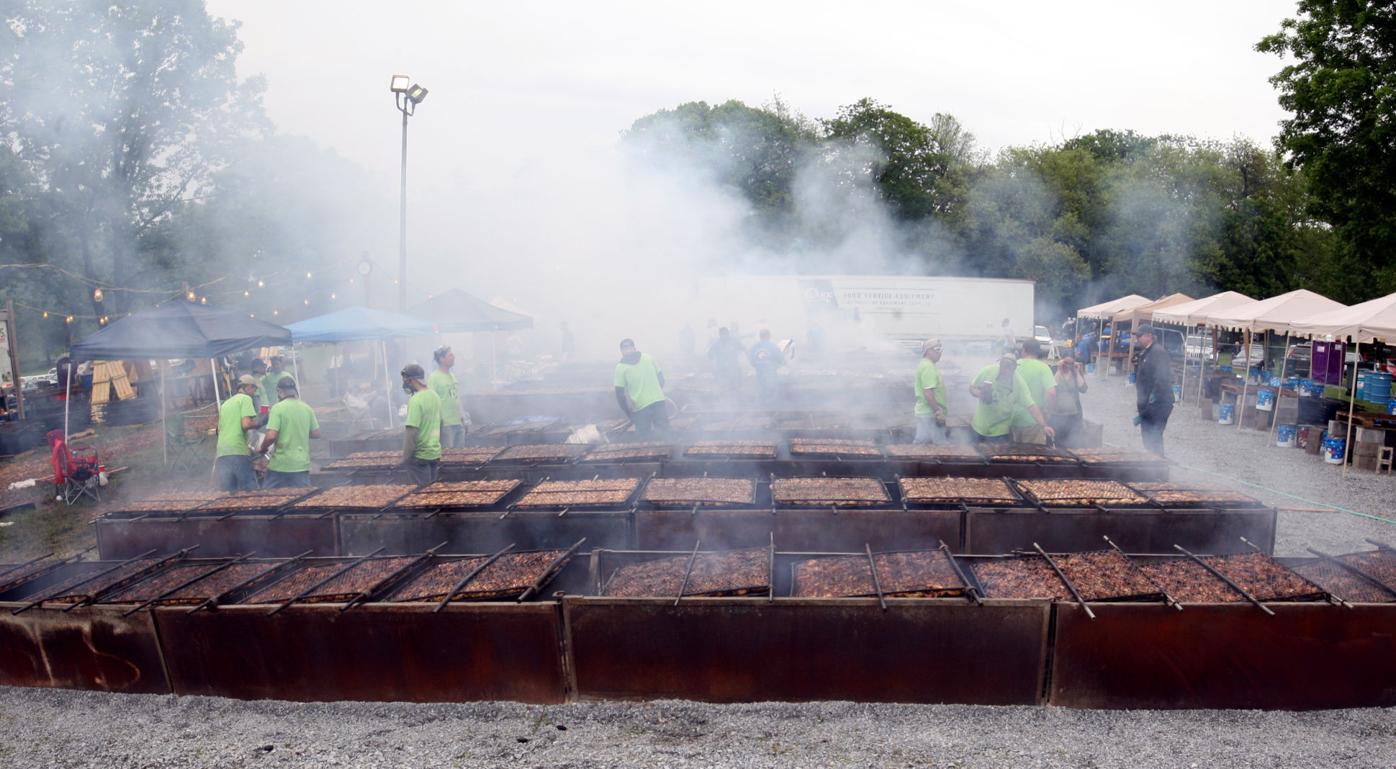 The pits fill the air with smoke and a fine aroma of chicken during Sertoma Club of Lancaster's 64th annual chicken barbecue at Long's Park in Lancaster on Saturday, May 21, 2016.

To say Stephen Olin is dedicated to working the annual Civitas Lancaster Chicken Barbecue, formerly known as the Sertoma Chicken Barbecue, would be like saying they serve “some chicken” at the event. It’s an understatement.

“As a rookie, you’re always working in the pits, but that’s all I wanted to do,” says Olin, the group’s longest active member.

As a club veteran, Olin could seek a cushier job during the barbecue. But Olin says he loves the camaraderie and hard work that goes into working the barbecue pits. For 40 years, he was a pit captain, heading a team of 8-10 other volunteers. This year, Olin will act as the assistant sauce man, spraying chickens with the club’s signature barbecue sauce.

Olin says he’s probably personally grilled about 80,000 pounds of chicken during his more than four decades in the pits and has worked barbecues on 95-degree days and on 40-degree days in a foot of mud.

Olin retired from Penn Medicine Lancaster General Health as the associate director of the residency program in 2015, but continues working with the organization in its casual employee category. He says when he was working full-time, he’d regularly be awake from 5:30 a.m. on the Friday before the barbecue until 8 p.m. on the Saturday of the barbecue. Along with the camaraderie and fun environment, Olin says lots of Mountain Dew, Gatorade and coffee helped him to stay energized during the marathon event.

For Olin, the event is a family affair, too. His wife works in the assembly area putting dinners together, and his son Jay has joined him in the pits. When his daughter Hillary turned 16, she became the first woman to ever work in the pits.

Olin is so dedicated to attending the barbecue he once flew to Los Angeles for his son’s graduation from the University of Southern California and, after the ceremony, flew home and immediately went to Long’s Park at 3 a.m. to help light the barbecue pits.

Due to complications arising from the COVID-19 pandemic, this is the first year the barbecue will be held in the fall. Olin says they plan on bringing the event back to its usual date in May next year.

The barbecue traditionally takes place on the third Saturday of May, which is the same day as the Preakness Stakes thoroughbred horse race. Olin says when he first began selling tickets to the barbecue, a number of people said they couldn’t make it because they were going to the Preakness, so he petitioned the racing commission to change the date of the famous horse race.

“I wrote a letter on Sertoma Stationary to the racing commission asking them if they would consider changing the date of the Preakness because it conflicted with the world’s largest one-day chicken barbecue,” says Olin, of Lancaster Township. “I never got a response, but at least I tried.”

If that’s not enough dedication, Olin also once dressed as Tinkerbell during one of the club’s fundraising events. Olin says they used to write and perform chicken-themed spoofs of popular musicals or movies such as “Grease,” “Peter Pan” and “Jurassic Park.”

Many changes have happened during the barbecue’s 68-year history.

In the early years of the event, Olin says the club would only cook about 5,000 chickens. Due to the change in time and the event’s hiatus because of the COVID-19 pandemic, they’re cooking less chicken than they have in previous recent years, but they still plan on serving 15,000 chicken dinners.

This year, according to Price, about 8,000 to 10,000 cars will pass through Long’s Park. Traffic will enter at the upper entrance of the park and exit at the lower exit across from The Crossing Shopping Center. Before the group figured how to handle the traffic, cars would routinely wait in a line that would be backed up to the Franklin & Marshall College campus.

Olin says the first barbecue only netted about $500. Price says recent barbecues have raised about $100,000, with 70% of that money going to Long’s Park upkeep.

This year’s funds will go to new basketball and tennis courts. In previous years, money raised during the barbecue helped create the park’s wetlands area, the playground, the fence, the enclosed the park, the filtration system in the pond, the petting zoo and its upkeep, and even contributed to the park’s iconic amphitheater.

According to Olin, the money also goes to trimming the park’s thousands of trees and replanting trees. During one bad thunderstorm in May, Olin says the park lost 80 trees.

“There are always people in the park,” Olin says. “They can stay the whole day and have a wonderful time.”

Additional funds from the barbecue go to organizations such as Compass Mark, the Blessings of Hope Food Bank and the Salvation Army.

Olin says the best part of the day, after lighting the pits, is finally getting to the end.

“Everybody is like, ‘OK, we don’t have to do anything until next year,” he says.

But he’s already planning on working the 2022 barbecue.

Cost: Advanced tickets are $10 and can be purchased at civitaslancaster.org. Tickets purchased during the event are $12.