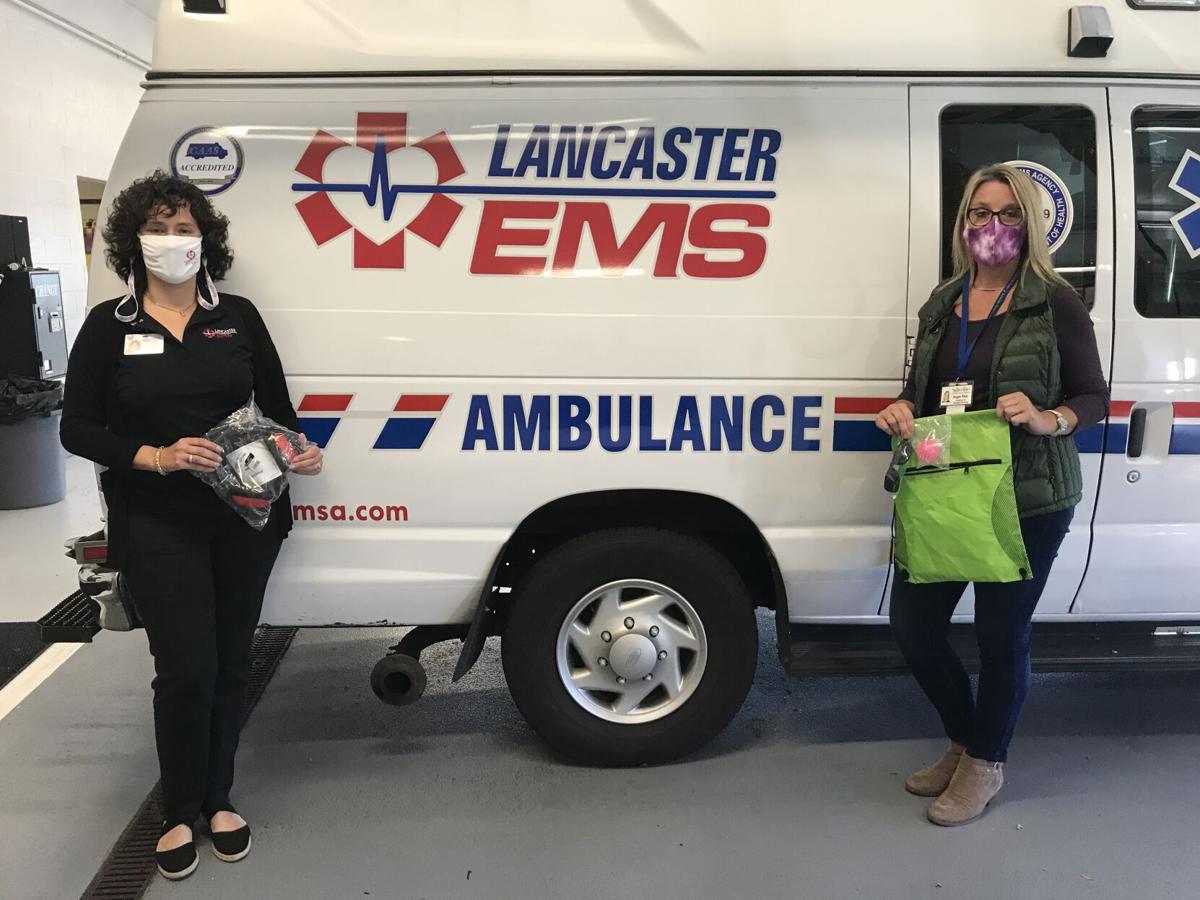 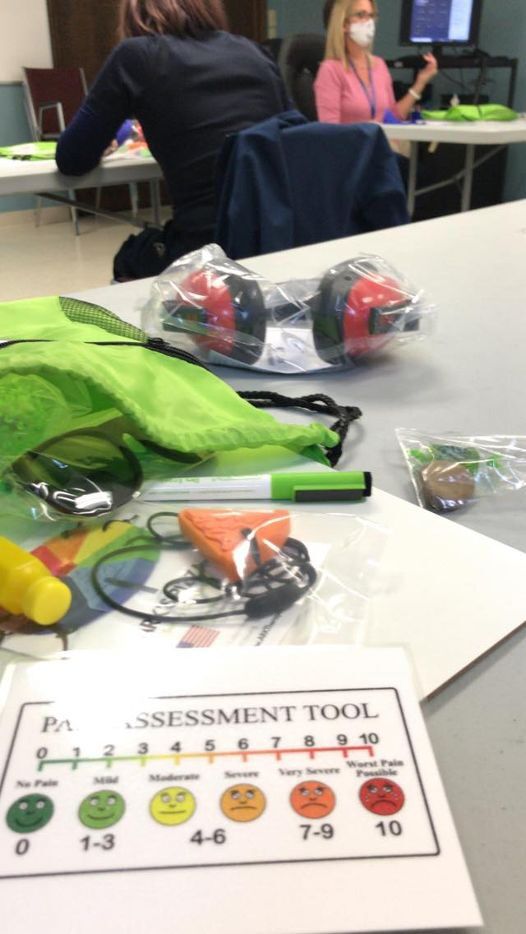 Lancaster EMS staff members carry bags with tools that can help de-escalate tense situations and calm individuals with special needs and sensory processing disorders. These can include noise-canceling headphones and fidget spinners. 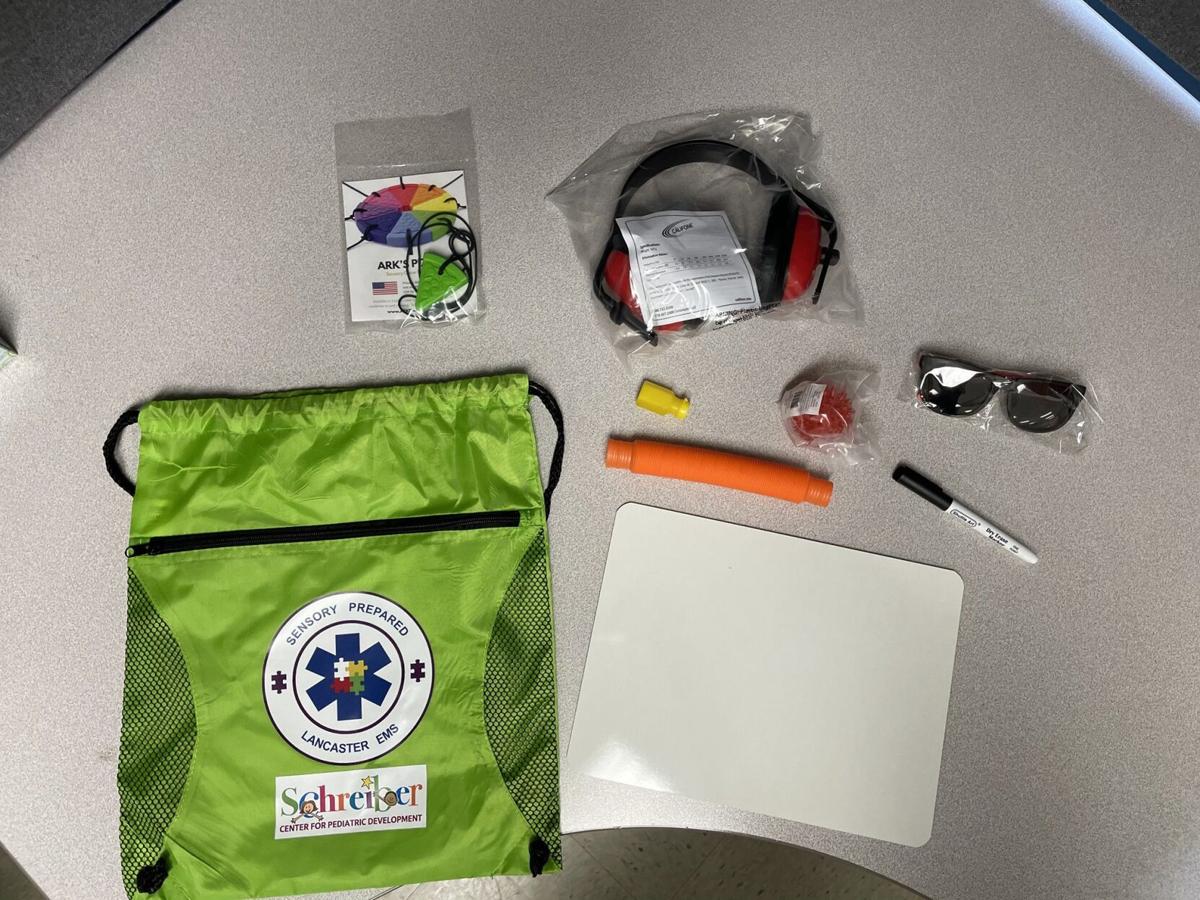 She also carries an extra bag with tools of a different kind: sunglasses, headphones, bubbles and fidget spinners. As a mother of a 5-year-old boy diagnosed with autism, she knows firsthand that children with special needs and sensory processing disorders require extra care.

The tools in Griffith’s bags can help de-escalate tense situations and calm individuals with special needs and sensory processing disorders.

“As a mother, it’s my worst fear for my son to be in a situation where somebody thinks he’s being noncompliant or trying to act out when in reality it’s none of that,” says Griffith, 27, of Lebanon. “He just doesn’t understand what he’s being asked to do.”

Lancaster EMS recently partnered with the Schreiber Center for Pediatric Development to provide tools and training to EMS providers so they can better aid those with sensory processing disorders.

“For me, that includes knowing that the first responders I work with are going to be able to have the education and the tools to deal with this,” Griffith says. “Not just only for my son, but for everybody.”

One day, Griffith says, her employer inquired about the contents of her extra bag. This conversation started a larger discussion about how Lancaster EMS could provide better care for people with sensory processing disorders.

Locally, there has been heightened conversation about how first responders interact with people with special needs or mental health issues since the September death of 27-year-old Ricardo Munoz, a man diagnosed with bipolar disorder and schizophrenia.

Munoz, who was wielding a knife, was killed by a Lancaster city police officer who responded to the emergency call. No charges were filed against the officer, and district attorney Heather Adams said the use of force was justified.

While Griffith and others involved with creating the sensory bags declined to comment on Munoz’s death, they expressed commitment for finding a way for emergency responders as a whole to better serve people with sensory processing disorders.

Griffith worked with Angela Rice, director of therapy services and an occupational therapist, at the Schreiber Center for Pediatric Development, to develop the contents of the bag and training methods that would complete the program. The Schreiber Center works with children from birth to age 21 with autism, cerebral palsy and sensory processing disorders. Griffith’s son receives his therapy there.

Schreiber Center received a grant for $5,000 from the Clark Family Foundation to assemble 125 nonreusable sensory bags for 30 EMS ambulances to take on emergency calls. Lancaster EMS is the first EMS agency in the state to develop these bags specifically for autistic and special needs support, says Marisa Seubert, marketing and development coordinator for the Lancaster EMS.

Griffith and Rice decided on eight items designed to target different sensory systems. The bags include noise-canceling headphones, fidget spinners, chewable jewelry, stress balls and sunglasses to help decrease anxiety, bubbles to provide a distraction, a white board and marker for written communication and a pediatric pain scale so children can point to the pain level they’re experiencing.

Pennsylvania Farm Show 2021: When it starts and how to watch

“Sometimes these kids have visual sensitivity so we use sunglasses to help them decrease their anxiety and eliminate environmental distractions,” Rice says. “It makes them feel like things have gone away and they are safer — almost like they’re hidden behind something. And, of course, we had to have fidgets. Fidgets will help you decrease anxiety and help you concentrate.”

A white board and marker helps with communication. “Sometimes kids on the spectrum aren’t able to tell you what they’re feeling because they have some processing disorders and speech and language delays,” Rice says. “So we always say if speaking doesn’t work, try writing or drawing.”

All items in Griffith’s bag are things she uses to help her son calm down when he becomes overwhelmed. Her son gravitates to different things at different times. For example, Griffith says, if they’re in a crowded store, he gravitates to the noise-canceling headphones. The headphones help calm him down in a noisy atmosphere, which Griffith says is a common need for children with sensory processing disorder.

Once Rice and Griffith settled on the contents of the bags, they needed to come up with instructions and training for first responders.

“What I did at the training was basically just go over some tips and techniques for the workers if they are called to the scene and there’s a child with sensory disorders,” Rice says about her experience training EMS providers.

Rice says that one of the unique challenges that EMS workers face is the fast response time and a need to react quickly. Still, she says, patience is important.

“You have to be patient and calm,” Rice says. “We talked a lot about personal space and we talked about asking permission to come into someone’s personal space. You have to let them know what you’re doing instead of just like grabbing them, because kids, especially those with sensory and autism, don’t like to be grabbed.”

Rice also stressed the importance of speaking slowly and approaching children on their level — not looming over top or startling them.

Nonverbal cues are another important element for EMS responders to pay attention to.

“It’s good to read the scene to try to pick up on signs,” Rice says. “If you pick up on signs sooner you might be able to de-escalate. So if you see (a child) starting to bite themselves or if you see them starting to scratch, you can use a different approach to try to avoid them getting to the next level where the child starts screaming and hitting.”

Rice says she realized the situations can become overwhelming, but with proper training, it’s possible to de-escalate situations before they become traumatic.

Lancaster EMS plans to implement the sensory bags early this year. That includes training EMTs on using the sensory bags, putting deescalating techniques in place and coordinating with emergency room nurses at Lancaster General to provide education about the sensory bags to facilitate a smooth transition of care.

A special sticker also will be placed on ambulances equipped with the sensory bags to alert parents and guardians that the responders are trained to handle situations involving people with sensory processing disorders.

Your home butter sculpture could win a prize during PA Farm Show Butter Up! contest

Griffith continues to use her own personal supply of items from her bag on calls.

“I actually had a patient the other day that I was able to use that bag with, and the mom was beyond thankful for that and we were able to de-escalate a situation pretty rapidly,” Griffith says. “That was absolutely what that bag was built for. It was amazing to see another parent be able to relax and take a deep breath and know that we were able to help.”

How Lancaster performers found ways to reach people in 2020, from online concerts to theater shows

Kid-friendly activity: Make seed balls for gifts, or for your own garden

Seed balls are a great at-home activity for gift-giving or to keep for your own garden.

A Cocalico School District fifth grader is one of 13 winners of the 24th annual Drug-Free Calendar Contest, sponsored by the Pennsylvania atto…

EPHRATA POLICEBURGLARYWEST COCALICO TWP.: Kim Dragan, 63, of Reading, was charged with burglary after she ran from police when officers arrive…